Monkeybrain Comics has announced a wave of five new titles in celebration of their second anniversary as a publisher. Full details are below, and stay tuned to Comicosity for more information on the projects!

MONKEYBRAIN COMICS ENTERS ITS SECOND YEAR OF OPERATION WITH A RAFT OF NEW TITLES IMMEDIATELY AVAILABLE TO DOWNLOAD TODAY! 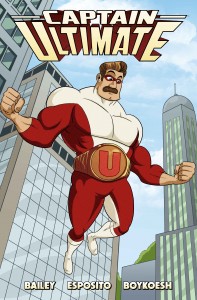 Monkeybrain Comics launched on July 2, 2012 with six titles and a simple dream: to make good comics. Twelve months and more than two dozen new titles later, they are well on their way to making that dream a reality, with new digital releases on comiXology every week, and print collections coming out from publishers like IDW, Image, and Dark Horse. The Onion AV Club has named Monkeybrain Comics the “premier destination for high-quality digital comics,” and IGN has said that Monkeybrain is “the company that seems to be doing [digital comics] best.” Monkeybrain titles were frequently cited in critics’ year-end surveys, and MASKS & MOBSTERS was named the Best Digital Series of 2012 by USA Today. And in 2013, Paul Tobin and Colleen Coover received a total of four Eisner nominations for their work on BANDETTE.

“We have been overwhelmed by the amount of support we’ve received from readers and creators alike in our first year of operation,” co-publisher Allison Baker said, “and we can’t wait to show everyone what we have planned for our second year.”

To celebrate the start of their second year of operation, Monkeybrain Comics is releasing a raft of exciting new titles at Comic Con International in San Diego, all of them immediately available for download on comiXology today.

About Monkeybrain Books and Comics
Launched in the summer of 2012 by New York Times-bestselling writer Chris Roberson and TV commercial and film producer Allison Baker, Monkeybrain Comics was designed to be a home for quality creator-owned comics made available in digital format via the Comics By comiXology platform. The Onion AV Club has named Monkeybrain Comics the “premier destination for high-quality digital comics,” and IGN has said that Monkeybrain is “the company that seems to be doing [digital comics] best.” Monkeybrain titles were frequently cited in critics’ year-end surveys, and MASKS & MOBSTERS was named the Best Digital Series of 2012 by USA Today.

Monkeybrain Comics are available for purchase via the Comics by comiXology platform on phones, tablets, digital readers, and computers, and will now be available for the first time in print collections.

About Chris Roberson and Allison Baker
New York Times bestselling writer Chris Roberson is best known for his Eisner-nominated ongoing comic book series iZombie (co-created with artist Mike Allred), his modern fantasy series Memorial (co-created with artist Rich Ellis), the Fables spinoff Cinderella mini-series, and his work on Superman, Star Trek/Legion of Super-Heroes, and Elric: The Balance Lost, all of which are available for digital download at http://cmxl.gy/CRoberson. His favorite food is meat, he’s allergic to wheat, and his favorite cocktail is a caipirinha, the national drink of Brazil.

Allison Baker has worked in feature film and political media production for over 14 years, while also managing the day-to-day operations of Chris Roberson and Monkeybrain Books. She likes the color pink, enjoys a challenge and is allergic to being bored.

Chris and Allison met at a Ben Folds Five show in 1997, got married in 2000, started their own business in 2001 and had a baby girl in 2004. All three currently live in Portland, Oregon with a lot of books and their two cats, Bubbles and Blue.

Check us out at monkeybraincomics.com!