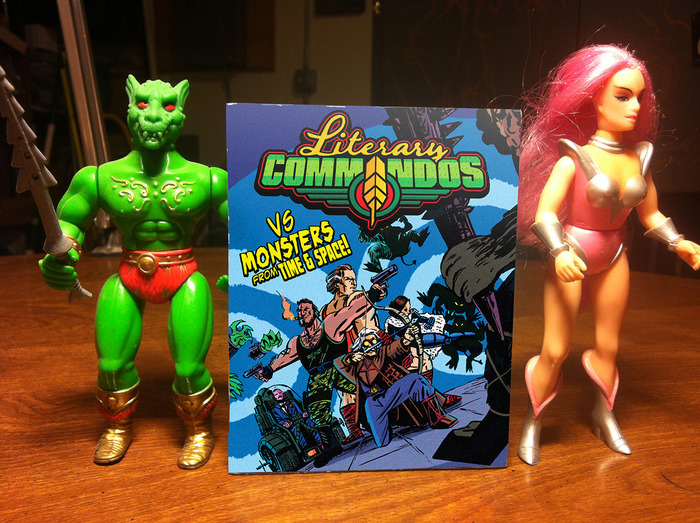 Tim Seeley, Steve Seeley & Michael Moreci have launched a Kickstarter for Mini Comics Included, a new project focusing on comics sized similar to the ones included with action figures in the 80s. 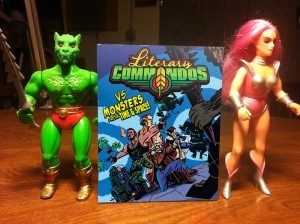 March 4, 2013 – From the creative minds behind Hack/Slash, Revival, and Hoax Hunters comes an all-new original series of comic titles inspired by 1980s toys, cartoons, and comics. Mini Comics Included was created by Tim Seeley, Steve Seeley, and Michael Moreci as a way to bring back the fun, exuberant storytelling that played a vital role in instilling a love for comics that survives in each creator to this day. To fund the production of six original titles—all sized to the dimensions of comics that came with toys such as He-Man and Starriors—Mini Comics Included is running a Kickstarter drive that’s packed with unique incentives and inventive opportunities to help bring this project to fruition.

Joining Seeley, Seeley, and Moreci are a group of talented artists: Brent Schoonover, Sean Dove, Clint Hilinski, and Paul Tucker. Each brings a unique style and aesthetic that is perfectly suited to the title they’re contributing to.

“Mini-comics got us me into comics! The spirit of fun, and unlimited imagination is what kept me so engaged in the medium that I never gave it up. We’re infusing that spirit into these titles,” said Tim Seeley.

The six titles are:

Colt Noble and the Megalords (written by Tim Seeley, art by Clint Hilinksi): The sequel to the cult hit Image Comic’s one-shot! Mareea, beautiful and hard edged weapons trainer thinks she’s finally getting a romantic date with COLT NOBLE, hero of PLANET SOL! But what she actually encounters DUPER, an evil alien DUPLICATE!

Dead Star Divas (written by Tim Seeley, art by Sean Dove): The DIVAS are the greatest bio-ball team of all time! But their angry opponents have sabotaged their transporter! And now they’ve been sent to a backwater world used as a dumping grounds for genetic experiments gone wrong!

When Poe and his evil organization The Raven steal a very important time traveling device, The Commandos head to action to stop them. Will they able to stop him in time? Pun intended!

The Omega Family (written by Michael Moreci and Steve Seeley, art by Paul Tucker): The Omegas are the last human family on a very different Earth—one where monsters, wild animals, and all manner of strange beasts rule the land. When a meteor crash lands and strange species threatens the entire planet, the Omegas must act!

Prime-8s (written by Michael Moreci and Steve Seeley, art by Brent Schoonover): They are the most advanced fighting force known to man, sworn to protect the Earth from mad scientists, hyper-evolved animals, and intergalactic threats. The Prime-8s are called into action—to Las Vegas—after secret NASA documents are stolen. What they discover is a Cold War plot involving samurai, a cyborg bear, and more!

Superbeasts (written by Tim Seeley, art by Clint Hilinski):  The city of Frankenvania is home to monsters from all across the Mulitiverse!  And the only force able to protect them from hateful monster hunters is the superhero team SUPERBEASTS!

“While Mini Comics Included is a special project for everyone involved, we also think it’s filling something that’s missing in comics, something people want,” Moreci said. “We’re infusing these stories with pure fun, imagination, and excitement—essential qualities of comics that are too often absent these days.”

Incentives include toys, of characters that appear in the comics, from both renowned toymakers and the Seeleys. Ben Spencer is contributing his creation, Galaxxor, ManOrMonster Studios contributes Bognar, and Bigmantoys is adding Treegar to the mix. There’s also original art, fan club packs, and animation cells available.

“Apparently, Michael Moreci, Steve Seeley, and Tim Seeley are making comics aimed directly at me, which I appreciate. Well, I suppose, they could also be making them for people LIKE me. Not just me PERSONALLY. But until I hear differently, I’m going to assume that this is all for my benefit, and will be in line on day one to back the “Mini Comics Included!” Kickstarter. Because, based on what little I’ve seen so far, I NEED to see the rest!”—Chris Roberson (Masks, iZombie)

Find out more by visiting the Kickstarter site: