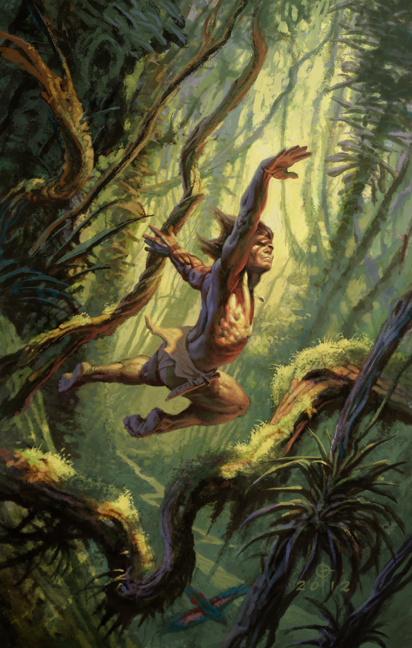 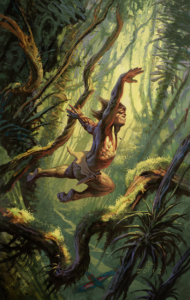 The one hundred and forty four page graphic novel will be authorized by ERB, Inc. through Sequential Pulp’s distribution arrangement with Dark Horse Comics. The book will be designed as an anthology collecting the twelve loosely connected short stories written by Edgar Rice Burroughs chronicling the life of his most famous character, Tarzan of the Apes. All the events of the original work take place within chapter eleven of Tarzan of the Apesbetween Tarzan’s avenging of his ape foster mother’s death and his becoming the leader of his ape tribe. The original stories ran in Blue Book magazine from September 1916 through August 1917 prior to the book’s publication in 1919.

Writer Martin Powell will helm the graphic novel. Powell is well known for his work as the author of hundreds of science fiction, mystery, and horror stories. He has worked in the comic book industry since 1986, writing for Marvel, DC, Malibu, Caliber, Moonstone, and Disney, among others, and has been nominated for the coveted Eisner Award. He is also a respected and award winning author of children’s books, and frequently contributes prose for many short story anthologies. He resides in Saint Paul, MN.

Along with Powell, Sequential Pulp is bringing a veritable who’s who of exciting illustration talent.  With an amazing cover and specialty art by Daren Bader to exciting story art by Pablo Marcos, Terry Beatty, Will Meugniot, Nik Poliwko, Antonio Romero Olmedo, Mark Wheatley, Diana Leto, Steven E. Gordon, Lowell Isaac, Tom Floyd and Jamie Chase. Each story has been matched up with an artist whose passion and love for Burroughs’ Tarzan and specifically for the story selected will go a long way towards making this one highly anticipated book in the Tarzan canon.

Each story will run twelve pages in length and the book will be in full color. Sequential Pulp is planning a standard trade paperback and a very limited signature deluxe signed edition.

Sequential Pulp is a new imprint and production house whose focus is on publishing graphic novels based on classic to neo pulp of all genres. Its books will include both licensed and creator-owned material.

Founded in1986 by Mike Richardson, Dark Horse Comics has proven to be a solid example of how integrity and innovation can help broaden a unique storytelling medium and establish a small, homegrown company as an industry giant. The company is known for the progressive and creator-friendly atmosphere it provides for writers and artists. In addition to publishing comics from top talent such as Frank Miller, Mike Mignola, Neil Gaiman, Brian Wood, Gerard Way, Felicia Day, and Guillermo del Toro, and comics legends such as Will Eisner, Neal Adams, and Jim Steranko, Dark Horse has developed its own successful properties, including The Mask, Ghost, Timecop, and SpyBoy. Its successful line of comics and products based on popular properties includes Star Wars, Mass Effect, Buffy the Vampire Slayer, Aliens, Conan, Emily the Strange, Tim Burton’s Tragic Toys for Girls and Boys, Serenity, and Domo. Today Dark Horse Comics is the largest independent comic book publisher in the US and is recognized as one of the world’s leading publishers of both creator-owned content and licensed comics material