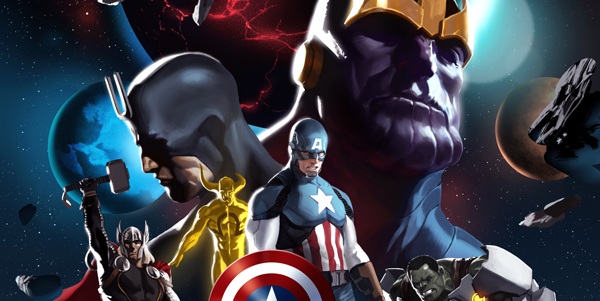 Once a month we check in with Chris Humphries, owner of Alpha Comics in Calgary, Alberta, to find out what the word is on the street. This month we discuss the news coming out of Image Expo, the Green Lantern titles, Infinity and more! Your monthly dose of some good ol’ fashioned Shop Talk is right here!

Aaron Long: Image Expo rocked the news world last week with a slew of new announcements. Any initial buzz for the new titles in the store?

Chris Humphries: So far there has been buzz for all the announcements in general, rather than for any particular project. I have however been keeping my eye online and it looks like people are most excited for Black Science by Rick Remender and Matteo Scalera as well as ODY-C by Matt Fraction and Christian Ward. I already know I’ll be ordering big on these two.

AL: Above and beyond the new titles, Robert Kirkman announced The Walking Dead is going bi-weekly. There has been little negativity regarding the double shipping of this title in the vein of the Marvel double-ship titles, do you feel the fan base is just that devoted to Kirkman’s epic?

CH: Honestly the only people I see complaining about any books “double shipping” are the ones on the ‘net. Not my customers. I have to sometimes wonder if the complaining comes from people who aren’t buying these comics anyway. I think in a market where trade paperback sales are growing, people don’t want to wait. I’ll often hear more casual readers say that they buy collected editions because they don’t want to wait a whole month to read the next part of the story. As a kid I remember when books like Uncanny X-Men would go bi-monthly. It would say so right on the cover. To me, that was exciting. I would only have to wait two weeks for my favourite comic. For Walking Dead fans they are going to get more of what they like. Not one day of the month to be excited for The Walking Dead, but two!

AL: The first month of the Green Lantern titles is in the books, with the second issues by the new creative teams coming in July. Have you seen much of a drop off from the Johns/Tomasi era, or have fans stayed with the series so far?

CH: Overall the Lantern family of books is continuing to keep it’s sales numbers. Fans of Green Lantern have for the most part been picking up the whole line. I’ve seen a couple people drop the main book, but that was the only Green Lantern comic they were getting. The Lantern books have a loyal fan-base.

AL: Last month you mentioned that Infinity was getting some traction. With the event drawing closer and the primary series affected starting to gear up for the event, is the buzz continuing to grow?

CH: Subscriptions for Infinity have been steadily increasing. Right now I’m estimating that it will sell three times the copies that Age of Ultron did. That might seem like a big number but Johnathan Hickman has earned a large readership at Alpha Comics. I also have some event plans that tie-in with Infinity at the store. I’ll be announcing that soon.

AL: Last week saw the release of Avengers A.I., which could be considered somewhat of a niche book in an already heavy Avengers market. What was the reception to the series in the store?

CH: You’re right, AI is a niche book among many Avenger titles. I ordered a lot of issue #1’s and I can see the ceiling of this book is in the neighborhood of Young Avengers.

AL: You nailed the top book of last month with your prediction of Superman: Unchained #1. Same question as always: top book of this month?

CH: I don’t see a clear top comic for July. Justice League should get a big bump on the charts but I think the retailer incentives behind Superior Spider-Man Team-Up could make it number one.