Chris Humphries of Alpha Comics is back with Comicosity for another installment of the monthly Shop Talk! May featured some X-Men talk, but June belongs to Superman! Find out what the scoop is at the shop, and check out alphacomics.ca for a full listing of Phantom Variant covers! 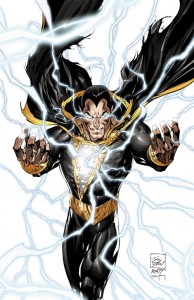 Aaron Long: DC Comics has announced Villains Month to quite a bit of buzz – have people been chatting about the September event at the shop?

Chris Humphries: DC’s Villains month is catching some buzz in the shop. People seem to be really interested in the lenticular covers. Hopefully the comics themselves also deliver excellent stories.

AL: Superman Unchained hit shelves this past Wednesday. With two superstars on the book like Snyder and Lee, are people being drawn back into the Super-titles in your shop?

CH: Lot’s of people picked up Superman Unchained #1 on Wednesday, including people who haven’t been inside the shop before. I can’t see the success of this comic spreading out to the rest of the Superman line, but certainly these people will also be checking out Batman/Superman #1.

AL: Marvel is hitting hard with events this summer, heading from Age of Ultron pretty much straight into Infinity. ‘Event Fatigue’ is a term that is thrown out a lot, yet the issues crack 100,000 in sales often…are you seeing any fatigue amongst your customers or are the events as strong as ever?

CH: I wouldn’t consider Age of Ultron a hit at Alpha Comics. Sales for that comic are less than half of the best selling Marvel comic in my shop. Infinity however already has traction. Lots of people are genuinely interested in Infinity.

AL: The second wave of the Summer of Valiant is about to begin. One year into the Valiant line, are the titles consistent and on readers’ radar or is the Internet buzz the publisher creates not transferring to the reader level?

CH: Valiant has a solid fanbase at Alpha Comics.People interested in Valiant are picking up the comics line-wide. I’m not seeing much for new readers jumping on though.

AL: And now the one you know is coming: crystal ball time! Which book will reign supreme in June?

CH: I’d be shocked if Superman Unchained #1 isn’t the best seller for June.