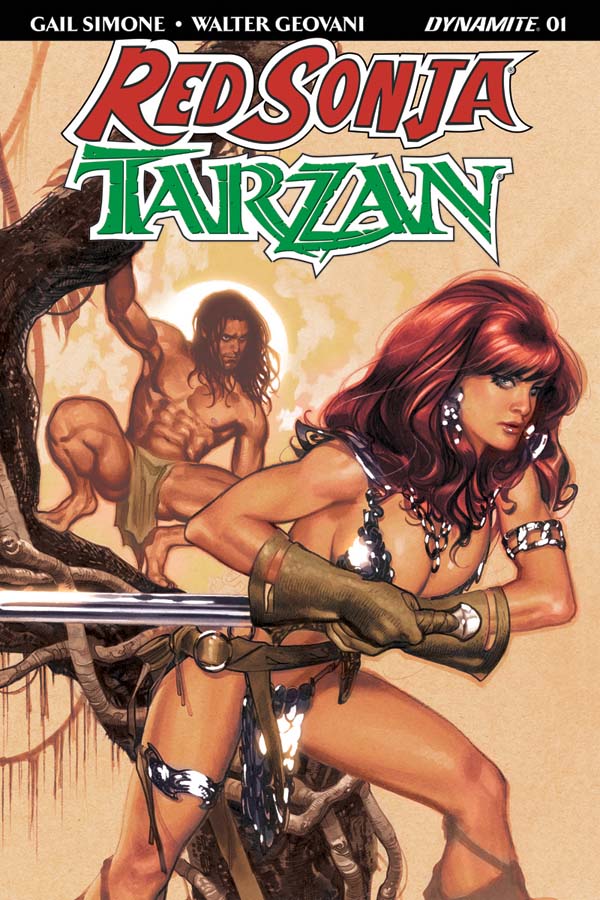 Dynamite Entertainment is proud to announce that the acclaimed Red Sonja creative team of Gail Simone and Walter Geovani will reunite for the first-ever crossover between the Hyrkanian warrior and Edgar Rice Burroughs’ legendary Lord of the Jungle, Tarzan.

Debuting its first issue in May, the Red Sonja / Tarzan series not only delivers high-stakes adventure to genre fans, but provides the fan-favorite writer of Birds of Prey, Secret Six, and Batgirl the opportunity to work with one of her favorite characters for the first time.

“It’s an odd thing about my career, especially being a female writer mostly known for superheroes, but I do get asked a lot to write these incredibly manly characters quite often, and the truth is that I just love them. I like stories that are bloody and sweaty. I love the dark night pulpy stuff. I can’t get enough and it’s a sure way to get me to work on a property,” says Gail Simone.

“Tarzan is the king of them all to me. When I was a kid, I read every Edgar Rice Burroughs book I could find. They had these Neal Adams covers, or Frazetta, or someone equally wonderful. And I just fell into that world in the same way you might fall into Middle Earth. I loved the jungle aspects, the family stories, and I loved how Tarzan had to fend for himself at the start. It was just exhilarating to me.”

Red Sonja / Tarzan #1 unites the iconic heroine of swords-and-sorcery with the quintessential jungle adventurer in deadly conflict with Eson Duul – an evil man whose very name makes the powerful quake with fear. “I wanted a classic-style villain, something that would fit in with an ERB story or a Robert E. Howard story. And what we have is something that is kind of like a Tarzan gone wrong, someone who isn’t content just to dominate; he has to make his targets extinct from the Earth. He’s basically awful, and yet, he’s not completely unlike some real like people with too much power.”

Gail Simone began her writing career at Bongo Comics, home of The Simpsons, and entered mainstream comics with a run on Marvel Comics’ Deadpool. Perhaps best known for her groundbreaking runs on DC’s Birds of Prey, Secret Six, Wonder Woman, and Batgirl, she left an indelible mark on the Red Sonja franchise with the 2013 relaunch of the ongoing Red Sonja series, illustrated by Walter Geovani.

Met with immediate critical acclaim and an impressive sell-out of its 35,000-unit first printing, Red Sonja’s success led to additional projects including Legends of Red Sonja, Swords of Sorrow (a crossover with dozens of Dynamite’s female characters including Vampirella and Dejah Thoris), and Conan / Red Sonja.

Regarding her collaboration with Geovani, Simone says, “Walter’s like me – we both love crossovers, and we feel downright possessive of Red Sonja. When he heard this was coming up, we agreed to put aside another project that we were working on for six months so he could draw this; he just wanted in so badly. Me, I’m ecstatic, because it’s honestly a bit difficult for me to write Sonja scripts for anyone but Walter. He just gets my scripts so perfectly. I adore him! And wait ‘til you see his Tarzan!”

“We are honored and humbled to welcome Gail and Walter back to the fold for this truly epic event,” says Nick Barrucci, CEO and Publisher of Dynamite Entertainment. “Gail’s exceptional talent at bringing out the multiple dimensions of a character — ferociousness and passion, cleverness and resolve – fits so perfectly with this project, I’m surprised that we haven’t published it sooner. We’re also thankful to our partners at Red Sonja, LLC and Edgar Rice Burroughs, Inc. for making this dream team-up a reality!”

Red Sonja / Tarzan #1 is slated for release in May.