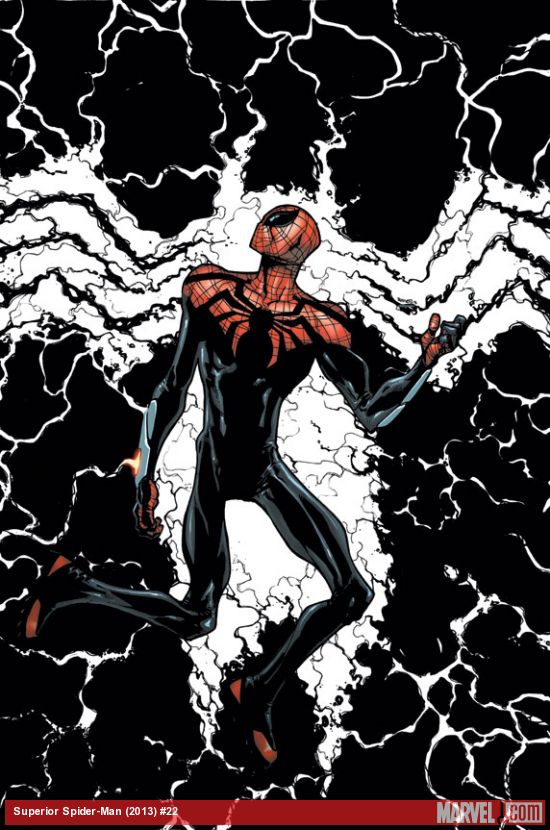 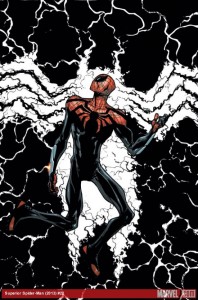 In his first year as the Superior Spider-Man, Doc Ock faced a host of villains from Spidey’s famous rogues gallery, including Vulture, Scorpion, Boomerang and Alistair Smythe. He managed to vanquish them all, but did it by employing methods that Peter Parker would never approve of.

When SUPERIOR SPIDER-MAN heads into its second year, the title character will take on one of the greatest and most dangerous threats that Parker ever had to contend with—and his brutal approach to heroism may have met its match.

Undoubtedly one of Spider-Man’s most fearsome opponents, Venom came as close as anything ever had to destroying Peter Parker’s life pre-Ock. However, there’s a certain irony that the current wallcrawler houses the mind of a “reformed” villain while the symbiote has latched onto a would-be hero.

“This is the current Flash Thompson version of Venom we all know and love,” says Slott. “And this will mark his first real mano-a-mano fight against the Superior Spider-Man.”

Venom and Spider-Man haven’t crossed paths in a while, and as Slott explains, that’s not an accident.

“We’ve actually been saving this up for some time now, carefully keeping Venom and Spider-Man away from each other. Making sure that even when the Avengers and Secret Avengers were together—back when Venom was on the team—that he and Spidey were never in the same room together,” he reveals. “During our big Spider-Island event, if you [were] paying close attention, even with both Spider-Man and Venom playing key parts, they never actually cross paths.

“This throw down has been a long time in the making. And, unfortunately for Venom, it’s taking place now, with a far more ruthless and efficient Spider-Man running around.”

How do these two characters come to blows? Slott won’t say much.

“You’ll have to wait and see,” he teases. “But the inciting incident involves a major threat from Venom’s past who appears to have resurfaced.”

The art on Darkest Hours comes from a SUPERIOR SPIDER-MAN regular, the always-excellent Humberto Ramos.

“Remember, back in AMAZING SPIDER-MAN #654.1, Humberto was the guy to draw the first ever full-length adventure for Flash Thompson, Agent Venom,” says Slott. “Hey, is that available to read on Marvel Unlimited?”

“Darkest Hours” marks the start of another year of Superior stories, but if you want to know more, don’t expect many hints just yet.

“There [are] some big twists and turns in this one and I’m not giving anything away,” swears Slott. “Things are about to get very dark.”

Can’t make it to the convention? Follow along with our liveblogs and on Facebook. And don’t forget Marvel’s SDCC News Hub, the Marvel Events App & events.marvel.com, the best way to get exclusive videos, real-time announcements from the convention floor and up-to-the-minute panel, in-booth and signing schedules of all your favorite Marvel creators!