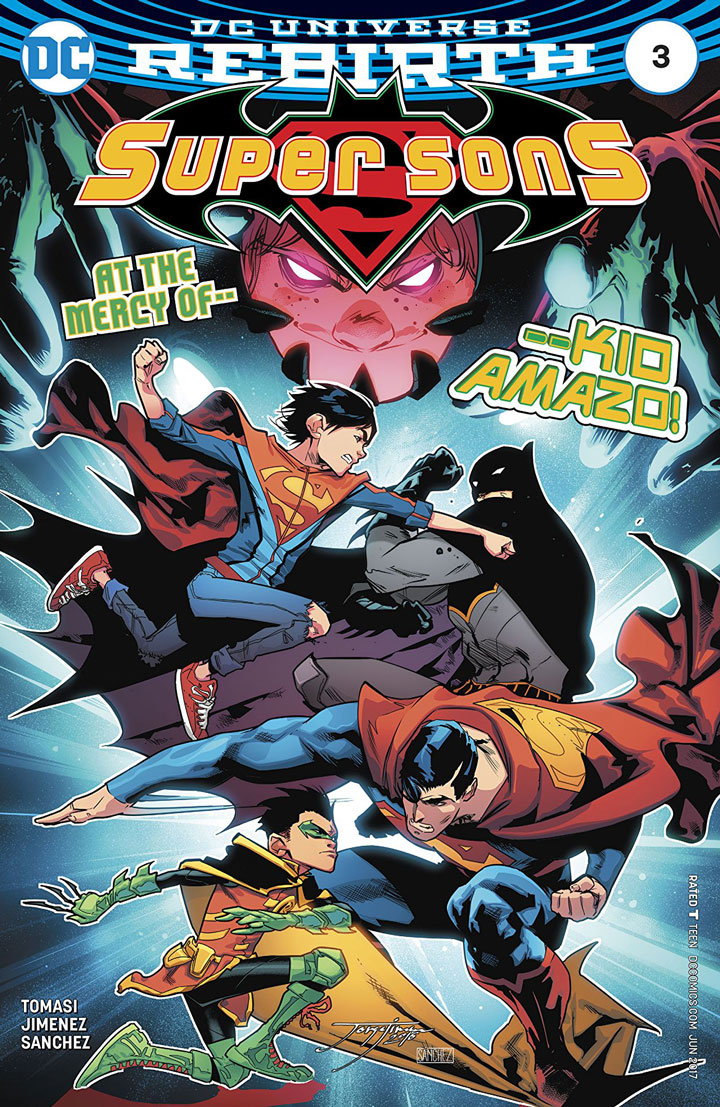 What do you want to be when you grow up?

Superboy and Robin already know and are trying their hardest to become their own versions of their father’s iconic image. This action-packed issue continues the “When I Grow Up” storyline and finally catches up to where the first issue opened with the Super Sons being chased by robotic versions of themselves. The book is a quick but dynamic read that continues to deliver a great story and art.

Super Sons is just too much fun and will bring smiles to the reader the entire issue. The dialogue that Tomasi continues to gift us with each issue keeps the story lighthearted and fits well for the young cast. Even the seriousness of the situations the pair find themselves in is given levity by the back and forth brotherly bickering they engage in.

This generation’s “dynamic duo” are slowing developing their relationship and are starting to work together a little bit better; even if they can’t agree on anything. The story itself has a couple of surprises that keeps it from being just another tale of stepping out from under the shadow of their father’s cape. We also finally get an interesting backstory as to what’s going on with the family that’s being held against their will in the first two issues.

One of the best things about the Super Sons saga is that Damian and Jonathan are hyperbolic versions of their fathers. In many of the previous iterations of the offspring of DCs godhead they are often portrayed as opposites of their fathers. While this may make for a more interesting conflict-filled story, Tomasi’s version just works so much better. There is already enough conflict with being the children of the two most powerful men in the world.

Jimenez portrayal of the kids continues to be spot on. Jonathan’s scrappy young look is the perfect counterbalance to Damian’s holier than thou attitude and posture. Jimenez excels at drawing the action scenes and infusing lots of movement not only in the characters but with panel layout and shape as well. The kinetic movement of the fight scenes further reinforces the hyperactive energy of the Super Sons. Since Johnathan doesn’t have to temper his punches against the enemy we can see some awesome raw power coming from him.

Damian on the other hand moves with a calculated finesse that the son of the Dark Knight should possess. There is a lot of excellent ink work in this issue with nice thick lines outlining our heroes and maintains the focus on them. There is some really great use of negative space in this issue making Sanchez’s colors pop, especially as we move from night time to early morning lighting.

Overall, Super Sons continues to be an enjoyable read and always leaves the reader looking forward to the next issue. This team up could be the best one to come along since Batman first met Superman. In the future, it will be fun to look back on these early adventures and see how their relationship has evolved. Pick up this issue for continued fun, adventure, and laughter as the two continue to jab each other.