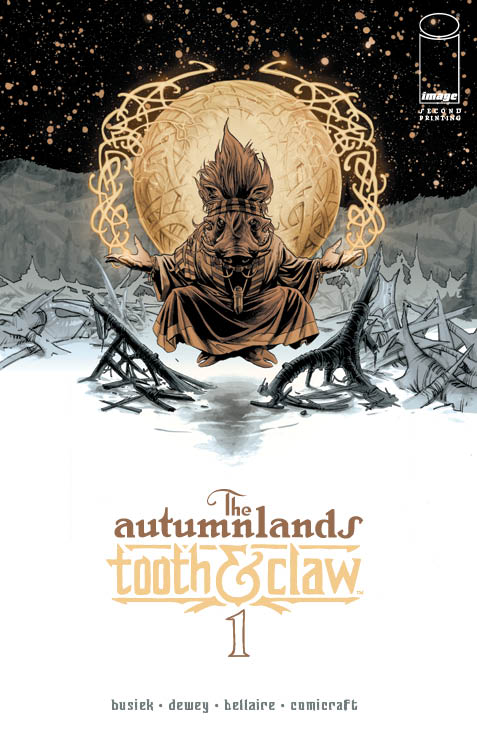 The first issue of the richly written and drawn fantasy TOOTH & CLAW will go back to print, but under a new title: THE AUTUMNLANDS. The bombshell launch by bestselling writer Kurt Busiek (Marvels, Astro City), artist Benjamin Dewey (I Was the Cat, Tragedy Series), Eisner-winning colorist Jordie Bellaire (THE MANHATTAN PROJECTS, PRETTY DEADLY), and letterer John Roshell of Comicraft will also boast an alternate cover on issue three by artist superstar Skottie Young (Rocket Raccoon, Wizard of Oz).

“The launch of our new series has gone beautifully,” said Busiek. “We couldn’t be happier. Well, maybe just a little happier. I’m still not sure how we managed to screw up the trademark search. But as it turns out, the title we thought was clear for use is in fact registered to someone else, which is embarrassing as all hell. Oops.

“So as of #2, the book will be titled The Autumnlands: Tooth & Claw,” he went on, “and we’ll do our best to make sure people won’t miss it on the racks, or think it’s some wholly-different series. As you’ll see, we did make sure the logo will still be recognizable to the readers who snapped up #1.

“We’re also thrilled that #1 sold through as fast as it did, because that means a new printing,” said Busiek. “Retailers have been asking me since #1 sold out how soon a new printing would be available, and I’m very pleased to be able to say it’s on the way. Plus, it’ll have the new logo on it, so that gets us the right title on the book, even on a printing of #1.

“Plus,” Busiek added, “the idea of the ‘autumnlands’ is central to how the series works and is going to progress. Now readers can get a jump on figuring out just what that means…”

Best described as Conan meets Kamandi with a Game of Thrones-style storytelling experience, Comic Book Resources says of THE AUTUMNLANDS, “each panel is worth the cover price all by itself, but combined this is a comic book that simply cannot be missed,” while Multiversity Comics raves, “This is the beauty of creativity and collaborative storytelling.”

In THE AUTUMNLANDS, a secret conclave of wizards brings a legendary champion forward through time from the forgotten past to save the world—with disastrous consequences. The story features swords, sorcery, beast-wizards, gods, sprawling animal empires, golems of radioactive decay, crystalline badlands, con women, ancient armories, young love, mystery, blood and death and treachery and destiny.

In the AUTUMNLANDS: TOOTH & CLAW #3, readers will meet Goodfoot the Sly. But is she really here to help the wizards… or herself?