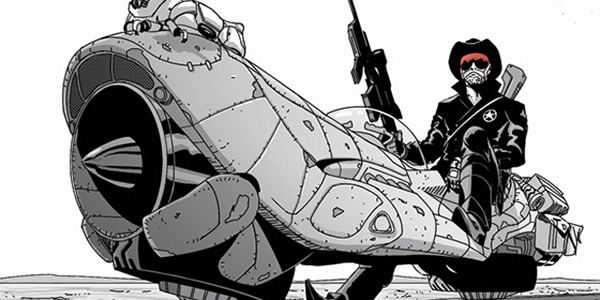 Many times when the word “mythology” crops up in conversation, the trend is to think of ancient, distant lands with foundational gods and religions — the Norse, the Egyptian, the Chinese, etc. We tend to conceive of the mythic entities like Odin and Ra as being those who were once worshipped. How do we then come to grips with the fact that (perhaps) one day, future archeologists might teach about Yahweh, Christ or Allah in mythology courses to children of the future? How do we handle the intersection between the history that once was and the mythology those things are now?

For Americans the issue perhaps must be raised because we are a young nation and we are still building the foundations of our own mythology. In a sense, we can already see where some historical figures (the Founding Fathers, for instance) are spoken about in different terms depending on the message you feel they intended to deliver. The Constitution might have as much power as an American mythological document as, say, a religious text does.

After awhile, social and religious history blend together into a wholly new narrative — one scholars and experts pick apart with great care. But how has American lore and history been worked into comic books and what message can such books impart to us as a readers? 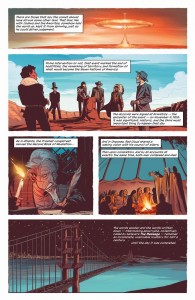 Few comic books have perhaps played so fast and loose — yet so profoundly beautifully — as Jonathan Hickman’s weird-western sci-fi romp, East of West. The universe of this comic is quite literally founded in the fires of the most powerful event in American history since the nation was founded: The Civil War. The events of the comic depict one of the most premiere Southern generals, James Longstreet, converting to religion after a particularly bloody battle. The idea of Longstreet picking up the robes of the cloth is one of numerous changes Hickman sets up in the first few pages of East of West. As history is shown to change, more and more figures we might not inherently think about as ‘mythological’ appear. One of the most interesting is Mao Zedong, a historical political revolutionary that Hickman turns into a kind of exiled prophet. Longstreet and Mao, two defining icons for America and China, the East and the West, become symbols of the comic’s ultimate power. It casts people in a fictional universe as caricatures of the kinds of people they are sometimes seen as in our world. The Chinese communist revolution really did turn Mao into an almost iconic figure with a genuine cult of personality around him. Longstreet in our real history became rather infamous in some historical circles as a fallen figure for the South after the event known as Pickett’s Charge. But here we see Longstreet as wholly re-imagined man who is still larger than life in the comic panels. 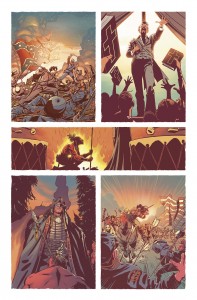 East of West presents an America whose past is slowly changed more and more with every flip of the comic page. Hickman starts skipping decades to show the amazing, fascinating changes his new history takes until we have an America that is split into seven parts. Each of these parts seems to harken back ironically to an America closer to when the nation was first fought over between Spain, France, and England. The ‘new’ America of East of West re-casts the nation almost into the foundational “icons” of its founding — Texas, Native American peoples, England, the Union, etc.

The comic universe of East of West can remind readers that America has never entirely been one solidified landmass, something we might forget when we just say “America” to others in conversations. While nobody would ever say “You know, the economy in this current United States (that were once divided up between differing ideologies and nations yet whose current cohesive state is harmonious) is sure out of whack,”  you’d not be entirely wrong for stating such a thing. A comic, whose attempts at the kind of sci-fi entertainment East of West aims for, certainly also provides a convenient means of remembering the diverse states and countries of which America was born.

As Hickman revises the foundational history of America for East of West, he also takes one of Christianity’s most complex issues and cranks up its iconic symbols into full-fledged characters, who then proceed to steal the comic. The issue of the apocalypse and its iconic symbols are none other than the Four Horsemen, who will herald the coming of this bizarre, perhaps horrifying, event. While Christianity has many aspects that make it an iconic and recognizable religion, the depiction of the End of Days by John of Patmos is one of the strangest stories/prophecies in any religion. East of West presents the Four Horsemen as literal figures who prowl the East of West-verse seeking one of their own who has gone missing from their ranks. 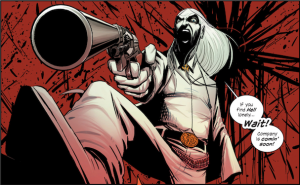 Buried in Hickman’s story of Seven Nations, revised history, lost Horsemen, and love that defies all natural and supernatural limits, the sense of the Apocalypse looms large. Many fantasy and sci-fi writers have taken their own stabs at the Horsemen, but when these figures are overlaid over the East of West-verse? The story of America and its ties to events known as the Great Awakening (three of which occurred between 1730-1740, 1790-1840, and 1850-1900 respectively) is fascinating, and is as much a part of the evolving American mythos as much as the different founding nations/territories that created America.  Hickman presents a sci-fi universe in 2060 which is gripped in the fascination with a religious movement with the power to re-shape (or, possibly destroy) the world. Hickman’s take on the Horsemen and their compliance/agitation of this plot presents some of the more bizarre mysteries that are being revealed as the comic produces more issues.

The End of Days

East of West has multiple other issues that could take whole articles of write about — the lore of the Native American peoples and their depictions in the comic, the use of technology juxtaposed against the ‘frontier,’ or the Chinese/American connections. While this article did focus on the over-all ‘bigger picture’ of East of West’s mythos (the Seven Nations and the use of the Apocalypse), it is paramount to remind the reader of this comic that Hickman did not make these elements up out of thin air. The greatest part of East of West is that the comic is an almost living, breathing world built up from the amazing pieces of our own cultural, spiritual, and historical narratives. Hickman simply re-wired the story and then threw it into the future.

My hope is that by viewing such a bizarre and fascinating comic landscape as the universe of East of West is, you will go out and look up our own nation’s actual history to try and see where Hickman took his own spin on events or where he simply deviated things by the slightest margin. Between those two directions is not only the best storytelling, but also the most rewarding.