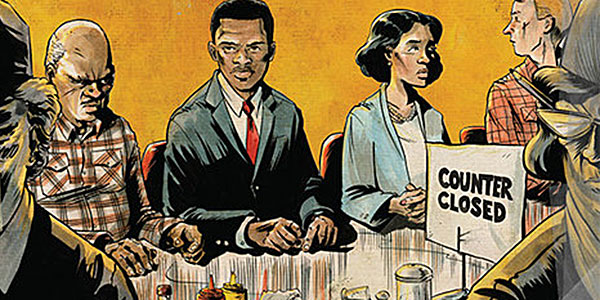 One of the goals when I set out to write for and design The Comics Classroom was to accomplish two things. First, I wanted to explore comics from a non-traditional viewpoint as an aspiring academic who has only started to investigate the medium. Second, I believe that comics as an artistic medium contain the power to connect us to issues bigger than strictly ‘entertainment’ issues. Sure, comics are amazing because they can be entertaining and they can promote bigger themes, but sometimes, comics come along that are almost certainly beyond being just a graphic medium. They are pure representations of history. 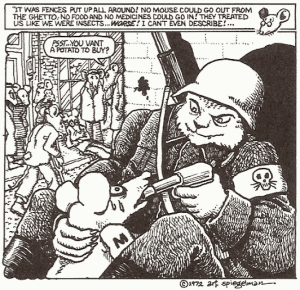 I should point out before continuing this particular article that I need to acknowledge aspects of myself and the lens through which I write. I am blessed to have been born into a family whose foundations on my mother’s side, while being from German immigrant stock, were capable of building a good financial base for my grandmother and her children (so, my mom and uncles, etc.). My great-grandmother left Germany before World War II, however she had cousins who fought on both sides. My great-grandmother was capable of marrying and owning property and then passing it on, due to the fact that she was white and married a white man. My grandmother and my mother thus inherited property, and achieved what they have because money was capable of having been left for them —property inheritances, tax codes, and all manner of legal blessing that have come to my family in the USA. I am the product of a series of marriages and financial transactions that were allowed to go on, without a hitch, because my family was a certain skin-tone.

Why do I mention all this? It isn’t (I hope!) to imply I am special due to anything related to skin or financial status. I am not. I bring this up because it is my cultural heritage and I need to understand where I have come from. That, in a sense, is ‘my’ history. My family can trace roots back to different English Kings, made possible because succession laws and titles were recorded and set down due to — drum roll please — the fact that the people in power (white lords and ladies and middle-class types) wanted records kept.

So many people have not had this luxury — the luxury of being able to just go to Ancestry.com and look up their pasts. I know people who can’t trace their legacies back beyond World War II because their families were exterminated, records were destroyed, the German government would not allow documentation to be processed, or because nobody survived to pass down stories.

History can be records and documents, but having stories passed down from one mom or dad to their son is a kind of history too. Here is where comics come in and where I think they are amazing, beautiful tools for helping supplement and explore periods of our own history so we can leave records for the future generations of children yet to be. 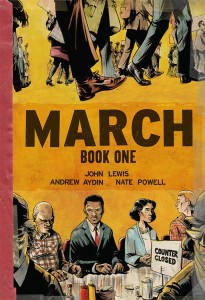 Before proceeding, I need to comment on the remarkable review already written for this book by Aaron Long. Before reading my analysis of this book, read the review Aaron wrote and then go buy this book.

This writing (well, the umpteenth revision anyway) comes days after the memorial of Dr. Martin Luther King’s ‘I Have A Dream’ speech. As I sit here typing, I am astounded at how diverse a point of view there is as to what the Civil Rights Movement meant for our country. Three names came together to produce an opinion well worth sharing. John Lewis, Andrew Aydin, and Nate Powell came together to produce March: Book One, a comic that explores the early life of U.S politician John Lewis. The life of John Lewis is something extraordinary in itself and the comic March serves as an astounding kind of visual autobiography. The idea of a U.S Congressman working with artists to cover issues like the early movements of the Freedom Riders, sit-ins, and events that were so defining for the Civil Rights Movement is big in and of itself, but the fact that this story exists as a comic is remarkable. 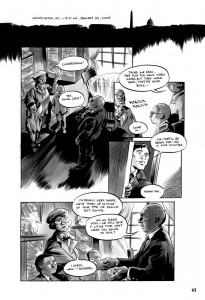 Praise needs to be sung for the art-direction of the comic itself. Powell uses lines and styles for his panels that seem more like a fuzzy-but-still-vivid memory than a graphic layout. Much in the same way that Maus is drawn (which deserves to be spoken of here as well), the impact plays out as more ‘real’ than ‘polished.’

This work is powerful and emotional and complements other texts on the period by allowing for a more ‘human’ feel. Often standard texts alone benefit — and yet are punished — by the fact they are texts. The author is allowed to narrate and to command a story, yet he or she does so at the disadvantage that if he/she is writing to a person who has not lived through, experienced, or is without a context for the period, then some power is lost between PAGE and IMAGINATION. Comics allow for a complete picture to be presented to the reader, one in which the author (in this case, the man who was present for these experiences) can vouch for their authenticity. The fact that John Lewis helped work with Nate Powell means the experience of reading the book retains as much authority as possible for things like tone, clothing, building style, language use and dialect, etc. Short of having a video camera crew that can go into the past, March: Book One presents a powerful text that bridges the past and the present. 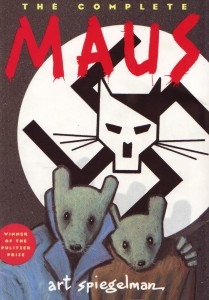 In my (brief) time as a comic scholar, no book seems to have made the impact for championing comics as academic texts more than Art Spiegelman and his work called Maus. This book is quite possibly one of the most definitive graphic novels ever produced and its value cannot be summed up here in any number of words alone. As with March, you simply must read this graphic novel.

The most impactful thing about Maus, much like March, is that its power comes from its authenticity. Maus is Spiegelman transcribing the story of his father, Vladek Spiegelman. Vladek was a Holocaust survivor who raised Art and who eventually allowed his whole story to be set down into a comic. Maus draws from audio and hand-written note records between Art and Vladek; however, what is unique about the comic is the almost fantastical-realistic tone. Art casts the Jews as Mice, the Germans as Cats, and other ethnicities as other animals. This act separates Maus from March in terms of style, but like March, the history and the authenticity is the power behind what the reader experiences. Vladek is very human – he can be irrational, temperamental, kind, forgetful, and (ironically) even racist. Nothing is hidden in the presentation Art gives about his father and the horrors he went through. 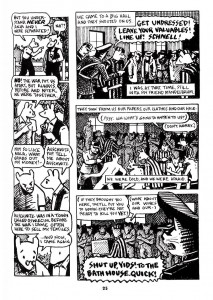 Maus is, for me, not an easy comic to advocate you read repeatedly, unless you wish to use it for research as I have done. Like much material regarding the Holocaust, it is tragic and difficult to get through at times. The fact this record exists, however, is a testament to the power of the graphic novel format — that it can allow even the darkest and most tragic of accounts to be accessible to more and more people of various ages. I have seen Maus taught in high schools, be presented on summer reading lists, and taught in college classrooms. Its popularity, I feel, is a result of the authenticity and reality of the story Art and Vladek weave together between graphic characters and interview content.

History has left us many accounts of the Holocaust, but Art’s vision of what his father went through is unique in that is a story of two generations: Vladek the survivor and Art who survived having the kind of father he did. Art’s work is as much a story of a post-Baby Boomer as it is about Vladek. Sometimes we forget that the writers of history texts are influencing the story as much as the people they write about. Much like March, Maus draws strength from both authors and becomes a hybrid biography and autobiography all at once.

Where to go next?

I am not entirely sure where to wrap up this particularly powerful article. In a sense I feel like I have written the most important Comics Classroom article yet, but there is so much I have left out at the price of simply wishing to give an overview. My intent was to provide enough of a context as to how our history shapes us and to highlight these two comics, naturally all in the hopes that you buy them and learn from them. 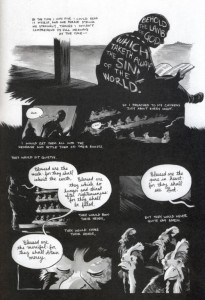 Still, in the end perhaps I need to amend that last aspect. ‘Learning’ from history is only part of the power of Historiography. We can learn everything about a past culture, or an empire, or even from our own life experiences.

What do I hope comics like March and Maus do for you?

I hope they help you understand where you are going in your future. I hope these comics put things like history and family and racial comprehension in context to help you make informed choices about how to think, act, and teach others. Comics are entertainment, yes. They are tied into business models so people (artists, writers, businessmen, etc.) can make money, yes again. Nobody will or should deny that comics as an artistic medium are merchandise.

But they are still works of art, despite all that. Comics are objects that can serve to preserve history and the lives of those who lived before us. When you read works like Maus and March you are entering a kind of time-machine and living another world, one where YOU will not be sprayed down with hoses, beaten, or shipped off to a camp. You gain the benefit of a time machine with the luxury of ‘closing’ the time machine and getting to return to the present whenever you want.

When you read these books? Take stock and feel blessed to be who you are. Be thankful that these stories were preserved for you so you can use the lessons others faced through physical hardships without the bruises, injuries, or numbers being put into your arms. Read, remember, re-group, and go forward in your life.

Make your own history and be proud of it. Someday perhaps we’ll all be reading about you in a graphic text. Make your story a great one.