Few characters in the Marvel pantheon of deities are as dangerous or as cunning as Loki, the Asgardian deity of chaos and mischief. Loki has been portrayed, like many other Marvel villains, frequently in comics and video games. Currently, however, he has two incarnations that resonate the most in the average person’s mind. One is the Loki played by Tom Hiddleston, and the second is his de-aged incarnation, appropriately called ‘Kid Loki.’ But why does Loki have so many shapes and incarnations? How does any of this line up with the Loki from actual Norse mythology? Put on your reindeer-games helmets and as we journey along into the darker, more mysterious side of mythology — trickster deities. 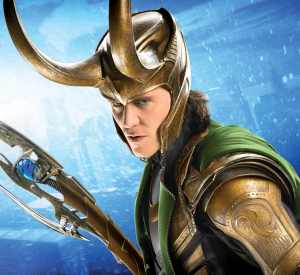 First things first — we don’t actually know much about Loki from ‘authentic’ Norse texts, asthe ancient Germanic tribes did not keep records in the same sense as other peoples whose religions and myths we are more familiar with. What we have is a large-scale game of cosmic “Telephone,” where Christian texts re-interpret orally told Norse myths.  Loki can be defined as a Norse god or a jötnar (a giant, something similar to a Titan in Greek myth) and this complicates the issue vastly. Is Norse Loki an adopted deity from another, older religion, or is he wholly a Norse deity in and of himself? Such questions perplex mythological scholars and the further problem is that the man largely responsible for one of the most famous texts on Norse myth — the Prose Edda — also conceived the idea that these ‘gods’ were, in fact, humans who have been turned into deities thanks to myth.

Basically, the genuine mythological Loki is a riddle of translations, re-definitions, and re-imaginings across hundreds of years. In some myths, he is a deity concerned with fire; in some he pals around with the other gods and spends his time tricking giants; in others, he is tied with Surtr for “most powerful big bad guy” in the myths of the Norse.

One thinks if Loki were real then he’d like nothing better than seeing his origins so shrouded in contextual misunderstandings and historic mutability. In a sense, the Loki of Marvel Comics has undergone a very similar mythological set of ‘changes’. 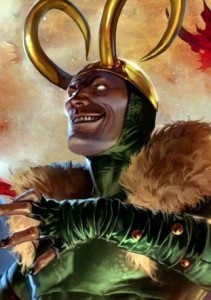 While a rather ‘demonic’ Loki-character existed in the Timely Comics run of Venus (as well as likely any educational comics from the period), he was redefined by Stan Lee and Larry Lieber to be the typical antagonist for Thor in the Journey into Mystery comics series. Loki earned his genuine place in the bigger Marvel Universe once he became responsible for being the force that united the group who would become The Avengers in 1963.

Over the many, many years of Loki’s comic history he was proven to mainly desire power: rule Asgard, rule Earth, etc. There has never been anything wrong with this kind of storytelling, but it would be J. Michael Straczynski and Kieron Gillen who would begin the modern Loki’s newest defining characteristic — changing the body of the Tricketer god to re-define his nature. JMS would define his take on Loki by having him be ‘re-born’ into the body of Thor’s love, Sif (sometimes called Fem-Loki or She-Loki by fans), while Kieron Gillen would transplant Loki into the body of a child (called Kid Loki by his fans). These two takes on Loki would only prove some of the new bodies Loki would take as Kenneth Branagh would cast actor Tom Hiddleston in the 2011 Thor film.

God of Mischief or God of Darkness? 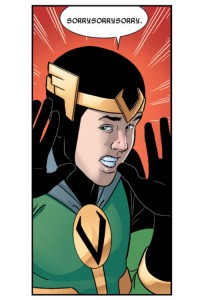 One of the toughest issues to pin down on Loki is his nature. While JMS cast Loki as deceptive, manipulative, and the veritable cat who plays with mice, Loki became involved in a plot involving time magic. In JMS’s run on Thor, Loki went back into his own past while pretending to be an old wizard. Loki then became responsible for killing Laufey, his giant father. Through actions of “Loki prime,” the god engineered his own delivery to Odin as a child. Loki ponders this upon his return, but he is unconcerned with the ‘how’ is his existence. He is simply content to be. The nature of this view on Loki advocates his agenda as one of outright evil when he convinces Baldur (acting King of Asgard at the time) to unknowingly sell the Asgardians to Dr. Doom for his own horrifying experiments. In short, the JMS Loki plays more to the notion of Loki as an evil entity — one with charisma, agenda, and a blatant desire to bring ruin to the House of Odin almost for the sake of ruin alone.

Enter Kieron Gillen. Gillen would be placed into the position to present yet another variant of Loki. At the end of JMS’s run on Thor, particularly during the Siege comic event, Loki seemingly killed himself to save Asgard. Kieron would pick up from this point and bring in a new Loki, one who appears as a small boy with no knowledge of his past when Thor finds him. Unbound by his own past as a rather malevolent creature, Kid Loki jumps across the pages of Journey into Mystery as a genuine Trickster. Kid Loki uses white lies, blatant lies, misdirection, deception, and great deals of humor to play the hands of good and evil characters alike while he tries to find a place for himself in Asgard, one he defines on his own terms. This variant of Loki is more ‘Dennis the Menace’ with divine powers than being the not-quite-Lucifer-but-basically-Lucifer version JMS built the character into.

Kieron’s run on Loki comes to a close with a literal confrontation between two ideas of what Loki was, what Loki could be, and what Loki (according to the dictates of the state of the Marvel Universe) should be. The dramatic end of Gillen’s run on Kid Loki in this comic proves to present one of the greatest assets of the character: he can change at the whims of writers and it won’t break the character. Loki’s mercurial nature becomes as much a part of his character as it becomes a plot device. The nature of Loki as an evil deity versus a mischievous one is in fact both. 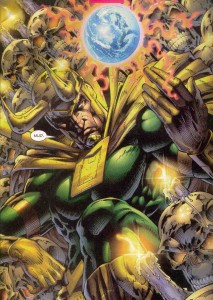 Given the divided nature of how Loki can be written into comics (saying nothing of the astounding performance given to Loki’s character by Tom Hiddleston in the Marvel films), Loki is dynamic for writers. While some writers can present a Loki who seeks Ragnarok, others can present one who actually tries to prevent it, as is the case with Kieron Gillen’s version. This naturally leads to the big question — is Loki a character who can redeem himself or is he forever bound to be what he is? Kirby, JMS, and Gillen have each taken the character and re-molded him to the Loki they needed. Some newer takes on Loki have then presented an interesting door for the character to walk through: redemption. Is this something Loki can wish for himself or is it something that goes against his nature, as he has nothing to need redemption for? Because, in the end, the universe created him the way he is? Regardless of the nature of Loki, Thor certainly has proven that an Asgardian can earn redemption for his past offenses against his family and the universe.

One of the best parts of Loki is that wanting him to find redemption or not reveals aspects of the reader. Do you feel the nature of evil is inherently a part of people and/or existence? Do you feel everybody is impacted by their own choices and that we are made, not by outside influences alone, but by how we chose to behave every day when we wake up?