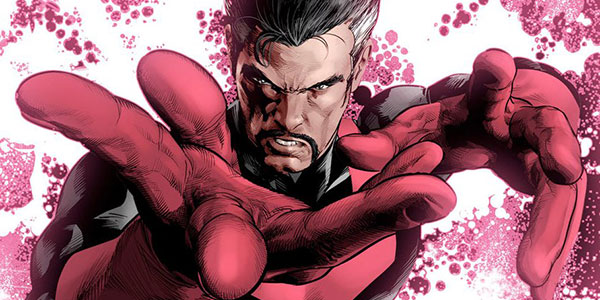 Mage. Witch. Heretic. Sorcerer. Mystic. Wizard. These are but a few of the terms applied to countless comic characters across numerous pantheons of characters — some good and some evil. The characters that wield the art of “magic” are about as varied in comic history as the sources their mystic powers come from. These characters take their place as mentors, heroes, and mystics along with numerous other literary and cultural figures, some of whom even have their own histories intertwined into the comic universe. 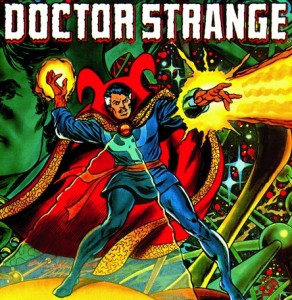 One of the most famous literary sorcerers in the history of comics is Doctor Stephen Strange — Dr. Strange, the Sorcerer Supreme. Created by Stan Lee and Steve Ditko in 1963, the character of Stephen Strange was presented as an arrogant, uncaring surgeon who lost the use of his hands in a car accident. Strange found himself traveling to the Himalayas so he could converse with a being/person called the Ancient One, in hopes of having his hands restored. Instead of having his old life returned to its broken, meaningless existence of money and pride, Strange was rewarded with the chance to embrace a new life as the mystic successor to the Ancient One himself.

Strange’s journey is a textbook hero’s journey on paper – man has physical event that changes him and with counseling from a mystic mentor he embraces his new calling as a hero.  Where Strange excels in his own mythos, however, is the scope of his actions. Strange’s “magic” stems from The Eye of Agamotto and other objects awarded to him via the Vishanti. The power of the Vishanti is based on esoteric gnostic mysticism, as well as Indian/Asian mysticism, making Strange capable of being considered a mystic across numerous cultural borders. He draws powers from texts and objects, a means of sorcery more visually comparable to an alchemist or a European warlock. He communes with foundational forces of the divine/mystic, like a priest. His body is a vessel for their bizarre power, much like a shaman or even a sufi mystic practitioner. Strange’s non-border/culture specific magical allegiance makes him a fascinating character who, despite his title as Sorcerer, can also encompass the identity of many other mystical roles. 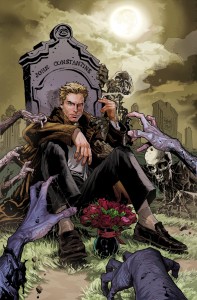 To counter the idea of a figure that serves the order-seeking forces of magic, John Constantine embraces a very western, very dark view of magic in his role as a magician. Where Strange harnesses his power that he both sought and desires, Constantine is much different.  Created by Alan Moore in 1985, Constantine is chiefly a magician, a person who possesses the innate art for magic that normal people do not have. Constantine’s gift is a part of who he is and what Constantine is … is questionable, at best. Moore created Constantine with the image of artist Sting in mind, a character whose roots would be based more in blatantly occult (here being opposed to the powers of the Church) sources. Constantine is a pop-diva with a dark streak, a trickster who is as dangerous as he is heroic.

While Constantine appeared in Swamp Thing first, he soon grew beyond that book alone and became the star of Hellblazer. With a title like Hellblazer and John’s magical roots in the occult, the literary tradition of his character is deeply Western. Constantine has faced off against denizens of the very-Christian Hell and even had dealings with many of the rulers of the Underworld itself. Constantine is based in a tradition of magic that is dangerous and one that entraps the soul. Constantine is considered an anti-hero, one who is in the ‘game’ as much for himself as he is for helping others, although he assuredly more heroic and noble than the villains and forces he sends back to the Pit.

Another of the more interesting magical characters is Amora from the Thor comics, better known as The Enchantress. Created by 1964 by Jack Kirby and Stan Lee, Amora finds herself as the kind of character who comes to be the child of two distinct kinds of magical traditions – Norse magic and female sorcery.  In the old Norse/Scandiavian traditions, men and women could be mystics who used their power to help/hinder others. These people we called seiokona and they used their power as they saw fit, either to help or to cause chaos. For a more detailed account check out this passage from the saga of Eric the Red:

[The whole story can be found at http://sagadb.org/eiriks_saga_rauda.en ] 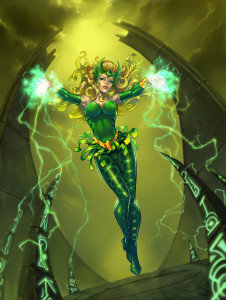 Now, when she [the seiokona] came in the evening, accompanied by the man who had been sent to meet her, she was dressed in such wise that she had a blue mantle over her, with strings for the neck, and it was inlaid with gems quite down to the skirt. On her neck she had glass beads. On her head she had a black hood of lambskin, lined with ermine. A staff she had in her hand, with a knob thereon; it was ornamented with brass, and inlaid with gems round about the knob. Around her she wore a girdle of soft hair, and therein was a large skin-bag, in which she kept the talismans needful to her in her wisdom. She wore hairy calf-skin shoes on her feet, with long and strong-looking thongs to them, and great knobs of latten at the ends. On her hands she had gloves of ermine-skin, and they were white and hairy within.

Now, when she entered, all men thought it their bounden duty to offer her becoming greetings, and these she received according as the men were agreeable to her. The franklin Thorkell took the wise-woman by the hand, and led her to the seat prepared for her. He requested her to cast her eyes over his herd, his household, and his homestead. She remained silent altogether.

During the evening the tables were set; and now I must tell you what food was made ready for the spae-queen. There was prepared for her porridge of kid’s milk, and hearts of all kinds of living creatures there found were cooked for her. She had a brazen spoon, and a knife with a handle of walrus-tusk, which was mounted with two rings of brass, and the point of it was broken off.

Amora the Enchantress claims a great variety of power, power not limited to divination and auguries. Amora’s power supposedly passed to her through the teachings of either Loki or the sorceress Karnilla, but either way she grew into a unique and capable woman in her own right. As a being who is of Asgard and not human, Amora bears some links perhaps to Morgan le Fey, the famous sorceress of Arthurian and pre-Arthurian myth. While the roots of Morgan’s history is checkered with diverse origins (and even more names) the idea of a powerful female magic practitioner is one older than recorded history. The fact Amora calls herself The Enchantress, however, makes her at least comparable to the Morgan le Fey from Le Morte d’Arthur where she and her female apprentices/friends kidnap Lancelot to seduce him and break his spirit. The Enchantress would try (many times) to kidnap, seduce, and ensnare Thor into her loving (or destructive) arms.

While we have set up the loosest set of examples of magical characters in the Marvel, DC, and Vertigo Comics universes, next time we will look at how comics have stepped in and thrown their own twists into traditional literature in-so-far as classic magical characters are concerned.