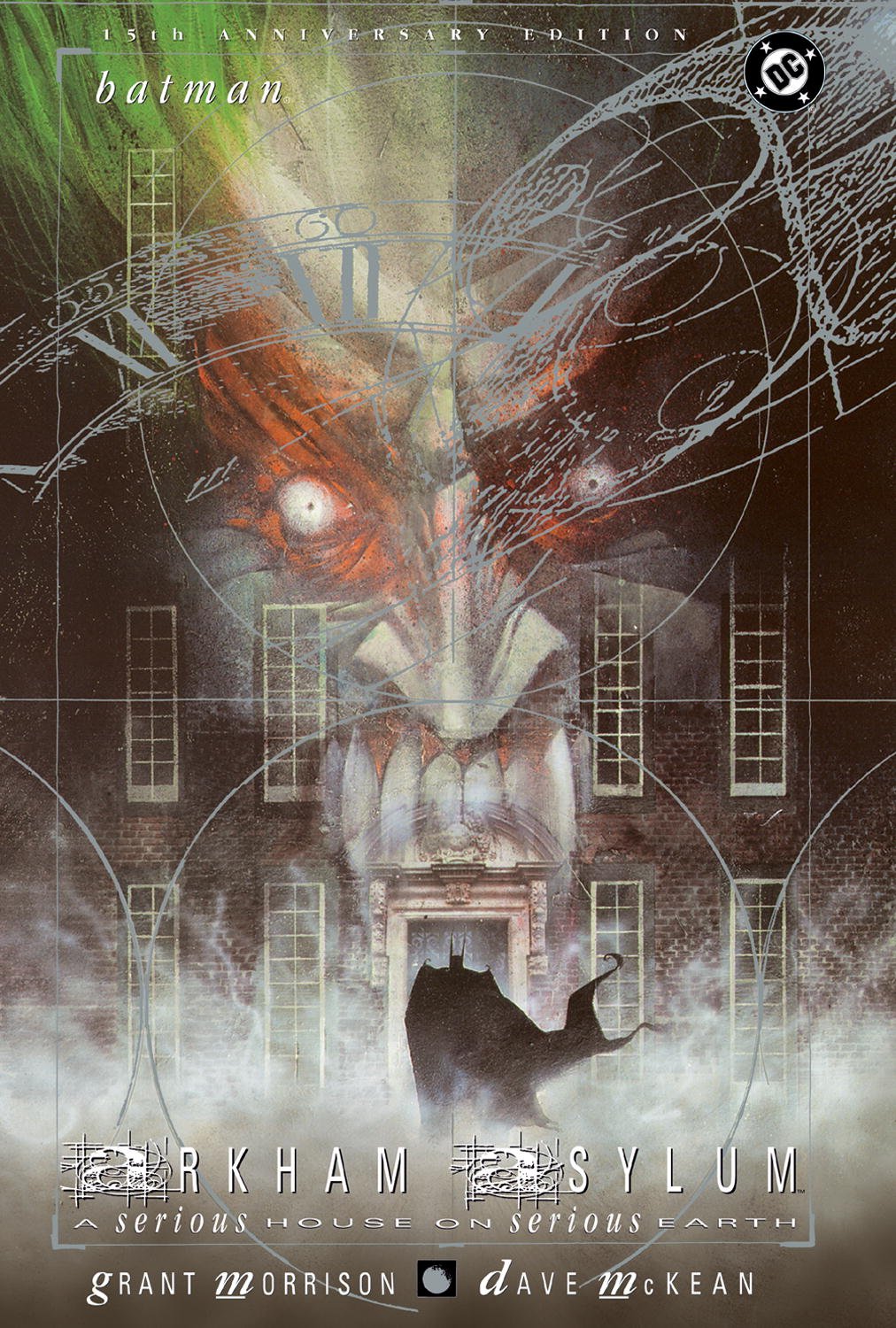 We interrupt the regularly scheduled column on “Women in Comics” to bring you something new and exciting! This week marks the one year anniversary of The Comics Classroom and, as such, we should do something new.

If there is any one aspect that might best represent the idea of scholarship, it is collaboration. The sharing, inter-mixing, and evolution of ideas across multiple papers, journal articles, books, classroom, and sit-down conversations is the most fascinating element of learning. Being able to see an idea bounce back and forth between individuals and, eventually, become a fully realized (possibly new!) scholarly term or idea is amazing. Having said that, we infrequently see where these ideas come from. We often come upon ideas in media res and we seldom see any one point come to an end, just a momentary hiatus as we close a book or say goodbye to our guests for the night.

What I hope to develop is a new reoccurring series called The Forum, where I aim to host different academics and their ideas on comics. These contributors might offer up a paper, we might talk over Skype and I transcribe the conversation, etc. My aim is to promote the continued development of ideas related to scholarly pursuits regarding comics. What follows is the first of this series. 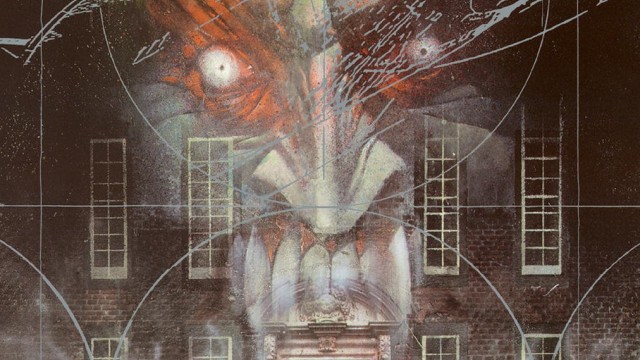 The Heroes Remain Despite Aesthetic Differences

A Look at Batman Arkham Asylum by Joshua “Jammer” Smith

Batman Arkham Asylum: A Serious House on Serious Earth remains in my mind the greatest graphic novel ever written due to its complexity, its classical tradition, the way it helped re-create the character of Batman to ensure his cultural relevance to a new generation, and the flawless execution by both the writer Grant Morrison and the artist Dave McKean.

Recently I was given the opportunity to present my views concerning the graphic novel and in this presentation I explained why I felt this work stands as such a triumph by comparing it to the classical oral traditional structure. I will attempt to condense my ideas here and demonstrate that one of the core themes of the work is the journey, and its role in re-creating Batman for a new age.

To begin with, we must understand the concept of the journey, for it is a recurring role in literature that predominates usually in oral traditional cultures. The journey is usually a physical track into a land known as the “other-world.” This land is meant to be separate from our society and reality due to its intense nature and oddity. Numerous examples exist that we can automatically jump to.

In The Odyssey, Odysseus is forced to enter into the underworld. In The Divine Comedy, Dante must journey through Hell before reaching Purgatory and Paradise. In Heart of Darkness, Marlowe must travel through the forests of the Congo before he can retrieve Kurtz. And a most recent example would be the character of Coraline, who must travel to the world of the “other-mother” in order to rescue her parents.

All examples presented here demonstrate what the “other-world” is supposed to be, a land entirely separate from our experience of reality. Grant Morrison is writing the text in the late 20th century and would therefore fall into a post-modern age of literature, and as such it would be difficult to create such an “other-world” that would be believable by his literate audience.

Rather than attempt such, Grant Morrison follows the more post-modern tradition and pushes this other-world inwards so that the journey of Batman will not be so much a physical track, but instead an emotional and psychological one. When every piece of the map can be seen on a computer screen, physical journeys become rather difficult to believe and so the only believable “other-world” is the realm of the insane.

The journey begins with the hero experiencing some form of psychological troubles usually in the form of doubt. We see this most strongly in The Divine Comedy for at the start of the Inferno the protagonist Dante is experiencing a mid-life crisis and is weary to begin the task of his journey. This wariness manifests itself in Knowledge.

The hero knows what the journey will do to him, for knowledge will always come at some expense, and he is not entirely sure he wants such knowledge. We see this in Arkham Asylum when Batman says, “Sometimes I question the rationality of my actions. And I’m afraid that when I walk through those asylum gates…When I walk into Arkham and the doors close behind me…it’ll be just like coming home.” 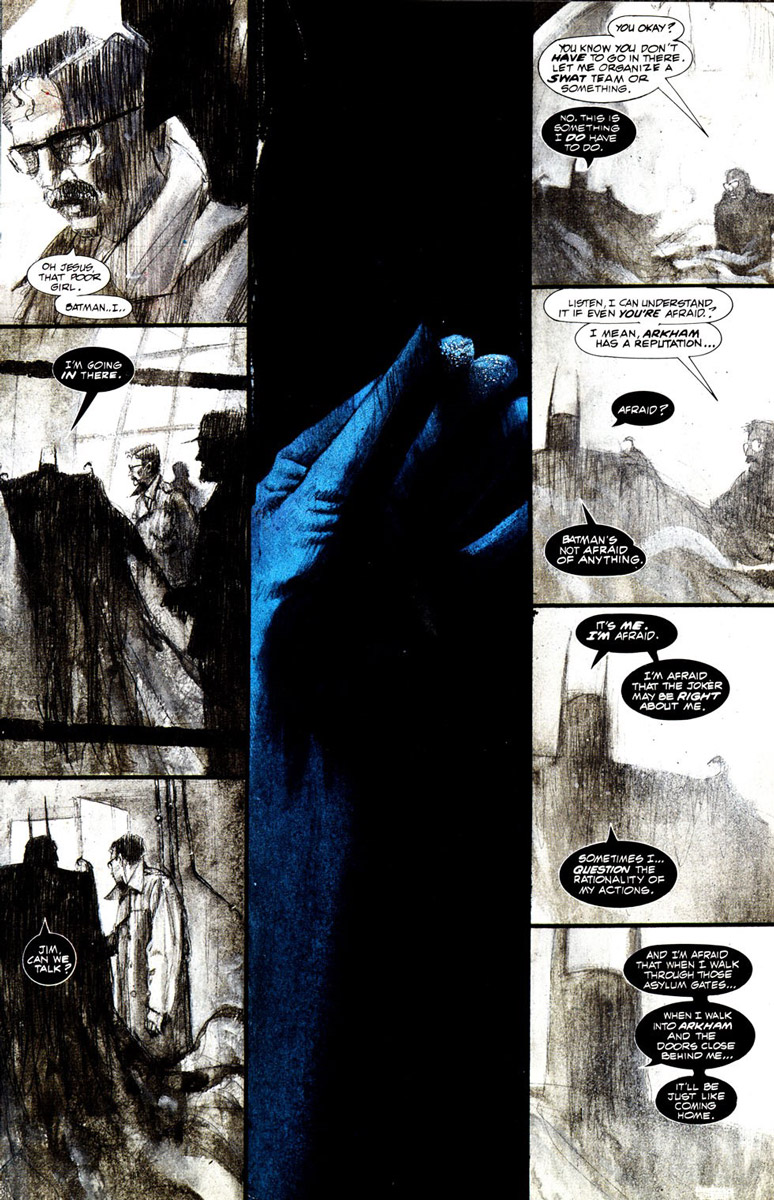 Like Dante, Batman is wary to begin the journey because he recognizes the possibility of failure. While in the past failure would amount to death or destruction of the body, in this new 20th century journey failure amounts to not just physical degradation, but acknowledgement of insanity. The “other-world” will attempt to subdue the hero, make him stray from his path, and then ultimately contort him into another shadow that will continually dog humanity.

Batman’s fear can also be attributed to the nature of the character during the late eighties. Fans had recently “voted” to kill off Jason Todd the current Robin, and they received the results of their election by having him beaten to death by the Joker (a grim concept which should and will be analyzed at a later date I assure you). Following the death of the character Batman began to slip into more ireful and quasi-homicidal tendencies until a re-birth of the character was necessary. Batman questions his actions, allowing Morrison to implant the fear of the journey. By observing this fear in the Batman, Grant Morrison opens up the character’s vulnerability so his role as a true hero can be possible.

Following the start of the journey the hero is destined to experience various minor struggles before finally facing his greatest threat, the champion of unreason. This character exists purely as the final test of the hero’s might or internal resolve for he is ultimately the greatest force of the “other-world” and is usually its master or champion. Examples of this character include Satan in Judea-Christian works or the Dragon in the legend of St. George (the champion will usually appear either as a lizard or an arthropod of some sort most likely because those two branches of organism seem to offend us terribly as a species).

The Champion will appear to the hero when he is at his most vulnerable and ready to fall and so we have in Arkham Asylum such a confrontation when Batman is faced with Killer Croc. The scene mirrors the emotional implosion of the graphic novel’s other chief character Amadeus Arkham and in this comparison of men we see what Morrison is attempting to accomplish. 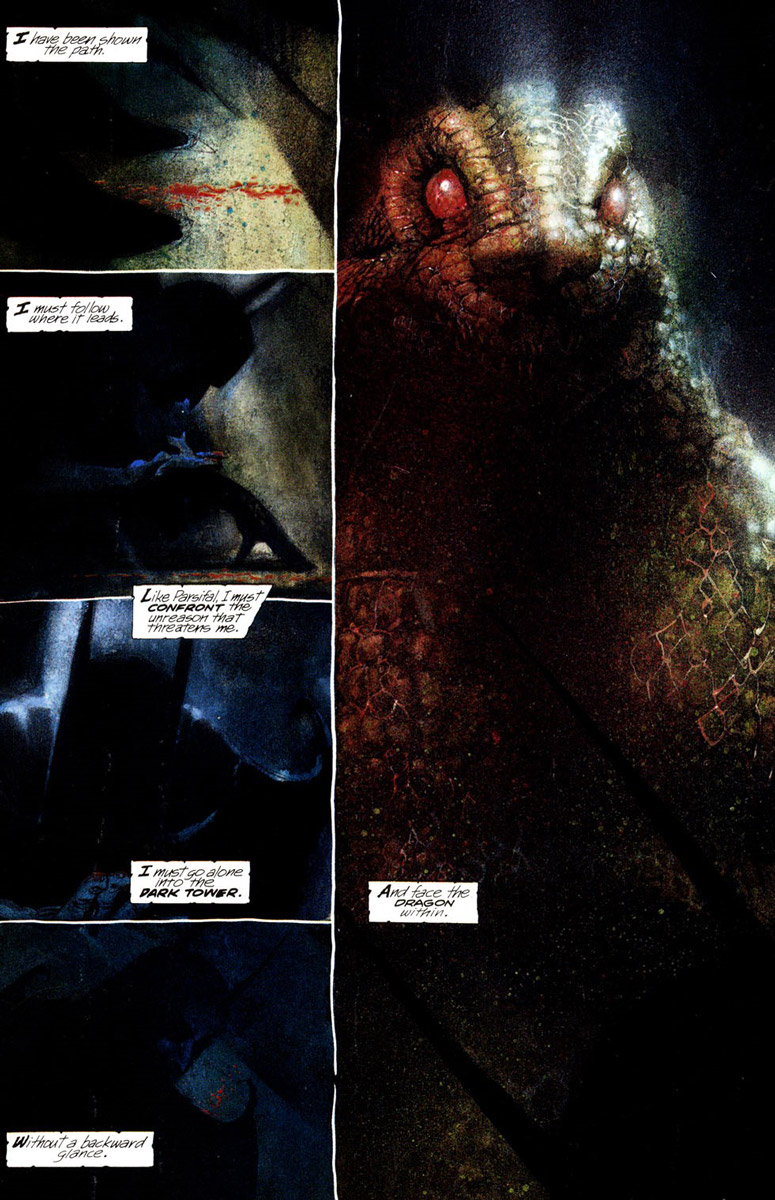 By showing the men facing their opponents through different means, Morrison is demonstrating the success of the past methods of conquering the Champions of Unreason: namely through physical confrontation. Amadeus attempts throughout the work to employ reason to conquer insanity while Batman actively kills Croc with a spear. Physical demonstrations of power echo the hero’s resolve and so like Dante kicking the head of a sinner, or Saint George slaying the dragon, Batman is able to overcome his fear and vulnerability by slaying the beast.

Insanity is a degenerative condition of the mind in which an abstract idealistic force controls all physical action over the body, and therefore attempting to confront it with reason is foolish because reason can only be effective against a mind able to perceive its power. Because Batman can directly confront the embodiment of inhuman darkness and physically destroy it, he is a true hero of the oral-traditional scale.

In other words we have to ask ourselves, what was the point? In Dante’s The Divine Comedy, the hero comes to an awareness concerning the nature of God and salvation and so he returns to society with this news. What then of Batman? He says, “Exactly. Arkham was right; sometimes it’s only madness that makes us what we are. Or destiny, perhaps”. 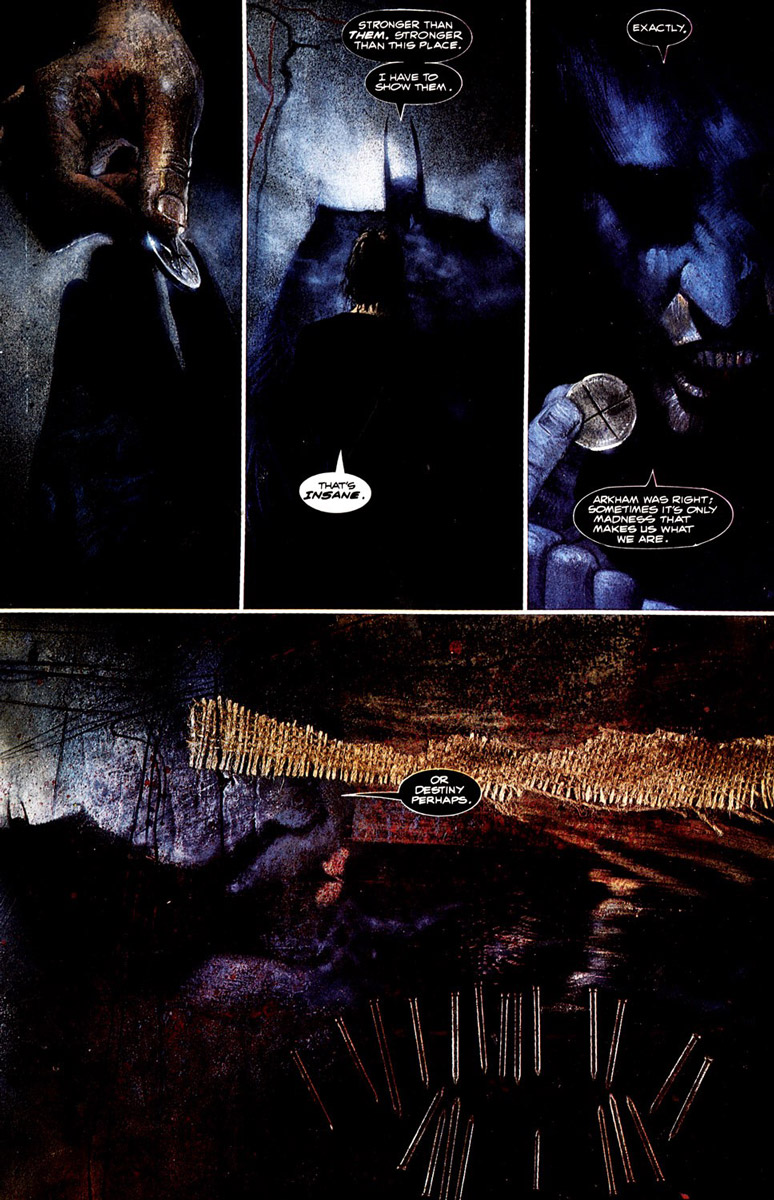 In the 20th century, audiences have grown wary or bored of moral messages conveyed through art and narrative (gone are the days where He-Man and Captain Planet could tell you to recycle or exercise), but should they exist they must possess real relevance to the audience of the time. There is no sane justifications for the actions presented in the various graphic novels and comic collections of the Dark Knight, and so Morrison presents us with a message for the modern age. We are insane. Each of us possess lunacy and eccentricity of some sort, either as a result of our development in individualized familial units or else just being in this new age of constant change.

Batman is a hero of the 20th century because he is an agent of insanity personified. We must be lunatics in order to survive this constantly changing and impersonal world or else we will falter and break under the weight of constant absurdity (This also manifests itself in an earlier passage from the graphic novel in which a doctor describes Joker’s Psychological state as a form of “super-sanity” but I’ll save that for a later article). Morrison’s message can only shine through so, if Batman has undergone the journey and emerged stronger from the experience. We have, in essence, a necessary re-creation of the character so that the Dark Knight can progress forward into the future.

I have demonstrated here what a journey is, how it operates, how Arkham Asylum matches the nature and structure of the journey, and how it is ultimately comparable to any oral-traditional work that operates under the same form. I have limited my analysis of the graphic novel severely for reasons of space, but nonetheless I have demonstrated that the book stands as an essential artistic achievement because of its similarities to the great cultural achievements of our species.

And, hopefully, I’ve made you want to read the book.

I first met my friend Joshua “Jammer” Smith at my current university of study, The University of Texas at Tyler. Josh quickly revealed himself to be a highly knowledgeable comic scholar who clearly did not just see the media as ‘only’ panels and ink. Josh demonstrated his ability to understand comics and classical works of literature as being interchangeable in terms of the elemental ideas both of these forms contained. Batman and Dante could be brought up with equal reverence because of the content of the ideas they represented. This confidence in the content of comics has allowed Josh to boldly develop some amazing ideas regarding not only how we understand comics, but also how we understand ourselves.

I first heard the live ‘performance’ of this feature article at a conference Josh and I attended in 2013. I have been lucky to know Josh as a scholar and I am lucky to share his article as a fellow comic enthusiast.