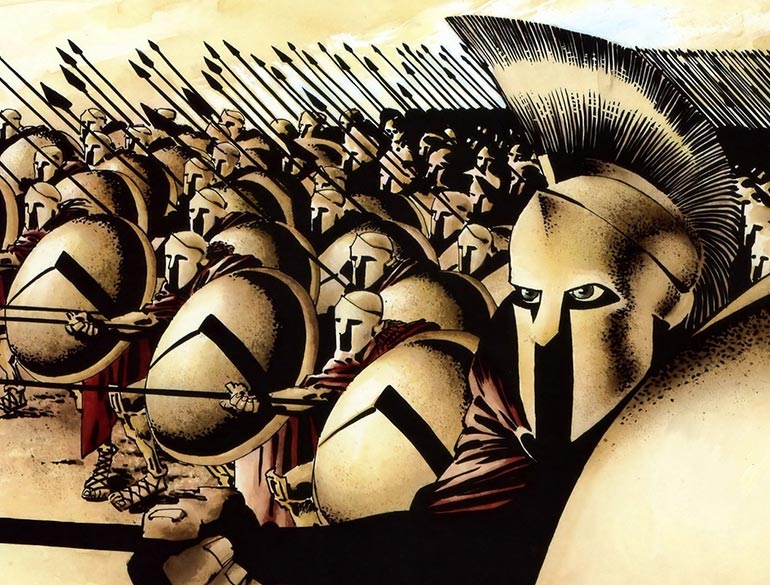 Welcome to the ‘prologue’ entry for the Age of Bronze project I will be posting on over the next year. I am excited to begin this huge project and to share not only my love of Greek-themed comics with you, but also an in-depth analysis of the same stories (Homer’s coverage of the Trojan War and its fallout) which are told in diverse and exciting ways. Some comic authors use the Greek gods while some omit them. Some authors want historical accuracy and some want ‘Dynasty Warriors Greece,’ and so on… 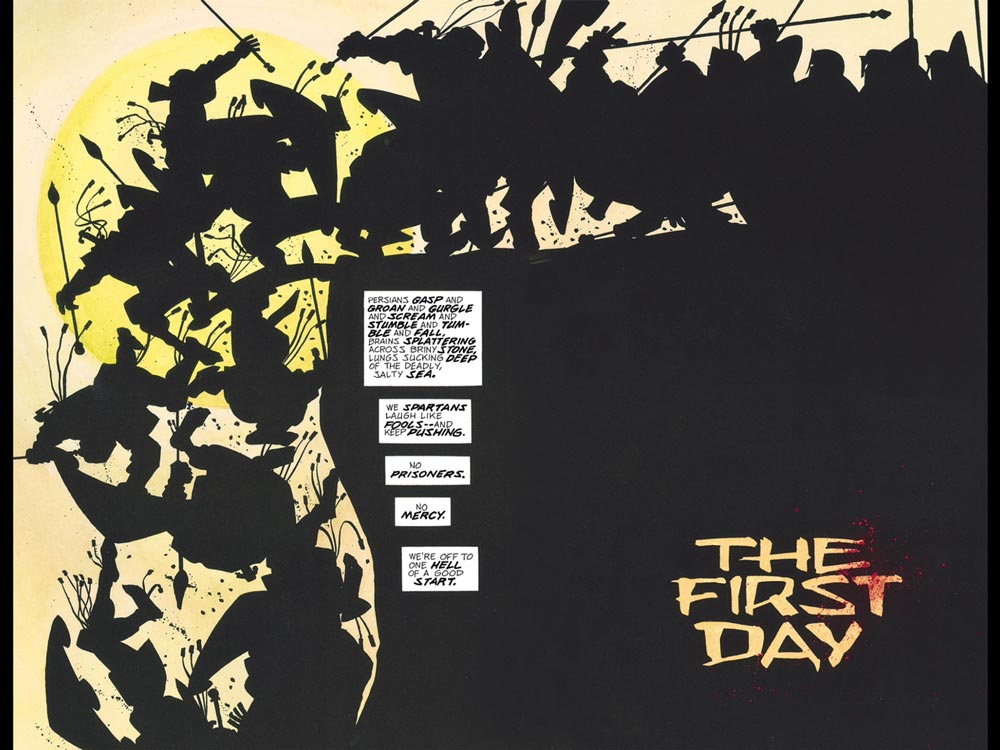 When somebody wants to tell a huge comic story, why NOT the Trojan War? It is, roughly, one of the oldest orally transmitted stories in our history and it provides a fascinating look at politics, religion, and (yes) even cultural clashes between nations. To paraphrase from Frank Miller’s 300, the Greek “share culture” at sword-point with the Trojans for a decade. The story has been around so long that it has developed many story-telling elements we comic fans are used to seeing.

Keep a story around long enough and, sooner or later, somebody else will come along to either make up their own version of the story or to re-tell the story completely. If The Iliad was the ‘Bronze Age’ of Greek Myth then Rome and her ‘reimagining’ of the Trojan War might be the Silver Age. The poet/writer Virgil decided that The Iliad was good, but it was a Greek story. What could be better? Re-making the plot to focus on Rome and the Empire.

The Iliad is a story that explains a cultural schism between Greece and Troy, but it does not explain where Greece or Troy came from. Virgil revised the content of The Iliad’s well known ending (that being how the young soldier Aeneas escapes from Troy and later lays the foundation for Rome. This is not too dissimilar from how one comic writer, say one working on an ongoing Batman title, ends his run only for a new comic author to step in and continue the story (revising certain elements from the old story to fit his new story) in a new way. Both stories might stand on their own but the nature of how one story jumped to the next during the transition of writers is important to know in looking at the tone/plot shifts of the story itself. In a very funny sense, The Aeneid is considered by some to be one of the world’s oldest works of fan-fiction. 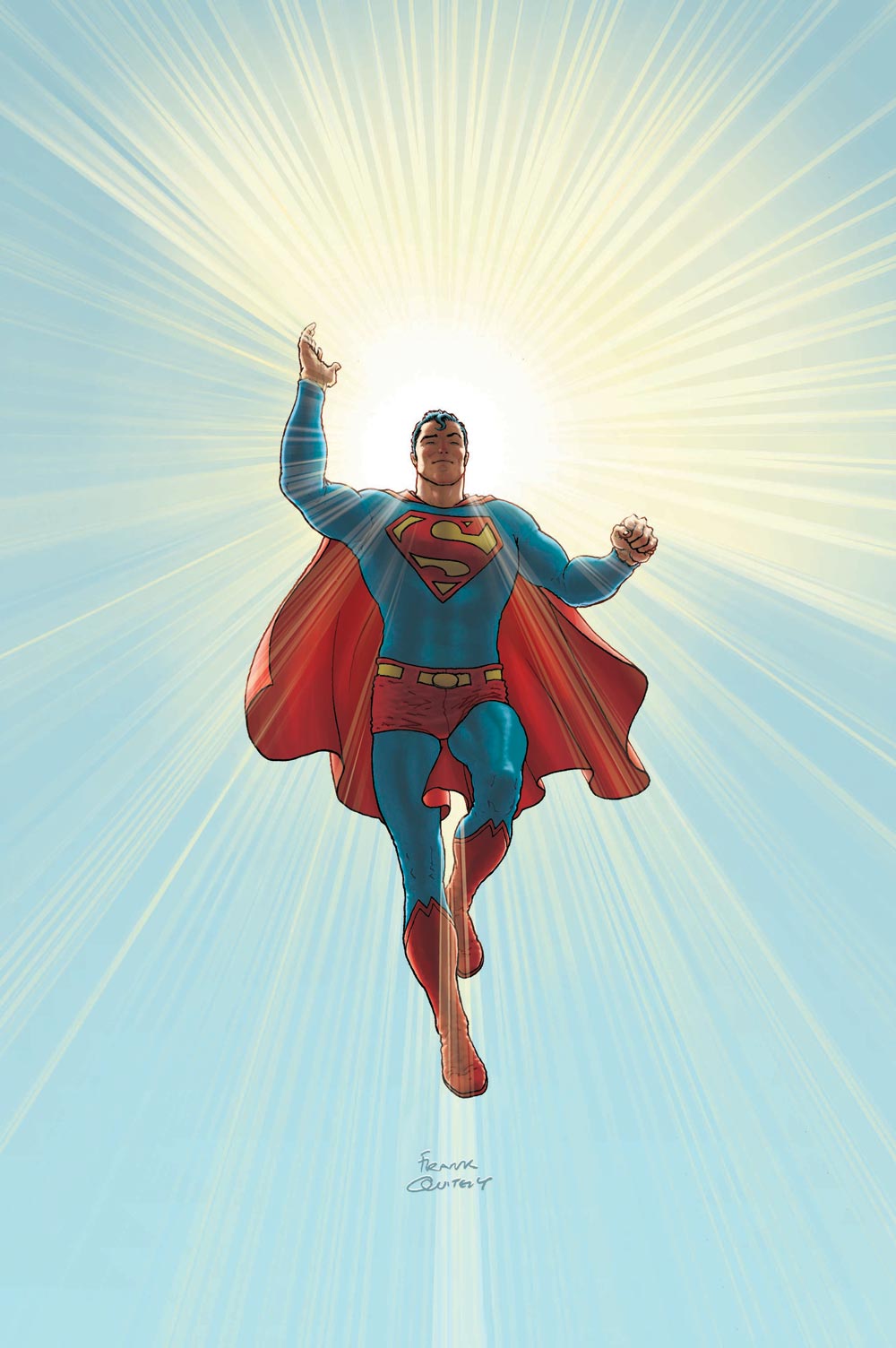 I have previously written about the mutability of myth and storytelling, but nowhere is it more evident than in how Homer depicts the gods. Some Greek myths have the gods be background characters who only appear at the end of a play in order to bring about a change or resolution. The term ‘Deus Ex Machina’ (literally, ‘God from the Machine’) comes from where, in antiquity, a statue of a god was literally lowered down into a play to represent the descending deity who will bring about the play’s resolution. Perhaps, maybe unintentionally, Superman might best fit the term for a literal modern-day Deus Ex Machina in that he drops down from the heavens and tends to be the entity who resolves unsolvable situations.

Still, the term has limits that might not apply to Superman directly. Deus Ex Machine elements tend to appear out of (literally) nowhere and they interrupt the human stories going on in the play. Superman is, according to the comic titles with his name on them, the star … but he still receives his fair share of criticism for being a seemingly indestructible plot device. So, as to the literal Greek gods and their Deus Ex Connections? If you’ve not ever had a chance to read The Iliad, check it out. The whole plot literally revolves around the Greek gods manipulating humans to their own whims, from Zeus who manipulates King Agamemnon to Aphrodite who manipulates Helen. The gods use their powers overtly and it is these powers which drive the plot along, although humans by far have the more interesting responses to everything the gods are doing.

Despite Homer’s version of The Iliad having the gods be proactive entities, enter Euripides. Euripides was a famous Greek playwright who wrote the play Hecuba. The play takes place in the (horrifying) aftermath of the Trojan War and it mainly showcases the deposed former Queen of Troy, Hecuba, as she struggles to cope with the news that her son has been murdered by the man who was supposed to be protecting him. In the play Euripides has very, very little use for the gods and it is only the haunting specter of Hecuba’s slain son who serves as a ‘bridge’ between the human world and the world of the divine/otherworldly. The jump in style is similar to reading something like Grant Morrison’s Final Crisis, one of the most bizarre and flashy/weird of all the DC Comics titles ever created, and then reading Gotham Central by Ed Brubaker and Greg Rucka soon after. The comics both take place in the same DC Universe, however both differ wildly in interpreting what kinds of things need to be shown and explored in order to tell the best story. 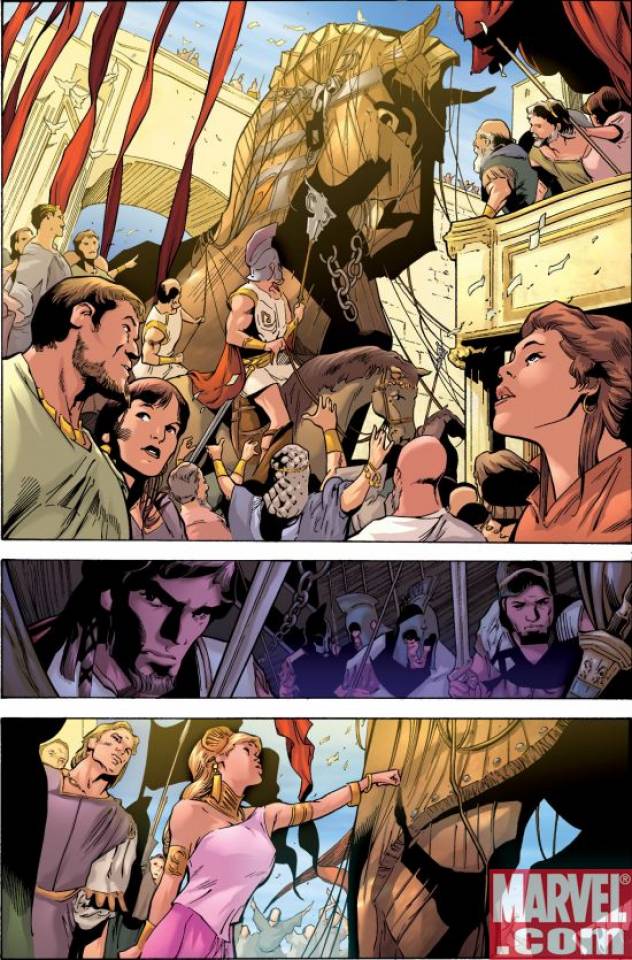 So, with the understanding that Homer’s Greece is filled with gods who throw thunderbolts, manipulate humanity, and engage in wagers against warring nations, what comic showcases this the best? Are there comics which do the opposite? The best comic to date I have found which showcases the majesty of Homer’s vision for the Trojan War is the Marvel Classics series of comics.

Marvel Classics’s The Trojan War (2009) and The Iliad (2007) perhaps exist as the absolute best way of showing off how wild the Greek gods are. The art of Miguel Angel Sepulveda (The Thanos Imperative, Thunderbolts) is gorgeous and it really pops thanks to the coloring of Artur Fujita. The gods are depicted as flowing, elemental beings whose power dwarfs anything that exists in the world of man. The fact that Marvel took the time to create The Trojan War, a comic which covers some extremely obscure elements of the Trojan War story, is something I will need a whole article for, so look for that in the future!

So, in closing, we’ve talked about how Greek myth and comics share some of the same elements. We’ve talked about how different Greeks depicted the Trojan War, and the Gods, as having different levels of supernatural/cosmic involvement, much how the DC Universe can be presented differently by two different authors. Lastly, we got to touch on two comics which beautifully depict the bizarre, deity-heavy world the Trojan War.

In a weird way, Homer was sort of the Jack Kirby of antiquity. While Homer was telling stories that had existed before, much how Kirby was writing/drawing superheroes in a genre that he did not overtly invent, both of these storytellers re-defined their genres through their creativity. Yes, there were accounts of the Trojan War that are pre-Homer and there were superheroes that appeared pre-Kirby… but man, post-Homer and post-Kirby were when things really got good. Having said that, what better way to understand the majesty of the weird without something ‘mundane’ to contrast it?

Next time – the ‘reality’ of Age of Bronze’s Greece, Greg Rucka’s crime/detective comics, and the dynamic that takes place between the world of the overtly supernatural comics and ‘street level’ comics.

COMICS TO CHECK OUT

BOOKS TO CHECK OUT