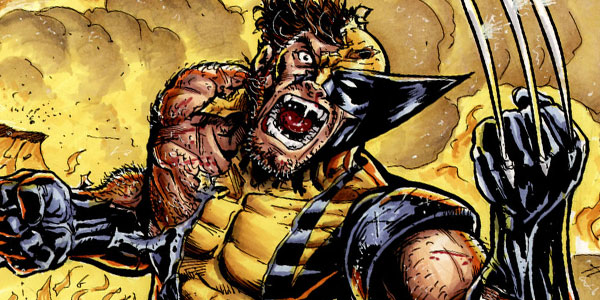 Perhaps one of the most interesting facets of the human mind is our ability to twist one thing into another, i.e. we tend to misunderstand what we think will be a desired trait until we actually get it. Thus, we twist said gift into a curse. 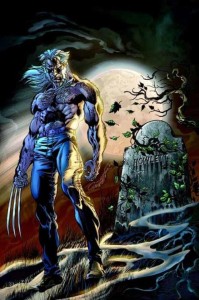 One of the overriding things man has sought to understand is how to survive. While this can be taken at a logical level to be understood as “How do I live healthier?”  it can have more abstract examples, ones like “How do I concoct a potion to grant me eternal life?” The history of these medical and alchemical pursuits has been seemingly built around the idea of extending life, the frantic escape from maladies, physical traumas, and even Death itself. While many have desired the fabled gift of immortality, literature and cautionary tales from ages past have always shown that living forever is not the greatest gift one can desire. In many cases, it is framed as the worst thing that could befall a human being.

Humans are a species with obviously limited sensory perceptions. We can only see what is in front of us and we cannot always perceive that which we have not ourselves experienced firsthand. We struggle to comprehend what might happen to us after we pass from this world because there is literally almost no way to comprehend what “nonexistence” is like. A man might comprehend drowning from having a near-death experience underwater, but to glimpse non-existence? It is a quandary no mortal can fully claim knowledge of and so we fear Death and long for a permanent stay in the world we can grasp and fathom – we want to live forever in this world, the world of the here and now.

No character represents the agony and the miracle of such a blessing (or curse?) like Wolverine. Strangely, his plight has some amusing connections to not only a Catholic Saint, but a literary character written by the song-writer of “The Ballad of the Green Berets.”

The Torment of Eternal Life

The Wolverine first appeared in 1974 as a one designed as a more secondary character, not as the headlining star he would become. Wolverine’s natural tendency towards violence with his particular skillset (having giant claws does not make you useful for hugs and back-patt’n) made him a dynamic character to see in action on the page. Artist John Byrne would be the man historically responsible for saving Wolverine from editorial cuts, thus allowing his fellow Canadian to live on in the pages of comics. Even with the history of his on-paper origins, Wolverine seems unable to be allowed to die.

The dominant origins of Wolverine and his tortured past steam largely from the Weapon X comic run from 1991 and from the 2001 series Origin. Both comics establish that Wolverine’s life is one of suffering, dominantly in the area of the body. While Wolverine does show symptoms of madness and loss of self, he traditionally has always been able to ground himself in what he is (an immortal, un-killable entity). His body betrays his desire to live normally right down to his adamantium-covered bones.

The idea of Wolverine having a tragic background for his immortality is nothing exactly revolutionary to the literary world. Some of the most popular literary characters ever written have presented the idea that eternal life is a loaded dice game against Fate, the Devil, or both. In The Lord of the Rings we have the long-lived character of Gollum whose metal-enhanced lifespan has lead to his being shunned from society and the world at large. While Gollum is obviously in no way the same character as Wolverine, both are cursed by outside objects that extend their lives. What makes Wolverine a more compelling character is his resolute determination to do good with his “gifts” as opposed to Gollum whose grip by the One Ring would not allow him to do good even if he tried it. 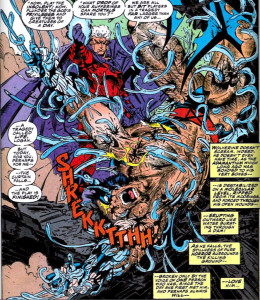 In the longer scheme of stories about immortals, the will and desire to be selfish or to be noble become exaggerated. A soldier who dies on the battlefield for his country is tragic and noble, however an immortal soldier who lives and dies again and again is something else. Perhaps it comes as close as possible to capturing the “otherness” possessed by the heroes of the ancient Greeks? Achilles was a man who was nigh indestructible and was prone to rages and violence (The Iliad opens with his anger being spoken of) and whose life as a warrior, particularly his obsession with it, lead to his tragic end and to his being recalled as a sort of morality tale against living only for the glory of the Self. Counter to that, immortals are often presented in literature as scheming, master chess-styled schemers whose plans have existed for generations to undo society, enslave a people, or even end the world. Wolverine was presented with this kind of villain in Romulus. Despite the glory-mongering of Achilles or the scheming of Romulus, invincible or indestructible characters are seldom wholly good at heart given the inherently tragic nature of their existence.

Wolverine defies this concept. While he certainly has problems, he uses his long life as a way of providing mentorship to others, to assisting his fellow mutants, and to saving the world on a seemingly weekly basis when he is an Avenger.   Still, Wolverine has demons and he struggles with them, particularly in companionship. Wolverine has rather infamously lost many, many lovers and wives, often to the machinations of his enemies or (worse still) his own bastard children. The truest issue for Wolverine to deal with is his inability to be a father, to settle down, and to learn when to withdraw. Wolverine is a violence prone character and his children have been used as villains many times, most notably in the characters of The Red Right Hand group and Dakken.

Like Wolverine, history and religion both have another immortal that was crafted by the mind of Barry Sadler. Sadler took two powerful religious icons from history and blended them together  in 1979. The first was the Saint known as Longinus, the centurion who speared Christ’s side. The second figure taken by Sadler was “The Wandering Jew,” a figure whose origins are extremely varied but whose point remains the same – he is a figure who will walk the Earth until the Second Coming. Sadler combined these characters into one, creating an immortal soldier who would be doomed to wander until Christ came back. Sadler was himself a soldier, a wounded-in-action US Special Forces serviceman who was wounded in Vietnam. Sadler is perhaps most famous for his creation of the song “The Ballad of the Green Berets.” Sadler used his extensive military knowledge and passion to create stories for the immortal centurion, stories which became known as the Casca Series. Sadler and the minds behind Wolverine’s tragic past both present the same notion – a man is what he is, forever. Wolverine and Casca are both soldiers as well as immortals. Wolverine has always been presented as a combat-oriented soldier, not explicitly as a teacher (however, plots where he must lead or work with the young tend to be played for some of the better comedy Wolverine’s character can offer). 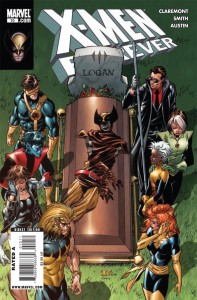 One of the greater responsibilities of being a soldier (as opposed to being a warrior) is that you fight for a cause and for a country exclusively, even if it might conflict with your own ideals at times. Wolverine has soldiered for Canada, America, the Allies, and Mutants. He has been a taker of life for untold ages, always being unable to die himself. The responsibility of that power has been presented by different writers to weigh on his character, yet like any good soldier he keeps going. The humanity of Wolverine has always, in the end, being his most flawed and endearing trait. While his battle-violence causes him to be one of the most dangerous mutants in close-hand combat, he has made close friends, helped the cause of his species almost more than any other mutant, and he was tried his best to guide others away from foolish pursuits of eternal life.

Wolverine is a character who has suffered countless re-births, like Superman, because he is incapable of truly dying. Yet, unlike Superman whose moral fabric has always been inspirational, Wolverine has been different. As a killer and soldier, Wolverine is a more dark view of man’s nature where-as Superman is more noble. Both are seemingly invincible, yet each uses Death and Immortality to present different lessons. Wolverine repeatedly comes back to soldier for his friends and allies because that is what he is. Superman’s death and resurrection was a great build up to the revelation that Americans had for his character. Wolverine’s popularity has maintained itself through decades and does not seem close to dying off now. He is more human, more violent, but he is also (in some ways) more noble. He has a vast amount of flaws yet he retains his goodness and his spirit of assistance to those who cannot defend themselves.

While Wolverine and his curse/blessing of repeated deaths and resurrections does not represent all the traits we should embody, his spirit of never giving in is certainly one to ponder. Do we give up after one set-back in our lives? Do we suffer “death” to our dreams and then refuse to resurrect them? How easy do we give in as opposed to how hard we fight back? Wolverine, for all his faults, does at least represent a character whose determination we can all emulate from time to time.