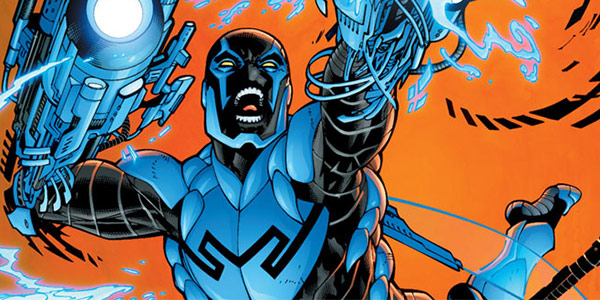 In this series, we have examined the tragic pasts of heroes and the heroes who struggle with emotional complexities. While the emotional state of heroes, but sometimes heroics are more than that. Sometimes heroes are defined by the gifts and favors granted to them by forces divine or foreign. Heroes having access to extraordinary objects that enhance their mythic status has been among the defining artifacts in Western myth and it has also come to have some remarkable instances in comics. Among the more fascinating aspects of these heroes — that of acquiring the power of magical artifacts — is in how their dominant aspect is to bring order from chaos via violence. The important part of the story then becomes how this violence is used, how heroes build upon the order they establish, and if the object makes the hero or if the reverse is true. In the ancient world, these issues are best brought up in dialogue regarding the hero Perseus and Theseus.

The Slayers, the Order Bringers 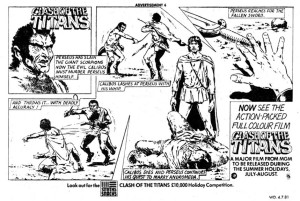 When heroes are often mentioned in Greek mythology there is one story that involve the dominant use of magical gifts and objects – the myth of Perseus. In short, Perseus was born the son of Zeus and the Princess of Argos, Danae. When Danae’s father, Acrisius, found out about his impending demi-god grandson he over-reacted in true mythic Greek fashion – he threw his daughter, entombed in a bronze chamber, into the sea along with the baby. Fortunately both were found and taken in on the island of Seriphos and it was there Perseus grew into an adult. Perseus would go onto be tasked with one of the most impossible trials that could befall a human : to slay the gorgon Medusa, a nigh-invincible monster that had wrought suffering on all who had ever faced her. Perseus, guided by multiple deities, comes into possession of a special blade, a mirrored shield, the helm of Hades, and winged sandals. With these important objects it was possible for Perseus to slay Medusa, take her head back to all who had insulted him in the past (turning them to stone), and setting himself up as a paramount hero.

These objects granted Perseus the ability to fight back monsters, the symbols of chaos and discord among mortals and gods alike. Medusa herself was the manifestation of strife/rape/humiliation between a mortal and Poseidon. In most accounts, Medusa was confronted by Poseidon who then took advantage of her in Athena’s temple. Athena, instead of blaming Poseidon, blamed Medusa and cursed her. This version of the story then has Perseus destroying a physical manifestation of the god’s misfortunate and strife (which unfortunately involved poor Medusa’s fate) and setting things right. Perseus was capable of using the tools of the gods to restore order and to also begin the foundation of Greek kings who would be known as the Twelve Olympians. The objects were one huge, defining part of what made Perseus capable of being a hero, although by his demi-god nature he was certainly destined for greatness with or without them.  Perseus and his various magic objects assisted a higher power in bringing order to the world he knew and loved. Perseus was also a part of a bigger narrative, a heroic history, and his story and how he used his tools were what made him famous … a lot like Jaime Reyes, the third to don the mantle of Blue Beetle. 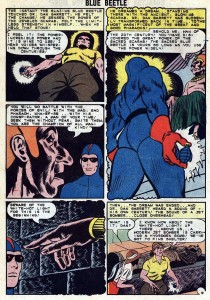 Depending on the age of the reader, mentioning ‘Blue Beetle’ will make a person think of three different people who have used the title in DC Comics. The first (and oldest) is Dan Garret, the superhero who gained his abilities to fight crime from a magical blue scarab. Next then is Ted Kord, head of Kord Industries and the only to take the name without the magical device, hence his inheriting the Blue Beetle title from Garret in a more solitary fashion. After the death of Ted, however, the scarab was used by the third Blue Beetle, Jaime Reyes.

Reyes himself proved to be a substantial shift in the normal ‘super hero’ story, mainly because of the fact he openly told his friends/family who he was. To Jaime the idea of a ‘secret’ identity was more of a liability than revealing his secret. Next, the scarab in the mythology built around Jaime showed itself not to be magical, but rather extraterrestrial. This factor then literally made Jaime a kind of ‘ambassador’ from another world but without his knowledge. Unfortunately for Jaime, this ignorance would prove dangerous when the creators of the scarab eventually targeted Earth — and the Blue Beetle host — for their own conquest.

Jaime has some unique connection to Perseus. Both Perseus and Jaime had those they supported or protected, both of them were rather young heroes (only youths), and both were inducted into their heroic careers by being asked to do something that was impossible. While Perseus slew Medusa it was up to Jaime to take on a creation of Batman – the Brother Eye satellite. In a sense the ideal of the magical object from the higher power is that is ‘reveals’ things to the worthy. In the case of Medusa, it was the shield granted to Perseus that allowed him to gaze on her lethal reflection. With Jaime, it was the fact that the scarab allowed him to find the untraceable satellite and then to disable it so others could take it out. Both Perseus and Jaime ventured into the literal unknown and returned as a hero: fairly standard Heroes’ Journey stuff.

Jaime’s bond with the scarab granted him powers that afforded him massive strength, bodily protection, flight, and devastating weapons at the up-close and long ranges. He was, in effect, a walking weapon that was certainly comparable to the image of Perseus who could fly, was invisible, had a magical sword, and tamed monsters. But while this idea of the scarab bonds Jaime and Perseus, their magical items also tell a different kind of story when culture is examined, a story that is not gentle nor virtuous.

Guests, Foes, and the Issue of Hubris 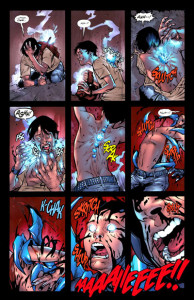 Like many famous lessons from the Greeks, readers must be aware of the events of the Trojan War and the warrior Achilles. The Trojan War began while, as a guest of the Trojans, Prince Paris of Troy fled in the night with the Spartan Queen, Helen. This was a horrible action that was a breaking of xenia, the rite of “guest friendship/hospitality.” Xenia is a particularly ancient old-world tradition and it means that, while a guest in another’s home, you are afforded certain rights and that you are also afforded protection so long as you do no harm to those under whose roof you sleep. The breaking of xenia allowed the Trojan War to begin (in part as well because of the meddling Greek gods) and it is here we must turn to Achilles. One of the things that made Achilles particularly powerful in battle was not just his magical body (being dipped in a magic river will do that to you) but also his armor. This was not just any armor, it was armor crafted by Hephaestus himself and it was a marvel to behold and to see in action. It made Achilles all but invincible, a fact that was not unknown to Achilles’ fellow Greeks, Odysseus and Ajax.  The two became involved in a particularly gruesome struggle for the armor that ended with Ajax being cursed by Athena after he in turn had cursed Odysseus, the man who won the armor via debate. Odysseus then awarded the armor to the son of Achilles. This concept of passing down magical objects in Greek myth, as well as xenia, has some powerful parallels to Blue Beetle.

As was stated earlier, Jaime was the third Blue Beetle. A large factor in the legacy of the character was his invisible bond to Ted Kord, the man who wore the scarab before him. Jaime, like the son of Achillies, felt he had impossible shoes to fill. Greek lore is filled with heroes who find their lineage, physically or spiritually, has been a part of something larger than themselves. Perseus and Achillies, both men who were granted impossible tools to do impossible deeds, knew this and they each took their lives into their own hands when they were young. Both men had a bond with powerful fathers, Zeus among them, but also with their human fathers. While Jaime has a wonderful connection with his family, Ted became a spiritual, heroic father to him (or, who haunted him, depending on one’s comic history). 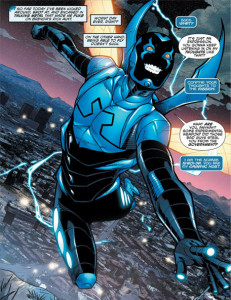 As a bearer of the scarab, Jaime became an unwitting agent of the Reach, a powerful alien species who infiltrated worlds to undo them in secret rather than overpower (this being because of a tiff they had with the Guardians of Oa and the Green Lantern Corps). The way they solved this ‘hiccup’ was to send scarabs into the universe that would then bond with sentient individuals of planets. These individuals would become heroes, saviors, and they would then prove capable of allowing the Reach to invade the planet diplomatically and overtly. The very power given to Jaime was a violation of the Earth’s xenia, it was a cultural trick. Jaime became embroiled in this conflict and found himself competing against his own scarab and fighting off the invading Reach army. The violation/deceit of the Reach, compared against the actions of Paris and Helen, have a universal theme – one cannot simply do as one wants without consideration of others. The world flourishes when it revolves around order, hospitality, and honor. Jaime eventually bonds with the scarab as it becomes ‘individual’ and he also finds kinship with Booster Gold, Ted Kord’s partner and friend.

The Reach’s actions in violating Jaime and trying to claim the Earth showed that magical gifts can have a terrible price. Achilles’ armor was the cause of strife between two famous Greek and it literally drove Ajax towards his own suicide and a legacy of dishonor. At times, the lust for objects and for the power we think they can bring us is too much. What made Perseus a great hero was that he fought for his people, the Achaeans/Danaans just as Jaime fought for Earth. While it is true that magical objects bring order to the world in myths, the principles of her heroes who wield the objects, as well as those who inherit them, are what matters more. If you ever want to see where hubris is concerned with magical gifts, look at the story of Bellerophon and Pegasus.