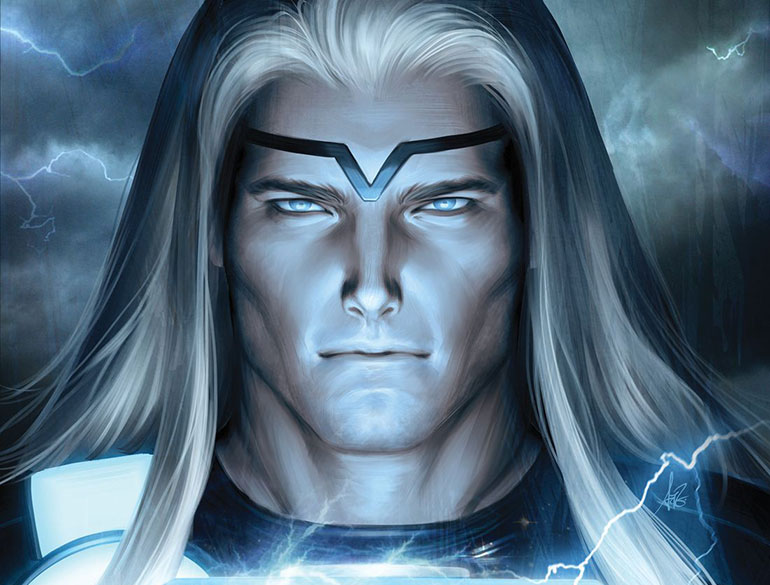 Thor is a character who has long held a unique place in graphic/textual history as both a “comic” character — he was the creation of Stan & Larry Lee and Jack Kirby for Journey into Mystery #83 in 1962 — and as a religious/mythological figure. Few beings of genuine religious and mythological status (in the Western pantheon at least) have as much traction in our pop-climate as Thor does, in no small part to the decades of his comic appearances. And, it should be noted, because the Marvel movie machine hit gold when they managed to nail Chris Hemsworth for the physical part of the character and then attached him to films helmed by so many creative directors. 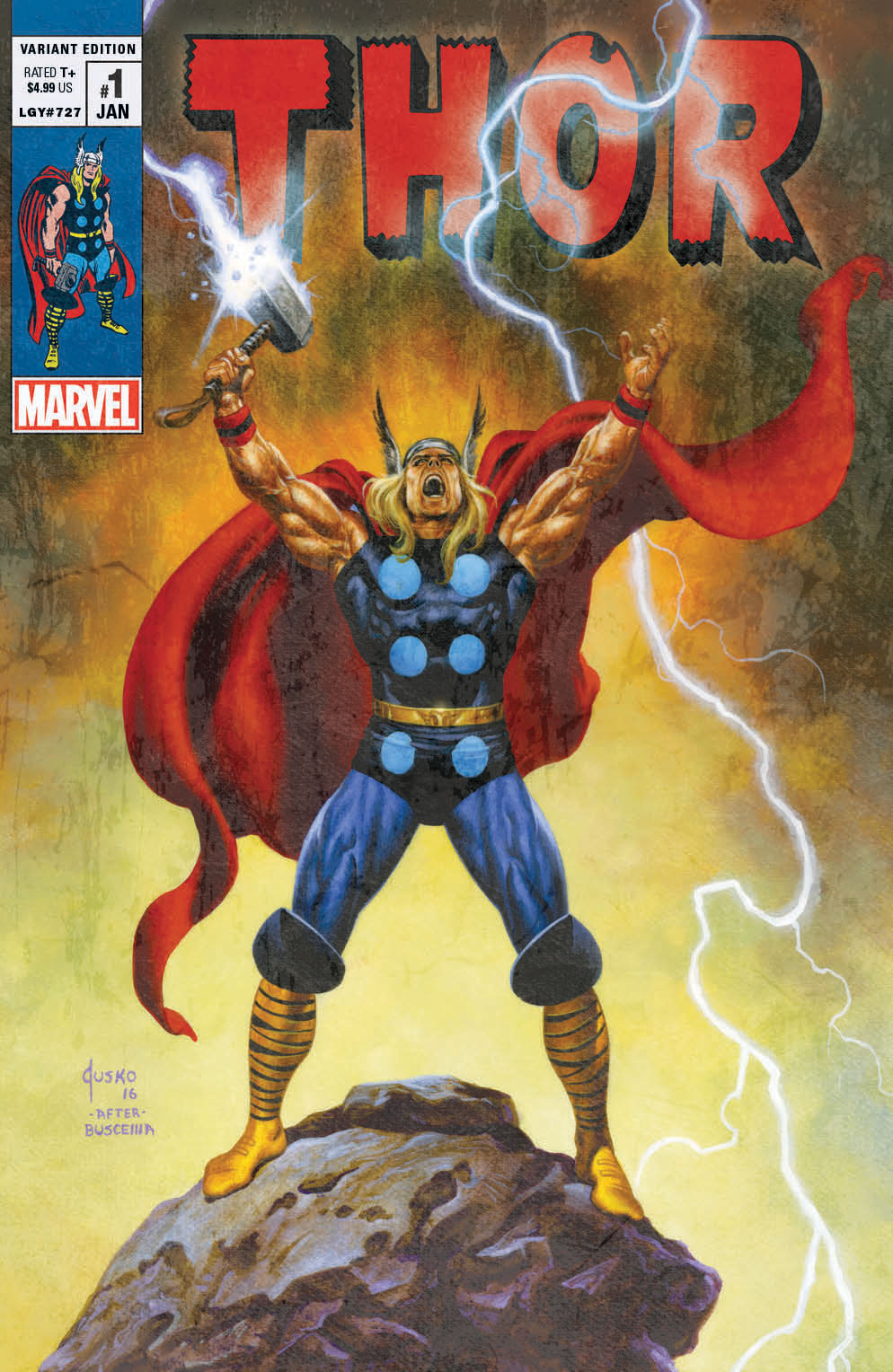 As Stan Lee himself exclaimed when reflecting on the creation of the character, the secret to what made Thor special was his non-human qualities, the idea was:

Don’t make him human — make him a god.

I have always loved this quote because of how much that element really mattered to not only who Thor was as a character, but also because of “what” the idea of a god meant in terms of narrative storytelling.

One of the more grueling challenges with, let’s call them “mundane” comics — i.e. comics about mortal threats and dangers — is that the nature of human issues exists outside the realms of religious cause and effect which does not obey any real set of hard rules. If there are gods in the universes of comics, they can’t apply their abilities or be sought for wisdom naturally. Their responses depend only on the actions of the writers. 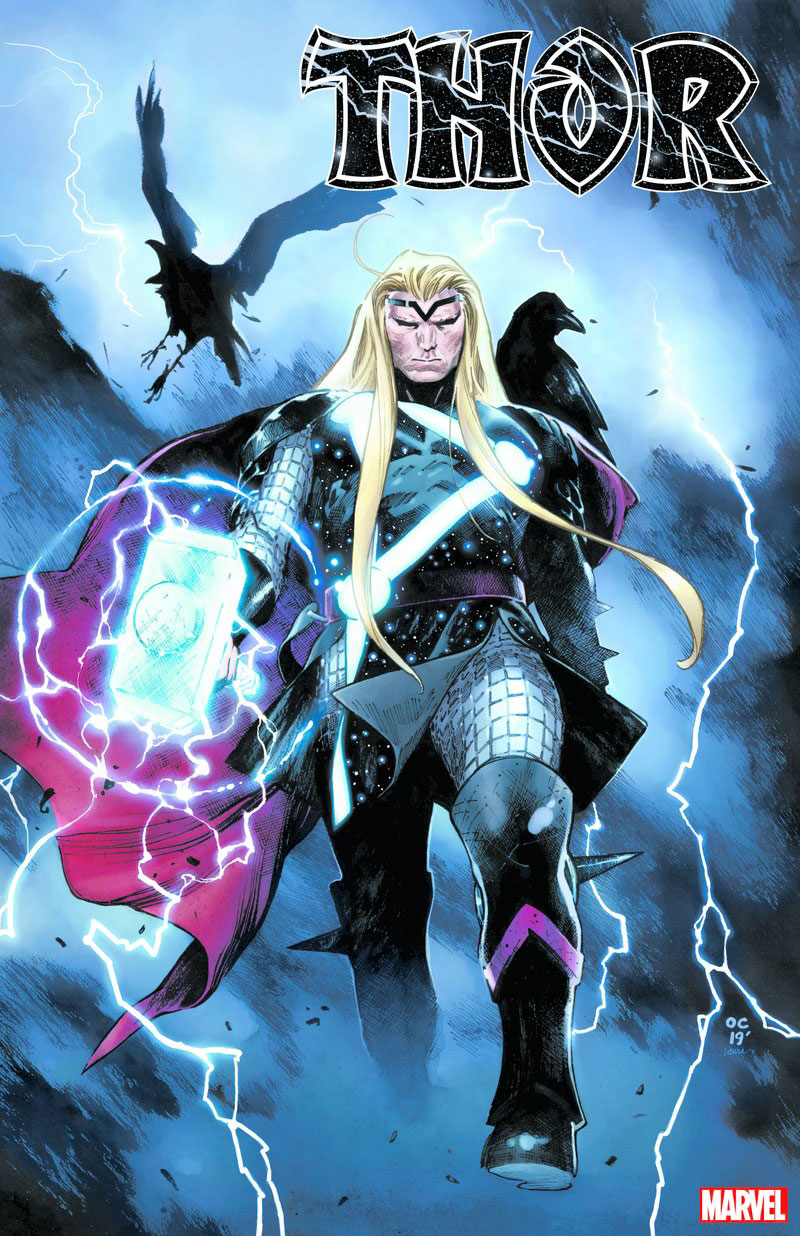 What I mean to say is, the kinds of things people turn to religion for, things like peace, hope, faith, courage, etc.? These things are awarded to characters who pray to the gods or denied them exclusively as it benefits the story and nothing else. It’s rare to see religious interactions between mortals and the divine world in a mundane manner because these things don’t happen in our world. We have no parallel for correlation. If we “casually” saw an angel or a demon while turning on the TV or while walking down the street, we’d be positive that something life-changing was about to occur.

So, in comics, there is a sense of “every-day-ness” to the interactions of the divine and mortal worlds, but almost always these things are showcased in books focusing on divine/spiritual heroes.  To explain with an example: while Spider-Man knows Thor is “real,” Peter will never turn to him for faith-based guidance in his own comic. Likewise, Daredevil won’t normally ever do this either in his own book – why would he? Thor has no naturally occurring place in a Daredevil book … however Thor and Heimdall do interact and talk about shared faith in the War of the Realms event. 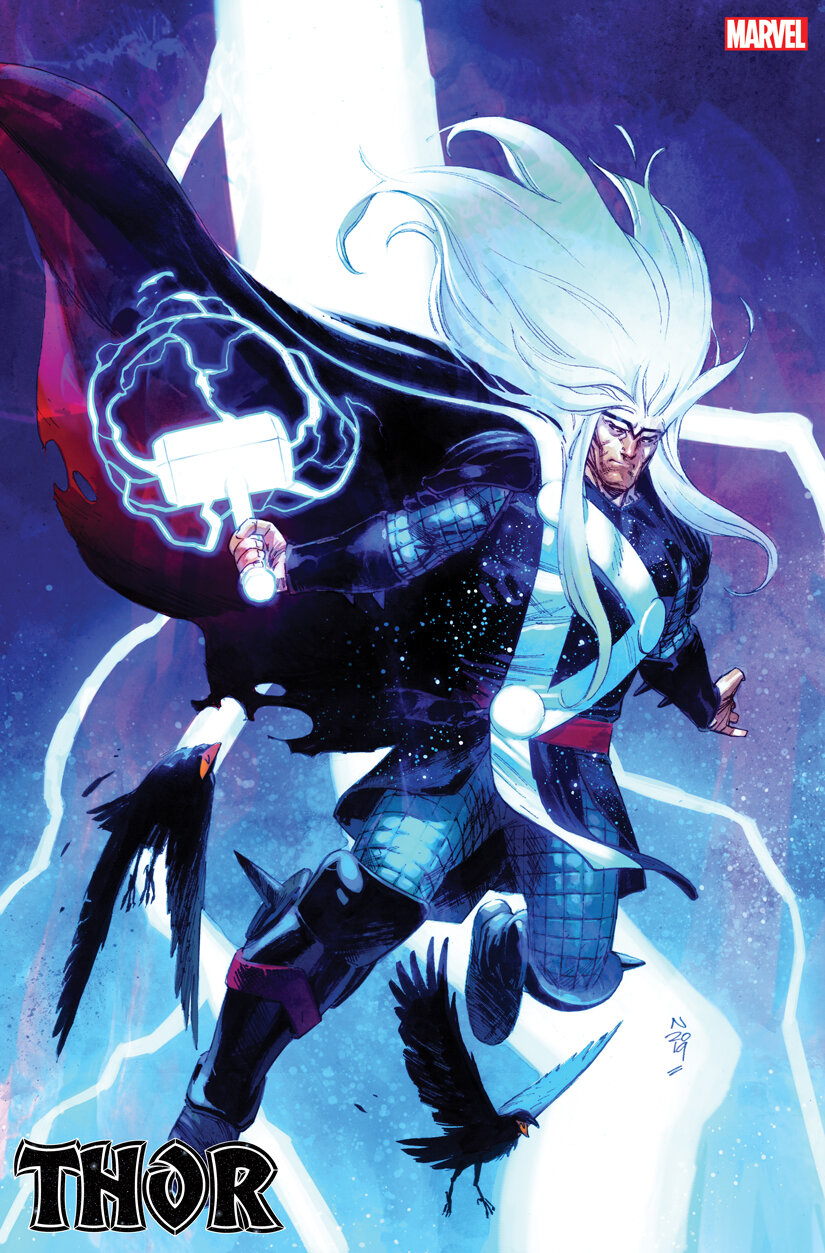 Will this ever come up again? Probably not, because such events and engagements don’t match up with tonal or story themes in either book. Earth-level, petty crime isn’t typically the “focus” of a divine-themed character like Thor, just as cosmic, epic sagas are not the same kinds of things Matt Murdock deals with.

What divine characters like Thor do best is grow and adapt. I don’t believe I am making a groundbreaking statement when I say that virtually no religious text has remained purely static since its inception and transcription from the ether of consciousness to the tangible world of text, papyrus, leather and paper.

As an American writer I feel I have the space to comment on the dominant text of my own culture, that being the Bible. The number of changes this “one” (i.e. two, if you’re traditional, “copious” if you’re more realistic) book has undergone is so numerous that there are whole fields of study dedicated to figuring out what book was made when, and why it as included where in the canon it was, and what translations did or didn’t change, and countless other questions of this type. 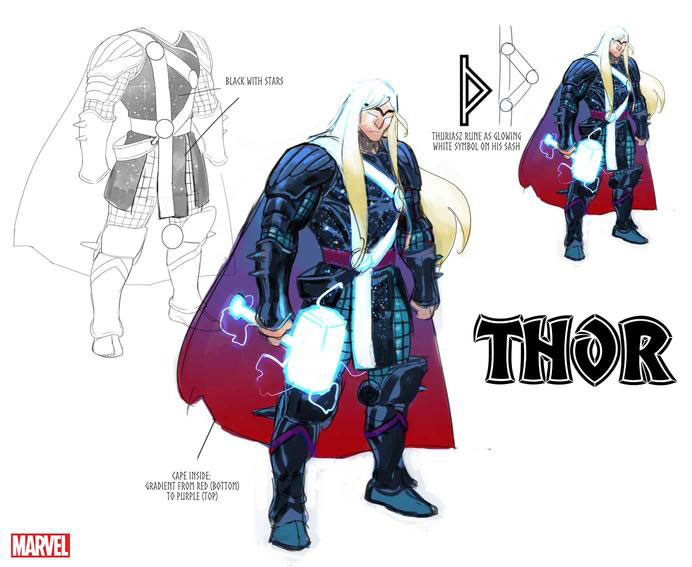 I am not trying to argue that a comic work like Donny Cates’ and Nic Klein’s Thor #1 is a religious text in the same manner as the Bible, but I do want to point out how individuals, councils, countries, and groups of all kind have frequently updated and changed the language of the text for all kind of ends (clarity, ease of reading, meaning, etc.). The “Thor” that Cates introduces readers to with the start of his story is not too dissimilar from the Christ which one might encounter if you pick up a New King James Bible and a New International Version Bible and then read them side by side.

“What” Christ is does not change between these translations, just as how Thor, in a way, has not changed in his transition from Lee, to Stern, to Straczynski, to Gillen, to Aaron, and now to Cates. Thor is blond, muscular, kindhearted, fierce in battle, loyal to his allies, and a dedicated warrior who values both Asgard and Earth equally. While, yes, tonal and stylistic elements (such as Thor’s reliance of traditional mannerisms of speech and his attitude/disposition) might change, the core values of “what” Thor is do not change. This is why he is Thor, just like those readers who want to compare a New King James and a New International version of Christ alongside one another won’t find much difference in the overall nature of “what” Christianity is.

“Now, wait a minute, wiseguy,” I can hear some of you hypothetical readers thinking, “I thought you said gods evolved, but you’re making a point that Thor is doesn’t really change. What gives? Get to the point!” 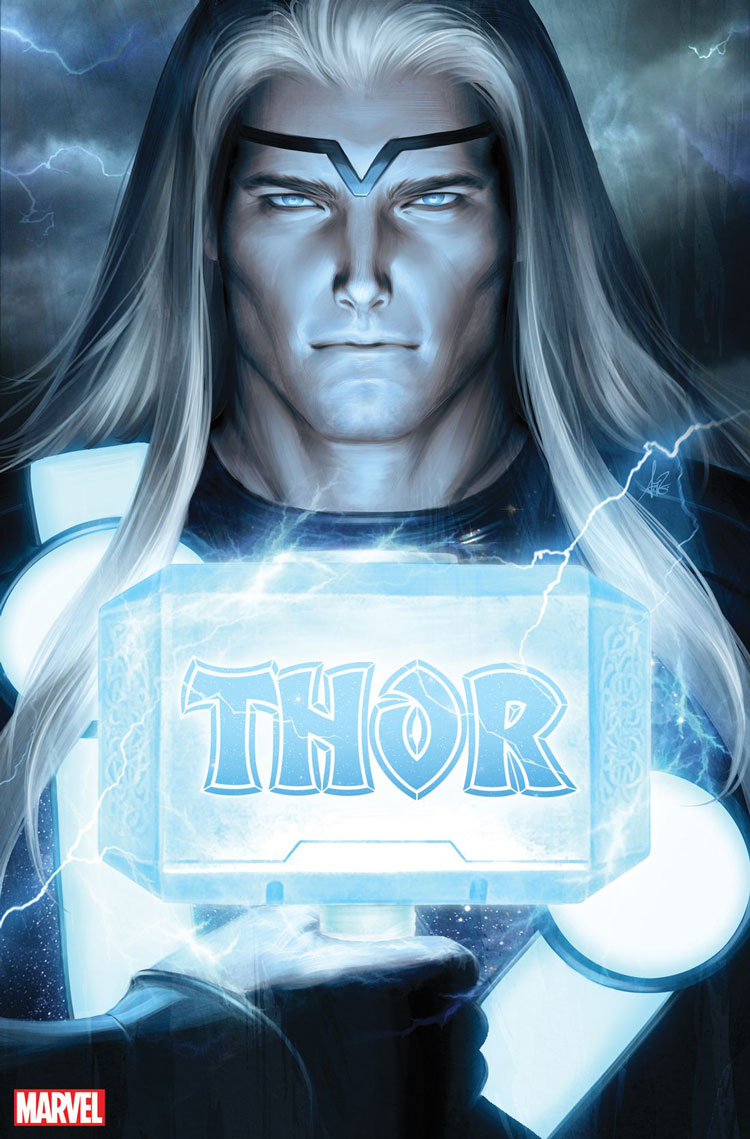 Comics, unlike normal religious texts, undergo countless changes and adjustments as they’re edited, re-used, shared, and marketed on a rapid timelines. These are characters who do not exist within the editing hands of the faithful alone, no, they’re forced into new shapes and roles all the time, some of them being better fits than others.

Most of the time these kinds of changes are when a character, like say Captain America, is put into a book or a situation where he doesn’t normally “fit,” such as when he is paired with Jubilee in A+X #12. This title is not a “Captain America” book, nor is it typical of one he would appear in, but the changes he must undergo to fit within the book are basically non-existent. He remains the same Cap he was at the start as when the issue ends. This is because he was not required to undergo a transitory transformation.

If we know then what a transitory transformation is not, let’s consider what one of these is and what it does. 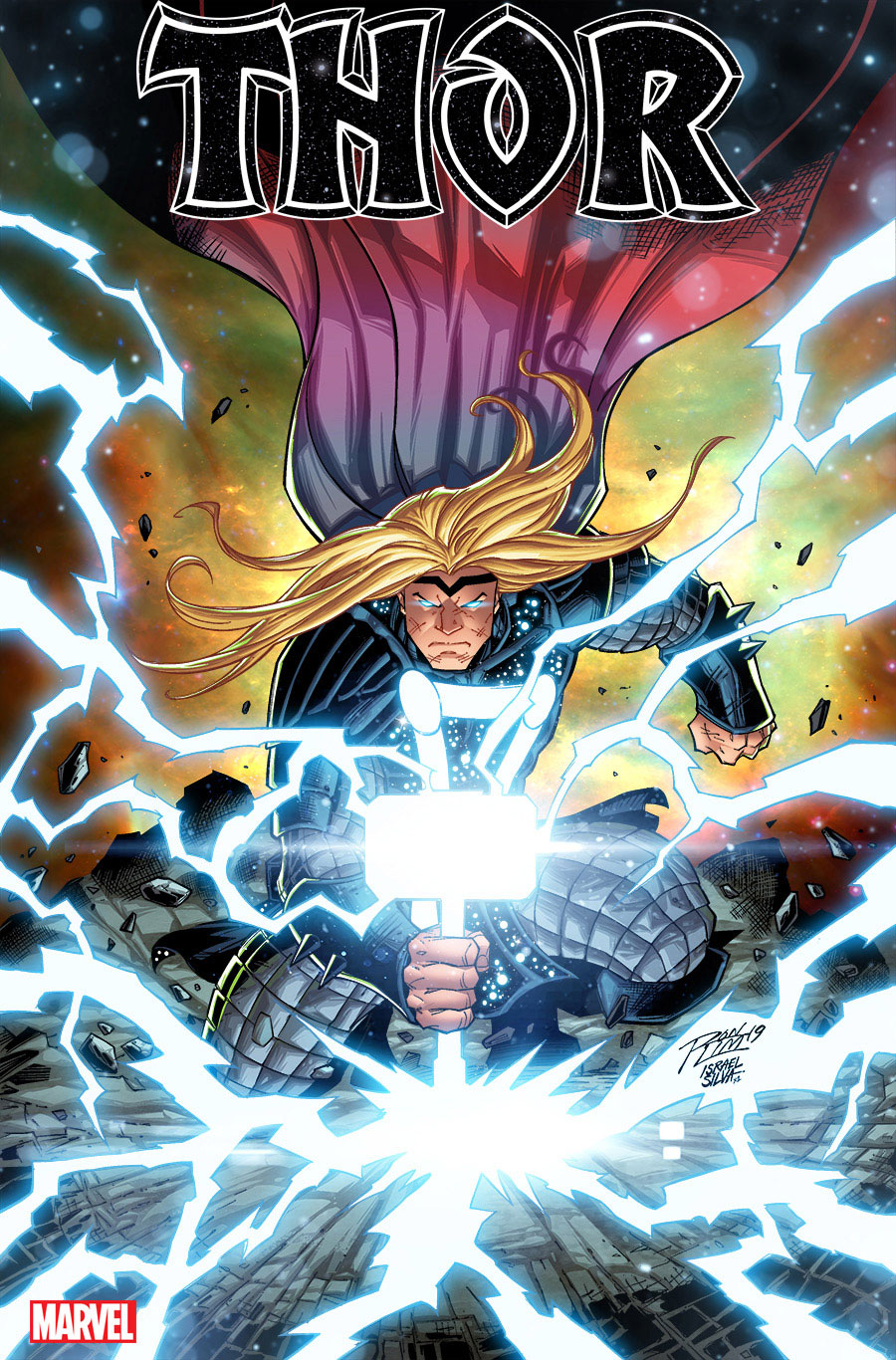 Consider the amazing and genuinely thoughtful transformation Thor had when he was pushed into his status as an “unworthy” deity by Jason Aaron and Esad Ribic’s Thor run. Thor’s arm(s), his (lack of) hammer, his attitude and mood, it all changed to accommodate the fact that a new kind of “religious” transition was being designed for Thor so that readers could experience him in new ways, all while it should be noted that none of his core attributes that  define the character proper changed. The things that changed were akin to “just” stylistic changes, yet they served a purpose other than just being a new wardrobe.

Transitory transformations are changes made to characters as they leave and enter the new canons of the writers who pick up their souls and then set them back down again when the dogma of their plots have ended. At this time, Thor is undergoing one of the biggest and most unique transitional transformations of his existence, or at least one certainly on par with when he and his Donald Blake identity were separated and done away with (an example of a currently permanent transitory transformation which accommodated a new reading testament for the character). 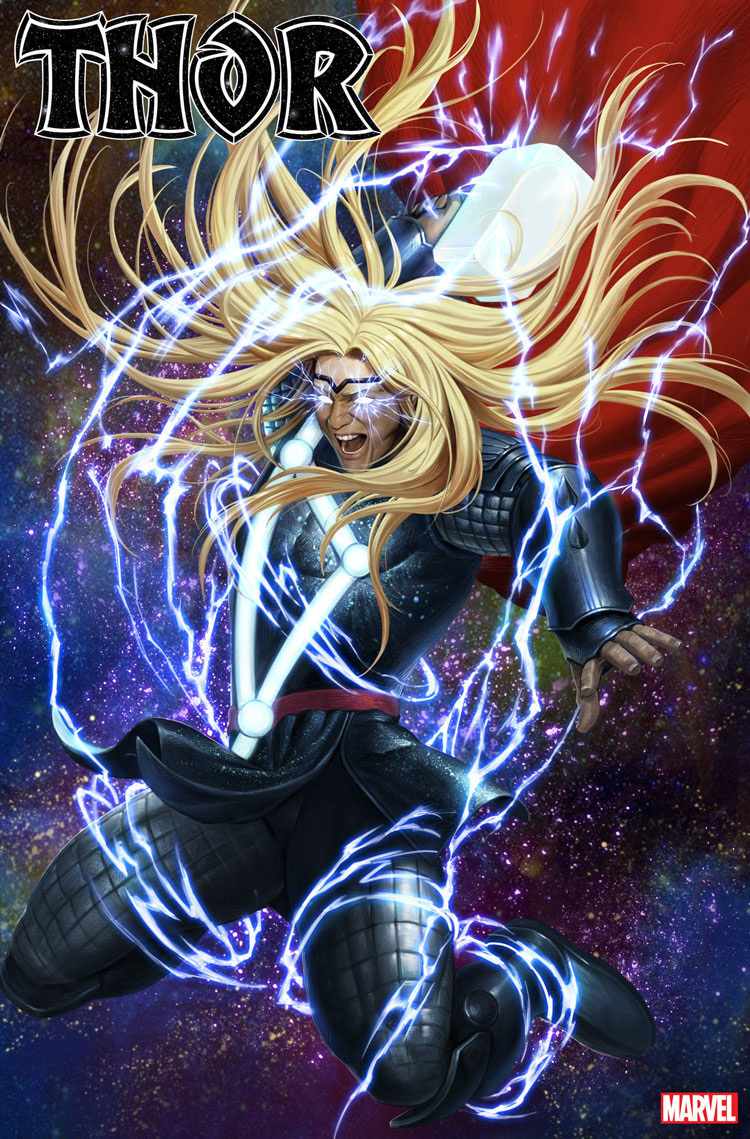 “Now, wait a minute, buddy,” I can imagine some of you hypothetical readers saying, “I thought you said divine characters ‘grow and adapt’ the best, but you’re turning to Captain America as an example for goodness sake. He isn’t divine. And what does ‘best’ even mean?”

What I mean by “best” is, simply, that the idea of rebirth and resurrection are more natural in stories relating to deities than they are with “mortal” and “everyday” heroes. Even if you, as a reader, cannot accept the simple narrative devices that might get a character to and from the points in the story that call for a DEATH and REBIRTH, you can’t deny (easily, anyway) that divine characters are supposed to undertake those kinds of journeys. They’re gods, not morals. They’re arguably the only class of character qualified to partake of the revolving door that is comic writing’s resurrection and destruction merry-go-round. Even characters who are “empowered” often do not get the same credibility pass for their deaths and resurrections as divine characters.

To illustrate this, let me once again prove a point by showing an example of a resurrection I feel was not only un-earned, but un-suited to the kind of being the character in question was/is. In the aftermath of the recent Annihilation: Scourge mini-event, Richard Rider died and was quickly resurrected by Annihilus at the very close of the comic in an almost too-funny-to-believe-it wrap up sequence. Rider is far from a divine character, so this ending, such as it was, had no emotional weight behind it. However, to be fair, it did happen. But, was it the best? I’d argue that, no, it was not. 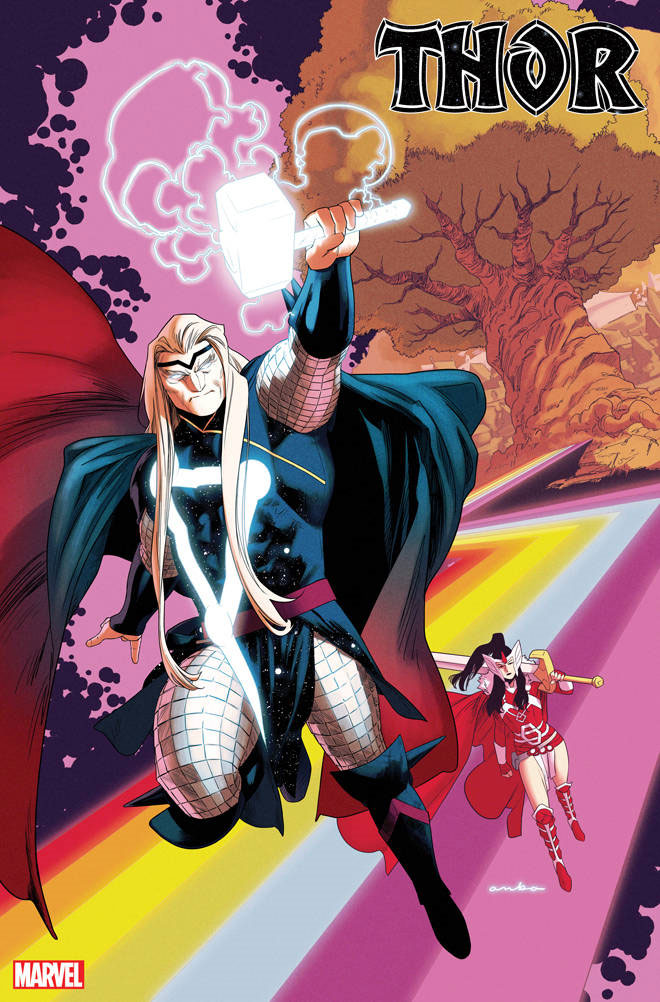 Likewise, to show how the opposite, effective end of the spectrum, consider Thor’s time with the World Tree in the climax of the War of the Realms event. Thor, upon giving himself and his hammer to the universe, undergoes a kind of death that opens himself (and his hammer) up for re-birth. His resurrection alongside his hammer is fitting and earned because he is transitioning into a new role as King Thor, King of Asgard.

When Lee said to make Thor a god, I’d wager, he meant that he needed to be special, he needed to be capable of more than what simple heroes could do and be. Simple heroes can, have, in many ways always will die and be resurrected. There is nothing wrong with this, and there are times when these kinds of resurrections hold serious emotional weight worthy of enjoyment. However, when we have divine characters like Thor undergo death and resurrection, it’s meaningful because it touches on what we need gods to be. There will always be a space in our souls for gods among those who seek them, but we need to know these figures change and grow to accommodate new languages, new ideas and new spaces.

While comic book characters like Thor are in many ways very much not the original figures they’re based upon, they still hold power in our imaginations and spirits. The Thor of ancient Norse myth underwent a transitory transformation when he became the Thor of Marvel Comics, but the beauty is knowing he, like other divine figures, won’t be forced to remain in this state. He will always be free to be pushed into new spaces, to undergo new adventures and to empower our spirits with new tales from now to, god willing, forever.