Happy Holidays and all that jazz, it’s time for the Honor Roll! This week covers the releases of December 19, 2012, one of the strongest weeks on record. This Honor Roll could have easily had 9 or 10 titles, but I whittled it down to the top five. As always, sound off in the comments section: what was your Honor Roll for December 19? 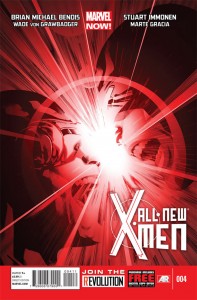 After an issue that I considered to be a bit of a ‘blip’ compared to the first two, All New X-Men is firing on all cylinders again and I am loving ever minute of it. Immonen’s art is absolutely fantastic, with some panels that are straight up jaw-dropping. I’m a fan, I won’t hide that, but this is a whole other level. He’s getting better by the day it would seem, and we are reaping the benefits. Above and beyond the art, Bendis is writing the hell out of this book. There is magic leaping from the page whenever the ‘Young X-Men’ are in a panel, and to see young Hank step up was a fantastic time for this Beast fan. This is a riot to read, and a book that I’m fine if it double ships, weekly ships….I’ll take hourly if Immonen’s hands can handle it.

I want more of this. Now. As fast as Francavilla can write and pencil this, I want to read it. This has all the fun of Lobster Johnson, which I loved as well, but with even more zaniness. There is a ton of humour in this noir book, and it may have been the most flat out entertaining book of the week. If you enjoy Hellboy, Lobster Johnson, or Deadpool, even, check out this comic book. You will not be disappointed. Francavilla’s art is at his best in this comic, and he is a top flight talent. This comic has a fun script, fantastic pencils and is definitely worth checking out. 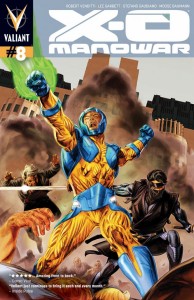 Robert Venditti, you just don’t let up. This comic hasn’t slowed since the first issue and #8 is as high octane as it gets. X-O is a very well crafted title, with Venditti locked in to these characters. Aric is arrogant and headstrong as ever, with Ninjak personifying the cold, calculated killer. Garbett’s art is solid, and compliments the story well. Planet Death is coming, and you want to be reading this title when it hits.

This issue is dramatically stronger than the first, digging deeper into why this team has come together and just how volatile a crew this is. Hopeless writes a cryptic Cable, a man who will not reveal his master plans, but is weary and just wants a break. He is stoic righteous, and Hopeless does a good job of never really confirming whether or not this character is completely off his rocker, or the only person in the Marvel U that is ‘right’. Hope, Domino & Forge provide some fun moments throughout the book, and there is a great couple panels with Cable and Colossus that have made the Colossus character more interesting than he has been in years. Larroca’s art is solid, as per usual, and I am looking forward to a lot more of Cable and X-Force.

Carol Danvers and Monica Rambeau going toe-to-toe with a mecha-beast. What more do you want? DeConnick’s dialogue, as per usual, is on fire in this comic book and Dex Soy’s art is getting more confident by the issue. At first, I found it a little jarring, but, now it is what I want Captain Marvel to be. His artistic style has defined this character for me and his pencils in this issue are superb. This comic is a lot of fun, and DeConnick’s energy and love of this character shine through on every page. This has been a great series so far, and issue #8 is no exception. I have a feeling that this won’t be the last time we see Danvers and Rambeau in this title, and I can’t wait for more.