This week’s Honor Roll is a real mixed back of publishers, with both of the Big Two getting titles on the list, as well as Dark Horse and 2012 upstart Valiant. Without further ado, let’s dive into the weekly honors… 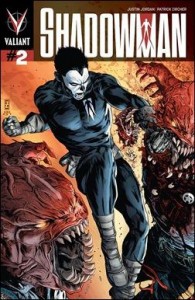 I greatly enjoyed the first issue of Shadowman, as I honestly have most Valiant books, and issue #2 did not disappoint. Patrick Zircher is one of those artists that can pull me into reading a book I normally never would, and Shadowman is exactly that. It has some spooky horror elements that I usually do not gravitate toward, but Jordan and Zircher are doing a really good job of keeping a thriller tone to the book and not going full on gore. Zircher’s art is fantastic, and really takes this book to the next level. I would recommend Shadowman to anybody who likes a darker superhero thriller, or any of the other titles Valiant has released so far. I’m very curious to see where Jordan and Zircher take this book next.

So…if you frequent the site you’ll notice I reviewed this one more fully here, but it has to make the Honor Roll – it’s that damn good. Upon a couple more reads since the review, I’ve become even more enamored with this comic. Hickman has a lot of subtle threads being woven already, and as anyone who has read F4/FF knows, he plays the long game which I am totally fine with. His graphic design in the book is one of the most intriguing things I’ve ever seen in a superhero comic. Who are all the other dots in the spokes of the Avengers diagram? Why have these particular characters come into play? How will some of these characters perform as Avengers? Who are these villains? SO MANY QUESTIONS! This is a book I’m glad will be double shipping, as I really do not want to wait for more. 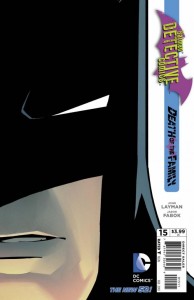 Okay, I’ll admit to something: I wanted to tear this book to shreds once I realized it has virtually nothing to do with Death of the Family, but I realized I liked the comic too much to rip into it! I haven’t read much John Layman work, but I will be reading this book going forward. Layman has a great voice for Batman, and the villains in this title, and I got the feeling that he’s cooking up something large for Detective. Something that will bring this book nearer to par with the work Snyder and Capullo are throwing down over in Batman. Add in some brilliant art by Fabok and DC’s got a winner in Detective Comics.

This is another one I did a full review on, a comic that easily earned a place on this Honor Roll. Simply put, the captain is back at the helm of his ship, and it’s good to have him home on Hellboy. Hellboy is at its absolute best when Mignola is writing and penciling the book, and this is proof of that. The art is crisp, the book is sharp, funny, and full of action. This is a great read for any Hellboy fans, and I think this is going to turn out to be a really interesting series.

Oh, what a web Slott weaves. The Internet outcry is hitting a fever pitch with this title, but I found it to be a really solid follow up to the startling end of #698. Many of the questions of “what? how?” were answered in this issue, and now the real challenge lies before our hero. Ramos’ art is fantastic, his style for Amazing Spider-Man is extremely easy on my eyes, and he and Slott really seem to work well as a creative battery. There are still a lot more questions for this comic than answers, but Slott certainly has my attention heading into the mammoth #700.