What a week in comics, I must say. This past Wednesday, February 20, 2013, featured the Big Two firing on all cylinders and some very strong books from across the industry. This list was a tough one to narrow down, to be frank, but here are the top 5 comics of my pile from this past Wednesday: 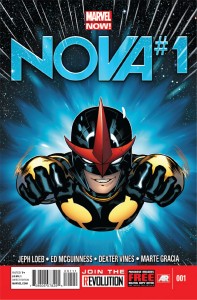 Marvel Cosmic is back, baby! Nova has long been known as the Human Rocket and that’s what this comic is in Marvel’s lineup. This Nova series focuses on Sam Alexander, a kid with few prospects in the little town of Carefree, AZ. His father is supremely down on his luck, a former Nova Corps member who has fallen from grace since his return to Earth, but what does that mean for young Sam? Jeph Loeb does a great job in this first issue of interspersing cosmic action with Sam’s small-town boredom and paints a really strong picture of who this kid is. Loeb does a great job of giving him a fighting spirit, but also some good judgment and a moral foundation to be a member of the Nova Corps. This is some of the strongest writing I’ve read from Loeb in a while, and I hope he can continue to keep the title as fresh as this first issue is. On art, longtime collaborator Ed McGuinness absolutely kills it. Loeb’s script is strong, McGuinness’ art makes it soar to the cosmos. If this is what we’re in store for in the visuals department, I am all in. Marvel Cosmic has never looked this good, and I’m not exaggerating. It is that good. Any Nova fans, be they long time, fringe, or even if you just thought the cover was cool, I highly recommend you pick up this book. 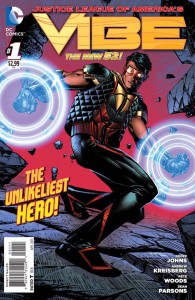 Where the hell did this come from? I have no history with the Vibe character, but from all accounts on the twitterverse this was primed to be nothing…but it is AWESOME. This is one of the best debut issues the New 52 has provided so far and it had me hooked from go. Johns and Kreisberg have primed Vibe to be a linchpin title for the entire DCU and I can see already that some big stuff is going to go down in this book. The dialogue is fresh and snappy, with Johns and Kreisberg working well together to make this character relevant and interesting. Pete Woods elevates the book to new heights with fantastic art throughout, eclipsing the art in Justice League of America in my opinion. This was DC’s brightest star this week for me by far, and that is saying something considering the strong Green Lantern books and JLA #1. Vibe is an absolute must-read for anybody who is following the Justice League/JLA family of titles closely! 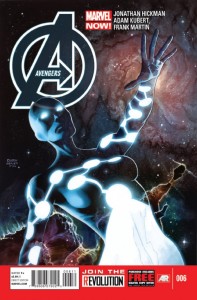 Pop! That is the sound of my mind exploding with the awesomeness that is this comic. Hickman & Kubert have been doing a great job with these new-member-focused single issues, but wow, did they ever knock #6 out of the park. Captain Universe is the subject of this issue, going through a therapy session with Shang-Chi, which in and of itself is an entertaining concept. Chi delves into what makes up this Captain Universe, who she is, and what she has been through. This comic has moments that are absolutely heartbreaking and Hickman does a fantastic job of fleshing this character out. Kubert’s art handles much of the emotional storytelling and he brings out the best work he has in 2013 with this issue. This comic made me a fan of this Captain Universe immediately, and the grand scope of what this story is alluding to is mind blowing. Hickman isn’t shying away from the grand scope in Avengers, and I love it. 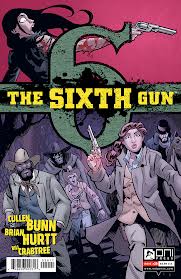 I did an advance review of this comic, but couldn’t help myself from revisiting this week because it is that damn good. This Sixth Gun series is a shining example of what independent comics can be, and how the quality can be second to none irrespective of the size of publisher. Bunn’s storytelling in this issue is on fire (as are many other things) and I love where he is taking these characters. They are weary, broken, and the toll of the guns is starting to weigh heavily on the group. This may be a bit spoiler-ish, but there are few characters in comics as awesome as “Mad Becky” and by Jove does she ever get mad in this comic. There are moments in here that are game changers for the series, and long time fans will certainly not be disappointed. Hurtt’s art stays solid as ever and he delivers some absolutely dynamic work in this issue that is given some great spark by colourist Bill Crabtree. Fantastic issue in one of the most solid series in comics. Also, an honourable mention shout-out to The Sixth Gun: Sons of the Gun #1 featuring Brian Churilla on art and focusing on the previous gun-wielders – this comic is an essential read for Sixth Gun fans. 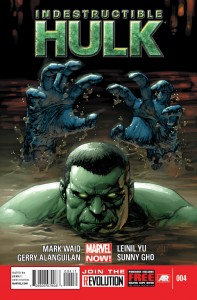 This is a great Hulk comic, right here. I am loving Waid’s take on Banner and his ‘predicament’ and the interesting dynamic it adds to a character that is often portrayed as very one dimensional. Banner is so much more than ‘smart guy who gets angry’ in this comic, and I love it for it. There is humour in this comic, a great deal of intelligence, and still more than enough smashing to get your ‘Hulk Smash’ fix. Waid is doing a great job of giving Hulk some credible threats in this series so far, as he has definitely found a worthy foe in Attuma and the creatures he has summoned from the deep. Yu’s pencils are electric and his layouts and splashes are jaw dropping and worthy of a character this huge and powerful. His Hulk is as powerful as he has ever looked, while Banner possesses a confidence that we’ve never seen before. This is a great collaboration between two creative forces and it is leading to magic in Indestructible Hulk.