The weekly Honor Roll is live, bringing you my five favourite reads from the past Wednesday, January 2, 2013. Marvel floored me with a couple books, a new (to me) DC title crept into my monthly reads and Dark Horse Comics grabbed themselves two spots in the coveted top five. 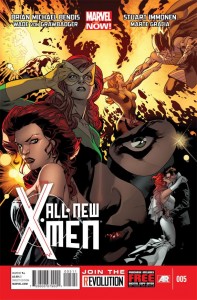 This was my book of the week, I absolutely loved it. I’m beginning to sound like a broken record about this book, but it is better than I could ever have expected it to be. Immonen’s art is at an all-time best and Bendis is writing a story filled with energy and originality. This is the best team-based book on the market today and arguably the best superhero book in stores. It is the first book in my read pile whenever it comes out, and I can’t wait to see where they take this next. The moments with Jean were flawless and full of heart, and Bendis’ handling of the “original five” is brilliant. This is what all superhero comics should aspire to be.

The book that gave All New X-Men a serious run for its money at top spot was New Avengers #1. Hickman is bringing the Illuminati back into the Marvel Universe in a big way and his characterization of the Black Panther is one of the best I’ve read in years. T’Challa is stoic, intelligent and proud, a ruler who can see the big picture and, let’s face it, nobody writes big picture quite like Hickman. This could be the epic, Marvel-Universe-spanning-book that brings it all together and I would love to see Hickman’s five year plan for this title. On art is Steve Epting, who is as strong as ever and brings a polish and tact to the issue that takes it to the next level. 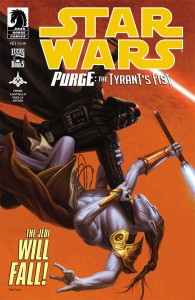 This is Dark Horse Comics doing Star Wars right. Freed tells a fantastic Vader story by using a strong narrative and some great supporting characters. There is some fantastic action and with this being a two-part story there is no excessive or drawn out sequences just to draw this story out into a three or four parter. Freed’s voice for the characters is great and Castiello and Chella team to provide really solid artwork for this story. A tad predictable, maybe, but a very enjoyable read nonetheless.

This comic is a lot of fun. I’m a new reader to JLD, drawn in by Lemire & Fawkes, so I can’t comment on whether or not there has been a shift in tone, but I really enjoyed this issue. Justice League with magic is a really interesting concept to me and I am really happy Frankenstein has found a place to go after the cancellation of the S.H.A.D.E. title. The characters are entertaining and dynamic and this storyline has the potential to be really interesting. I’m excited to see where this book is going to go, considering there is nothing on the market quite like it. Add in some fantastic art by Mikel Janin and you’ve got a winner on your hands, DC.

Mr. Mignola, you’ve got me. This was the first comic I read in 2013 and if its quality is any indicator of what the world of comics has in store for me this year, then I am a happy camper. This comic is eerie, intelligent, creepy, action-packed and wildly entertaining. Hellboy in Hell is a fantastic read for any horror fan, and I’d go so far as to say any comics fan in general. Mignola’s art is fantastic: this is his world and he is crafting it in his vision. His scripting is stronger than ever and this clever issue could be part of one of the best Hellboy series of all time.