Happy Friday and welcome to the weekly Honor Roll, a look at five of the best comics in my read pile this week. This week is a truly mixed bag, with something for everyone. We’ve got some repeat offenders on the list this week from Image & Dark Horse and a couple entries from the House of Ideas. Let me know your top five in the comments section! 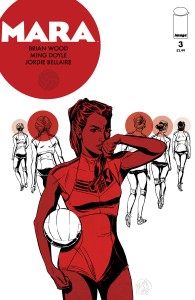 Am I starting to sound like a broken record with Mara hitting the Honor Roll for a third time? I don’t care! The book is that good! If you aren’t reading Mara by now, you need to bloody well start! Issue #3 takes this series to a whole other level, blowing a lot of subtly hinted plot points through the roof and changing the dynamic of the book completely. The powder keg Brian Wood has been pressurizing for 2 issues has blown wide open and this series has become even more interesting than it was before. Ming Doyle’s art is flawless and she pencils Mara as such a tightly wound coil that when she finally lets loose it is one hell of a visual. Jordie Bellaire’s colour work is fantastic, as per usual, and this is a must-read series. Bring on issue #4! 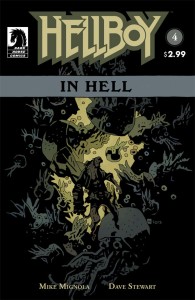 So Mara has been 3 for 3 on the Honor Roll, only to be outdone so far by Mike Mignola’s Hellboy In Hell. Appearing for the 4th time on this list in 4 months, I cannot reiterate enough just how well crafted this comic book is. This story is eerie, dark, somewhat scary, and the occult mystery of Hellboy is second to none. Hellboy is at its absolute best when drawn by Mignola and this issue is as strong in its storytelling (both writing and visuals) as when Hellboy stormed onto the scene years ago. Hellboy in Hell has been an epic mini-series filled with questions about the future of Hellboy, and issue #4 sheds a little light into the future of the character, who Mignola obviously has some serious plans for. This comic is an excellent example of what comics outside of capes can be and any horror/occult or BPRD/Hellboy fan must read this at some point. Mignola is one of the best storytellers in the industry and Hellboy in Hell is a magnificent read. 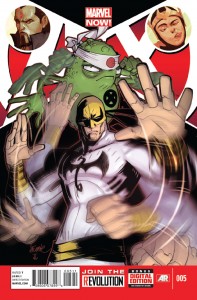 Most of these A+X team-ups haven’t really been my bag, but when I saw this cover, I had to read this comic. Doop slays me, no matter where or how he appears, and I am a huge Iron Fist fan. The possibility of gleaming some info on where Iron Fist is in Marvel NOW! was more than worth the price of admission for me so I took a shot….and I’m glad I did. Kathryn Immonen and David LaFuente have created a hilarious team up adventure with two characters that have chemistry to rival that of Fist & Cage. Iron Fist’s stoic nature is the perfect foil for Doop’s absolute chaos, and Immonen takes these two on a mini-adventure I will never forget. Add in some fantastic Kung Fu moves like the “Mary Lou Retton” and I’m sold on these two as a team-up for an ongoing. Absolutely brilliant. BUT, as is the nature of A+X, that isn’t all! I bought the book for the first story, but got the fantastic bonus of a brilliantly crafted second story focusing on Mister Sinister & Loki. These are two guys you DO NOT want to have in the same room, let alone on the same planet, and Gillen does a great job of teasing just how dangerous it could be if some of these Avengers and X-Men villains started co-mingling as the heroes are. This opens the gate for all kinds of madness and I heartily enjoyed both halves of this book. 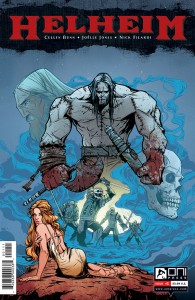 Let’s do a 180 as far as content is concerned and dive into a dark, brooding world of northern-viking-style violence with Helheim. Bunn pulls no punches with brutality in this comic, so if some gore isn’t your thing, this ain’t your book – but with the mayhem is an interesting story that is being cooked up. There are more questions than answers in this first issue, but they are questions I MUST have answers to. Who is this threat? Where are these creatures coming from? WHAT DOES THAT LAST PAGE MEAN?!?! As you can tell, this book has whipped me into a berserker frenzy and I must know more, as you will too upon reading. Joelle Jones compliments a solid story with fantastic art, and I know now why all who read it at ECCC were raving about her pencils. This is a book as visually gripping as anything on the shelves and you better get your hands on this quick: once it takes off issues will be hard to come by. 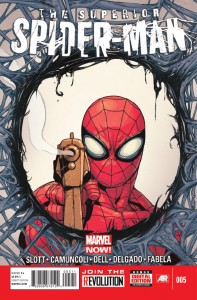 Dan Slott, you know how to keep me on my toes. If anyone was thinking Superior Spider-Man wouldn’t change the status quo of Spider-Man’s world all that much, this is the issue to make you eat crow. I will get a gripe out of the way right now: Amazing (for the most part) was always accessible to children and with the introduction of Massacre that is certainly not the case with Superior, but as an adult that does not diminish the story Slott is telling here. The stakes in the world of Superior Spider-Man are more adult – Otto is taking no prisoners and this issue reiterates just how this Superior Spider-Man is not what anyone expects. The life of not just Otto, but Peter, has changed forever and the curve balls are not likely to stop from Dan Slott. This is the most dynamic Spider-Man story I have read in a long time and I applaud Slott for taking Superior in directions Amazing could never go. Giuseppe Camuncoli’s art is strong throughout this issue, conveying a true sense of terror throughout much of the comic and making this comic ooze stress. The situation in this comic is tense and scary, and the art reflects it very well. Naysayers be damned, Superior is entertaining comics!