Welcome to the weekly Comicosity Honor Roll! The Honor Roll features five of the top releases from this past Wednesday, May 29, 2013, which featured the first issues of some promising books! 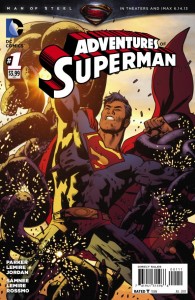 Adventures of Superman is a weekly, digital first comic starring the classic, heartfelt Superman we all know and love. This issue #1 print compiles the first 3 digitally told stories, each by different and extremely talented creative teams. Nearly every week, I am brought to tears; Adventures of Superman has simply the best Superman stories told in years. 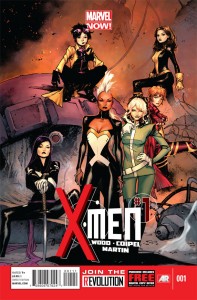 X-Men #1 has it all: action, compelling heroes, mystery, and a villain to be feared. Storm, Rogue, Kitty Pryde, Jubilee, Rachel Grey, and Psylocke are a strong, dynamic, and traditional X-Men team. Oh, and they’re an all-female team too, which is just pretty badass. This first issue gives me all the faith in the world that this will be an incredible series. 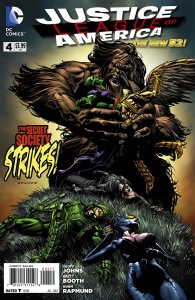 Justice League of America continues to bring the fun. Green Arrow joins the team and the first glimpse of his bro-mance with Hawkman is seen. Stargirl goes against Amanda Waller’s orders and refuses to stand on the sidelines. And in issue #4, as a relief to some, Catwoman finally zips up and proves that she can be a witty, strong hero. As an added bonus, the Martian Manhunter back up stories by Matt Kindt and Andres Guinaldo are nothing short of fantastic. In this issue, we learn about Martian Manhunter’s home-world culture and his struggle with survivor’s guilt.

“A single dream can spark a revolution.” The first line of this issue does not prepare you for the level of creepiness that you’re about to face. After having a dream, a business man travels through the desert on a crazed, spiritual quest. He unleashes Wick, the father of colors, who quite literally rains down death all around him. The Wake #1 would be on The Honor Roll based on Murphy’s art alone. His work is strong in Punk Rock Jesus, but by adding color (by Matt Hollingsworth), I am blown away. Then, of course, there’s Snyder’s writing. His story-telling abilities are nearly unmatched in comics today. This creative team brings their A game in this Alaskan, underwater, mysterious and horror-filled debut.