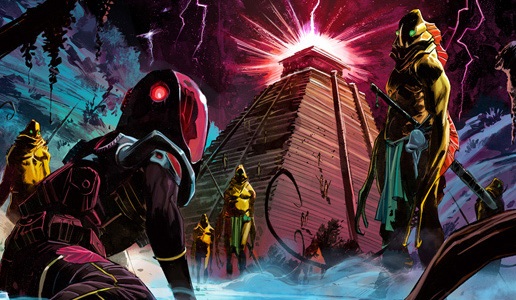 The Turkey has been turked and the stuffing stuffed and all the comics have been read and there were so many! So many great ones to share with you this week, so many spoilers. Enjoy!

This week, I gotta pick Aquaman #25, and I had a bit more than normal to pick from. But, from all of the action scenes to the heroes blasting their powers, it all came down to the quietness that happens between Volko and the King of Atlantis, well, Arthur. You can never steer wrong with Paul Pelletier guiding the pencils, but the inks by Sean Parsons stands out in this panel. It’s a beautiful piece and the balance between positive and negative space works perfectly in an artistic sense. 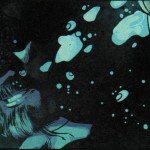 Who I am: I’m Brian Du Pont, indy creator of Pecos Bill comics and owner of Colring Book Press. When I’m not making comics, I’m teaching young children how to become artists, while maintaining a home of two young Lantern sons. Follow me at Twitter @colringbk

and visit my site, www.colringbookpress.com and buy some comics.

As you’ve probably already guessed, my Honor Roll pic involves Spider-Man. I know, a true shocker.  However, as I was reading this week’s fabulous Superior Spider-Man #22, this panel stood out to me more than the awesome action scenes.  I just couldn’t help but laugh when I read it. It epitomizes Otto as Peter to a tee!  I hope they find a way to keep this version of Spidey going, even upon the inevitable return of Peter. 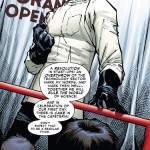 Who hasn’t wanted to see Thor smash Mjolnir into Thanos’s head! A great conclusion to a great event. Infinity had it all! Thanks Hickman and Cheung for this thunderous panel! 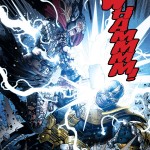 For the second month in a row, Kelly Sue DeConnick and Emma Rios have captured my heart. I’ve never really cared for Spaghetti Westerns but this mash-up of macabre, supernatural fantasy with a Western twist works amazingly well. Everything about this book just works! 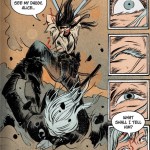 About me: Just another carbon-based life-form of the female persuasion trying to find my place in the world. This much I do know: I am a nerd and I’m proud of it. It’s been that way as long as I can remember. I love comics, archery, science, and beer (both drinking and making it). Follow me on Twitter @LeidamarieTL for more nerdy awesomeness.

This series was highly anticipated, and the long wait seems to have paid off. This first issue was astonishing regarding both concept and writing, as well as the phenomenal artwork. The colors in particular are something from another dimension (how fitting?). This scene was such a wild revelation following the previous panels.

Expectations were high for the first issue of Black Science and it did NOT disappoint. Eel riding fish warriors who are enslaved by gluttonous frog people in forest temples that happen to be on giant swimming tortoises…..how can you not find enjoyment that?

THIS is the book I’ve been waiting for. A killer creative team, crafting an homage to Frazetta while continuing in the honor of Fear Agent. This splash sums up everything I loved/anticipated about this book: grand scope, gorgeous art, the beginning of a true epic, plus a nod to what is (to me at least) the greatest creative team currently assembled. I will read anything Remender, Scalera, or White work on, but put them all together and you have not just my book of the week, but my book of the year! 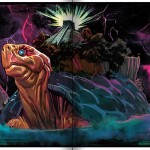 About Me: Joey is a graduate research scientist working in the areas of neuroscience & biophysics. He is also a reviewer and editor at All-Comic.com, and lives for all things nerd; comic books, roleplaying games, science fiction, fantasy, horror, etc. Follow him on twitter @summoning_ifrit

About Me: Ian Stephen is a human just like you (don’t question it) who loves comics and music. When I’m not making food for the hungry over-fed American population you can find me harassing musicians and comic-creators alike on Twitter @ianthevillain where i tend to spew hot garbage for the internet masses to ignore.

Beautiful world building with frankly Frazetta-esque creatures! A “best use of the color purple” Eisner could be awarded for the first page alone. I’m definitely looking forward to jumping back into the world of Black Science.

Black Science is my book of the week. Hell I know I can’t be the only one here that loves beautiful, fast, smart comic books. And that exactly what Rick Remender, Matteo Scalera, and Dean White delivers with issue number one of Black Science. I’m buckling up for what appears to be a helluva ride. 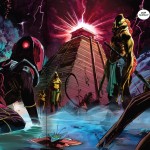 About me: Will Pheesh wants you to be happy and well, and not just because it’s his profession. He can be found on Twitter @WillPheesh.

About Me: Im Tommy. I love comics. Enjoy every sandwhich. Follow me @VictorVonZoom

Saga #16 is chock-full of some amazing Lying Cat moments and, to be honest, it was difficult to narrow it down to just one. However, I’ve deemed this panel worthy of the caption, “Not sure if lying?” and that’s a big reason why it has earned this week’s selection for the Honor Roll! 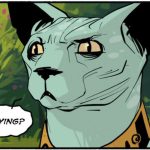 About Me: Corey Fryia is a independent comic book creator and former Associate Editor at Readcomicbooks.net. He loves independent comics and has a very manly beard (perhaps not as manly as Ollie’s Zero Year beard.) You can follow him (and his manly beard) on Twitter @coreyfryia

The Mignolaverse has a highly exceptional roster of artists to bring to life the fever brained ideas of Mike himself.  Sledgehammer will hopefully show Laurence Campbell’s work to a larger audience.  His art is detailed, impressive and completely different than what you expect in a Hellboy-related comic.  His dark style is perfect for this sci-fi noir. 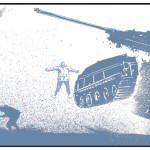 I started this book for its similarities to the TV show Whale Wars. It’s taken a while and we’re finally there. Callum just took the latest attack more personal. 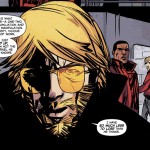 About Me: Full time cable guy, Star Wars geek and soccer fanatic. The twitter addict can be found @loafandjug tweeting about insane customers, what he’s reading or being a soccer hooligan online.

Negan at his finest. 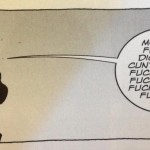 About Me: Roderick is an avid comic reader and collector, with a particular fondness for funny books and nerd nostalgia from the “Dark Ages of Comics” (also known as the late 80’s and 90’s). When he’s not diving in $1 long boxes trying to recapture his youth or working out his biceps from lifting his massive pull list every Wednesday at his comic shop, he can be found on Twitter @roderickruth.

Hallucinogens are bad, m’kay. I’m more inclined toward dysfunction and self-loathing, so The Will is The Hero, in my mind… and he seems to be in dire straits, indeed. Mr. Vaughn & Ms. Staples continue to string us along.. more accurately, tugging on ALL of our emotional strings, I ought to say. And I Love every minute of it! 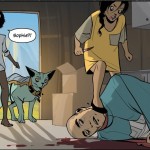 About Me: Corey Fryia is a independent comic book creator and former Associate Editor at Readcomicbooks.net. He loves creator-owned comics and has a very manly beard. You can follow him (and his manly beard) on Twitter @coreyfryia

Nothing is forever. What an event. Loved it. 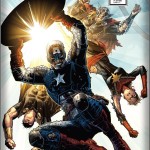