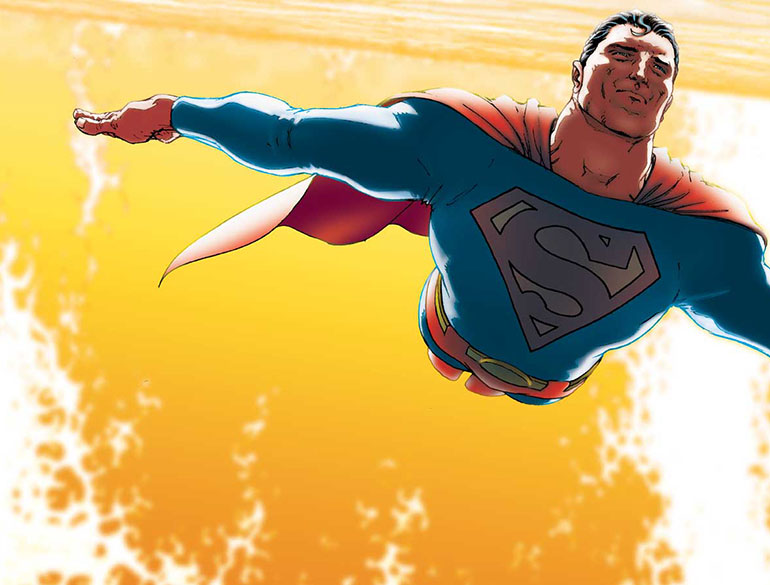 I am a English instructor who regularly works with a variety of young adults. My goal is to help them become better writers, a process that, I believe, will help them to become “better” thinkers than when they first started class with me.

Or, if I am to hold myself up to the same level of precision that I ask my own students to aspire to, I should say I want them to become individuals with minds that are more receptive of information and more willing to investigate. I believe that while it is often hard to help a student “writer better” and to expect results within 16 weeks, asking students to stop, think, and start asking questions allows for some great results almost immediately.

Grant Morrison, funny enough, has proven to be a fantastic way to get my students talking about what troubles them, what their concerns in life are, and to think about how writing can and does transform us. 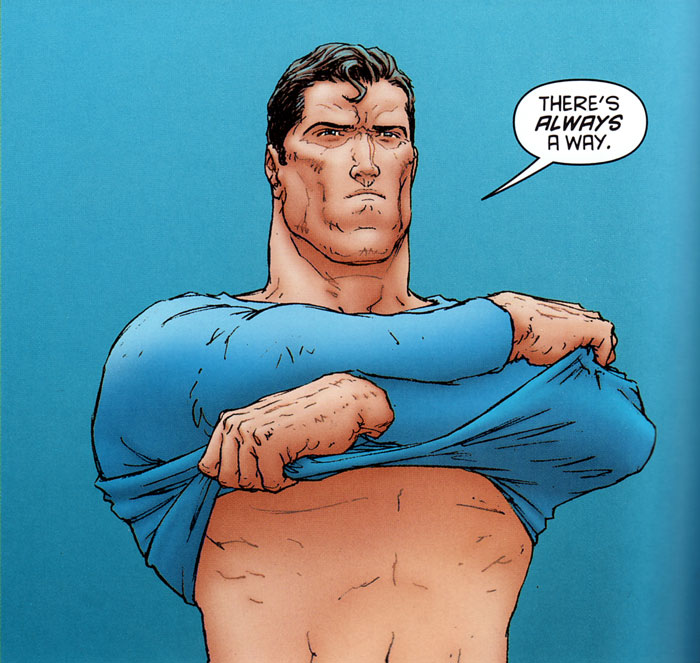 I have noticed that many students fall into at least three kinds of “thought” patterns. There are those who have guarded thoughts, i.e. their ideas, and their writing, are intensely personal. These students are not keen on sharing, with myself or with others, and so it takes a lot of attention and concern to make them feel that their writing as always good enough to share and build on.

There are those who have broadcasted thoughts, i.e. these are the students who transmit everything they think with loud, determined passion. Their writing and their hearts are something like an air-raid siren, alerting all in the vicinity that they have ideas, they want to share them, and sometimes they can be bombastic (which is great!)

Thirdly, there are students with protean thoughts, i.e. much of what they contribute in class, through voice and on paper, is open to suggestion. These students have their own ideas, to be sure, but they are deeply concerned with wanting to know where and how their ideas can and should change. There are obviously other kinds of thought, but these are the three “kinds” I tend to encounter the most often. 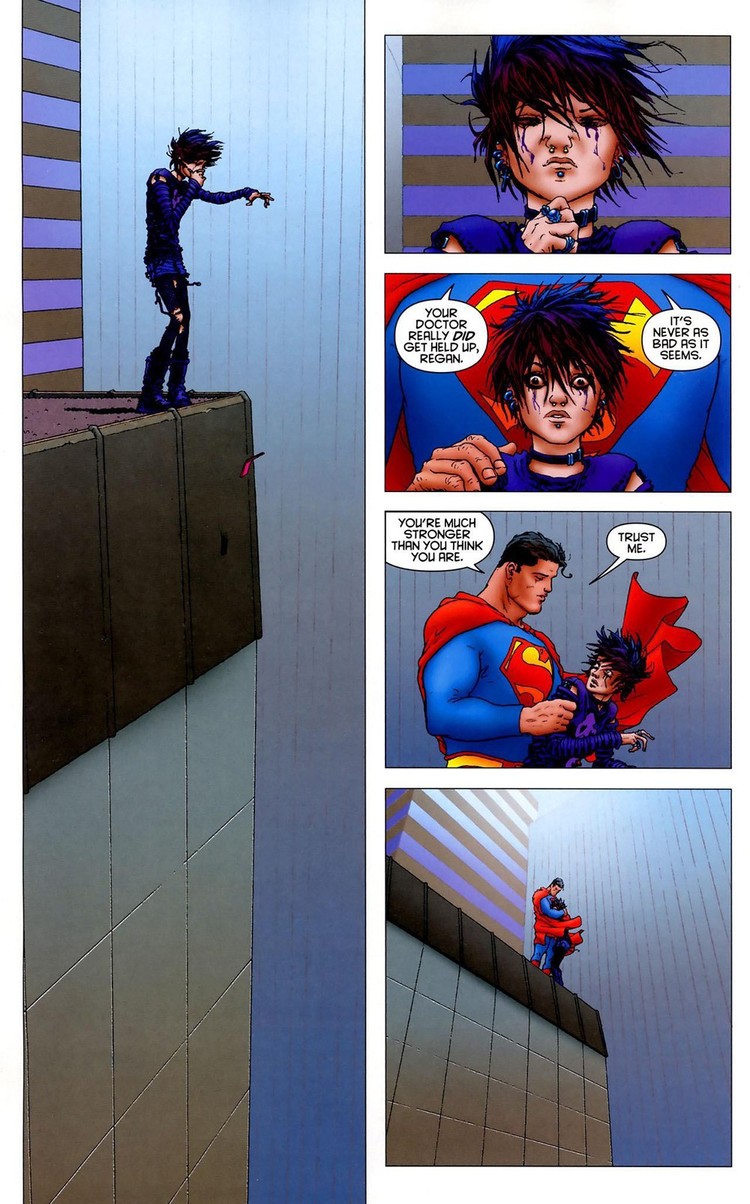 Is it common that we think of comics as having a kind of “pattern?” The excellent King in Black column by Matt Santori was a piece that moved me, not only because of its insight as to how many different comics connected together, but also because it managed to get at what the “thought” style of King was and is across many works.

I think, personally, I’d love to write a piece on Grant Morrison in a similar vein, but before I even start to work on that, let me share with you one example of how a class I worked with encountered Superman.

As it tends to happen, I sometimes arrive earlier than my students by a good number of minutes. Some students at one point were similarly early so we got to talking about comics and popular culture.

STUDENT: I think writing can’t really change much. I mean, what good will my ability to write this paper do to help me find love, be a good person, or matter at all.

MYSELF: You’re asking something that research writing might not always help with, but certainly writing can help you do all those things if you let it.

STUDENT: I don’t buy it.

MYSELF: I am dead serious when I say this, but read All-Star Superman.

MYSELF: You should still read it if you can. I promise you that, on some level, you’ll wind up feeling something and I want to know what it is. Even if it is contempt for an awful book that you think is boring, ‘cause maybe that is what you think Superman is, let me know. 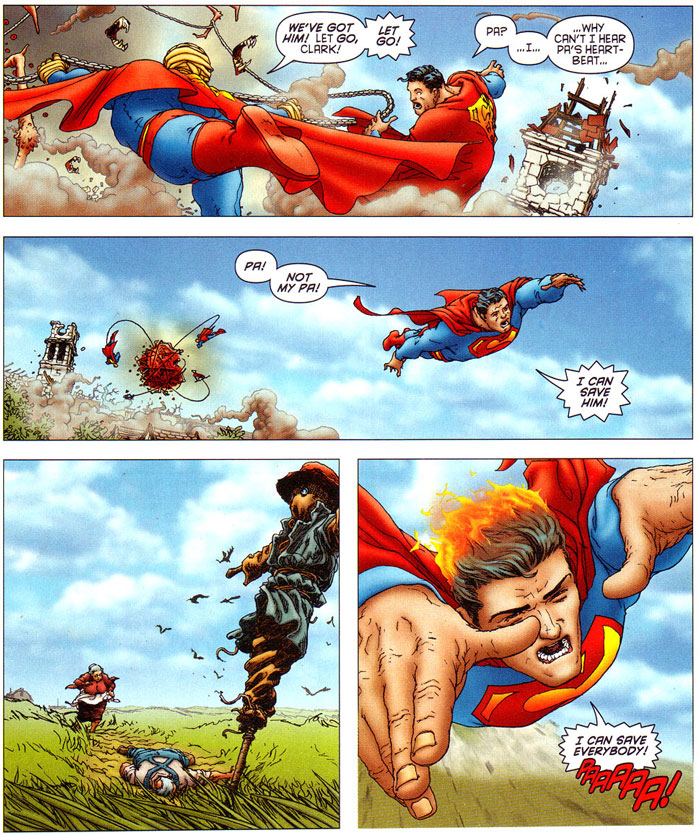 I did not hear from that student on the Superman subject until today, hence why I am writing this. I ran into the student outside on the way to drop off some flyers for a booth near our library. While we exchanged the common pleasantries, something awesome occurred.

STUDENT: I also checked out that Superman book. I never thought anybody could make a Superman comic that would make me cry.

MYSELF: What part hit you so hard, I mean, I think the whole book is gold, but was it something specific or …?

STUDENT: I had friends who thought about ending their lives, so the idea of Superman talking to that girl? It wasn’t what I was used to seeing in hero comics.

MYSELF: Morrison genuinely, as dumb as this may sound, wanted to create a Superman that was a better idea than all the violence and destruction we tend to use to solve our shitty human problems. Remember how you wondered if writing could do all these other things and make you a better person? Morrison wrote that Superman comic to try and get something out of life. If he couldn’t see or find that perfect hero, he wrote about it, and shared it, and now you’ve read it and you’re a better and stronger person. 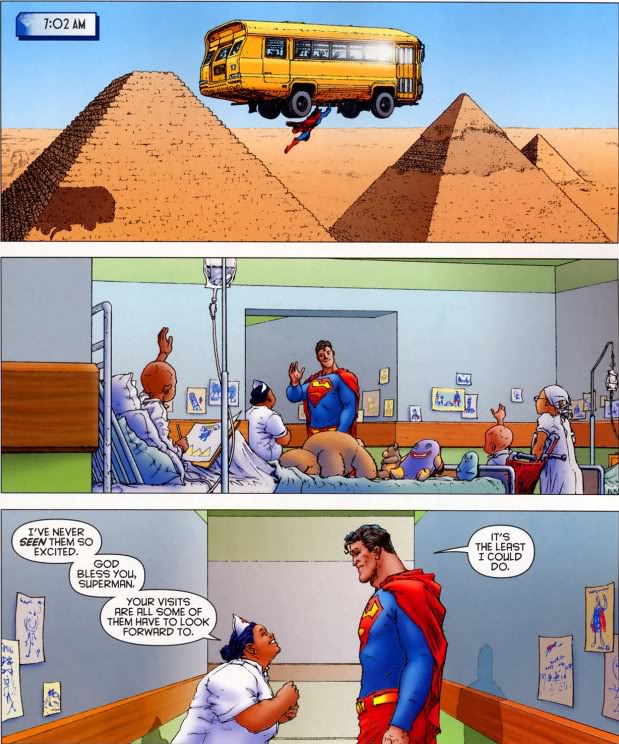 STUDENT: How am I stronger?

MYSELF: You cared about your friends, the ones who had gone through those difficult times and had their hearts go into some deep places, right? You suddenly got reminded of how much they meant to you and suddenly they mattered. I mean, they mattered to you more clearly as you read Superman than they did before you opened the book, right?

STUDENT: Yea, I think so.

MYSELF: Right now, man, channel that, use that. Do something kind for another person. Call your mom, or your siblings, spent time with your pets and connect with people. I don’t know if you ever write anything creatively, but give it a try. Write letters to people, make an effort. Be a Superman for somebody, or something, just … BE! Love and care actively, not reactively.

While I need to admit that I am trained for Creative Writing, but I have not taught it, my goal was always to help that student understand that writing, even (heck, especially) comic writing can reach people and it can matter. I think of Morrison’s comic thought as being “broadcast” level, he has a clear message, one he has seemingly spoken about quite frequently over the years.

To Morrison, Superman is the best idea we can possibly aspire to. More than bullets or guns, Superman represents something within all of us that we frequently repress and stifle, but it is a force within our natures that can genuinely help and touch people. 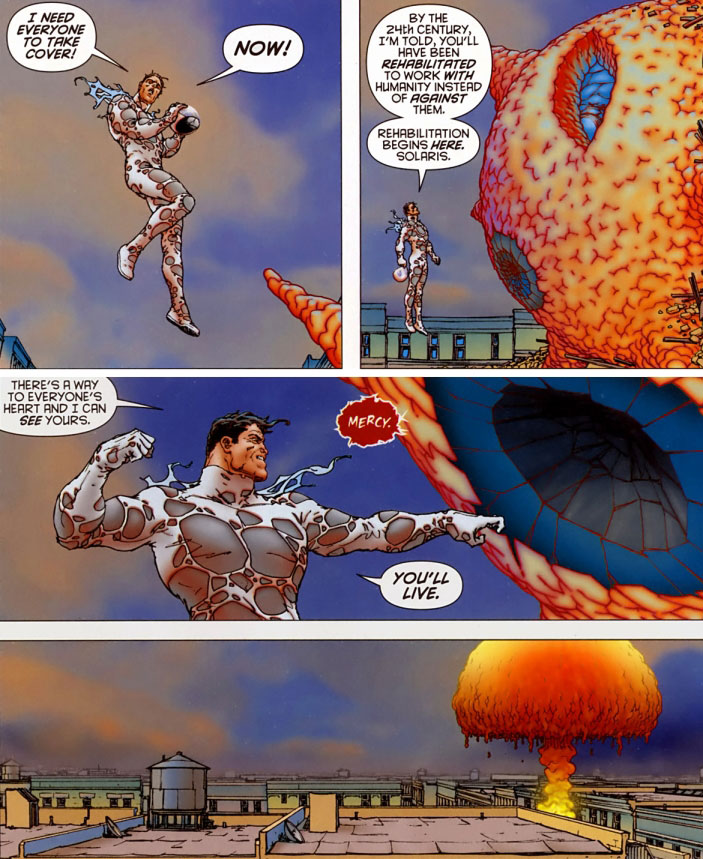 Do I think everyone is capable of just diving into their inner pool of Superman? No, not exactly. I use my passion for teaching research to, where possible and correct, guide students into coming to terms with the fact that they need to flex their empathy and criticism muscles.

At heart, everyone can write something. What people tend to get less training on is how to assess rhetoric and how to accept evidence versus opinion. I think that having empathy is hard when you don’t fully understand why somebody says or does something, but it is often not the easiest thing in the world to just stop and “get into somebody else’s head” on an issue.

The closest we can really get is either by writing or by talking. This is why I continue to love All-Star Superman, because so much of how Clark deals with issues is as much rooted in conversation as it is fists. Much of the heart of Morrison’s comics comes from the fact that he is broadcasting a loud and clear signal about love and understanding. That might sound really hippy-ish, but it works.

All-Star Superman was a work that was reflective for Morrison, it showed much of who he had become and, after the death of his father, what he wanted to continue being. In his semi-autobiographical book, Supergods, Morrison details the impact of All-Star Superman on his life and how different it was for him to write that work as opposed to Final Crisis and The Filth. 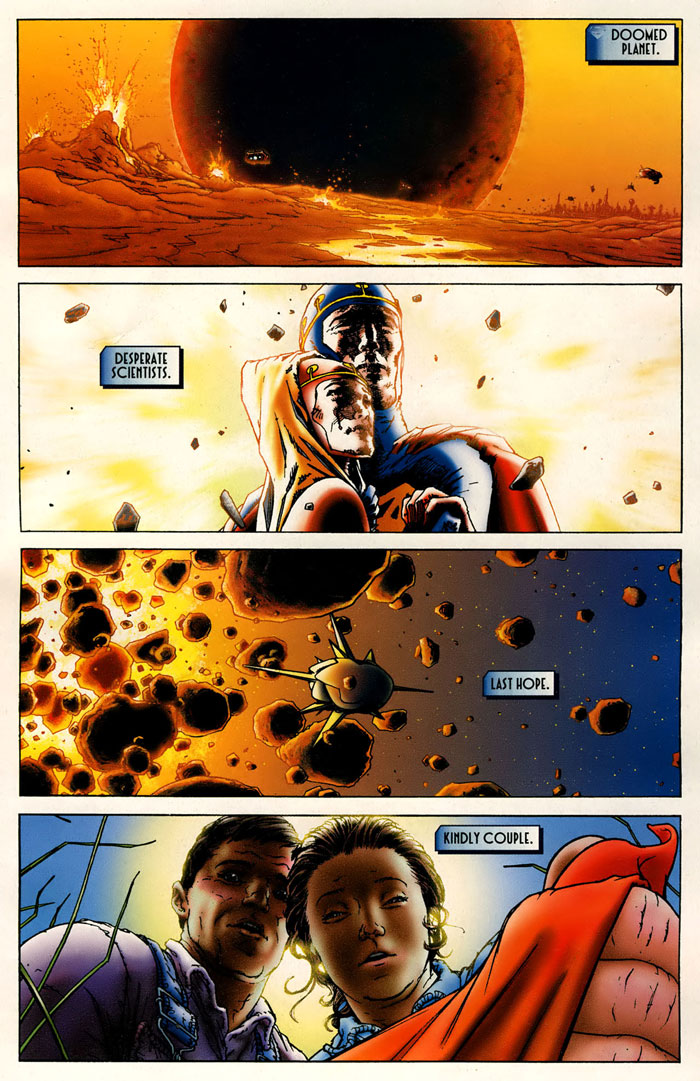 I have talked with my students about how some authors such as Morrison comics as rhetorical vehicles for “bigger ideas,” for thoughts that could be just as easily transmitted through an essay or prose text, but whose impact is magnified through a combination of visuals and prose together. While I have tended to use All-Star Superman briefly, mainly to get at conversations about Pathos, the work has been something that has at least wound up being important to one student. I hope by sharing that one student’s story, it thus impacts you.

When you next stop reading a particular comic, stop and think about it. Does the author present their ideas candidly, say, though only a single character or plot? Do you even know what ideas the author has and if they are being shared with you? Does the author use the comic as a vehicle to loudly broadcast this or her thoughts right in your face? Does the author work more nebulously, challenging common beliefs while not exactly pitching a flag on any one side of a topic? 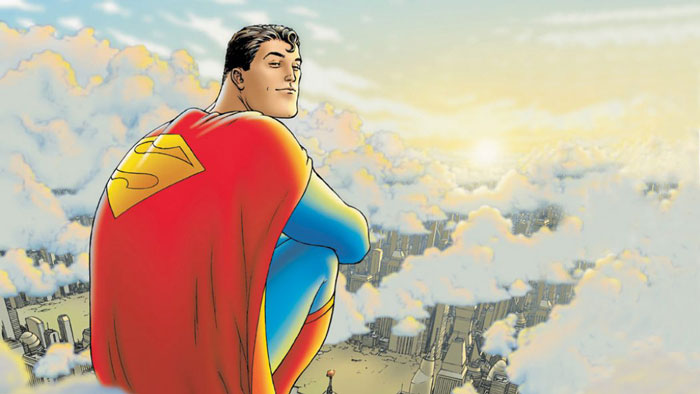 Then, after you think about all this? Try writing down what the comic inspires in you, if it inspired anything at all. I believe somewhere is a comic that moves us to be better, or to at least consider how we could be better. Who knows, maybe after reading all this one comic will JUMP into your mind and you’ll read it. Maybe then, afterwards, you’ll do something for a person you never would have done otherwise today.