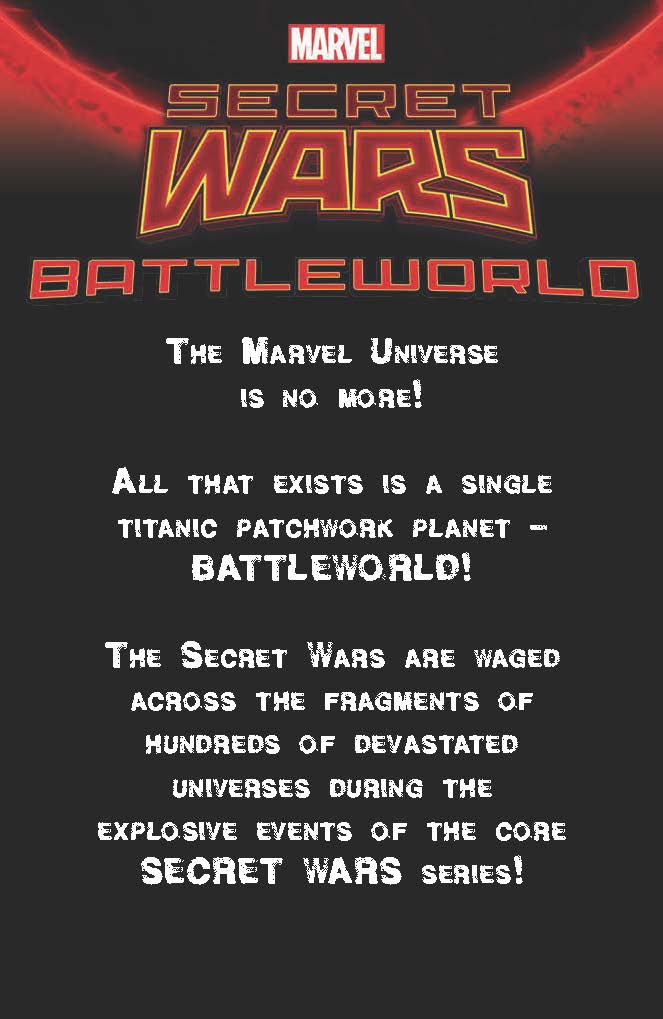 New York, NY—January 22, 2015— The Marvel Universe has been destroyed! One by one, each and every universe across the cosmos has been eliminated. All that exists is a new, patchwork planet made up of the remains of decimated universes.  Today, Marvel is proud to announce BATTLEWORLD, which joins LAST DAYS as two of the three unique umbrella brands of titles launching during Secret Wars!

“If you want the full story of what’s happening across the surface of this new planet,  BATTLEWORLD branded titles are for you,” says Marvel Editor-in-Chief Axel Alonso. “Who polices Battleworld? How do the various domains interact? What happens when those domains go to war?  What strange, never-before-seen creatures inhabit this world? What familiar faces will make appearances? Fans who want to fully understand how each sector interacts with the others can’t miss out on these books!”

Titles carrying the BATTLEWORLD banner will focus on the interworking and interaction of all the domains now fused together throughout the one and only remaining planet! The Secret Wars are waged as the last remaining fragments of dead universes fight for survival. Who rules these domains? Who comes out on top? Who lives? Who dies?

“The inner machinations of Secret Wars happen here,” says Marvel SVP Sales & Marketing David Gabriel. “BATTLEWORLD branded titles will be clearly marked through the Marvel Previews solicits as well as with well distinguished cover trade dress, this way both retailers and fans will know what they’re getting. Think of these as the new core monthly titles. “

What secrets are about to be revealed? Find out this may as Secret Wars enters BATTLEWORLD!