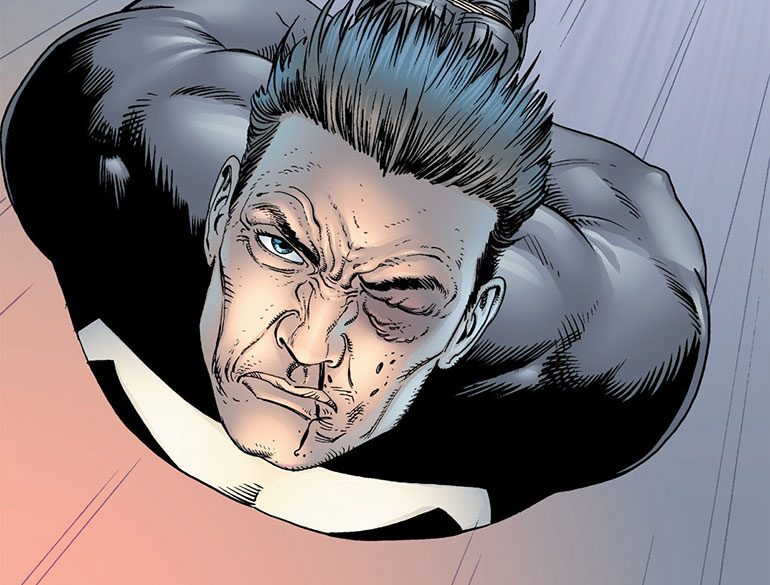 Pop culture has become dominated by the world of super-heroes.

Gone are the wide-eyed gazes from 2008 as Robert Downey Jr. and Jon Favreau managed to craft an incredible, engrossing film about a comic book character. Iron Man’s success could not have been predicted. The success of Joss Whedon’s Avengers would offer audiences another pleasant surprise in 2012, as it proved that an entourage of super-hero characters could not only be represented on screen simultaneously, but that the film itself could be handled well.

This past year, three of the top five highest grossing domestic films were in the superhero genre. Wonder Woman, directed by Patty Jenkins and starring the phenomenal Gal Gadot, claimed 11 awards on its own and held another 24 nominations.

Characters and stories born in comic books have never been so present in the mainstream media. Thus, the question has become more frequent than ever: who’s your favorite superhero? With the medium’s exposure at an all-time high, everyone has an answer.

Superman, the outsider seeking acceptance while steering society towards greatness; Spider-Man, the young man trying to juggle the hardships of adult life with the responsibility of his gifts; superheroes are so varied and so very human in their struggles that relating to these characters becomes easy.

Who then, is my favorite? Who do I relate to the most? The answer is typically met with scrutiny. 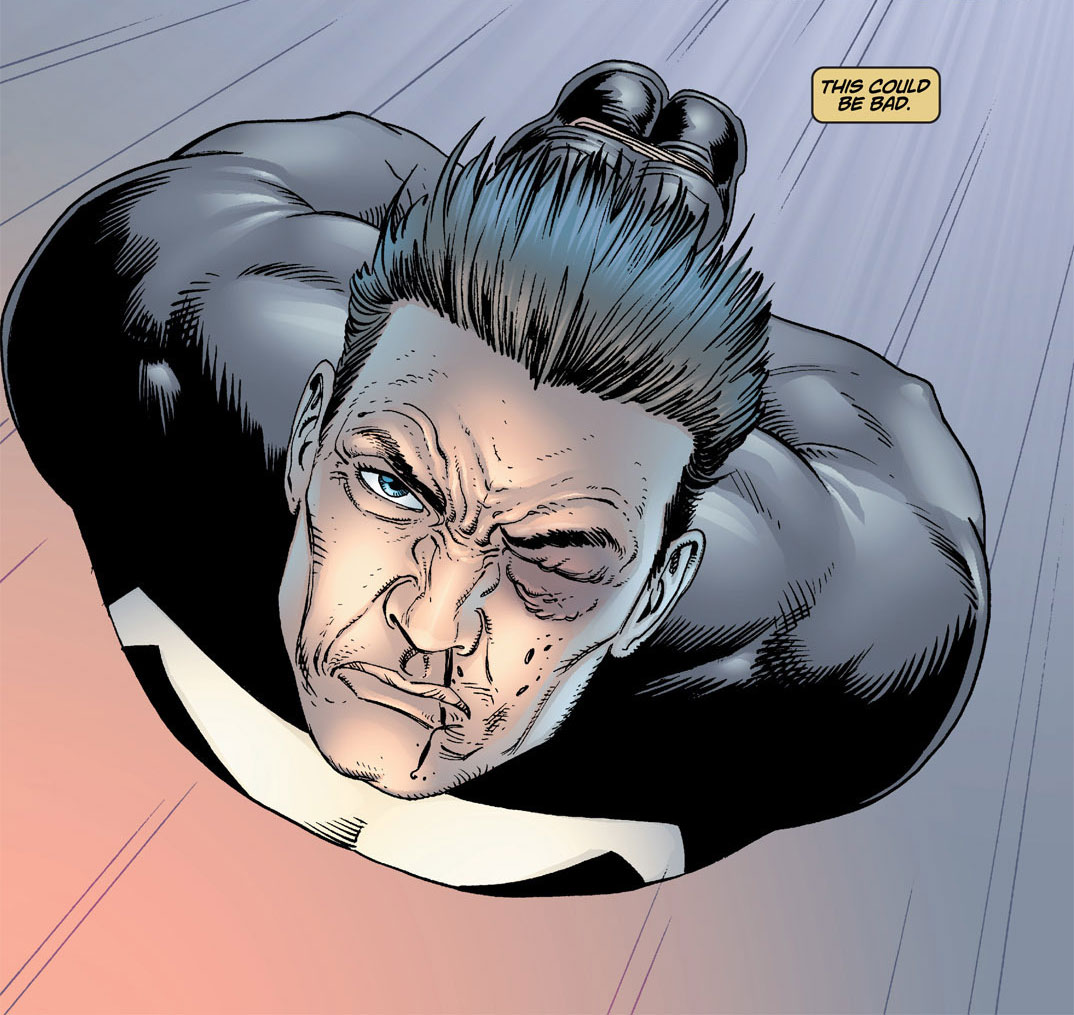 Opposition would insist that the Punisher cannot even be included in the discussion. He has no specified or distinctly inhuman powers. He doesn’t sport a colorful wardrobe. He’s a murderer and arguably a villain at times.

These are facts and even identifiable traits of the character. There is no comic book with his trademark skull on the cover that doesn’t see someone die within. Frank Castle doesn’t wear yellow and blue or brandish some symbol of hope. He won’t fly into battle without the aid of some vehicle and he can’t withstand a punch from Superman.

Which of those features disqualify him, though? Batman doesn’t have super-powers. Black Panther, Thor, Wonder Woman: they’ve all killed for what they felt was justice. Even Deadpool, the unkillable and psychotic mass murderer, would be an acceptable answer. Unless the Punisher is excluded simply because he wears a skull on his chest, he cannot be separated from the argument.

The Punisher is a super-hero. 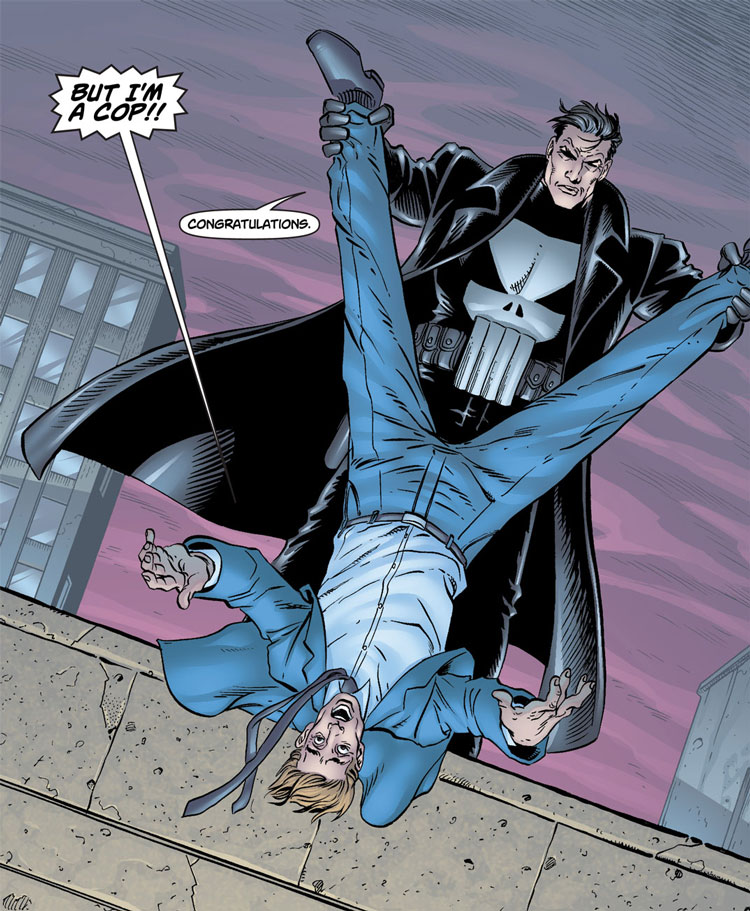 New questions are born with this realization. Why choose the Punisher, the man with the guns and the penchant for violence? What is there for a reader or a viewer to relate to in a murderer?

It needs to be understood first and foremost that the dark, aggressive tales which put the Punisher at their center are designed to address themes that carry much more weight than the typical smile-and-cape hero can rightfully represent. Tragedy, abuse, human rights, mental illness… the subject matter isn’t always handled best by predominantly featuring aliens or post-humans with powers that distinguish them from the norms of society.

Sometimes the best way to connect with a reader on these matters is with a touch of the most uncomfortable realism, not with the superfluous or by treading around the darkest parts of the subject.

Frank Castle served for his country honorably. He found a home in the warfare like many soldiers do, among brothers and between the bursts of gunfire. He returned to New York, to his wife and children, scared that he had lost the part of himself that he would need to live happily in civilian life.

Instead of being given the opportunity to find that missing part and to live his life as a father and as a husband, his family was murdered. The reasons vary from chance to sabotage depending on the depiction of the character, but the act and the consequences remain.

The Punisher was born that day and dedicated his remaining existence to a war on the types of people which destroy families like Castle’s. That war is unending. Crime can’t be stopped. But it’s a purpose found amidst pain and that’s more than most could ever hope to find.

It was more than I ever found. 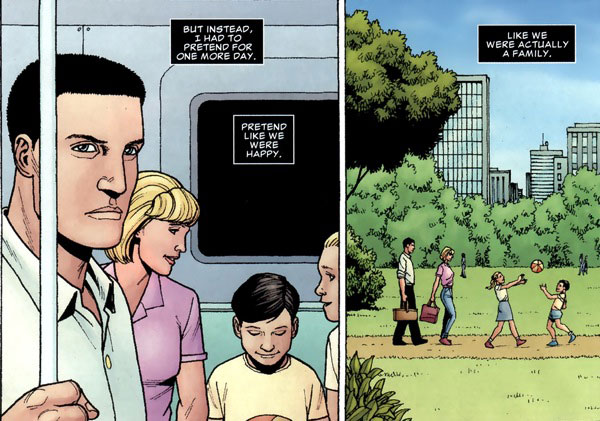 I was raised in a rough environment, one that I wouldn’t wish upon anybody. It changed me, not necessarily for the better, and I watched it change my siblings very much for the worse. My father was an active criminal and an abusive white supremacist, the details of which I’ll spare you. My mother meanwhile was desperate to keep our family together in a way that hers had never been. I expect that she thought being together, even if it meant us all being in harm’s way, was a healthier option than the abandonment we might feel in a separated family.

I don’t agree with that decision, but I do understand why she made it. In my adulthood, I have forgiven her and my father equally. While their decisions were deplorable, much of it was brought about by their upbringing and not necessarily by their nature.

My current understanding, unfortunately, did not save me from hate as a young man.

I had few friends. I fought a lot and got into serious trouble with the law once. I couldn’t form the necessary emotional connections to establish a relationship with real people. I had been groomed to see wickedness everywhere and I expected it. I lived my young life hurt, afraid, and angry. 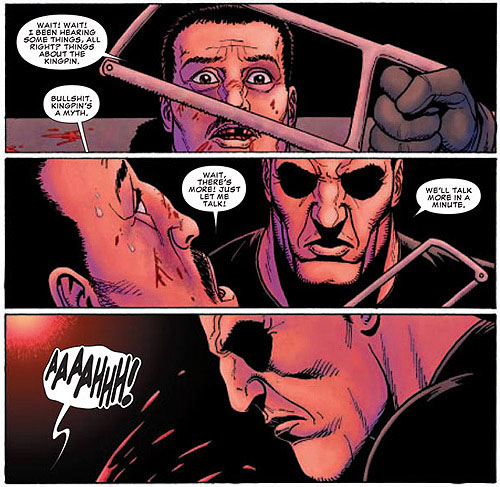 Until I became an adult, I escaped my world exclusively through fiction. Novels, comic books, movies, video games; I reached for the most deplorable narratives, horror stories and criminal biographies, because I needed to keep my perspective. I needed to know that as bad as things were for me, somehow it could always be worse.

I tried to use it to keep me humble and thankful for the few graces that I had. It worked at times but mostly I stumbled. It seemed that in my life things were destined to always travel downhill. I would hit what I thought was bottom, what had be the bottom, but the ground would break beneath me and I’d be right back in a freefall.

Anxiety, depression, insomnia, PTSD; I was accustomed to it all by the time I entered my teens. I do not remember what it was like to not be depressed. I lost that too early. To this day, I still feel my body react to the slightest inconvenience with grotesque anger because that was what I once had to do to survive.

In the scope of it all, I felt my hope was slipping away. There were no heroes in the universe that I lived in. People in situations like mine, people exposed to so much darkness, didn’t recover from it. They became it and they contributed to the cycle, like my father had before me. I resigned myself to this fate because I saw nothing, no works of art or real-life success stories that told me someone could turn the pain into purpose. 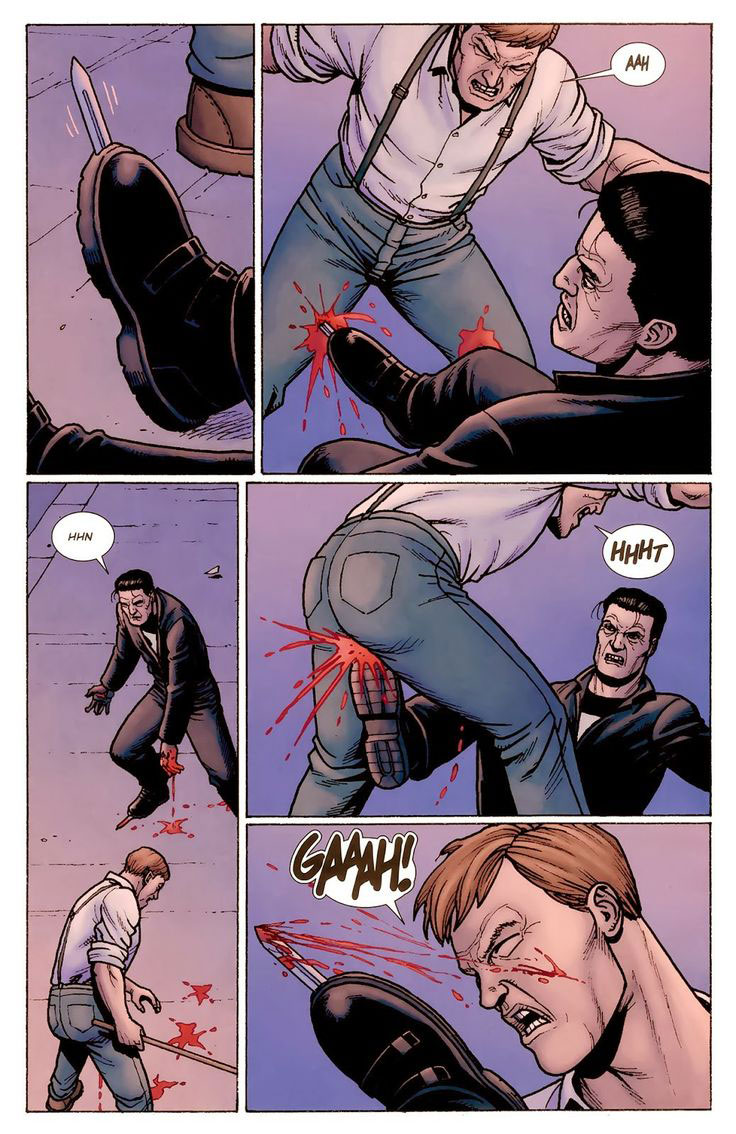 I started reading Punisher comics when I was twelve. I didn’t have access to a comic book store at the time and even if we had the opportunity my family wouldn’t have been able to afford the cost of an issue. I found my comics online. This was at a period when the internet was infantile and difficult to navigate, especially for a kid whose greatest piece of technology prior to that was the controller of a Playstation 2.

As expected, my acquisition of comics was slow. It took me days, weeks, sometimes months to find the issues or arcs that I was looking for. It didn’t take Frank Castle long to climb my internal hierarchy of comic book heroes, but he didn’t hit the top until years later when I got my hands on the entirety of Punisher MAX.

I will never say that an artist or creator ‘saved my life,’ it feels pretentious, but I will readily admit that Garth Ennis and Steve Dillon changed mine. I was given a world that didn’t shy away from the monstrosities, and it didn’t rely on metaphors to tackle nightmarish subjects that I had been exposed to first-hand. It was poetic in its brutality.

Things were glamorized of course, and the violence was exaggerated, but beneath that were characters that I could see existing in the world as I knew it. There were drug addicts, murderers, traffickers, rapists, there were children dying and women being abused; as much as I hate to acknowledge it now, these were identities that I could attach to the real world. These were faces that I had seen and that I had feared. They were the nightmares in the darkness that surrounded me, the influences that I had thought could only lead me down a similar path.

And then among them was Frank Castle. He had lost everything. He hurt, and he hated. He dreamed of a family and of a happiness that he was robbed of, and he woke from those dreams back into a broken world. But despite all of that, despite the glaring weaknesses that I could see in his character, I also saw his mission.

It was ridiculous. Impossible. His actions wouldn’t bring his loved ones back and they wouldn’t fix any of the world’s problems. He couldn’t possibly win his war. The alternative though, was letting his misery end him. Frank Castle’s choice was to be a victim of the violence or to rise above it and become something more. He made himself a purpose and he became that something, the Punisher.

I wanted a purpose too. The more I read, as different writers approached the character in different ways and showed all of these things that a broken man could become, the more I realized that I could become something too. It sounds ludicrous, to be inspired by a gunman with a skull on his chest, but if it wasn’t for the Punisher, I would have resigned myself to my loss. 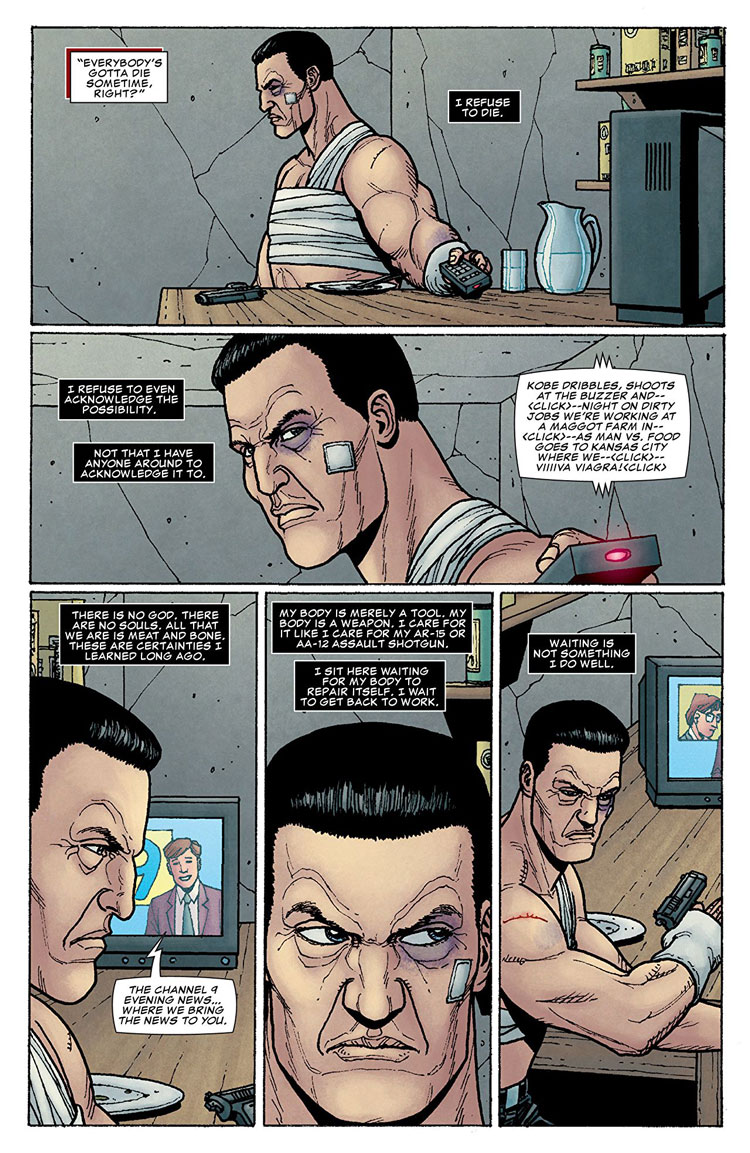 I started writing around the same time that I submerged myself in these stories. I realized that I wanted to do for people what these writers had done for me, even if my case was a unique one. I wanted to create something that could help that one person. My purpose was born.

Through the anxiety, the depression, the nightmares, the trauma… I wanted to be a writer.

I have a son and a wonderful girlfriend, and through each of them a brighter future than twelve-year-old me could have possibly imagined. I see Frank as a father, a husband, and as a man who lost a part of his life but turned that loss into great action. I lost a lot of my life too. I’m still finding my greatness, but I’m only able to search for it because of my superhero.

I’d take the power to push beyond my pain over flight or strength any day.