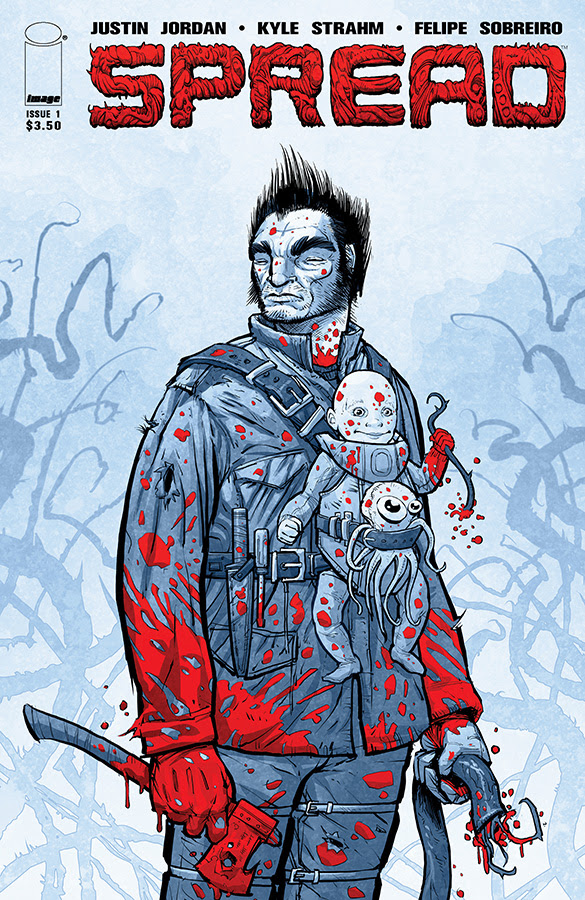 The second issue of Justin Jordan (DEAD BODY ROAD, the Luther Strode series) and Kyle Strahm’s (HACK/SLASH, HAUNT) SPREAD has sold out immediately at the distributor level and will head into a second printing.

The series continues to grow in popularity, as SPREAD #1 has sold out once again and will be sent into its third printing. Both issues have sold out completely as readers discover the infectious story that has been compared to John Carpenter’s The Thing. The scheduled reprintings will arrive on 9/10 to meet customer demand.

Praise for SPREAD:
“A very good case for creepiest apocalypse ever.” —USA Today

“One read, and I’m infected. Spread gets under your skin in all the right ways. Read this now. Your eyeballs will thank you.” —Jason Aaron (SOUTHERN BASTARDS, Scalped, Thor God of Thunder, Wolverine & the X-Men)

“A.) A bio-morphic planetary spread B.) An ax swinging survivor named NO and C.) A red stained baby giggle’n in the snow speak’n squiggles… SOLD! SPREAD, Jordan & Strahm give me nothing but HOPE for the future of horror.” —Nathan Fox (Dogs of War, Captain Victory and the Galactic Rangers, Fluorescent Black)

“…A dude armed with an axe & a baby fighting monsters with eyeballs that try to eat you. I love this comic. Strahm’s art is visceral and kinetic, you’ve never seen dead things drawn so alive.“ —Nick Pitarra (THE MANHATTAN PROJECTS)

“Kyle Strahm’s art is so f***ing gross and awesome I couldn’t wait to see what he was about to draw on the next page. I feel like I need to wash ink off my hands after reading this. Good stuff.” —Skottie Young (Rocket Raccoon, Fortunately the Milk, Oz)

“Just when you think you know what kind of creepy-as-Hell story Jordan, Strahm, and Sobreiro are telling, they shift gears and bring you something that elevates SPREAD to epic levels of apocalyptic
horror.” —Cullen Bunn, (The Sixth Gun, Helheim)

“A perfect fusion of everything great about 80s American horror with a Chanbara movie twist and a healthy respect for the fine art of sequential storytelling.” —TIM SEELEY (REVIVAL, HACK/SLASH, Batman Eternal)

“Spread is a really good horror/action movie I get to be on the ground floor for and watch every month. Kyle Strahm’s art is the best I’ve seen from him today. Wispy and and organic. Going from quiet to horribly disgusting in 0 to 60. Really excited to see where this goes.” —Mike Norton (REVIVAL, Battlepug, The Answer)

“Tell me there’s a comic about a baby and her pet badass fighting to survive packs of degenerate cannibals and the world-eating gore virus that made them, you’ve got my interest. Tell me Kyle Strahm is drawing the thing you’ve got my money. Kyle spits nightmares from the tip of his pen and Spread is the book he was born to draw.” —Dennis Hopeless (Avengers Arena, Avengers Undercover, Cable and X-Force)

“SPREAD reminds me of watching horror movies in my parents’ basement with a rowdy group of friends, a bag of Cheetos, and a case of beer that we found in the woods.” —Chris Burnham (NAMELESS, Batman Incorporated, Officer Downe)

SPREAD #1 reveals that ten years ago, humanity unleashed something ancient that couldn’t be controlled that would later be called “The Spread.” Now, deep inside a quarantined zone, one man named No has found what might be the key to stopping it forever and saving the world.

In SPREAD #2, the situation looks bleak for No. Raiders, slavers, and a hungry flesh-eating Spreadworm stand in his way.

SPREAD #1 and #2 have completely sold out at the distributor level, but may still be available in comic stores. It is currently available digitally on the Image Comics website (imagecomics.com) and the official Image Comics iOS app, as well as on Comixology on the web (comixology.com), iOS, Android, and Google Play. 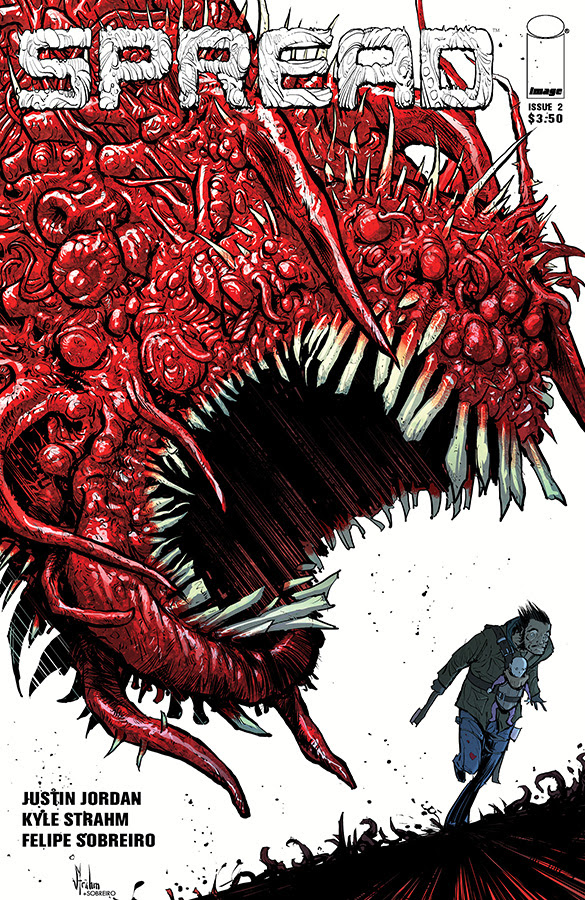