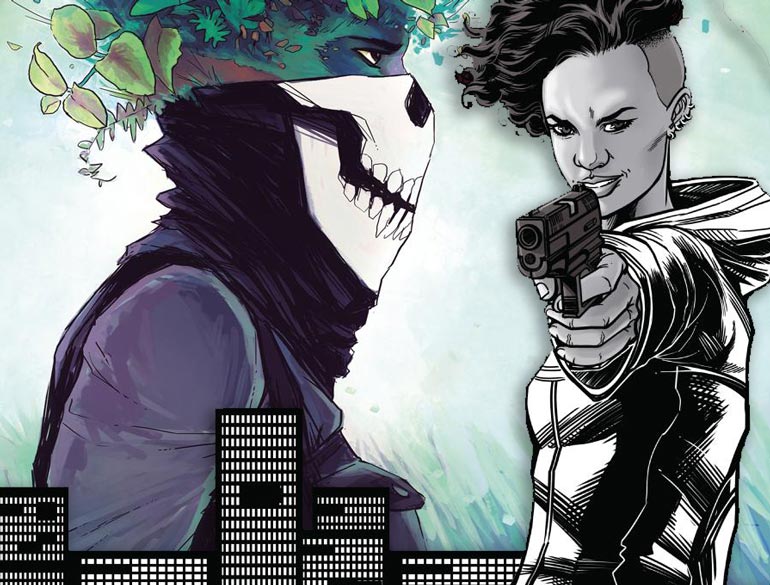 Let it never be said that the staff at Comicosity doesn’t know when to shut up.

[P.S. If you want to catch writers Vita Ayala and Pat Shand doing the exact same thing, you’ll be able to find THEIR conversation at BlackSci-Fi.com soon!]

Emily Pearson: Hello everyone! I have the privilege of talking with Renzo Rodriguez about his upcoming Black Mask Studios book, Breathless with writer Pat Shand. Renzo is also well known for his work on Hellchild as well as various one-shots!\

Renzo Rodriguez: Hello fellas, meet Emily Pearson, an awesome artist with an excellent clean style. I spend a lot of time watching her work! And she will be the artist for The Wilds, an amazing book coming out in February, courtesy of Black Mask! 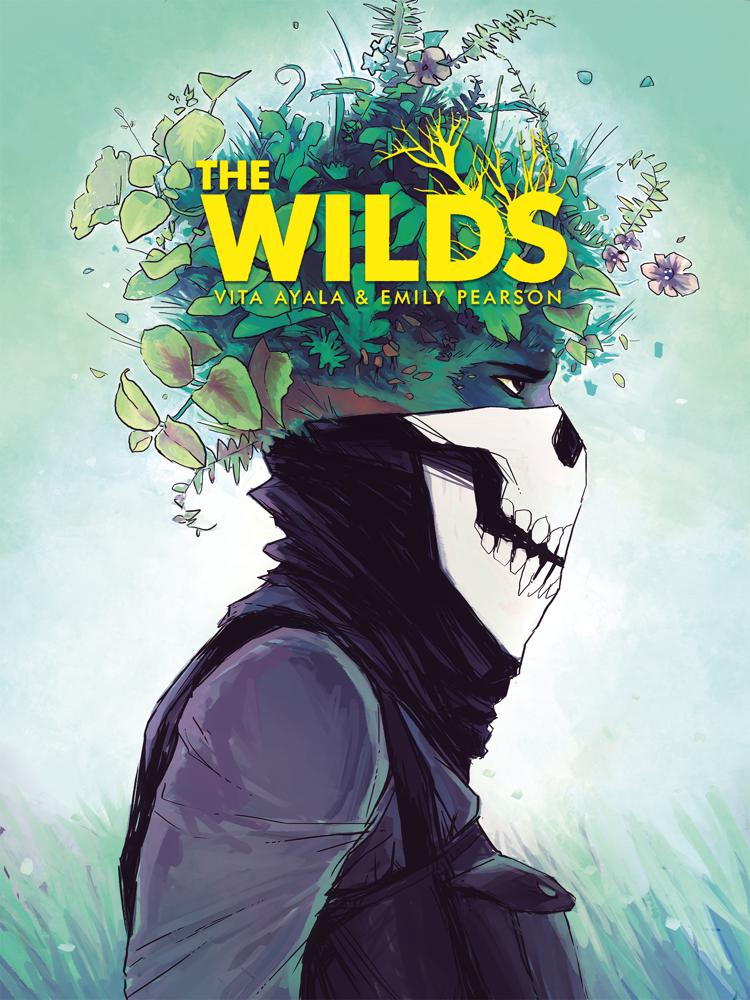 The Wilds #1 cover by Emily Pearson

EP: Thanks! Your style is really clean as well. The linework is amazing. What inspirations made you develop your style to look like this? It gives me a lot of nostalgia for early 2000s era comics, artists like J. Scott Campbell or Michael Turner.

RR: Hahah, thanks a lot. For me those are real COMIC MONSTERS (in a good sense!) I’m an 80’s child, so I grew up watching movies like Evil Dead, The Thing, and Exorcist (I love horror movies), and my very first memory is grabbing a piece of paper and a pencil and trying to copy the gory images from those movies. You know, make it mine. I was a weird kid, hahaha.

So I think my main influence is horror movies, not comic book artists! What about you? I could see an European style, like Sara Pichelli or a Fiona Staples influence on your work! 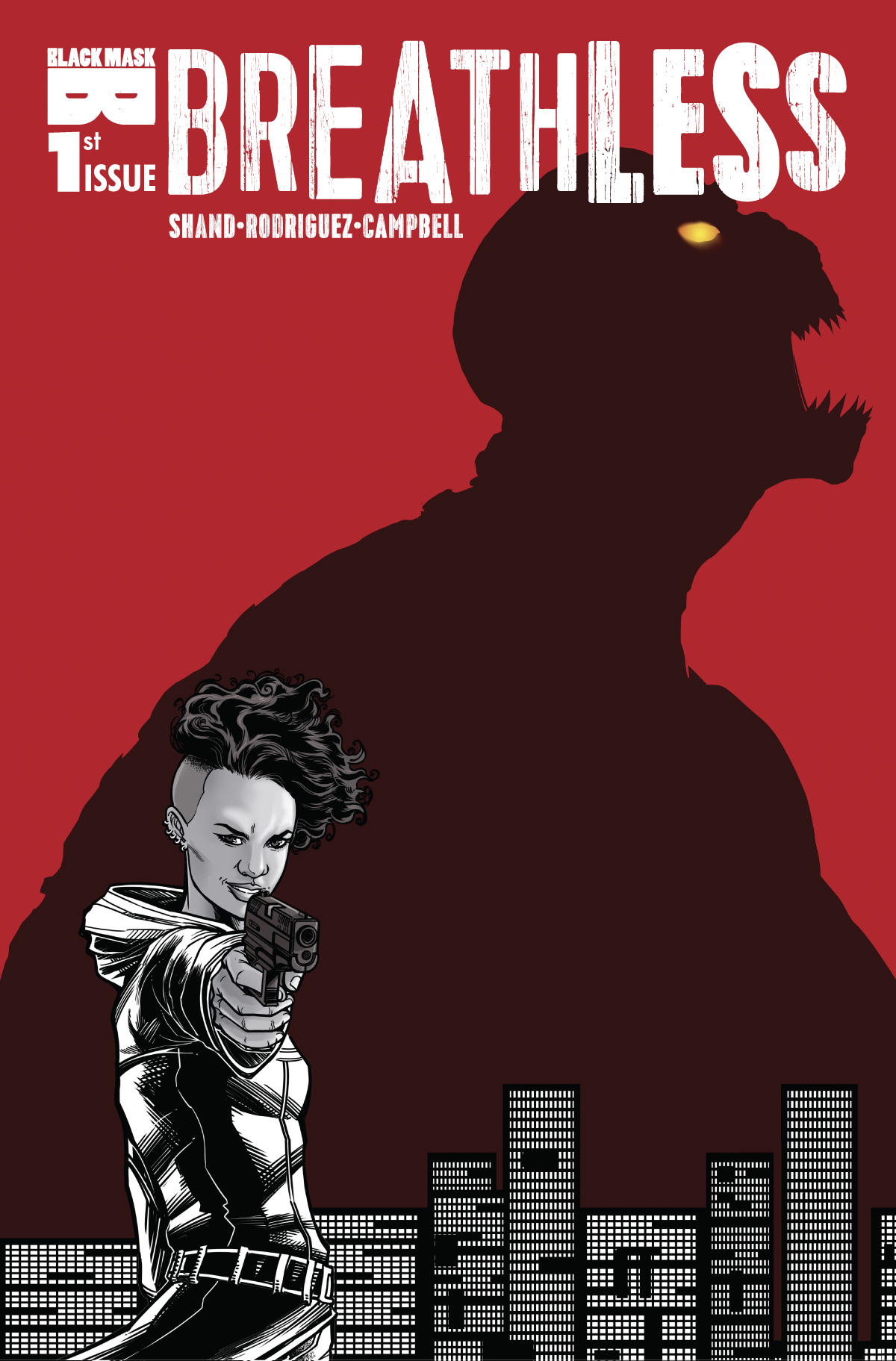 EP: Those are both some of my favorite artists! Reading Saga when it came out really influenced my art style a lot, and got me into reading more creator-owned comics. I used to try to copy comic panels for practice when I was younger to mimic styles I really liked, so I think that definitely got me interested in making a comics-friendly style. I think different comic books I read as well as a lot of video games I played as a teenager really gave me inspiration to my style.

How did you figure out you were interested in drawing comics? Were you interested in them as a kid, or did you start reading when you got older? 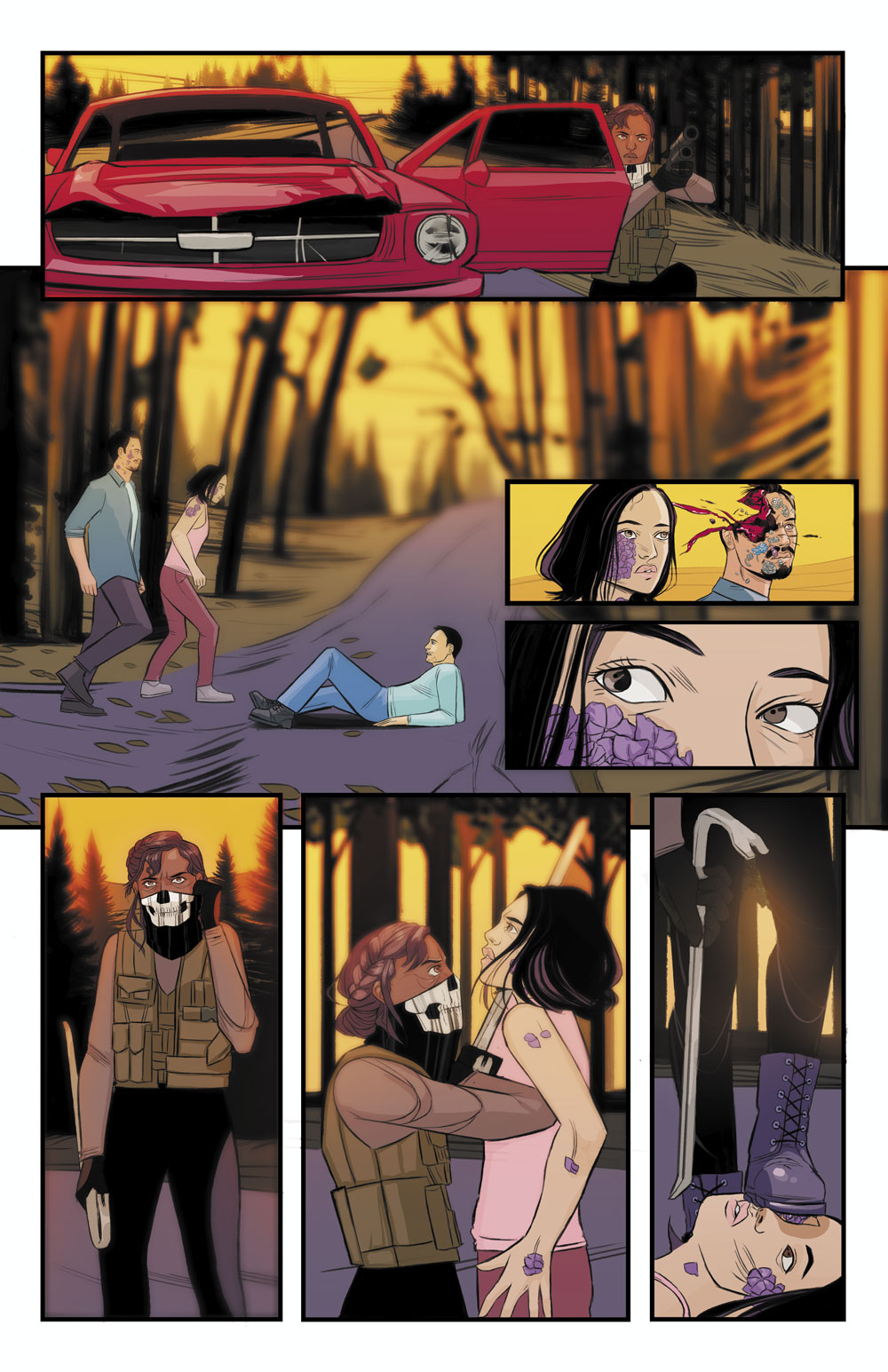 RR: Well, my father was a book and comic book fan, so, since I remember, we always had plenty of books and comic books in my house, so it is in my veins. It was an organic transition from reading comics to making them.

And for some reason I always knew (and still believe on it) that I have to draw to make money. Ever since I was a kid, I knew that was my ultimate goal: just draw. I started with pencils, when I was 13 or 14 meet the nib, brush and ink. And in the mid 2000’s, I started to move to digital devices. But I still love the old pencils! I bet you use a wacom tablet too, right?

EP: That’s great, I remember experimenting with nibs and other things around that age as well. I use an Intuos 5 with Photoshop CS6. Digital’s great, I love being able to fix my mistakes, but I also miss traditional a bit, so I’m trying to find my stride with that. How did you and Pat meet, and decide to start working on Breathless? 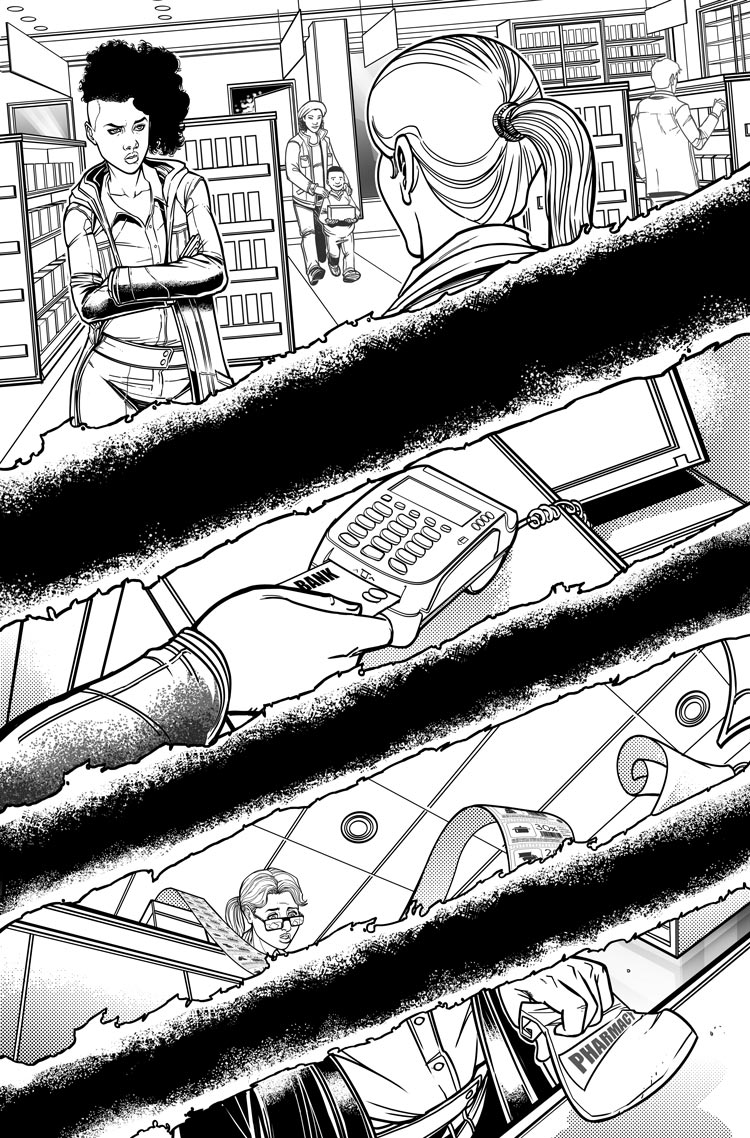 RR: Same device and program here!!! Well, I’ve been stalking Pat since 2013 (or even earlier) hahaha, I use to read a bunch of his work, cause he has a unique style. His characters feel so real, you know, almost like those are a real people with real problems. So I started to send samples, and interact with him on FB.

And finally Hellchild was my chance to work with the Awesome Pat… aaand it was a BLAST! Every page, he pushed me to improve myself with crazy stuffs, monsters, snakes, vampires and lots, looots of blood! A match made in heaven!!

So tell me, how’s your experience with Vita?

EP: That’s great! I’d been following Vita’s work for a little as well, and we’d been interacting a little on Twitter. I ended up reaching out to them, and asking them if they were interested in doing any pitches. We went over a few stories, and both decided on what became The Wilds! They ended up pitching it to Black Mask and the rest was history! 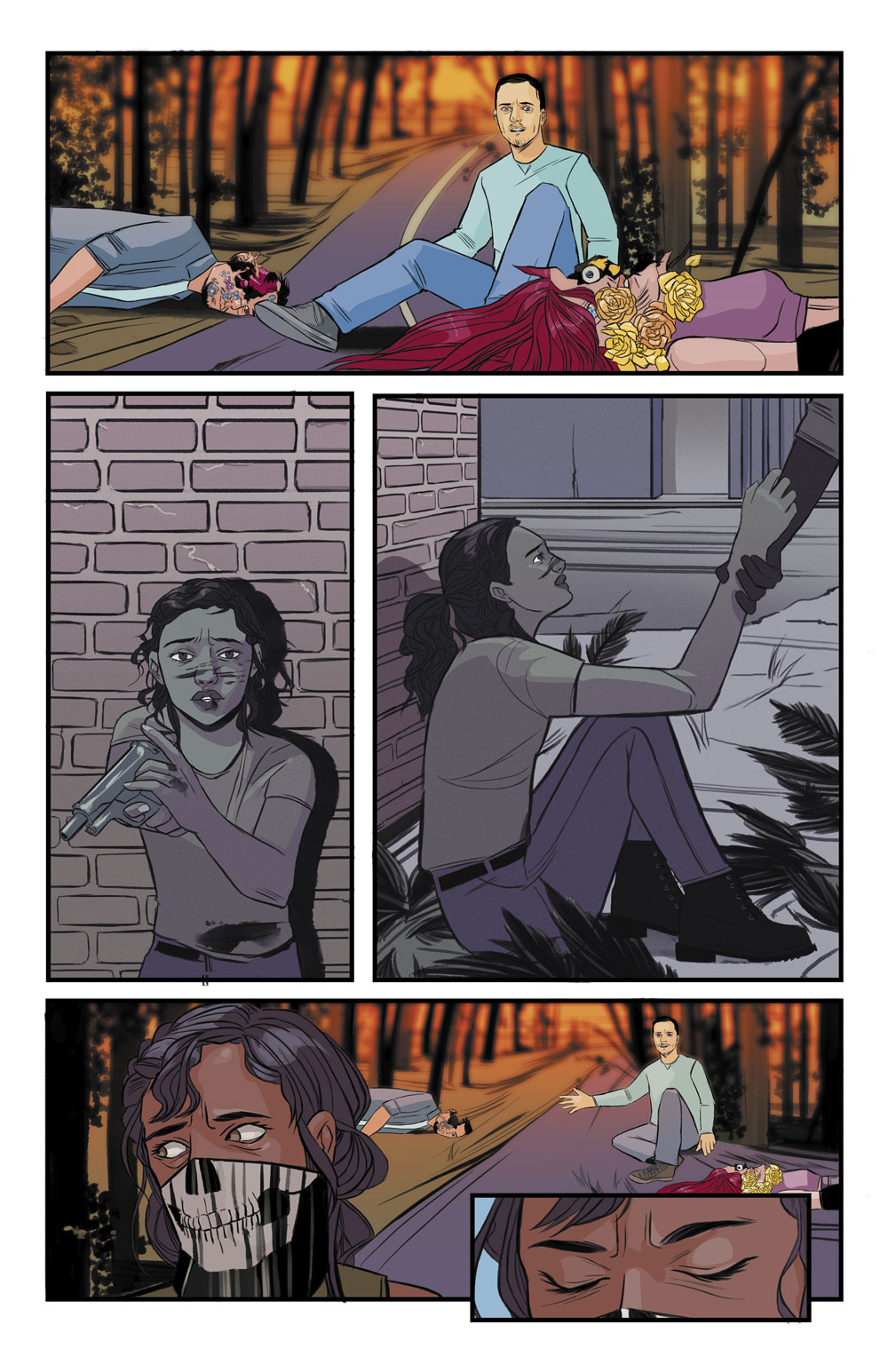 How did you end up coming up with the design/look of the main character from Breathless, Scout Turner? She looks so badass! (especially her hair!)

RR: Hahah yeah, I forget to mention, that after we finished Hellchild, I keep in touch with Pat. So after a few months he came with some cool ideas for a cool pitch with a Buffy-flavor.

The lead character will be an asthmatic African-American woman (I told ya, Pat makes the best characters ever!!) She is based on Samira Wiley and the hair style was an interesting addition, Pat is well known for his cool taste on hairstyle with female characters. And after some short sketches, we have the great and one Scout! 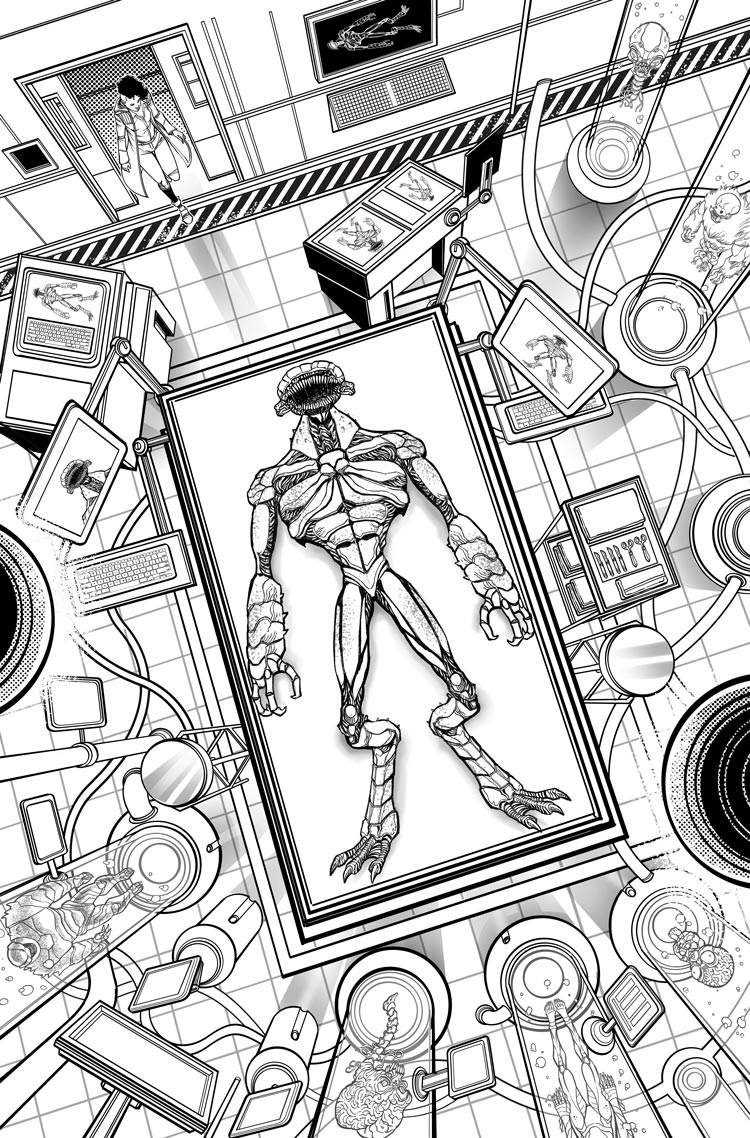 So, tell me about the lead character on The Wilds. She also has a very cool look! Feels so modern and next door feel!

EP: Thanks! Daisy Walker is a super great character to draw. She’s a runner for her compound- which means she trades/salvages goods. Vita actually suggested basing her off Gina Torres, and although the end result doesn’t look super similar a lot of inspiration like the hair, etc came from her. I’ve drawn her tons of times, and I’m still far from tired of drawing her. What’s your process like for working on Breathless and other books?

Do you turn on tunes, work at certain times of the day, etc?

EP: Me too! She’s such a cool character in Firefly!

RR: Well, I’m a “Mr. Mom” hahhaa. I have 3 kids, so I have to wake up early (like 6 am), get the children ready for school, take the car, go and pick them up, feed them… you know, I’m a mom!! So I draw when I can, I have no time to waste or “artist mental block” so I draw when I can and sleep only like 4 hours, hahah, but I love it! (Hope you have a more regular and easy life, hahaha.) 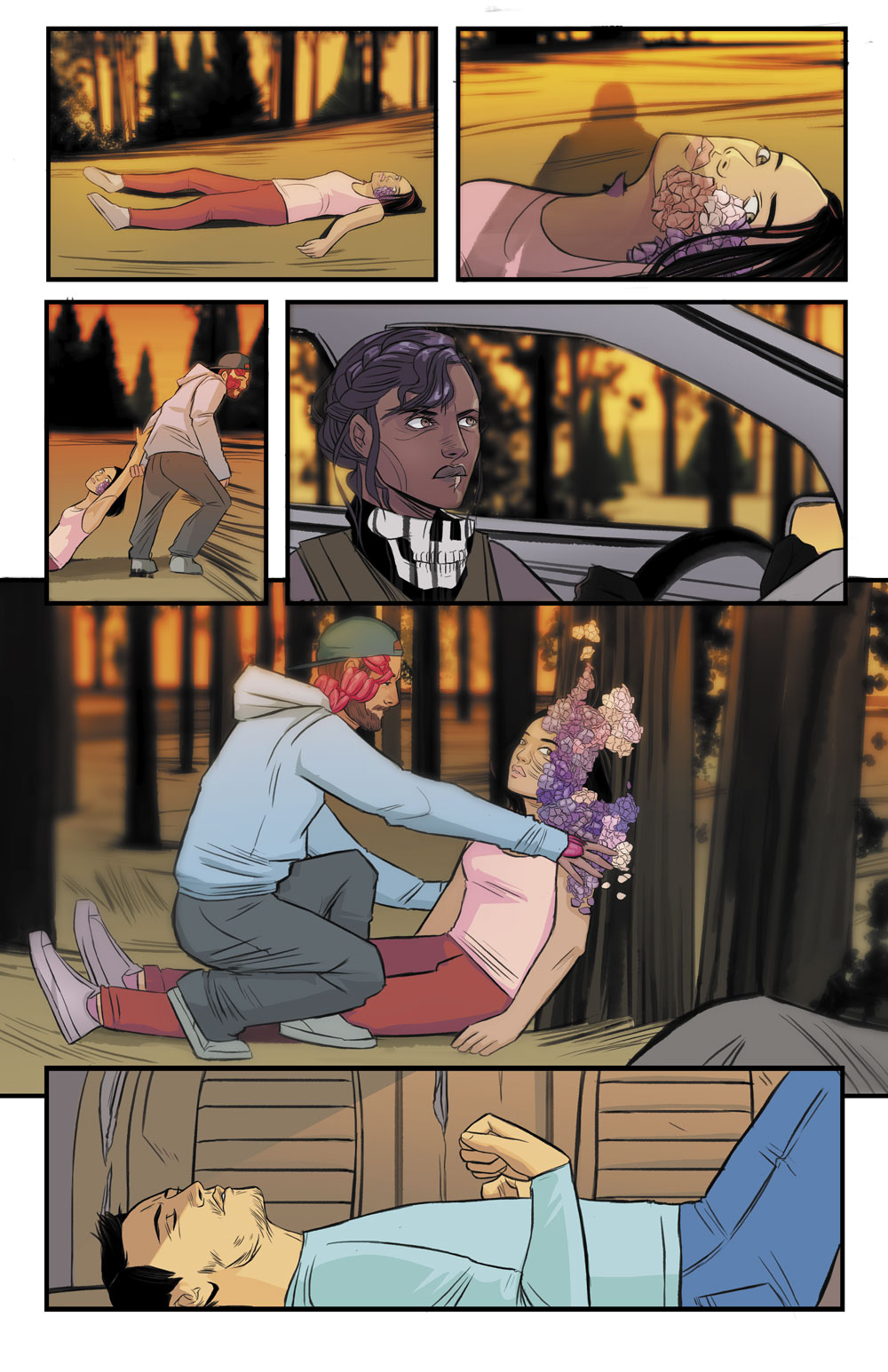 EP: Haha! Yeah that’s crazy, I’m only a dog mom, so my schedule is pretty open to just drawing all day. If I’ll have time I’ll try to get up to 2 hours of studies before I draw, but I’ve been super busy on The Wilds lately. Do you have any comic-related goals or plans for 2018?

RR: Hahaha If you think on having some children… think TWICE!! hahaha just kidding. Well I planning keep myself busy, I become a full-time artist last year and want to keep that way until the end of my days. I have some ideas for personal projects I’m planning to develop little by little between pages and have it landed for a pitch maybe in the middle or end of the year. And I don’t know, keep indie and draw a bunch of monsters. I think I’m not superhero material. 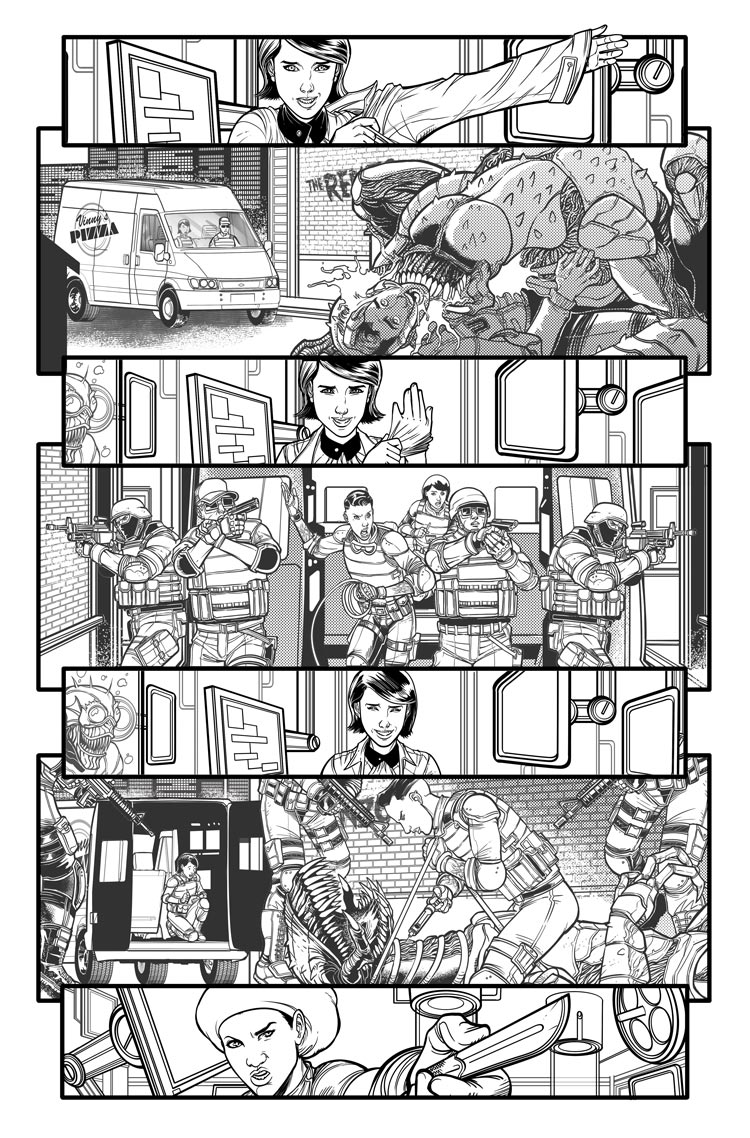 EP: I’d like to do both! I love DC and Marvel, but working with Black Mask has been so great. I’d love to go back and forth between creator-owned and work for hire, I feel like there’s many pros and cons to both.

As long as I’m working on art full time I don’t have much to complain about. But I would eventually also like to make a few of my own stories as well.

Thanks for chatting with me! It was really cool to get to know you, don’t be a stranger!

RR: Thanks a lot Emily, you made this experience very cool. It is awesome to know more people from this media!