Welcome to the weekly Comicosity roundup of all things Infinity, including issue power rankings, previews, interviews and more. This is your one-stop shop for everything Infinity!

The reviews are in… 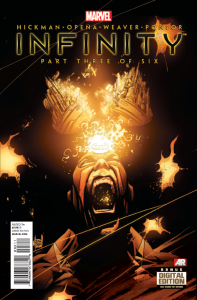 …the reason several moments in this issue soar is the fantastic work of Jerome Opena and Dustin Weaver. Focusing on separate halves of the event, each delivers spectacular action, strong character moments and explosions that are simply fantastic. Opena’s cosmic work is immensely grand in scope, with an amazing attention to detail that shows how dire the situation against the Builders is. Above and beyond the big fiery action, his facial work is so precise that a look between two old friends can speak a thousand words and instill hope in a group that has been beaten down by forces beyond what they have ever faced before. Weaver’s focus on the Inhuman/Earth side of the equation highlights his ability to pencil raw emotion and have it leap off of the page. His characters exude immense amounts of strength and will, and you have no choice but to believe this will be one of the most epic battles in the history of the Marvel Universe. Madness, fear, arrogance and immeasurable power radiate from his pencils and Weaver proves he is up to the challenge of penciling some of the more destructive scenes I have witnessed in a Marvel comic. This art is, quite simply, top tier. These two pencilers are in the upper echelons of talent in the entire industry and they showed why in Infinity #3.

This explosive comic features the culmination of many events and strikes up dozens of more paths for Hickman to go down. This issue makes the event as a whole even larger than it has been and the powder keg of tension that Hickman has been building has finally exploded. Opena and Weaver match his script beat for beat and do an admirable job delivering the huge events he is unleashing upon the Marvel Universe. While the content may seem thin at points due to the huge visuals being thrown at readers, I dare you to read the next page and not continue this series. 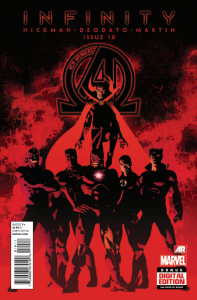 Hickman’s characterization in this issue is excellent, nailing the voices of the Illuminati members and building on an already menacing Thanos that he has introduced earlier. He also maintains the New Avengers tradition he has started in these 10 issues of weaving multiple storylines through the book, dealing with the constant tension between Atlantis and Wakanda, the manipulations of the Inhumans, new revelations about Thanos, and the constant threat of incursions. Issue #10 does act as a setup issue for these storylines more than some of the other issues in the event, and it definitely slows the breakneck pace of Infinity down. Hickman has planted the seeds for some huge payoffs during this event that I think outweighs the setup factor, nonetheless. 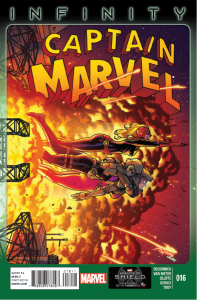 Captain Marvel might be struggling with the question, “Where is the love?” for her teammates, but she hasn’t forgotten how much of a badass she is in battle. This latest issue continues the Infinity fallout from the Battle of the Corridor that happened in Avengers #18 as well as Captain Marvel #15.

Patrick Olliffe’s art has quickly become my favorite for the lady with many hairstyles (to say Captain Marvel has had lots of hair is an understatement.) The artwork has clean, flattering lines. Andy Troy’s colors help to keep the scene bright and vibrant despite the ensuing space-battle black filling up opening backgrounds.

Smart aleck remarks, space fights, and exploding ships equal a book that is all fun and adventure, without any previous reading really required. Whether you are following Infinity, Captain Marvel or just looking for a book to jump on-board the Captain Marvel fan train with, this issue delivers for any level of reader. 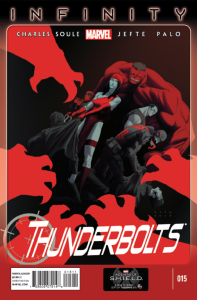 This issue is, for the most part, the craziest family RV trip into the City that you’ve ever seen, with Punisher driving and the rest of the kids whining. This issue is pretty much pure comedy, and though the tie to the Infinity event is very loose (though could be much stronger going forward) it isn’t an unwelcome surprise to see a lighter take on the event in a fringe title like Thunderbolts.

Jefte Palo’s heavily stylized artwork definitely showcases the lighthearted nature of this comic, though there are consistency issues throughout. His Deadpool is light and filled with energy, an invasion forces are unrecognizable as such. His work with Frank Castle is inconsistent, but his Elektra has a spark in her grin. The strong colour work from Guru eFX compensates and glosses over some of these inconsistencies and keeps the playfulness of the issue intact.

Thunderbolts #15 does a solid job of walking the line between maintaining series independence and tying into an event. Soule delivers a comedic tale getting primed for some explosive action. Art issues exist but don’t damn the book, but any readers coming simply for Infinity action may as well wait for issue #16.

*Check back with Comicosity on Monday for an Infinity-centric interview!

Check back throughout the entire Infinity event for more reviews, previews, interviews and updated Power Rankings as the event continues! Sound off below, what are your Infinity Power Rankings?