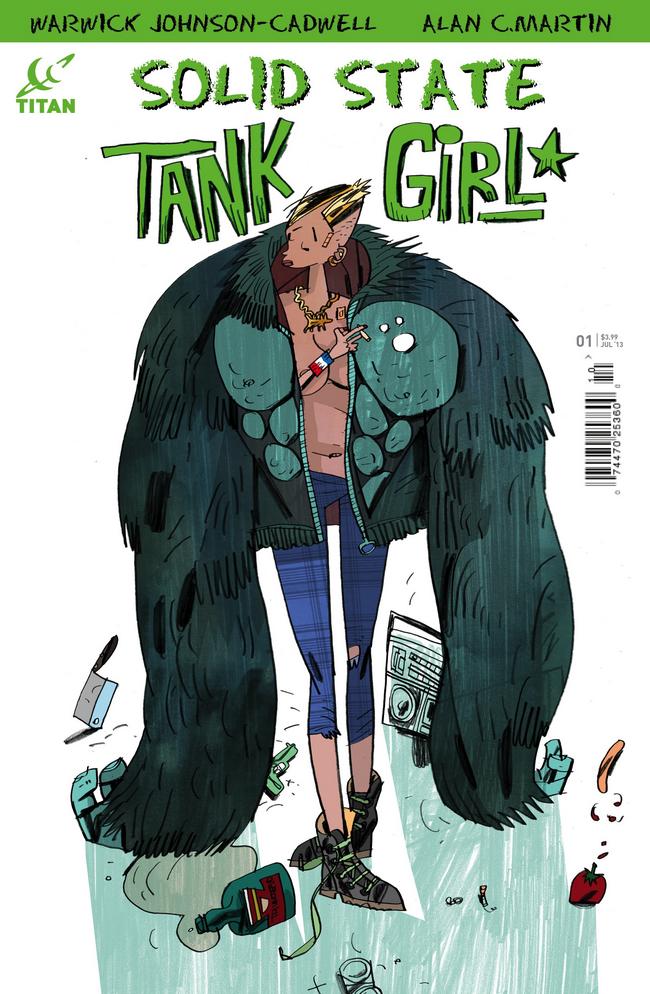 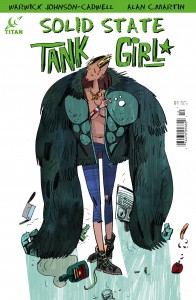 Tank Girl is back and more puerile than ever!

Originally created by Martin and one half of the critically-acclaimed virtual band Gorillaz, Jamie Hewlett, Tank Girl remains one of the greatest counter-culture comics anti-heroines, driving her attitude-laden tank straight into the face of bland, spandex-wearing simpletons!

Tank Girl, Jet Girl, Booga and Barney are back and on a mission to save their favourite little radio store. Things are going according to plan, too, but somewhere along the line Booga manages to electronically summon the gang’s evil counterparts, fronted by the darkest bitch on the planet – ANTI-TANK GIRL! The fight is to the death, as each gang member draws on their deepest, most screwed-up powers to eliminate their own personal nemesis. Things are about to get very dark, very bloody… and very stupid!

The new series has Martin teaming up with debut artist, Warwick Johnson Cadwell. Cadwell was forced to hand-wash eighty-six pairs of Tank Girl’s soiled underpants, scour Jet-Girl’s air-intake and lick Booga’s salty bollocks while dressed as a Glaswegian nun before he was even allowed to submit his art samples. Imagine what he had to do in order to gain Alan Martin’s approval and become the new official Tank Girl artist! We’ll give you a hint: it involved a plunger, an oxygen tank, seven mini-tubs of quick-drying hair-gel, the cogs of an antique watch, the spleen of a goat, and four kilos of body-chocolate.

Steve White, Senior Comics Editor says, “The new Titan Comics imprint is all about taking a chance on new creators and new talent, and pairing Warwick’s street-art energy to Alan’s potty-mouthed imagination has refreshed Tank Girl once again. The results are blindingly good!”

Solid State Tank Girl #1 hits comic stores on May 15, 2013. The series will also be available to read day and date on the iPad, iPhone, Web, Android and Kindle Fire, exclusively through the comiXology app and comiXology.com

Retailers can order Solid State Tank Girl #1 from the February 2013 edition of Diamond PREVIEWS. For updates retailers can sign-up to the Titan Comics retail newsletter, hereor follow @TitanRetail on Twitter.

To keep up-to-date with news from Titan Comics, visit www.titan-comics.com or join us on Facebook or Twitter.