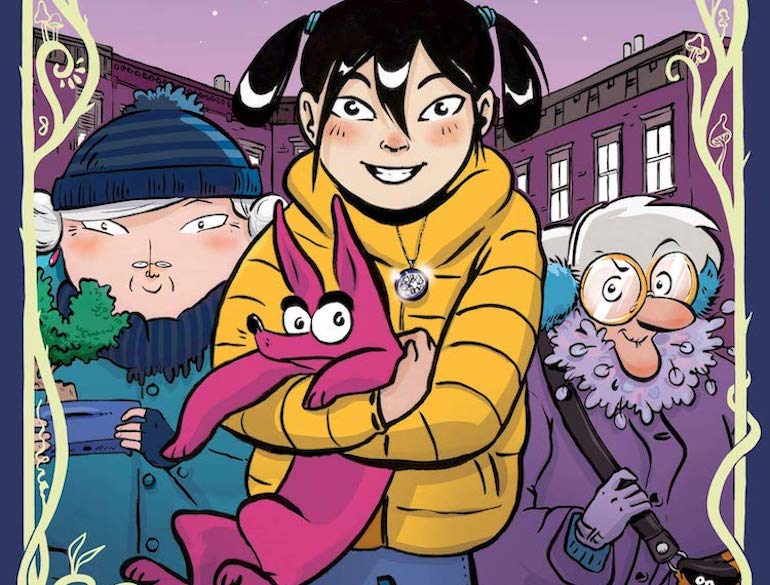 TRADE WAITING RETURNS! It’s been a bit, but we’re back, baby. And with this return, we’re going to call this column “issue #1”, cause comics have volumes and issues and stuff, right? Yeah. Yeah, let’s do this. 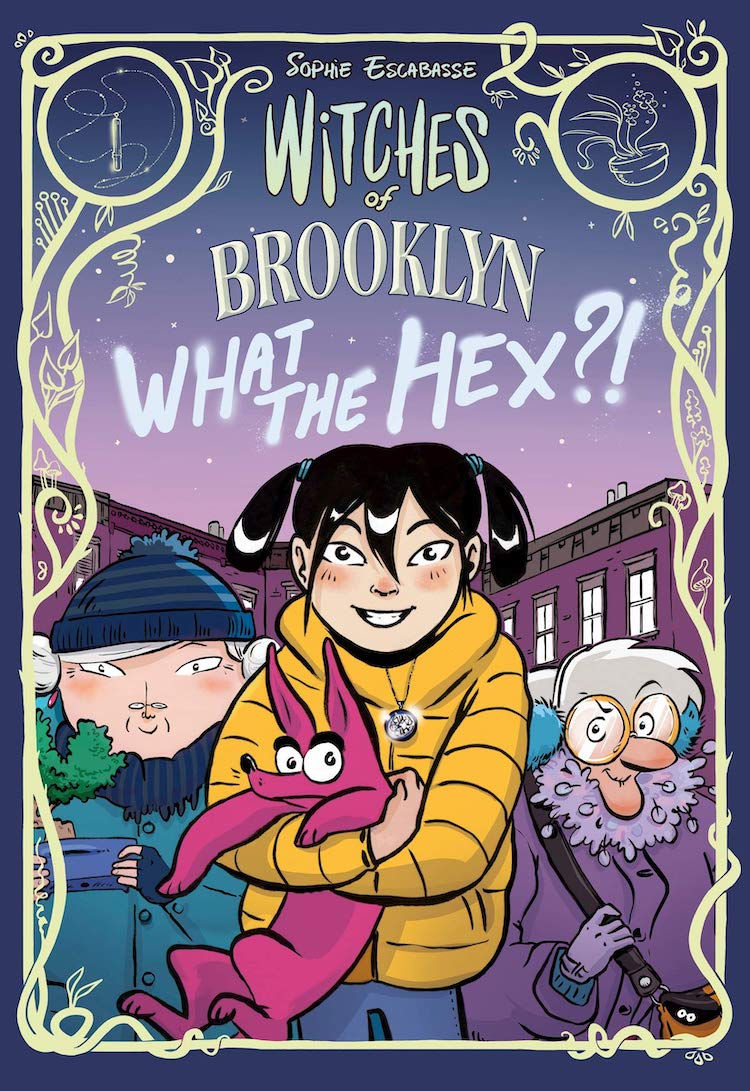 The publisher says: Could there be even MORE witches in Brooklyn?! Effie is EXCITED to meet so many witches, but what is going on with her friends? Suddenly Effie is no longer the newest kid in school, and it seems like her friends are happy to grow their little group, but Effie isn’t so sure. On top of that, learning magic is HARD WORK!

Effie just wants to have fun being a witch, but her life in Brooklyn is about to get weird(er).

What I say: The first volume of this series has been read in my house at least 284 times. When Random House was kind enough to send a copy of this for me to check out, my daughter swiped it from my hands before I could even fully comprehend what was in the envelope. Pitch perfect for the season, if you’ve got a younger reader in the house who digs witches/magic, just pick up both volumes when you’re at the store and save yourself the inevitable second trip.

Check out a preview of the first volume here: https://www.penguinrandomhouse.com/books/608951/witches-of-brooklyn-by-sophie-escabasse/ 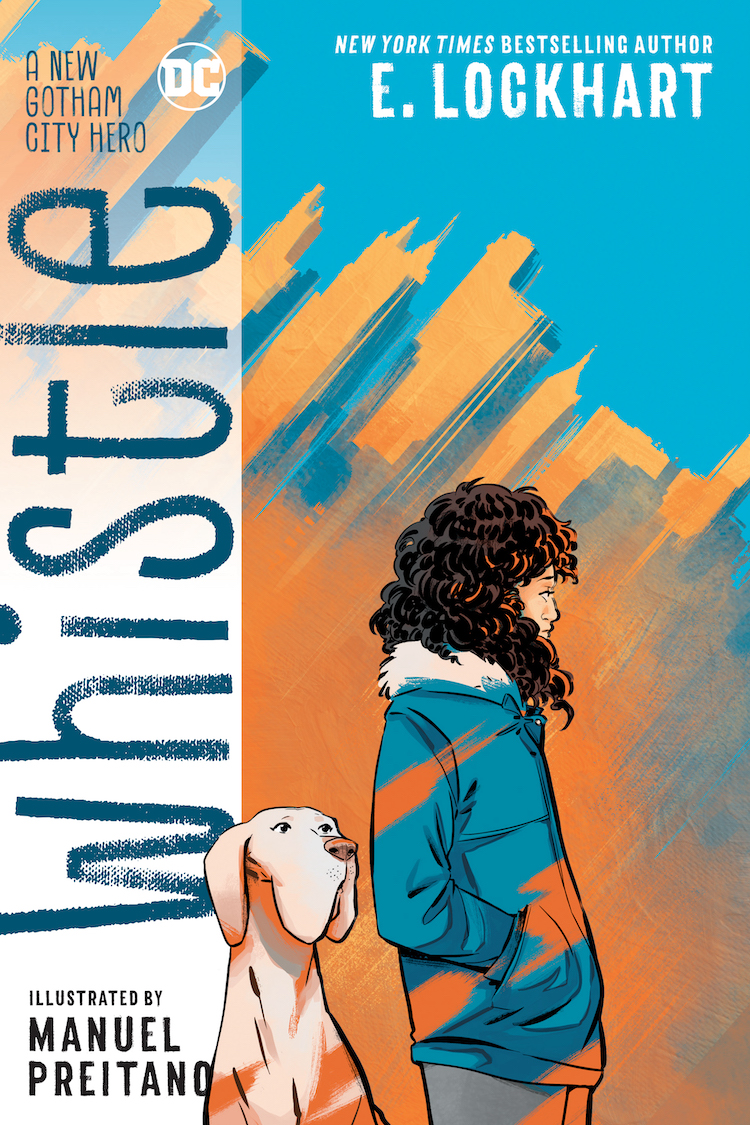 Sixteen-year-old Willow Zimmerman has something to say. When she’s not on the streets advocating for her community, she’s volunteering at the local pet shelter. She seeks to help all those in need, even the stray dog she’s named Lebowitz that follows her around. But as much as she does for the world around her, she struggles closer to home—taking care of her mother, recently diagnosed with cancer. Her job as an adjunct professor of Jewish studies does not provide adequate health insurance—and Willow can see that time is running out.

When in desperation she reconnects with her estranged “uncle” Edward, he opens the door to an easier life. Through simple jobs, such as hosting his private poker nights with Gotham City’s elites, she is able to keep her family afloat—and afford critical medical treatments for her mother.

Willow’s family life quickly improves through the income provided by these jobs, but it comes at the cost of distancing herself from the people she truly cares about. Her time is now spent on new connections, such as biologist and teacher Pammie Isley. And when Willow and Lebowitz collide with the monstrous Killer Croc outside the local synagogue, they are both injured, only to wake up being able to understand each other. And there are other developments, too…strange ways in which they’ve become stronger together. Willow’s activism kicks into high gear—with these powers, she can really save the world!

But when Willow discovers that Edward and his friends are actually some of Gotham’s most corrupt criminals, she must make a choice: remain loyal to the man who kept her family together, or use her new powers to be a voice for her community.

What I say: Hey Willow, I see you have a dog. You are now my favourite Gotham based character. 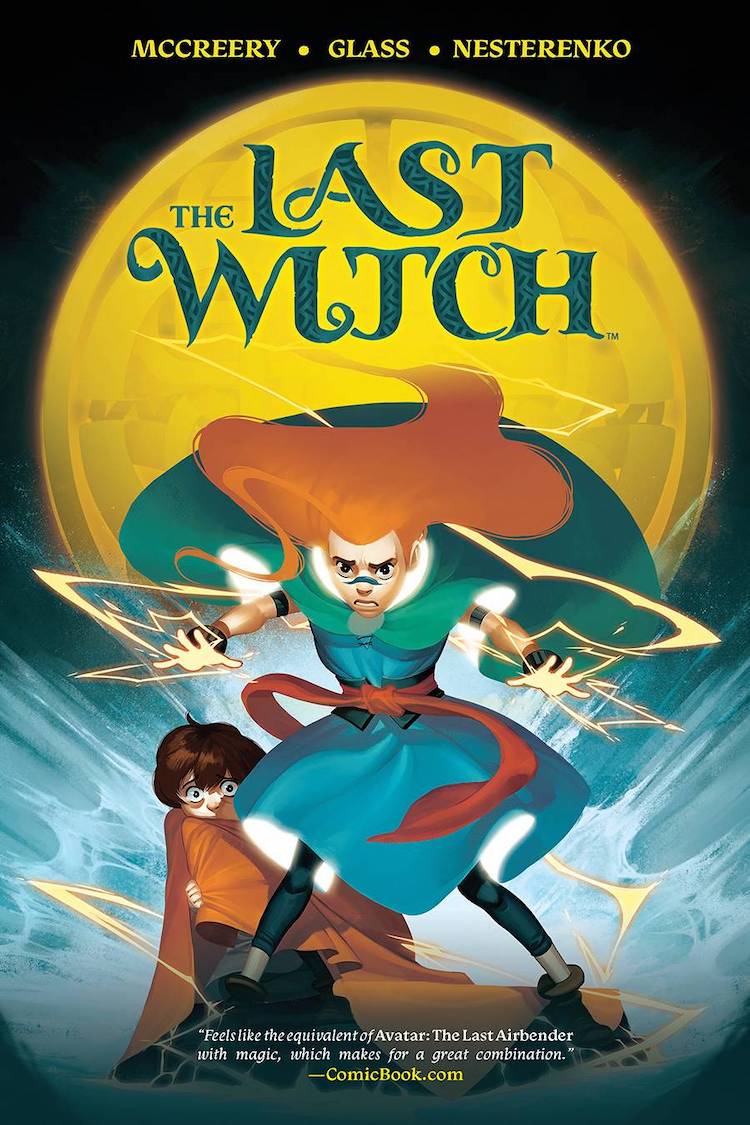 The publisher sayeth: A new young adult fantasy trilogy about a young girl named Saoirse who must save everyone she loves by discovering the truth about the mysterious mark on her shoulder – and embracing her secret magical powers!

YOU HAVE THE POWER.

It’s the one time of the year when the witch known as Cailleach hunts the children of the village – so Saoirse, a brave and reckless young girl, decides this is the perfect opportunity to defy her father and discover the secrets of the witch’s tower!

But when the Cailleach captures Saoirse and her brother Brahm, their lives are forever changed in ways they never expected.

Now, Saoirse will have to save everyone she loves by discovering the truth about the mysterious mark on her shoulder – and embracing her secret magical powers!

Conor McCreery (Adventure Time/Regular Show) and V.V. Glass (Doctor Who) kick off a new young adult fantasy trilogy that shows the greatest magic of all lies inside of us!

What I say: What an amazing time to be a comics reader. In this Trade Waiting alone we’ve got an embarrassment of riches for YA and Middle Grade readers…not to mention fantasy readers with The Last Witch.

Check out a preview of issue #1 here: https://www.boom-studios.com/wordpress/archives/the-last-witch-1-first-look/ 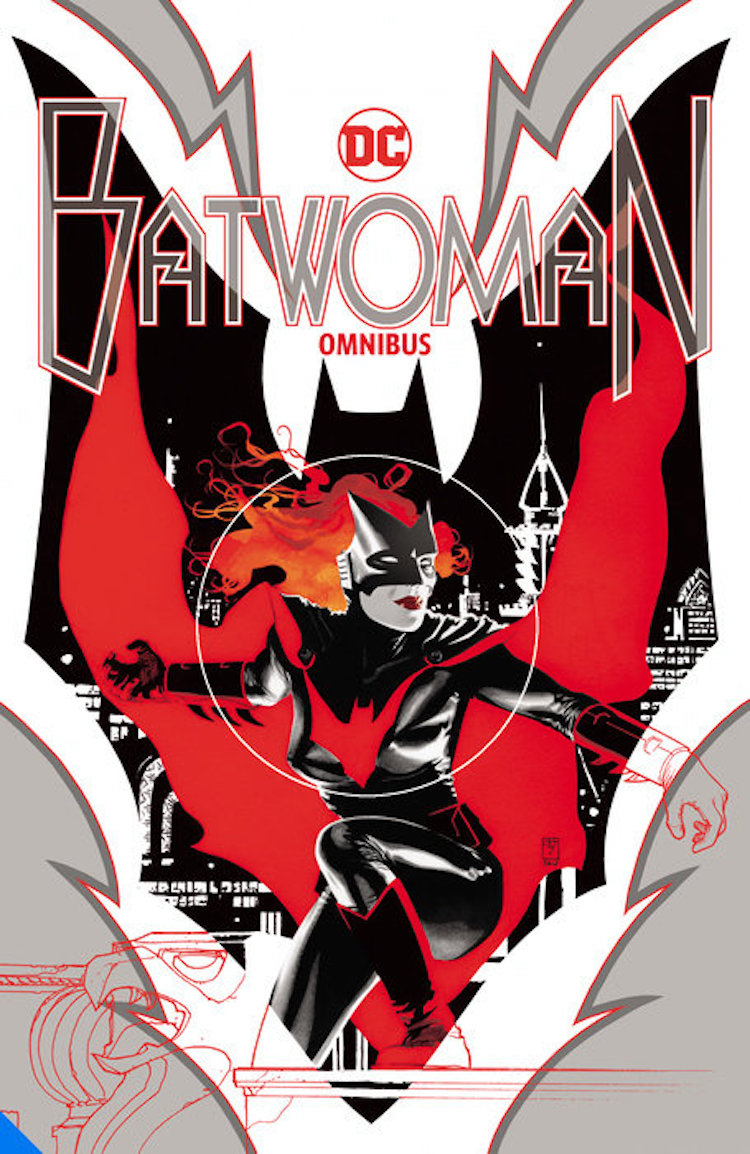 The publisher says: Acclaimed artist J.H. Williams III reveals the shocking origin of one of comics’ most prominent lesbian characters, collected for the first time ever in one epic omnibus hardcover edition!

Determined to continue serving others after her military career was cut short by bigotry, Kate Kane has taken up the identity of Batwoman, leading a one-woman war on Gotham City’s evil underbelly. Who or what is stealing children from the barrio, and for what vile purpose? How will Kate handle unsettling revelations about her father, Colonel Jacob Kane? And why is a certain government agency suddenly taking an interest in her?

J.H. Williams III’s extensive work on Batwoman saw him play both writer and illustrator. Batwoman Omnibus by J.H. Williams III is a visually stunning collection that includes works from his frequent collaborators Greg Rucka and W. Haden Blackman–here in its entirety.

What I say: You know that TV show and the fact that people all over the place know who Batwoman is? That doesn’t happen without the pages inside this collected volume. There is no better way to read comics than an omnibus, and if you are a Gotham fan, you read Batwoman this way. 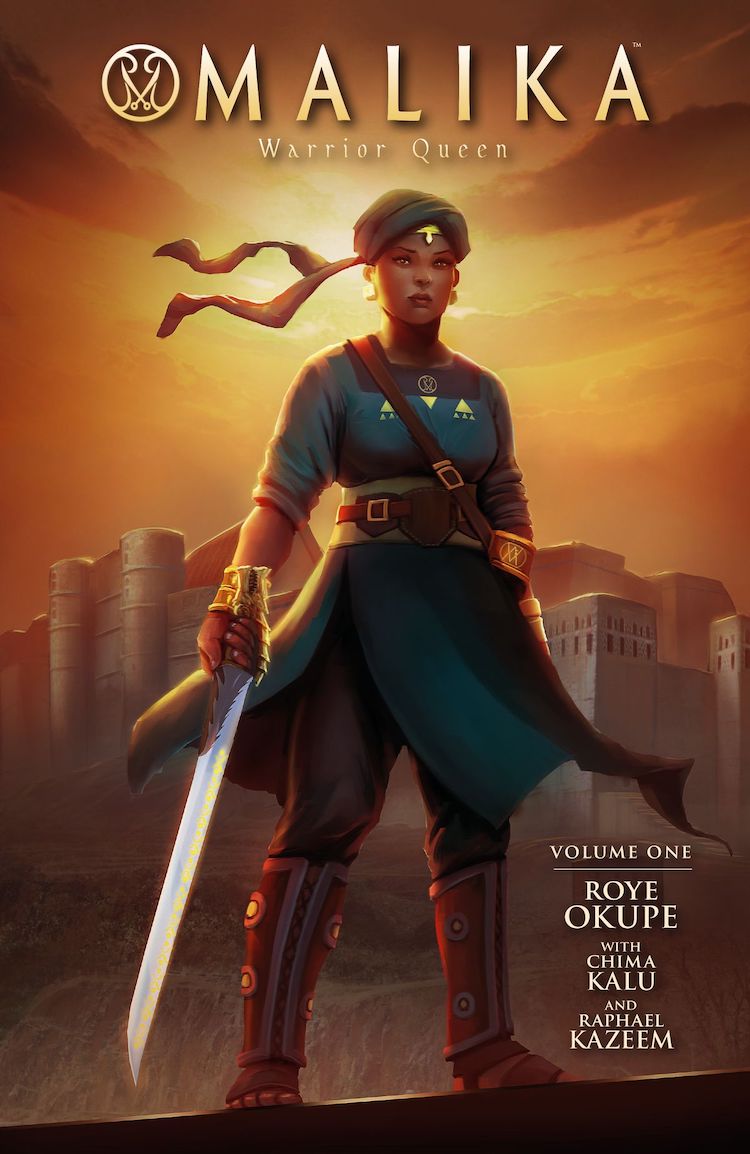 The publisher says: Following the exploits of queen and military commander Malika, who struggles to keep the peace in her ever-expanding empire, Azzaz, this historical fantasy is set in fifteenth-century West Africa and created by an all-star team from Nigeria. In this action-packed graphic novel, African history mixes with drama, politics, betrayal, romance, and dragons!

What I say: Remember what I said about comics today being an embarrassment of riches? A fantasy epic set in 15th century West Africa by a creative team from Nigeria? Hello. 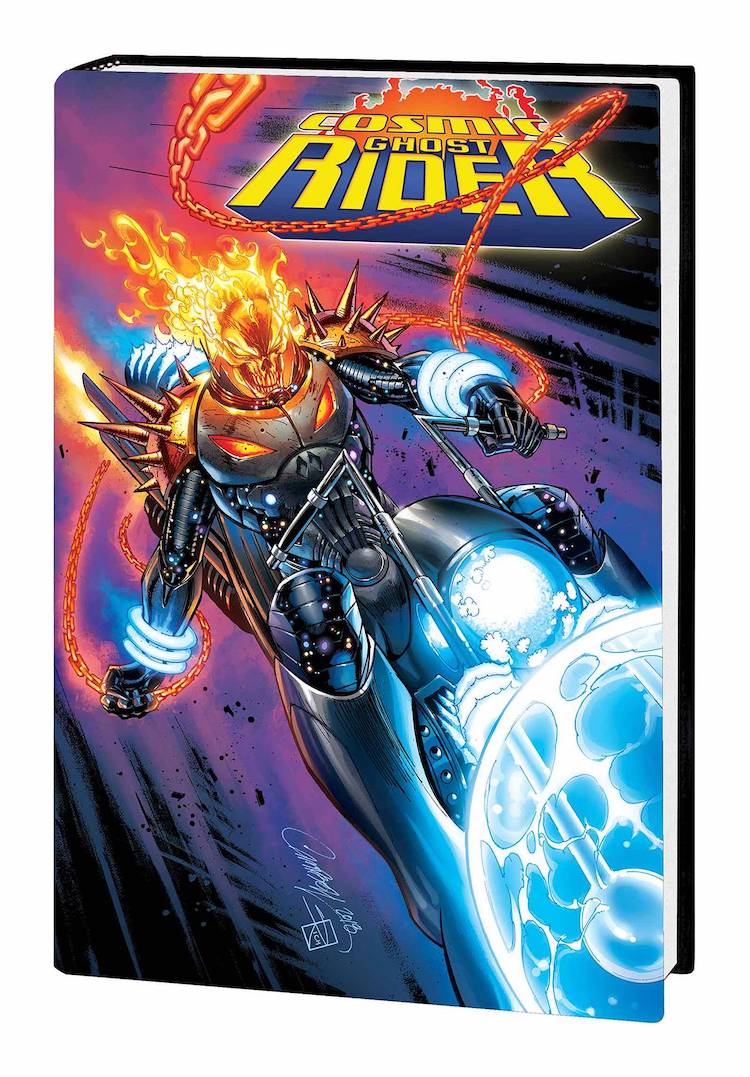 The publisher says: Millennia ago you knew him as the Punisher. Then Frank Castle made a deal with the devil to become the Ghost Rider. An alliance with Galactus made him cosmic. And a dark bargain with Thanos made him…dead?! Now Cosmic Ghost Rider has a time-travel plan for vengeance on his former master. But can even Frank kill…baby Thanos?! Cosmic Ghost Rider wreaks havoc in Marvel’s past, allies with the Guardians of the Galaxy and takes on the Avengers alongside Johnny Blaze! But when Frank’s only friend is endangered, it’s time to take revenge! Collecting THANOS (2016) #13-18, THANOS ANNUAL (2018) #1, COSMIC GHOST RIDER #1-5, COSMIC GHOST RIDER DESTROYS MARVEL HISTORY #1-6, GUARDIANS OF THE GALAXY (2019) #1-6, AVENGERS (2018) #22-25 and REVENGE OF THE COSMIC GHOST RIDER #1-5; and material from THANOS LEGACY #1 and WOLVERINE: BLACK, WHITE & BLOOD #3.

What I say: One of my favourite things about comics is that truly batshit things can take off in wonderful ways. This is a “What If” concept that is jacked full of steroids, the kind of thing you expect to see in a bizarre miniseries and never hear about again….and now there’s a full hardcover omnibus. I mean, the synopsis really says it all: Ghost Rider Frank Castle imbued with the Power Cosmic. Done. 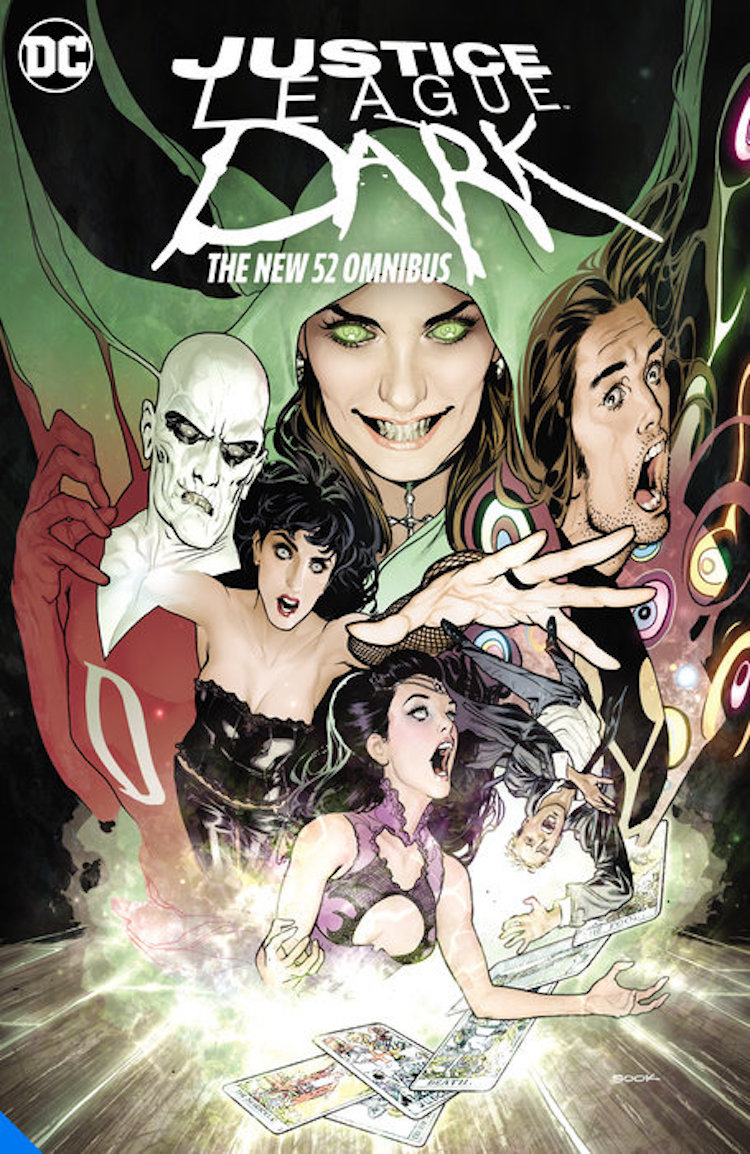 The publisher says: Earth’s magic used to belong to them…and they want it back.

With Earth’s magic being threatened, it’s up the the new Justice League Dark to find out where this threat is coming from! Wonder Woman will have to lead this misfit magic mix of Zatanna, Swamp Thing, Man-Bat, and Detective Chimp against enemies they’ve never before imagined! And it’s only starting there…what awful things are about to come through the Tree of Wonder?

And the Justice League Dark will have to try to seek help from an unexpected place, the only man who could challenge this darkness, Andrew Bennet.

So sayeth I: Coming in at over 1600 pages, this behemoth can act as your next several months of reading material or as a replacement for your kettlebells. JLD was an anchor title of the New 52 and throwing all the relevant issues and storylines into a single colossal tome is just…*chef’s kiss*