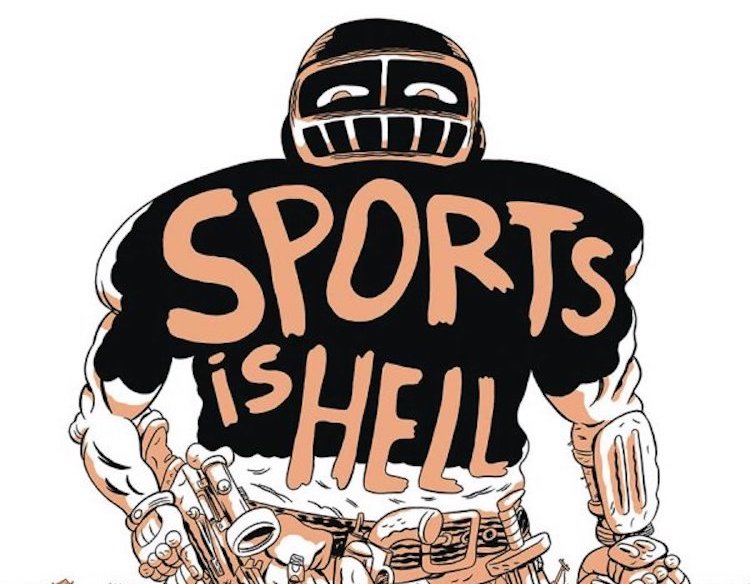 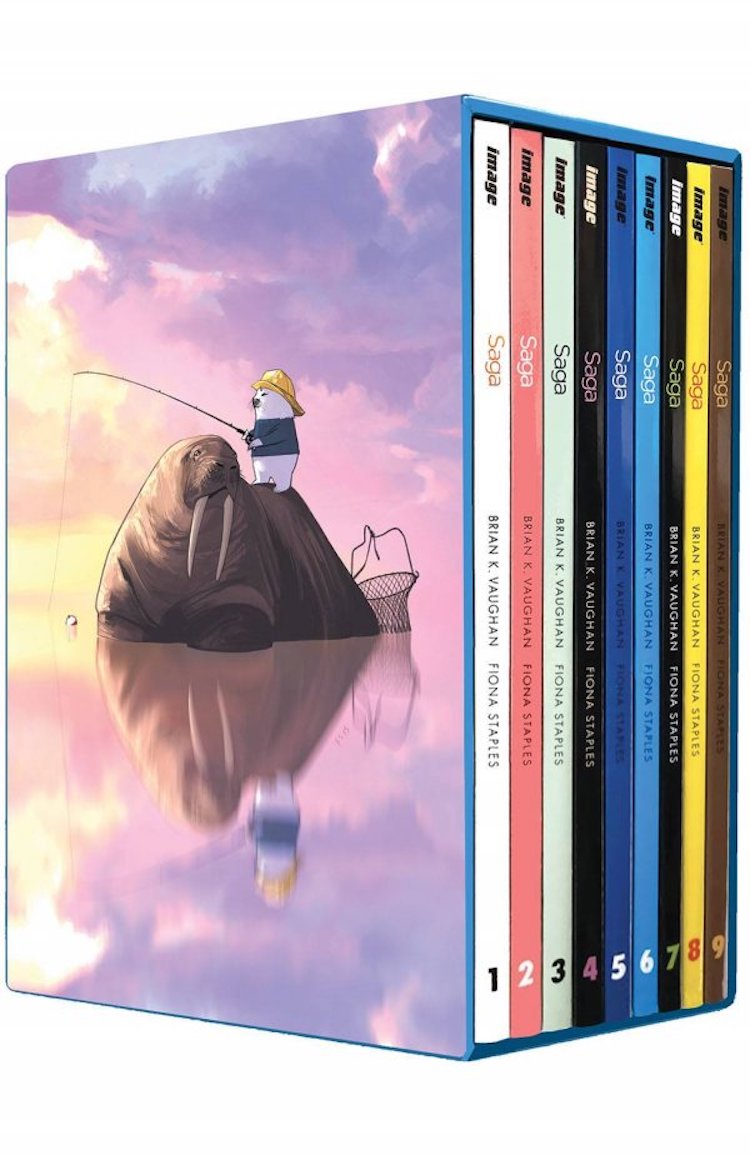 The publisher says: Hey, retailer friends! BRIAN K. VAUGHAN here, interrupting your regularly scheduled solicitation to say THANK YOU for your undying patience while FIONA STAPLES and I have been hard at work on the second half of Hazel’s epic journey. We promise that exciting news is coming, and we wanted to offer your customers a cool new way to catch up on our Eisner

Award-winning series: this gorgeous box set, collecting all nine of our best-selling trade paperback collections in one affordable package. We think it’s the perfect way to introduce any “mature readers” who haven’t yet tried SAGA to our weirdly wonderful universe. Thanks again, and we look forward to gracing your stands with more issues very soon!

COLLECTS SAGA VOL. 1-9 TP WITH A SET OF 6×9 COVER PRINTS EXCLUSIVE TO THE BOX SET!

What I say: Well, if you don’t know Saga, this is one of the most lauded, acclaimed creator-owned series…ever, and now you can get the entirety in a deluxe box with exclusive art prints for less than $150. There you go. 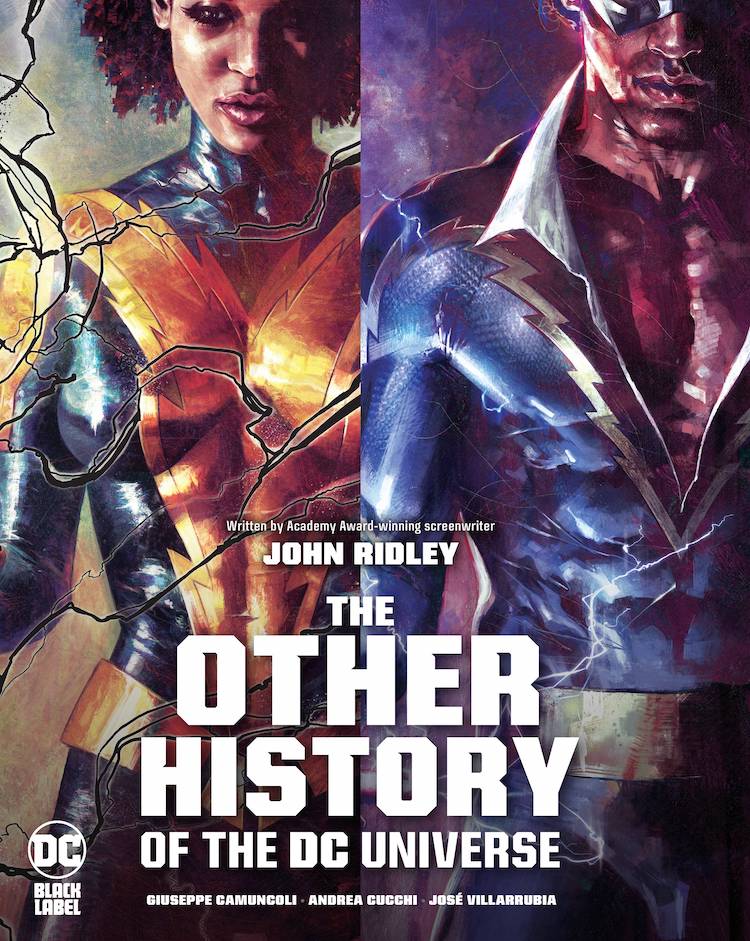 OTHER HISTORY OF THE DC UNIVERSE
Written by John Ridley
Art by Guiseppe Camuncoli, Andrea Cucchi, Jose Villarrubia
Published by DC Comics
Price: $29.99
You can find it here: Bookshop.org 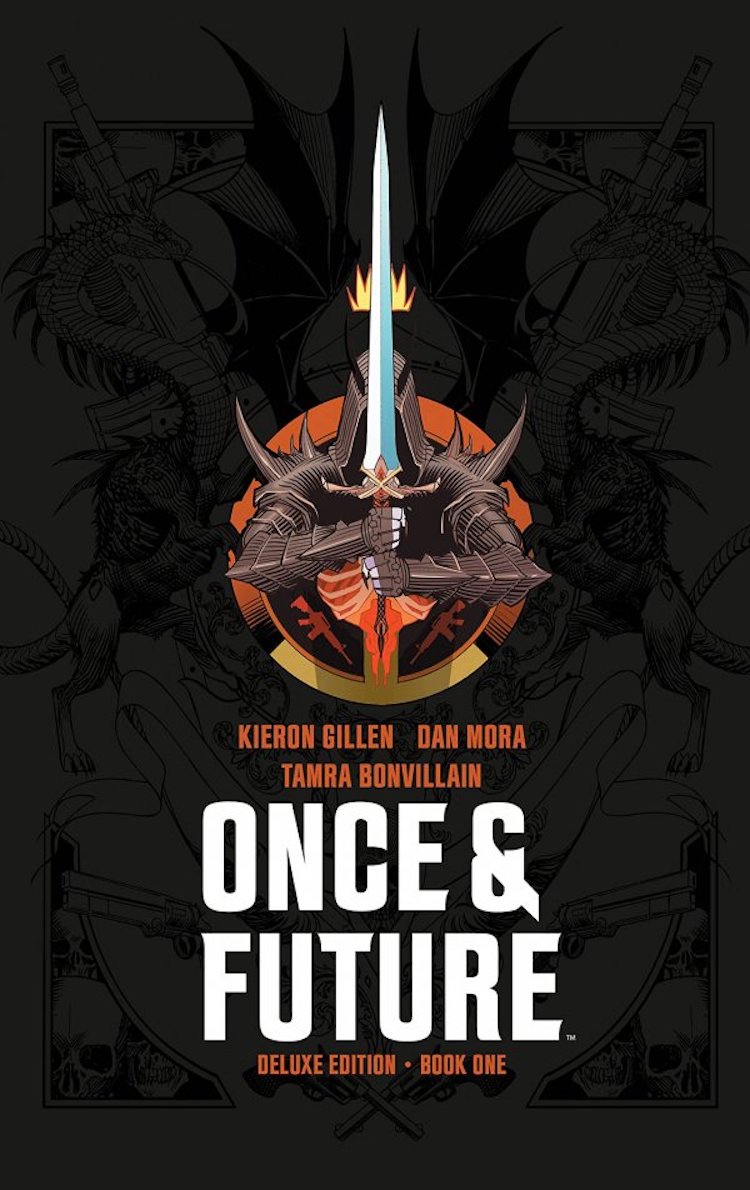 The publisher says: WHAT IF ALL THE LEGENDS ARE TRUE?

Retired monster hunter Bridgette McGuire knows that they are. And when a group of Nationalists uncover the fabled scabbard of Excalibur in order to bring King Arthur back from the dead to reclaim England, she will be the only one who can stop them.

In order to do so, she’ll need to pull her unsuspecting academic grandson, Duncan, into a deadly world of myth and prophecy.

Their quest will lead them to confront the complicated history of their family, confront the deadly secrets of England’s past, and throw the Otherworld into shambles, allowing for new legends and characters to make their appearance–and bring a world of trouble along with them.

What I say: This creative lineup…I mean, Gillen, Mora and Bonvillain are auto-buys on their own. THEY ARE ALL TOGETHER HERE. AND IT IS DELUXE. ALL CAPS EXCITEMENT. 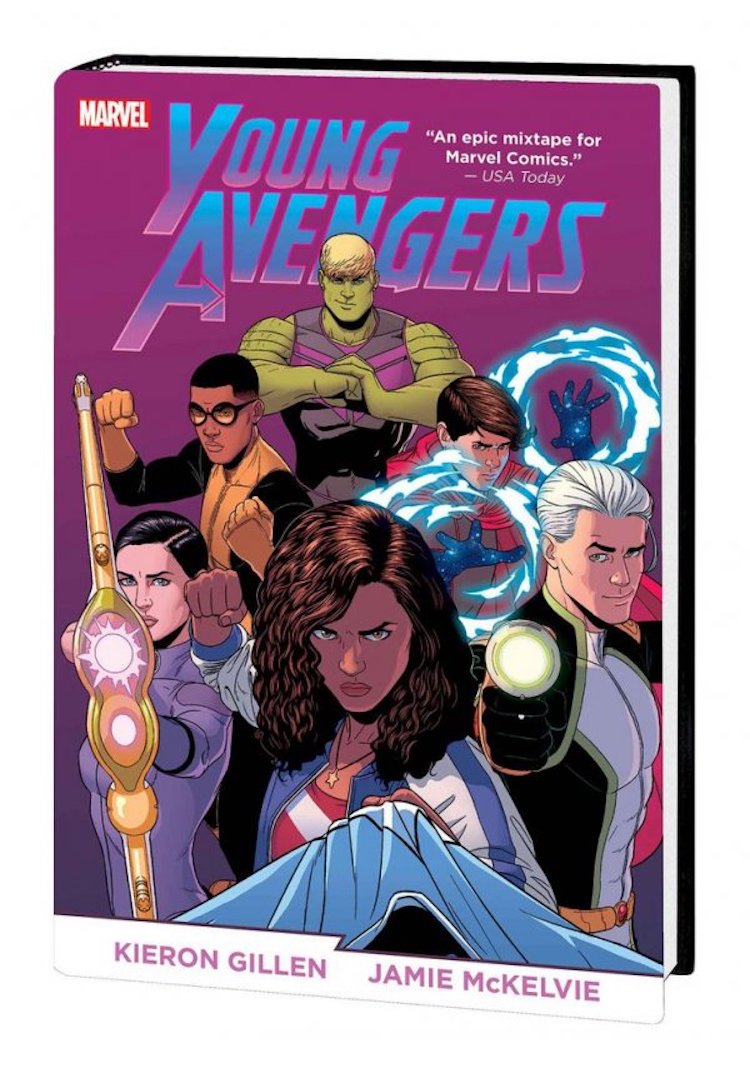 The publisher says: Kieron Gillen and Jamie McKelvie’s groundbreaking, critically acclaimed epic is collected in one oversized volume! The Young Avengers are reinvented for the 21st century as Wiccan, Hulkling and Kate ‘Hawkeye’ Bishop unite with Kid Loki, Marvel Boy, Prodigy and Ms. America. Someone has to save the entire multiverse. They’re someone. No pressure, right? As a cosmic horror emerges from the shadows of the past, the Young Avengers race desperately across dimensions – but once they take on the gig to save reality, they may never be able to go home again! Meanwhile, Kid Loki is up to something. Surprise, I know. Fight scenes! Kissing! Fake IDs! Kissing! Drama! Conflict! Plentiful feels! (a.k.a. ‘meaningful emotional character beats’ for people who aren’t on tumblr.) And oh yeah, nightclubs! Read it!

What I say: So, Gillen has already had an entry on this list and I called his work an auto-buy. He gained that status for me with comics like Young Avengers. His work with Jamie McKelvie on this title is the defining run for these characters and the Young Avengers team as a whole. Absolutely phenomenal work and there’s a certain gifting season coming and most any Marvel fan would squeal to receive this. 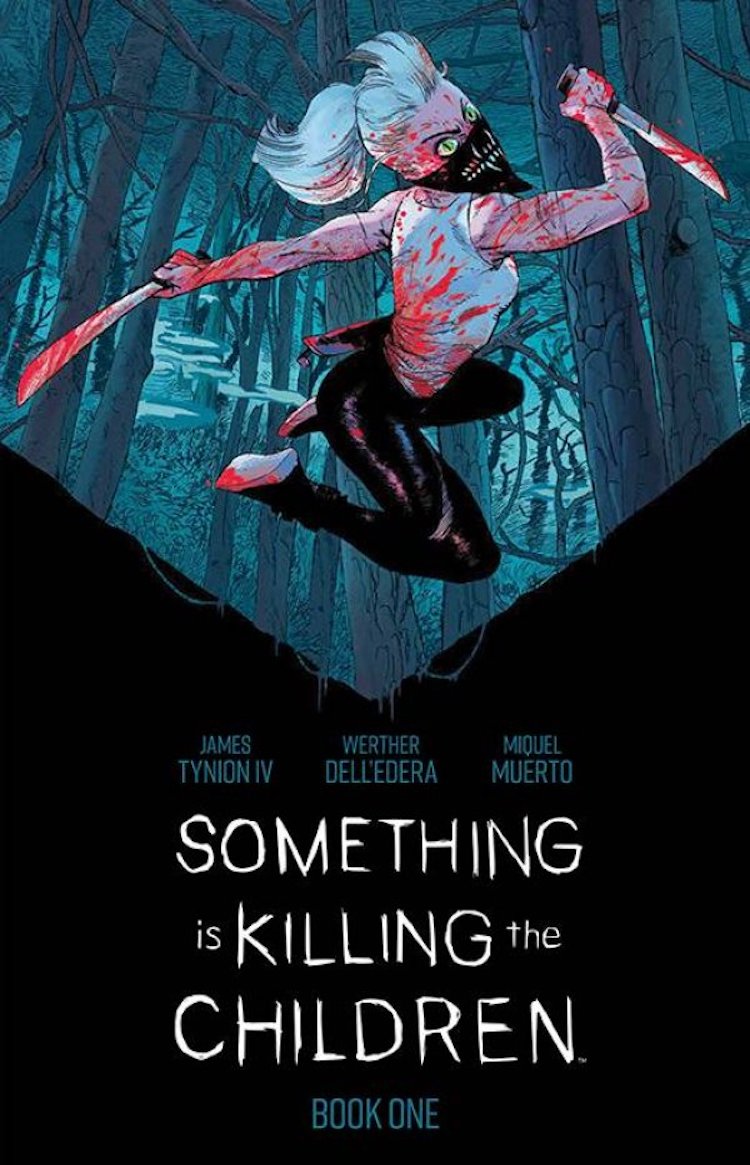 SOMETHING IS KILLING THE CHILDREN DELUXE EDITION BOOK ONE HC
Written by James Tynion IV
Art by Werther Dell’Edera, Miguel Muerto
Published by BOOM! Studios
Price: $49.99
You can find it here: Bookshop.org

The publisher says: Children in a sleepy Wisconsin town begin to go missing with most never returning, and those that do have disturbing stories of horrific creatures that live in the shadows.

There is one person that believes the children and claims to be the only who sees what they can see. Her name is Erica Slaughter. She kills monsters. This is all she does, and she bears the cost because it must be done.

Collects Something is Killing the Children #1-15 in a single deluxe edition hardcover for the first time.

What I say: Look at that goddamn cover! What else do I even say? 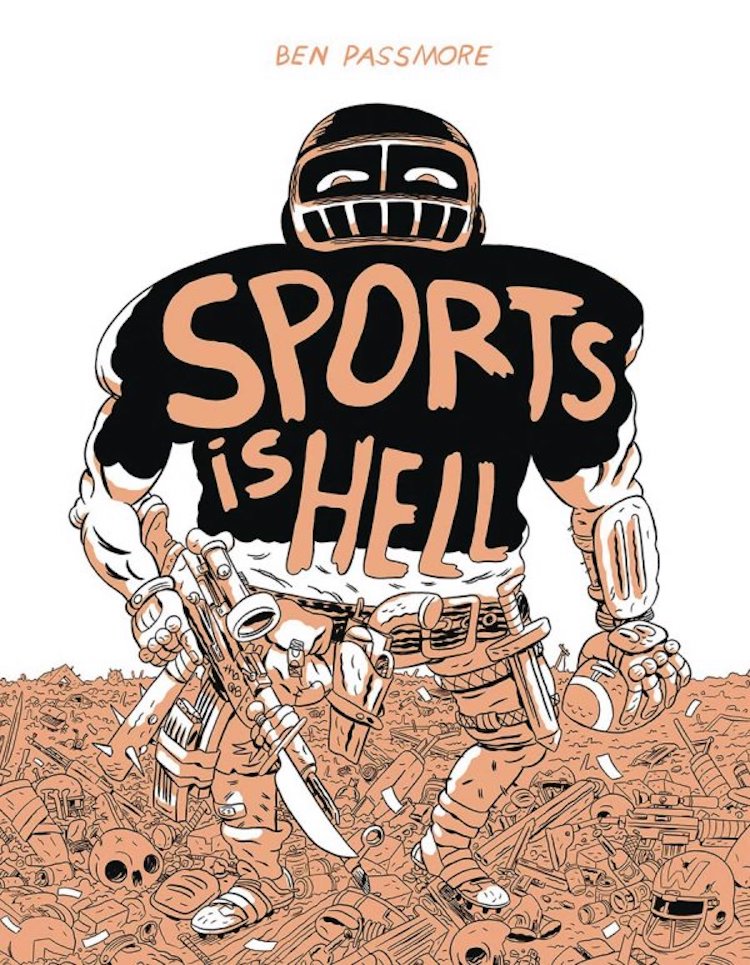 The publisher says: After her city wins the Super Bowl, Tea is separated from her friend during a riot and joins a small clique fighting its way through armed groups of football fanatics to meet a star receiver that just might end the civil war or become the city’s new oppressive leader.”

What I say: This is the kind of unique mayhem you can find outside of the capes in the Big Two and if that cover doesn’t suck you in, then read the synopsis again…that’s gonna get you.