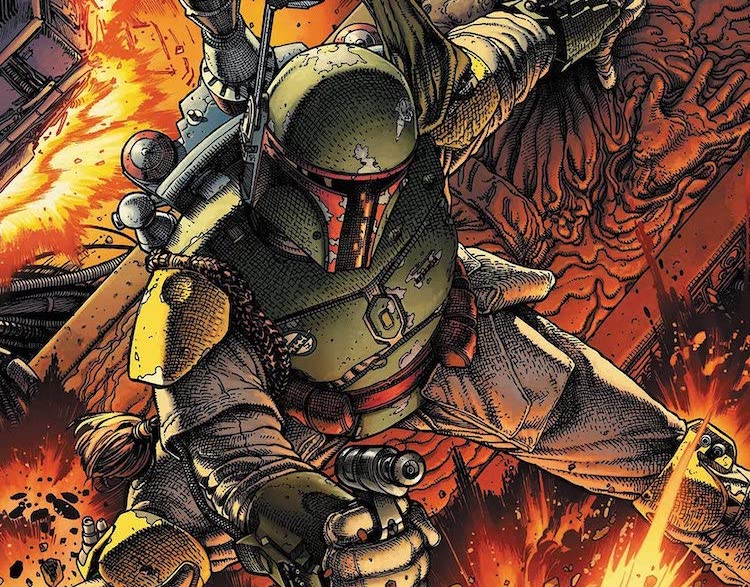 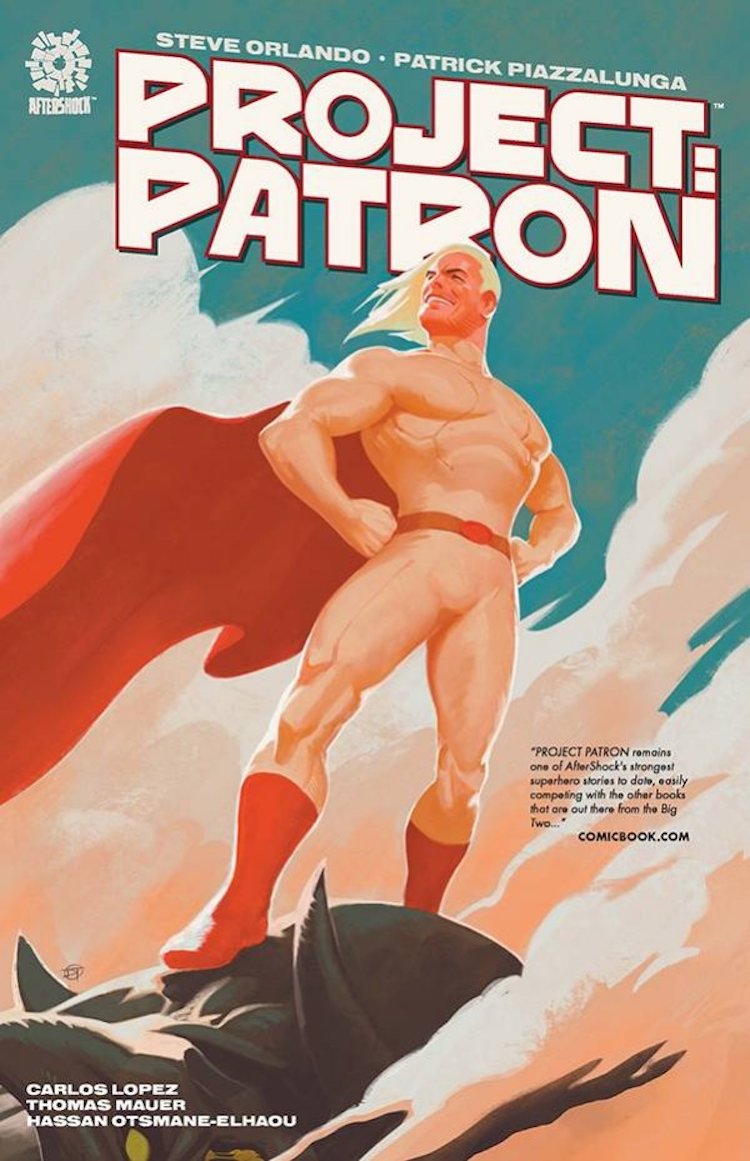 The publisher says: Thirty years ago, the world watched in horror as THE PATRON, a hero sent as humanitarian aid from a different dimension, went punch for punch with WOE, a primordial beast and a perfect match for our mighty protector. In the end, hero and villain alike fell…but the Patron returned – and continues to defend us to this day!

At least, that’s what we’ve all been told.

The truth is, the Patron died that day along with Woe. The UN replaced the Patron with a Reploid, designed to mimic the real Patron and continue on his mission of protection.

Today, the Patron Reploid is secretly piloted by an elite team – a team prepared for anything… except for the death of one of their own.

A deep dive into the underside of the superhero mythos as only writer Steve Orlando (KILL A MAN, Midnighter, Martian Manhunter) can tell it. Illustrated by Patrick Piazzalunga (Siege, X-Factor), this volume contains issues #1-5 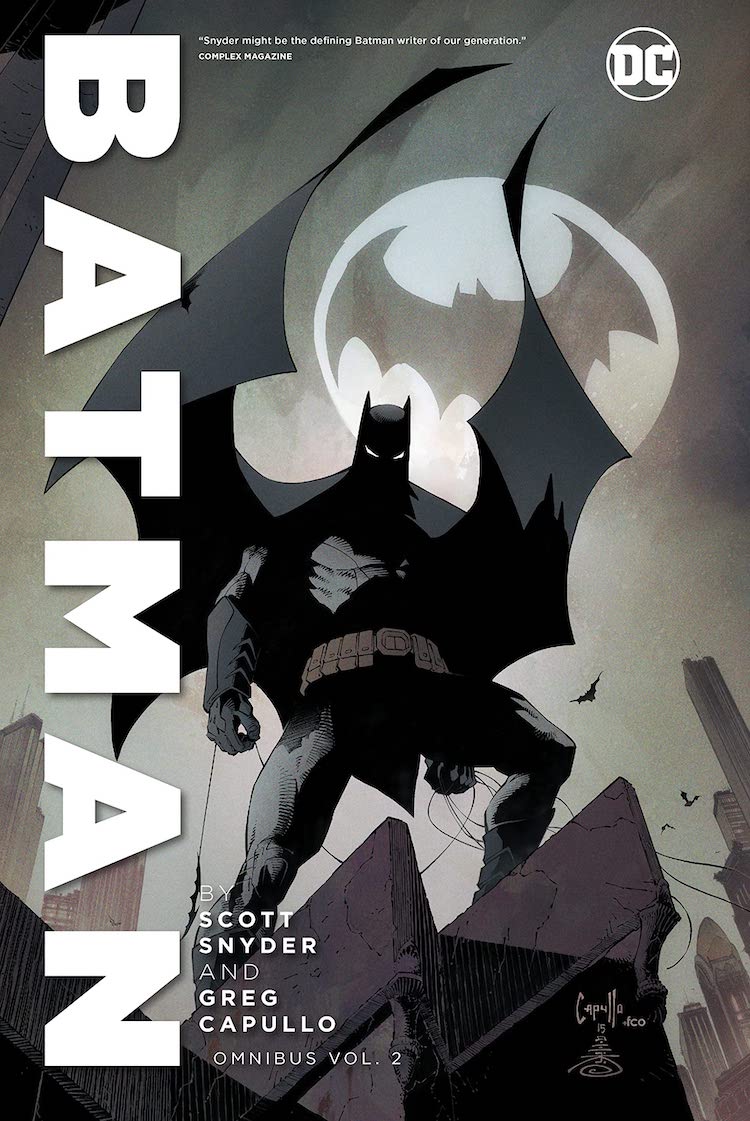 What I say: There’s a reason why this collaboration is getting the omnibus treatment. It is because the work was character defining and entertaining as all hell. This tome clocks in at 928 pages and this is the way people should read Batman. 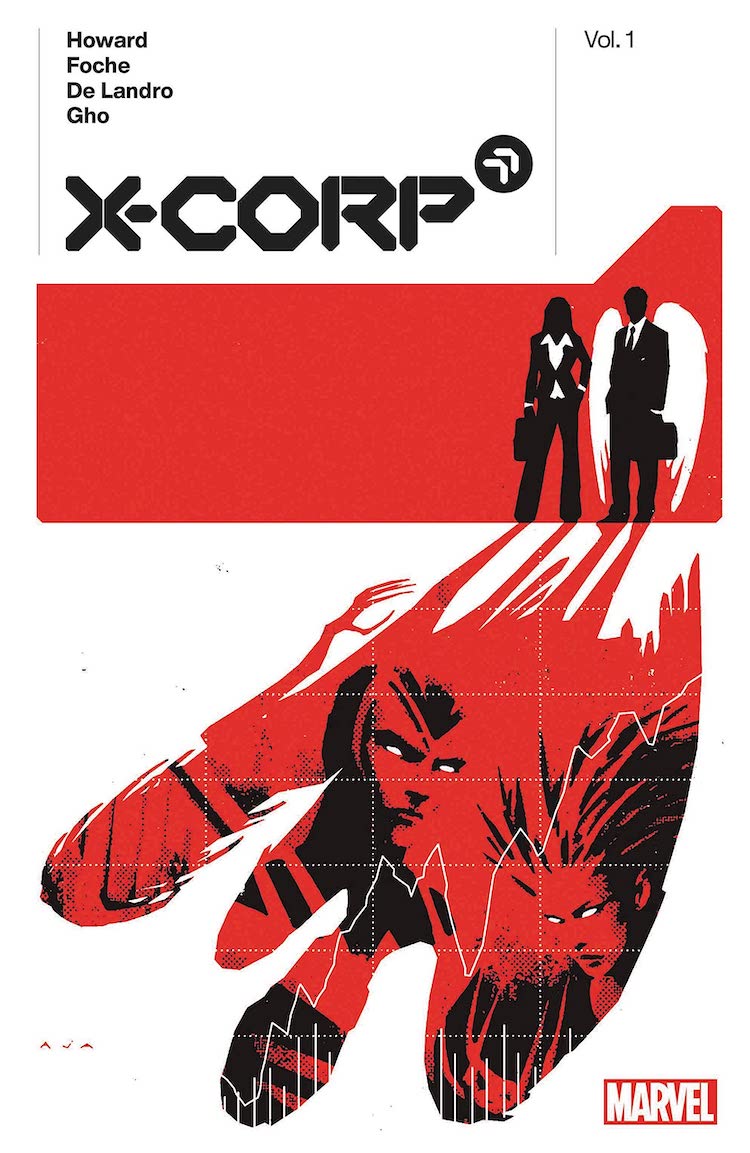 The publisher says: Krakoa is for closers!

The deals have been made. Mutantkind is safe on its new island nation. But who safeguards the interests of the mutants who have everything? Leading the charge is X-Corporation, headed by CXOs Monet St. Croix and Warren Worthington—a duo as cutthroat and ruthless in the boardroom as they are on the battlefield. But X-Corp needs more than just its figureheads.

And as Monet sets out to staff their team with some of the brightest mutant minds available—including Dr. Jamie Madrox, who provides maximum synergy with minimal bandwidth—new investors come calling, including Selene and Mastermind! But as business deals begin to bear unexpected fruit, Warren finds himself in a tense meeting with one of Krakoa’s first allies, who wants to know the truth: On Angel’s wings, will X-Corp crash or soar?

What I say: Tini Howard’s work has been some of the strongest of the current era of X-Men and X-Corp is no exception. Bringing the world of the boardroom to Krakoa is aces in my books, and Howard doing so with Foche and De Landro is just icing on the cake. 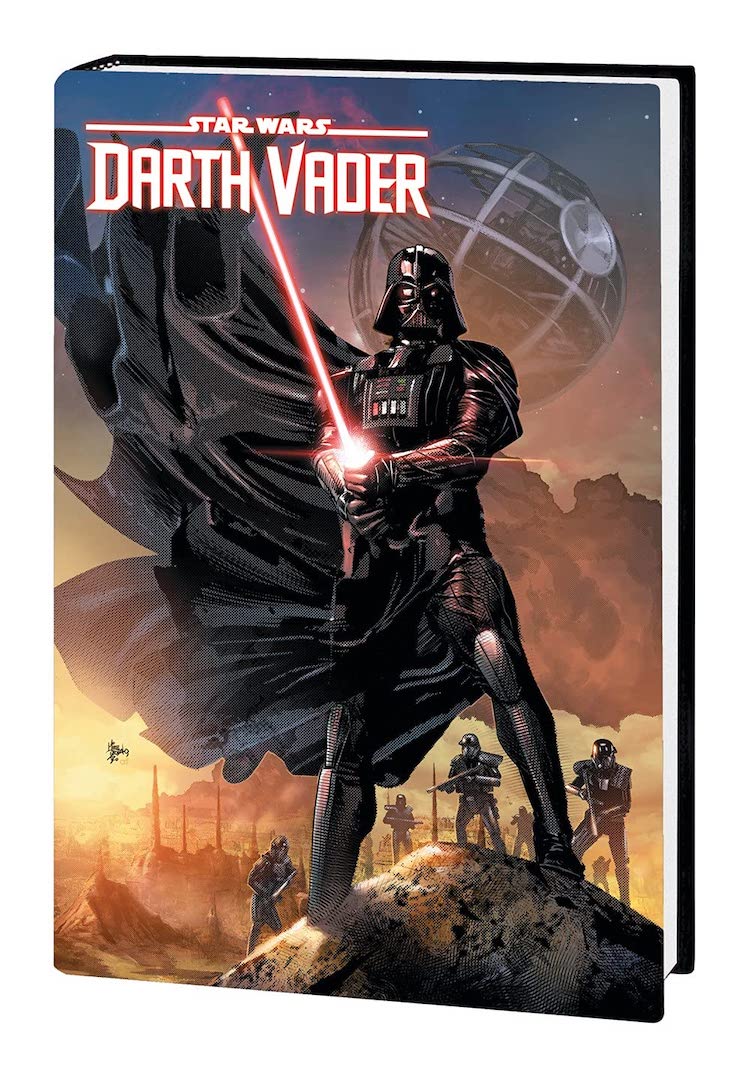 In the wake of Revenge of the Sith, follow Vader as he ascends to power as a Dark Lord of the Sith! Having lost everything dear to him and now more machine than man, Vader takes his first steps into a darker world — beginning by eradicating the galaxy’s remaining Jedi! But librarian Jocasta Nu is making a desperate effort to preserve the Jedi legacy, and the stirrings of a rebellion have begun in the Mon Cala system! To ensure the Emperor’s grip on the galaxy is absolute, Vader must deal swiftly and brutally with any uprisings — but he has a goal of his own. And as darkness rises above Mustafar, the scene of Vader’s greatest defeat, will the man once called Anakin Skywalker realize his true destiny?

What I say: Charles Soule has a gift for plumbing the Star Wars universe for gems of stories, and his run on Darth Vader is a shining example of this. One of the architects of The High Republic, Soule takes readers to the post-Revenge of the Sith era and gives us a Vader the galaxy did not see coming. 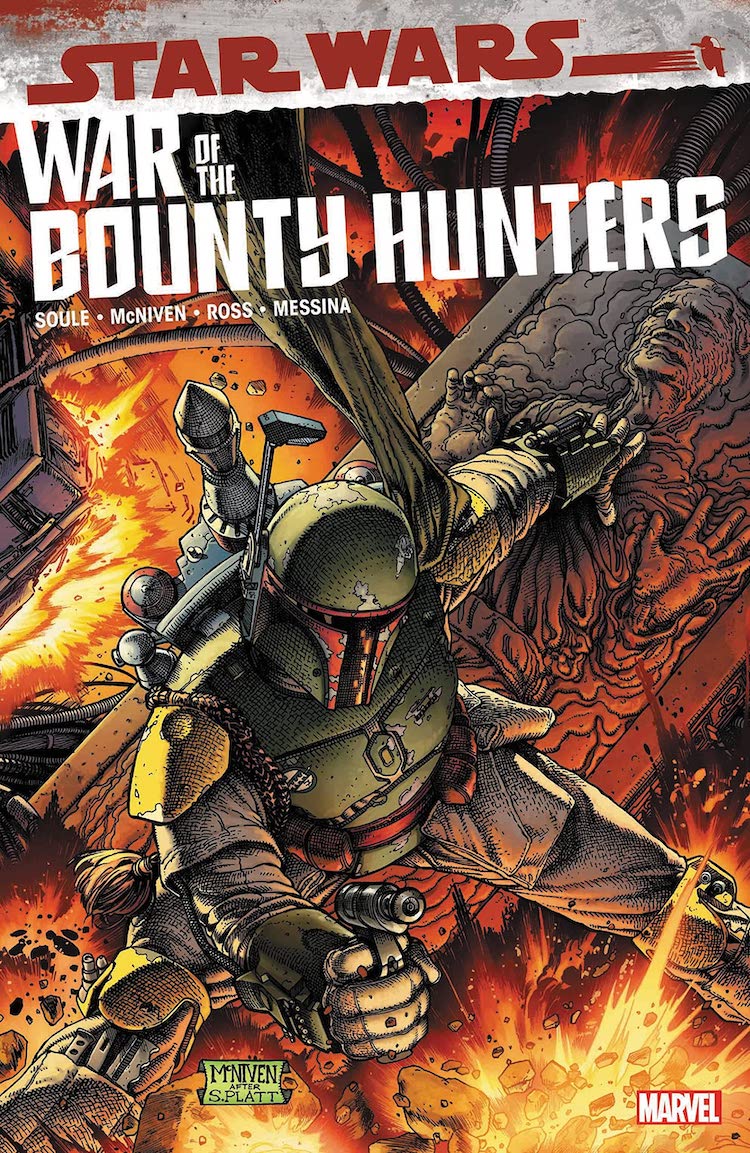 The publisher says: The Star Wars comic event you’ve been waiting for! The notorious bounty hunter Boba Fett has finally landed his greatest prize — Han Solo, frozen in carbonite for easy transport. Fett will bring the smuggler to Tatooine to collect the massive bounty placed on Solo’s head by the fearsome crime lord Jabba the Hutt. There’s just one problem standing between Fett and the payday…and it’s a big one. But Fett will stop at nothing to get the job done! Prepare for a mind-blowing, space-shattering epic event like no other! Featuring the return of the criminal Crimson Dawn, plus Darth Vader, Luke Skywalker, Leia Organa, Valance, Doctor Aphra and the Hutts, all vying for the ultimate prize — with Boba Fett stuck in the middle!

What I say: Remember that Charles Soule guy I mentioned a second ago? Well, here’s entry #2 in the “Charles Soule writes a mean Star Wars story” edition of Trade Waiting. Darth Vader was the subject above, but now Soule gets us into the thick of Boba Fett and the War of the Bounty Hunters! 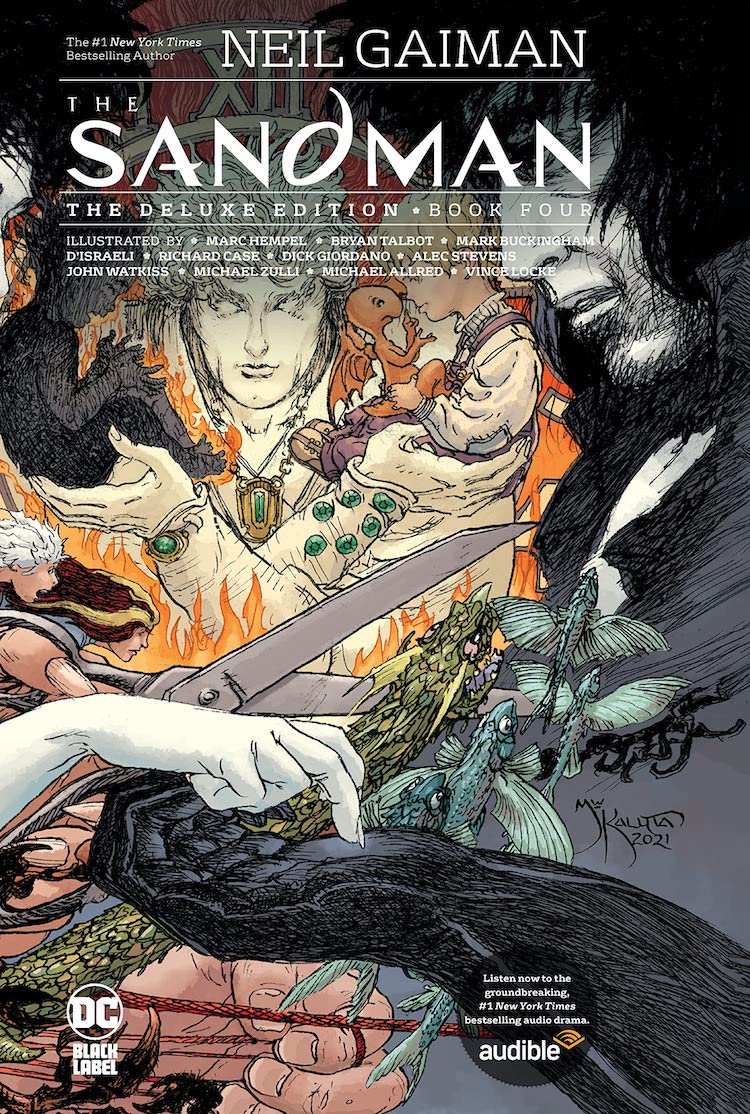 The publisher says: One of the most popular and critically acclaimed graphic novels of all time, Neil Gaiman’s awardwinning masterpiece The Sandman set the standard for mature, lyrical fantasy in the modern comics era. Illustrated by an exemplary selection of the medium’s most gifted artists, the series is a rich blend of modern and ancient mythology in which contemporary fiction, historical drama, and legend are seamlessly interwoven.

The Sandman: The Deluxe Edition Book Four collects issues #51-69 of the original run of The Sandman, which includes the zero-hour tale “World’s End”—at the World’s End Tavern, two travelers tell stories like “A Tale of Two Cities”. This volume also features Vertigo Jam #1, where the beauty and wonder of Dream’s Castle is able to be experienced.

What I say: Now, this might not be the place to start reading this series, but if you know a fan who wants to read it in the prettiest way available yet, this 528 page chunker is the way to do it! As far as these deluxe editions/omnibuses go, 50 bucks is damn good value!