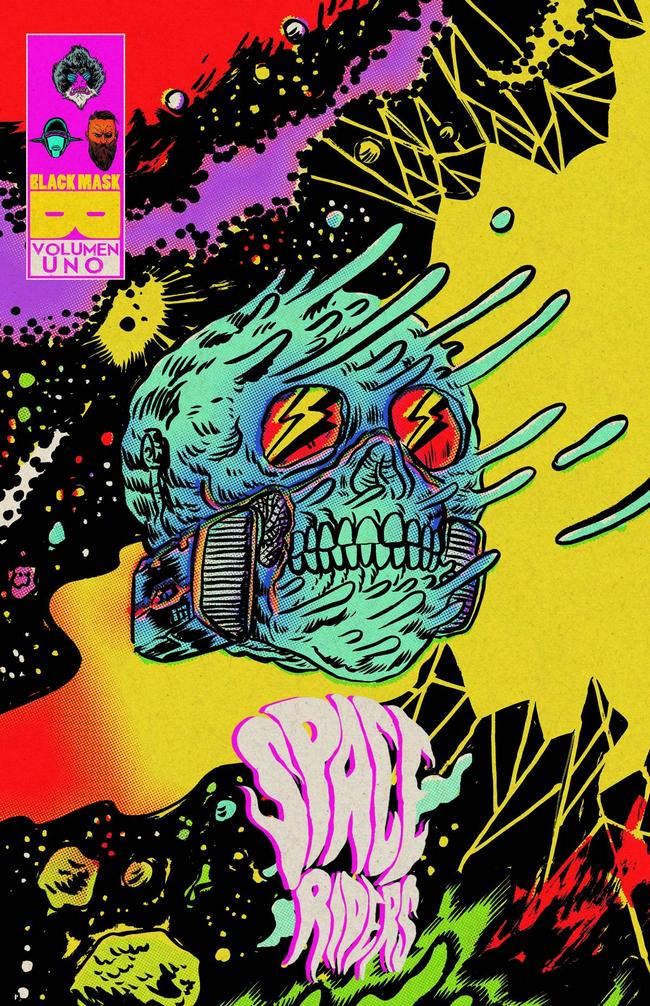 From the galactic core to the outer quadrants, one name strikes terror in the hearts of evil beings everywhere: The Space Riders! Sailing the cosmos in the Skullship Santa Muerte, Capitan Peligro and his fearless crew deal harsh justice to the scum of the galaxy while searching for the hidden truths of the universe! Collecting the four sold out issues of the psychedelic revenge tale from the minds of Alexis Ziritt and Fabian Rangel, Jr!

WHY TO WATCH FOR IT: Space Riders has easily been one of the most stylish and ambitious comics that was released this year. Artist Alexis Ziritt takes you on psychadelic adventure that defies incomprehensibility in the best way possible. Meanwhile, writer Fabian Rangel provides some of the edgiest and coolest dialogue for this motley crew of miscreants this side of the star system. His ability to sprinkle just the right amount of camp in to make you smile and cheer at the same time your eyes are melting from Ziritt’s incredible art. 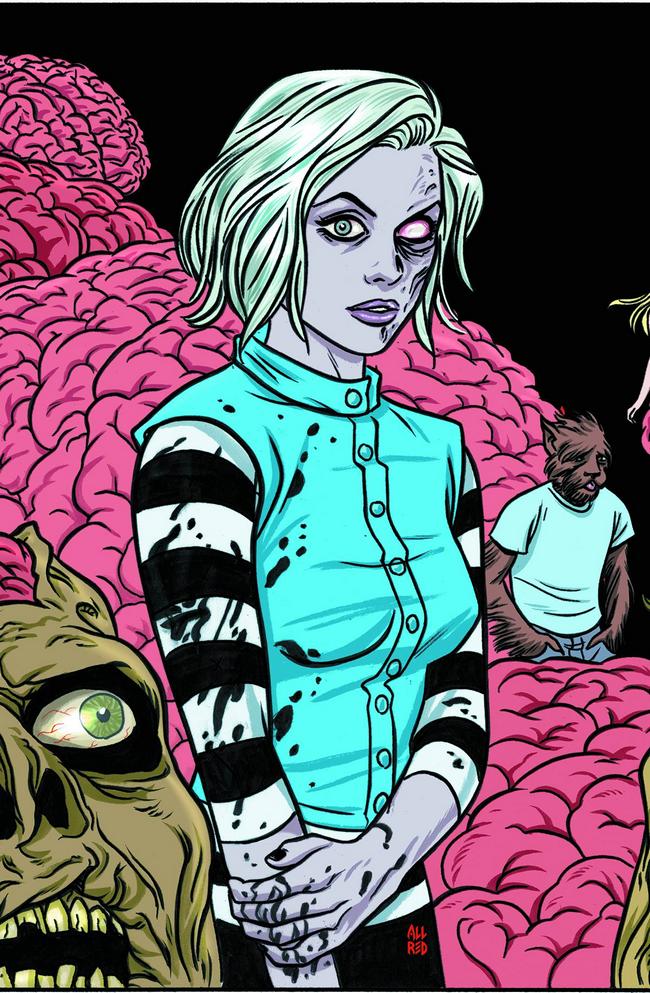 The entire 28-issue run of iZOMBIE, the comic that inspired the hit series on the CW, is collected in this new hardcover! Meet Gwen Dylan, a 20-something gravedigger in an eco-friendly cemetery-who also happens to be a zombie! Once a month she must eat a human brain to keep from losing her own memories, but in the process she becomes consumed with the thoughts and personality of the dead person-until she eats her next brain. Our zombie girl detective is joined by her best friend, Eleanor, a swinging ’60s ghost, plus a posse of paintball-blasting vampires, a smitten were-dog and a hot but demented mummy. This collection features a new wraparound cover by superstar artist Michael Allred!

WHY TO WATCH FOR IT: If you’re a fan of the hit TV show and was curious about the comic book series that precedes it –here it is! Be forewarned that the TV series isn’t 100% faithful to Chris Roberson and Michael Allred’s creation, but it does sustain it’s humor and spirit. For myself, the art alone presented in this book is worth the ticket of admission, but an omnibus that collects all 28 issues of the series and features a new Allred, wraparound cover seals the deal. 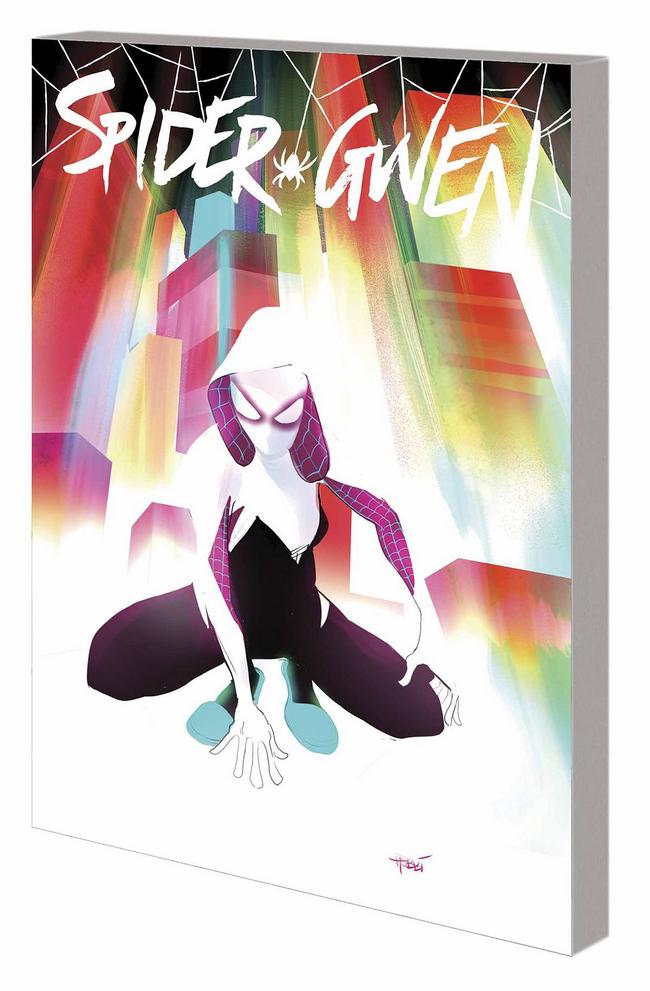 The breakout character hit of the year is Gwen Stacy: Spider-Woman! In one universe, it wasn’t Peter Parker who was bitten by the radioactive spider, but Gwen Stacy! She’s smart, charming and can lift a car – just don’t tell her father the police chief! And now, in the wake of Spider-Verse, Gwen swings into her own solo adventures! And she soon finds herself between a rock and a hard place when the Vulture attacks, and NYPD Lieutenant Frank Castle sets his sights on bringing her down. Then, still haunted by Peter’s death, Gwen visits his only family: Ben and May Parker. But what really happened the day Peter died? Find out right here as the spectacular Spider-Gwen steals not only the spotlight, but also the hearts of comic fans worldwide! Collecting EDGE OF SPIDER-VERSE #2 and SPIDER-GWEN #1-5.
Rated T+

WHY TO WATCH FOR IT: If you’re wondering what all the buzz has been about in regards to Marvel’s latest breakout character, look no further than here. What started as an offshoot side story to the Spider-Verse event, Jason Latour and Robbi Rodriguez’s rendition of a Gwen Stacy/Peter Parker role-reversal not only gained attention its youthful perspective and dynamic visuals, but it also created a rebellious music soundtrack. Everything you need to know about Spider-Gwen starts here and is a great collection for the curious ones that have been living under a rock. 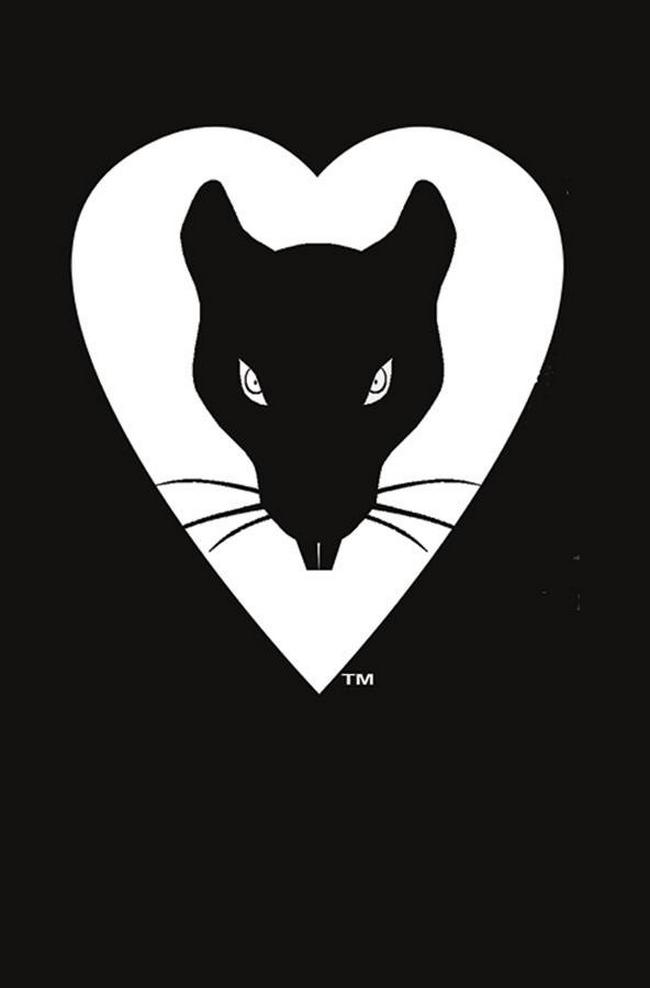 Collects RAT QUEENS #1-10 plus the never-before reprinted RAT QUEENS SPECIAL: BRAGA #1 plus extras all in an over-sized hardcover with a SILVER-FOIL stamped cover! A collector’s dream package just in time for Christmas!

WHY TO WATCH FOR IT: In spite of the controversy and taboo surrounding this series, Rat Queens is one of my favorite comic book series. This collected edition is drool-worthy in it’s appearance and is a must-have for fans. The vulgarity, violence, and humor is ever abundant and can make a great gift to anyone interested in a hilarious rendition of female, fantasy warrior kicking ass and taking names. 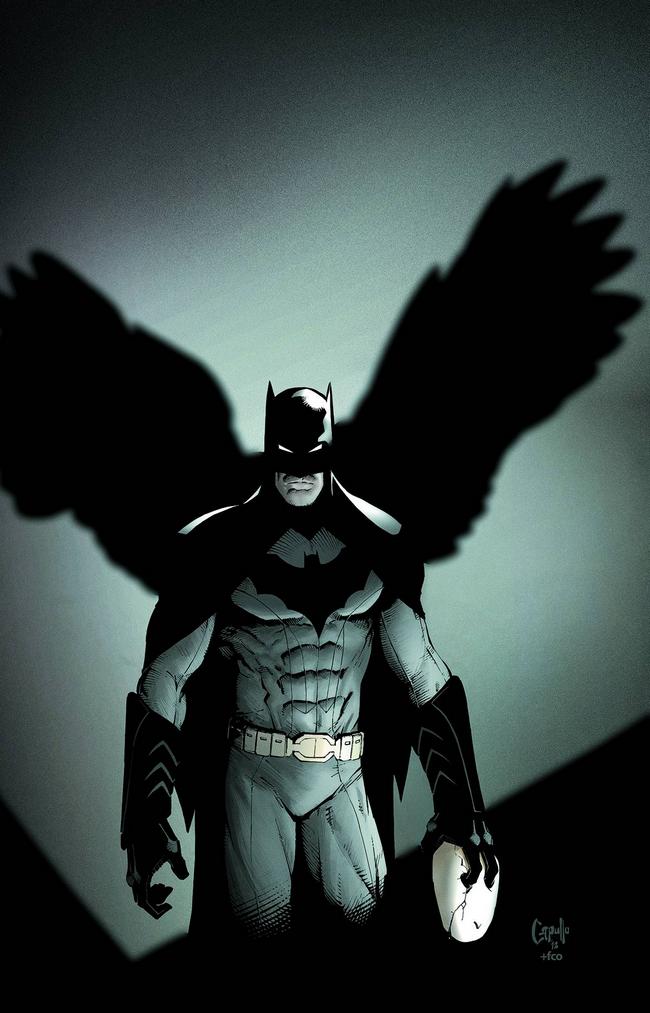 The explosive “Court of Owls” storyline gets the Absolute Edition treatment, collecting BATMAN #1-11! It all begins when a series of brutal murders rocks not only Gotham City to its core but also the Caped Crusader himself when the prime suspect is one of Batman’s closest allies – Dick Grayson! After a series of deadly discoveries, Bruce Wayne has learned that the Court of Owls is real – and a deadly threat out to control Gotham City!

WHY TO WATCH FOR IT: In my opinion, this remains to be the defining event series to ever become eschewed out of DC’s “new52”. Scott Snyder and Greg Capullo operate from one of the highest tiers of storytelling that not only challenges Batman to his utmost limit, but also adds to the mythos of him and Gotham in a very significant manner. There are still many other stories that have yet to be told from this arc, but it starts here. The price point is high for just a #1-11 collection with some bonuses, but “Absolute” editions are larger than traditional collected sizes and Capullo’s art lends itself well to the larger format. 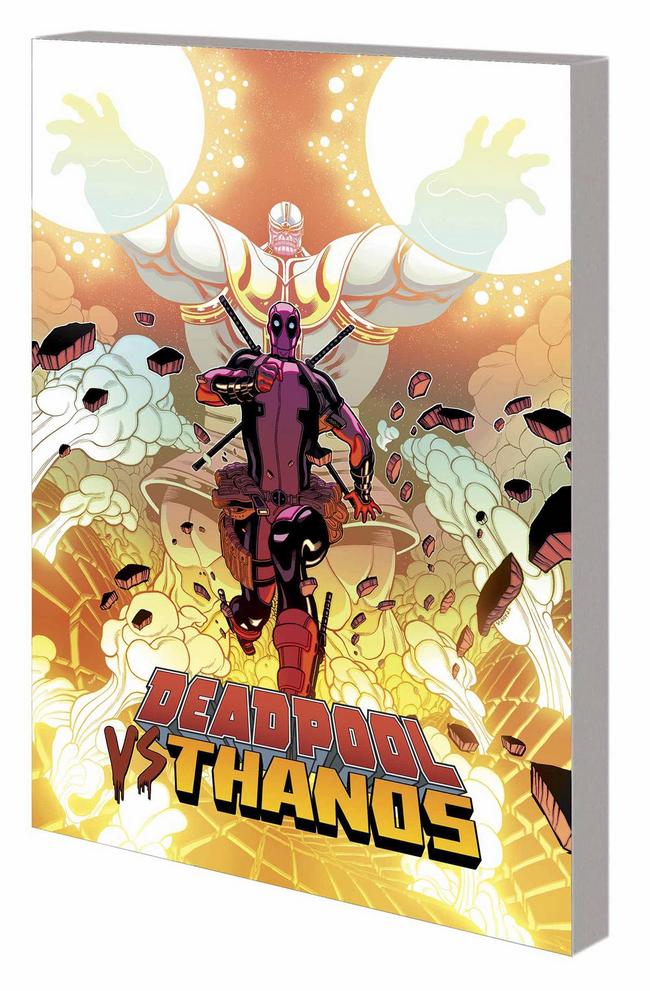 It’s the confrontation that every single Marvel comic has been building to: the Merc With a Mouth versus the Jerk With That Jaw! Deadpool goes to Infinity and beyond when he throws down the gauntlet against Thanos of Titan! These calamitous combatants are two sides of an unholy love triangle, with Death their fickle mistress. But when everything in the universe stops dying, could the bombshell with the killer cheekbones have her bony hands full with someone else?!? Who ever heard of a love square? How would that even work? The Mad Titan and the Crazy Cretin may just have to team up to find out what gives as they head “From Her to Eternity!” Guest-starring Marvel’s most popular and beloved character, the Black Talon – plus some nobodies called the Guardians of the Galaxy. Collecting DEADPOOL VS. THANOS #1-4.
Parental Advisory

WHY TO WATCH FOR IT: I’m not the biggest fan of “Merc With a Mouth”, but I’d be hard-pressed not to admit my jovial interest in knowing what the encounter would be like if Deadpool and Thanos were to face off. Curiosity and a beautiful Tradd Moore cover got my interest, but with Tim Seeley crafting this far-fetched story seems like the most capable of hands to be in. Regardless of my exhaustion for Wade Wilson and his legion of fans, this is still worth looking at.