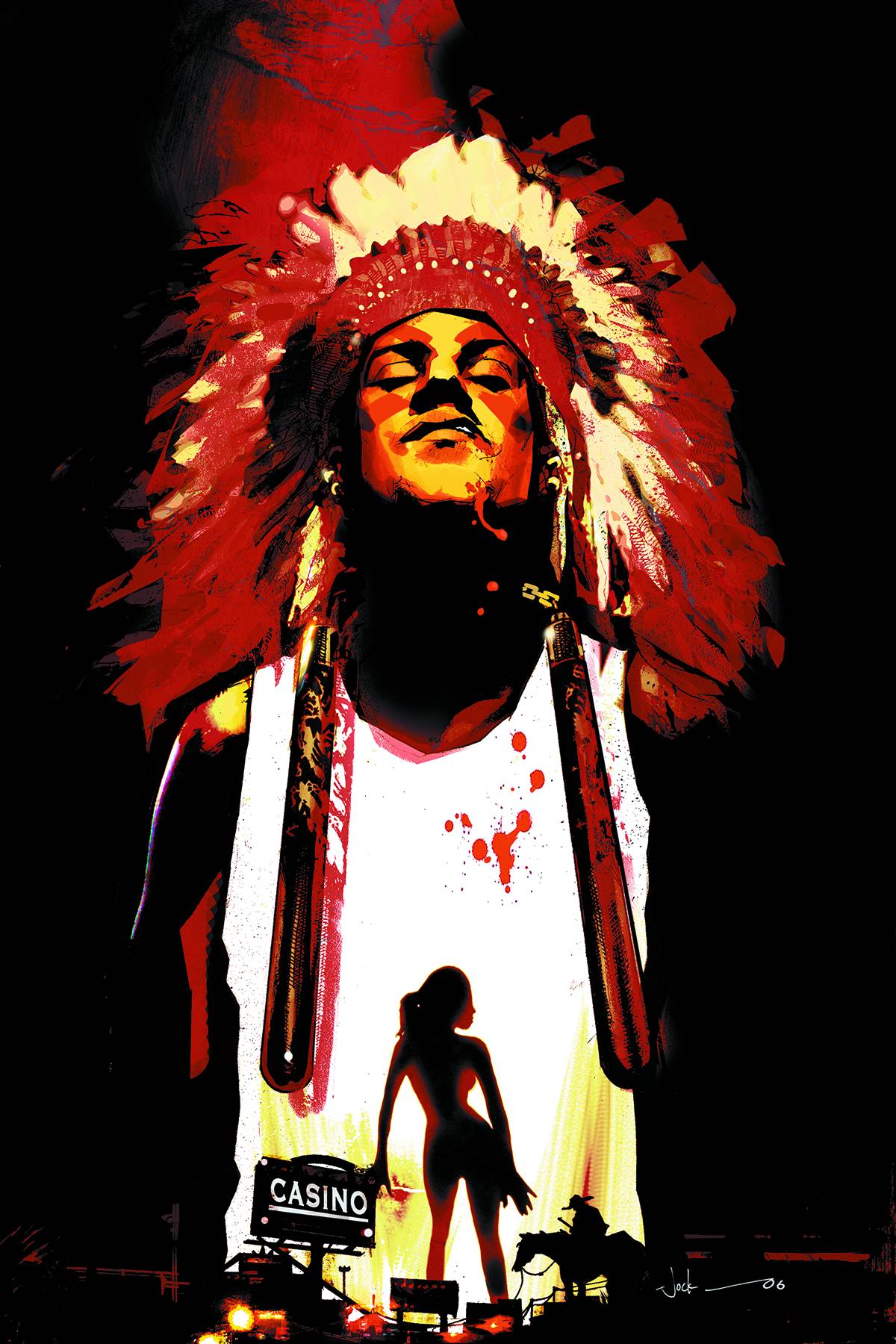 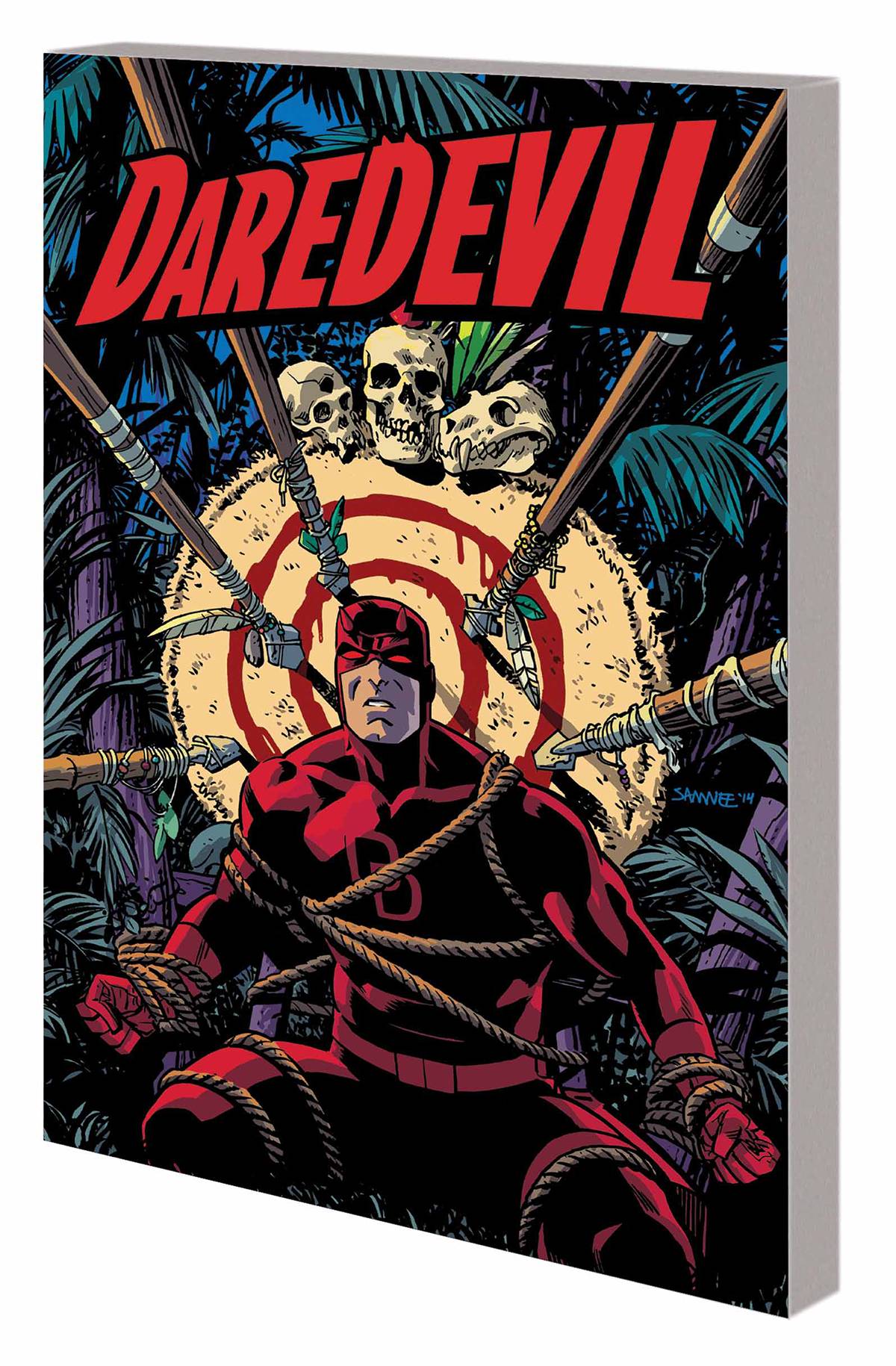 ORIGINAL SIN tie-in! When Matt learns something about his past that’s too terrible to accept, he seeks out his mother – only to find her in more trouble than he could possibly have imagined. Prepare for the untold story of how Matt Murdock’s mother became Sister Maggie as her biggest sin is finally revealed! Then, Daredevil takes on a new case with a killer opposition – and faces the Purple Children! One of DD’s oldest foes has unleashed a force that he can’t fight without being swallowed by his darkest moods and thoughts. As the Purple Children steal everything Matt Murdock has achieved for himself, is this the beginning of a new, grim chapter in Daredevil’s life? Plus: Celebrate Daredevil’s fiftieth anniversary with a look at the future! Collecting DAREDEVIL (2014) #1.50 and #6-10.
Rated T+

WHY TO WATCH FOR IT: The creative team behind Daredevil’s latest incarnation has been far and away, some of the most innovative and most exciting stuff we have seen come from ol’ horn head. With that said, Mark Waid, Chris Samnee, and Javier Rodriguez have been able to craft much of that same fun and excitement and perfectly balance it with a genuine amount of gravitas and honesty as the Man Without Fear tackles issues that he can’t just punch his way out of. 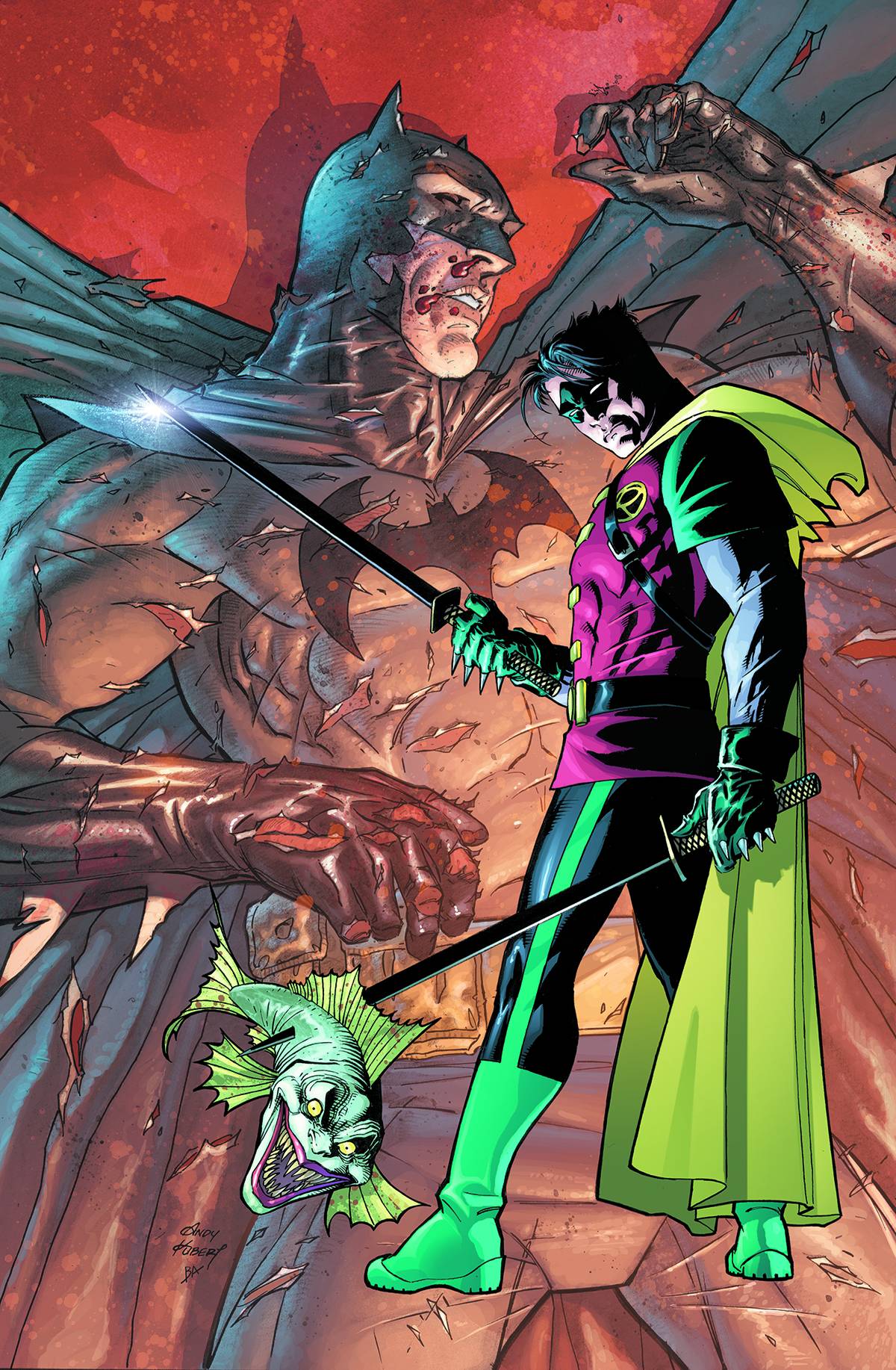 Damian Wayne, the son of Batman, has adopted the cape and cowl as his own…but what horrific events set this troubled hero on the path of his dark destiny? It’s a possible future that may never be in this epic written and drawn by Andy Kubert! Plus, in a tale written by Grant Morrison, Damian Wayne is the Batman of Tomorrow in a story set 15 years from now in a nightmarish future Gotham City! Collecting DAMIAN: SON OF BATMAN #1-4 and BATMAN #666.

WHY TO WATCH FOR IT: Damian’s back and if you can’t get enough of him, here’s an alternate storyline that really showcases the poignancy of Andy Kubert’s art and abilities. There’s also a story from Damian’s creator, writer Grant Morrison, which is sure to get you thinking about what kind of man Damian could end up becoming. 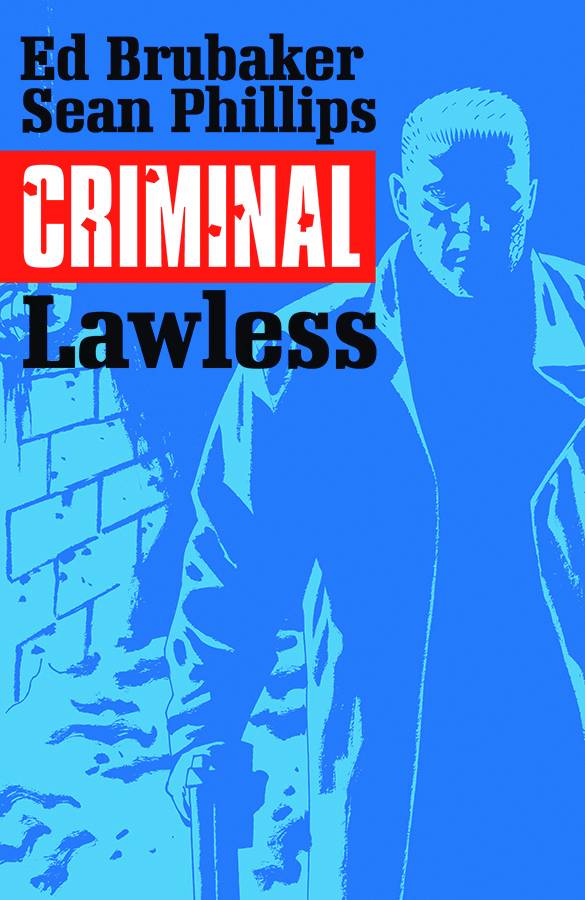 THE BEST-SELLING CRIME SERIES CONTINUES IN THIS STRIKINGLY-DESIGNED NEW EDITION FROM IMAGE!

LAWLESS: A story of brotherly love and hate, as Tracy Lawless finally returns home to find out who murdered his kid brother, and how much their family history has doomed them both. This is where BRUBAKER and PHILLIPS take the world they created in CRIMINAL, VOL. 1 and begin stretching the boundaries of what crime comics can be.

WHY TO WATCH FOR IT: Image has been so kind enough to capitalize on the success of this creative team by designing new editions from one of their most acclaimed series. This is pulpy, crime comics at its best and Brubaker and Phillips have proven it with this series.

The first eleven issues of the acclaimed series are collected in hardcover for the first time! Dashiell Bad Horse has come home to the reservation armed with a set of nunchucks, a hell-bent-for-leather attitude and a dark secret. But nothing has changed – except for the glimmering new casino, and a once-proud people overcome by drugs and organized crime. Includes sketch material by artist R.M. Guera.

WHY TO WATCH FOR IT: Writer Jason Aaron has been gaining in popularity and with this series being optioned for a television show, it’s about time for tertiarty fans to introduce themselves to one of Aaron’s best work. With gorgeous art by R.M. Guera and a compelling story that delves into a sociopolitical subculture, it’s an easy buy. 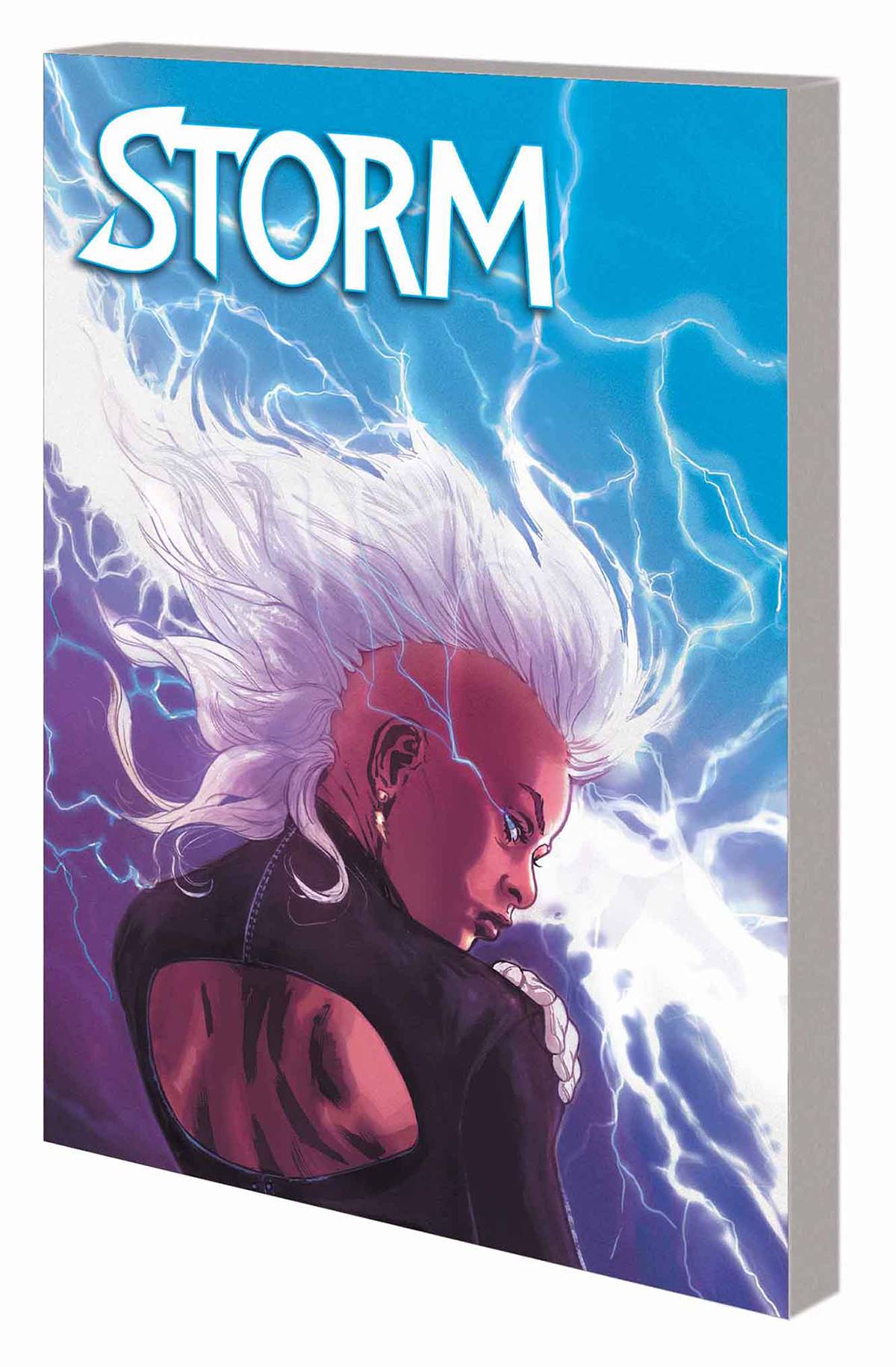 Thief. Goddess. Headmistress. Queen. The X-Man called Storm has always defied a single title. And her desire to better the world has never been limited to only her own kind. On an ongoing mission to foster goodwill, and safeguard both mankind and mutants, Ororo Munroe will travel the globe – confronting villains, gods, monsters and everything in between. She will overthrow tyrants, quell tsunamis and strive to see her dream for the world realized. She is Storm, a hero like no other – and the skies will tremble at the sight of their namesake. But now, Storm must handle the fallout caused by familiar faces from her past. Why is Callisto kidnapping wayward youths from the streets of New York? Will Storm’s romance with Forge be reignited? And can Yukio help Storm deal with the death of Wolverine? Collecting STORM (2014) #1-5.
Rated T+

WHY TO WATCH FOR IT: Easily one of the coolest and strongest mutants ever to don an X, Storm finally has a solo series that dives deeper into her troubled state of affairs. Writer Greg Pak has an honest love for the weather-controlling woman, and it is a great jumping on point for fans new and old.