Mwuh-ha-ha-ha! I have deposed Editor-in-Chief Aaron Long (he might or might not be tied down to a train track as you read this.) and taken over TRADE WAITING for this week. Check out the five hottest collected editions being released on January 16, 2013, while I continue to gleefully twirl my moustache: 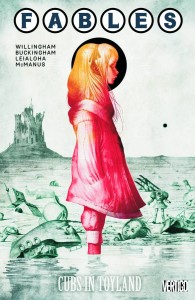 In these tales from FABLES #114-121, a harrowing epic starts when Snow and Bigby’s cub Therese receives a Christmas gift from an unknown admirer. This red plastic boat may hold the key to a deep, disturbing secret that will incite a series of soul-crushing events for the denizens of Fabletown. Plus, don’t miss Bufkin’s (mis)adventures in Oz.

Why To Watch For It: Few creator-owned series have achieved the kind of success Bill Willingham has with his take on the classic fairy tales of our youth. The crown jewel of DC’s Vertigo line, Fables continues to impress month in and month out. If you’ve fallen behind, or just want to jump into some of the best characters and action on the stands, this volume is for you. 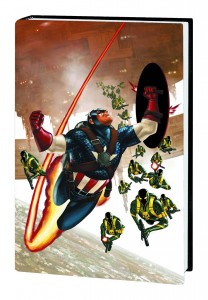 Still reeling from Hydra’s Madbombs, Cap finds himself the target of a vicious media smear campaign. Who are the Discordians, and what will they blow up next? While Discordian cells attack American interests all worldwide, shock journalist Reed Braxton turns the public against the Sentinel of Liberty. And as riots beak out in the streets and society begins to crumble, the Omega-Madbombs are unleashed! Targeted for death, Cap tackles Codename: Bravo and Queen Hydra with the fate of the world in the balance! Meanwhile, Sharon Carter and Dum Dum Dugan duke it out with Baron Zemo – in the depths of space! It’s the end of an era, brought to you by Eisner Award-winner Ed Brubaker and rising star Cullen Bunn! Collecting CAPTAIN AMERICA (2011) #15-19.

Why To Watch For It: Ed Brubaker’s days on corporate-owned super-heroes may be behind him for now, but his genius take on the Super Soldier lives on in beautiful hardcover. The last of his run to be collected, volume 4 is guaranteed comic market gold. And wrapping up with a story Comicosity gave a 10/10 review to makes this edition particularly one to watch out for. 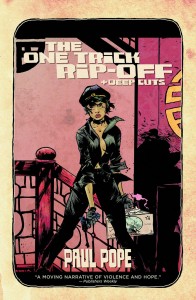 Young lovers Tubby and Vim want to escape – escape the mistakes they’ve made, the lives they’ve lived, and the dirty city weighing them down. Their plan is simple -all they have to do is rip-off Tubby’s pals, the One Tricks – the toughest street gang in LA.
If they pull it off, they’re set for life. If not, their lives won’t matter much anyway.
What was going to be a smooth, straight-forward heist becomes a fast-paced battle to the death.
From Eisner Award-winning writer/artist PAUL POPE (Batman: Year 100, THB, Heavy Liquid, 100%) and presented for the first time in color by JAMIE GRANT (All-Star Superman).  ONE TRICK RIP-OFF/DEEP-CUTS is 288 pages of raw power, of which over 150 pages are comprised of new, rare, and never before seen stories created during POPE’s time traveling the world in the ’90s.
Included in the “Deep Cuts” section is a bounty of unpublished and rare work POPE did in the ’90s, including the legendary “Supertrouble” manga, created for Kodansha in Japan, appearing here in print for the first time. It’s a tour de force of pure, kinetic storytelling that will keep your eyes peeled until the very last page.

Why To Watch For It: Paul Pope is one of the most influential comic book writer/artists of the last twenty years and this volume puts together material most collectors and fans have never had a chance to see. Sounds like a great deal to me! 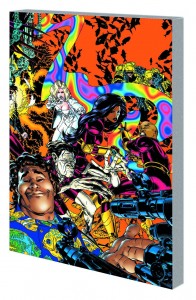 Class is back in session as Generation X returns! First, a recruiting trip to Manhattan turns fatal when the Morlock terrorists Gene Nation target Emma Frost! Then, when Banshee’s ancestral castle vanishes, the students take a field trip that begins in Ireland – and ends somewhere very different! And the school gains a new student in the laid-back Mondo, but what does the new Hellfire Club want with him? And what does Emma’s long-lost sister have to do with its plan? The Gen X kids barely have time to welcome Mondo into the fold before they’re targeted by Omega Red – but what secret tie does the vicious villain have to Banshee’s past? Pay attention, Gen X – you never know when there’ll be a quiz! Collecting GENERATION X #5-11 and ANNUAL ’95, and GENERATION X SAN DIEGO PREVIEW.

Why To Watch For It: Long before he took on the Teen Titans, Scott Lobdell was deep into writing kids in costumes with Generation X, Marvel’s second generation of New Mutants from the 1990s. With insanely beautiful art by Chris Bachalo, these old school reprints take me back to the days when there were a kabillion X-books and so many mutants… oh wait. 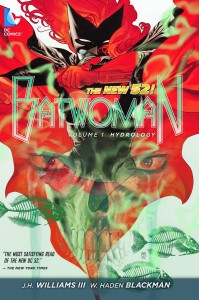 Collecting issues #0-5 of the DC Comics – The New 52 series! Who or what is stealing children from the barrio, and for what vile purpose? Will Kate train her cousin, Bette Kane (a.k.a. Flamebird) to join her battle against crime? And why is a government agency suddenly taking an interest in her?