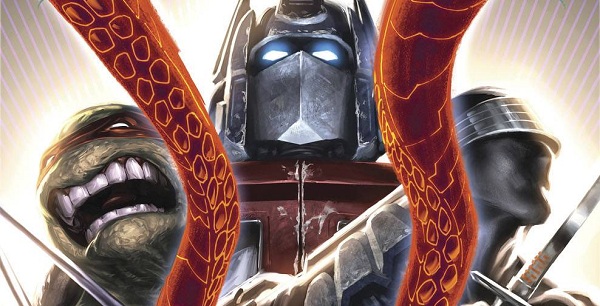 Welcome to another edition of Trade Waiting, this time showcasing the top 5 collections being released on November 28, 2012. Check out books from Marvel, Oni Press, BOOM! Studios and IDW Publishing below, and sound off on your top 5 in the comments section! 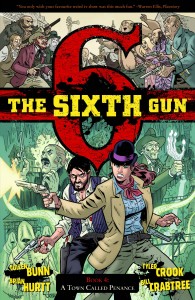 The Six. A set of cursed pistols with the power to reshape the world. The Knights of Solomon will stop at nothing to
possess this power. Captured, isolated, and tortured, Drake Sinclair is offered a choice: join the Knights’ quest…
or die. Meanwhile, Becky Montcrief’s search for Drake brings her to the town of Penance – a mysterious place
populated by a host of twisted townsfolk. All the while, the Sixth Gun schemes, and the secrets it holds will shake
the very foundations of reality.

Why to watch for it: If you aren’t reading The Sixth Gun, start. This is one of the strongest indie series in comics,
and Cullen Bunn and Brian Hurtt are only getting better as the story progresses. Perfect for fans who like, well,
comics…especially fans of sci-fi, westerns, and adventure books. 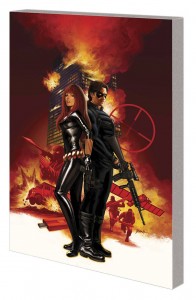 Writer Ed Brubaker reunites with DAREDEVIL collaborator Michael Lark! Winter Soldier finds himself on a twisted trail
from coast to coast and past to present, chasing the insane man who will become his worst enemy: a villain who knows
Bucky is still alive. Old enemies resurface with new codenames, and Winter Soldier and Black Widow’s hunt gets
personal in the aftermath of a tragic and savage murder. Can Bucky save the Widow from her past? And what happens if
he can’t?
Collecting WINTER SOLDIER #6-9.

Why to watch for it: Ed Brubaker is at his absolute best writing spy stories with the Winter Soldier and this
collection sees him reunited with Daredevil & Gotham Central artist Michael Lark. 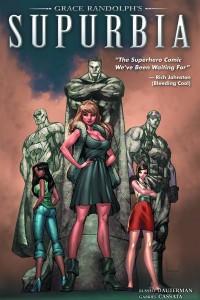 What goes down when the capes come off? Meet the “Real Housewives” of Earth’s greatest super-team, the Meta Legion! It’s the egos, the tantrums, and the betrayals of the super set. Find out what happens behind the masks as superhero families are faced with the sordid problems of everyday life – and then some! From rising star writer Grace Randolph (Marvel’s NATION X, HER-OES) and hot new artist Russell Dauterman, this series takes the familiar super-team and turns it on its head with a scandalous, TMZ-fueled look at what it’s like to live with a superhero!

Why to watch for it: Grace Randolph’s Supurbia volume 2 has just kicked off, and with the multiple sellouts you may have missed some of the first issues in this trade. There is no better way to bring yourself up to speed for Randolph’s ongoing series about the lives of those behind the heroes. 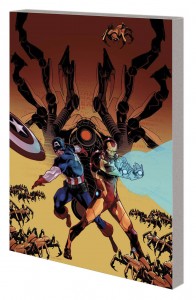 Captain America and Iron Man head to Madripoor for a technology expo! What could possibly go wrong? Everything, that’s what – especially when Batroc’s Brigade shows up, and a technological nightmare threatens to bring the world to its knees! As Cap and Tony fight their way through Madripoor in search of the villains behind the disaster, the elusive Kashmir Vennema is prepared to sell the dangerous secrets she’s stolen to the highest bidder – including A.I.M. and M.O.D.O.K. – and foremost among those secrets is complete specs on Iron Man’s armor! Plus: Captain America and Namor battle the Thule Society during WWII! As the Thule unleash the Kraken, an Atlantean weapon of ungodly power, Namor encounters a clandestine society – but are they friend or foe? Collecting CAPTAIN AMERICA AND IRON MAN #633-635 and CAPTAIN AMERICA AND NAMOR #635.1.

Why to watch for it: Captain America, Iron Man, A.I.M., M.O.D.O.K….need I say more? Add in that it is by Bunn, Kitson and Conrad and you’ve got a solid superhero winner. 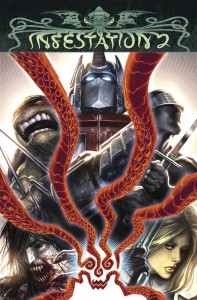 The Elder Gods of H.P. Lovecraft invade the worlds of IDW in Infestation 2! The call of Cthulhu infests 30 Days of Night, Dungeons & Dragons, G.I. JOE, Teenage Mutant Ninja Turtles, and Transformers. If zombies weren’t bad enough, how do you stop inter-dimensional monsters?

Why to watch for it: Cthulhu invades all your favourite franchises! Where else are you going to find a crossover of 30 Days of Night, D&D, G.I. JOE, Teenage Mutant Ninja Turtles and Transformers? Nowhere. That simple.