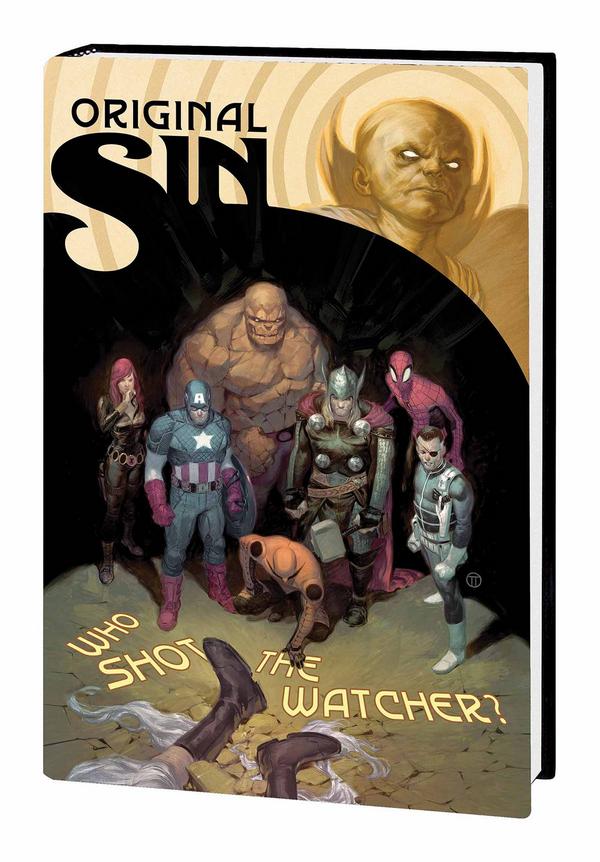 There are always a ton of good books out there. For those of you that wait for the trades, I’ll give you the best of suggestions. Not only are they must reads, but they are also series that I believe are your best option for catching up on some good stories.

Who killed the Watcher? Uatu, the mysterious space-god who observes mankind from the moon, is dead. Thus begins the greatest murder mystery in Marvel history! As Nick Fury leads a cosmic manhunt to the far corners of the universe, other forces marshal and other questions arise. Who is the Unseen? What was stolen from the Watcher’s lair? Just when the Avengers think they’ve cornered their murderer, everything explodes – unleashing the Marvel Universe’s greatest secrets and rocking the heroes to their core! What did the Watcher see? As all the truths come tumbling into the light, discover the Original Sins of dozens of major characters, from the Inhumans to Dr. Doom to J. Jonah Jameson! Collecting ORIGINAL SIN #0-8, ORIGINAL SINS #1-5 and material from POINT ONE #1.
Parental Advisory

WHY TO WATCH FOR IT: I know what you’re thinking, another Marvel event with no ties to anything significant. On some spectrum, you might be right. On the biggest spectrum, YOU’RE WRONG. This event sets the preliminary stage for the “AXIS” storyline and has some of the best coupling of heroes that you’ll ever see in a Marvel event. Regardless of it’s importance, it’s a must read for the future of the Marvel Universe. 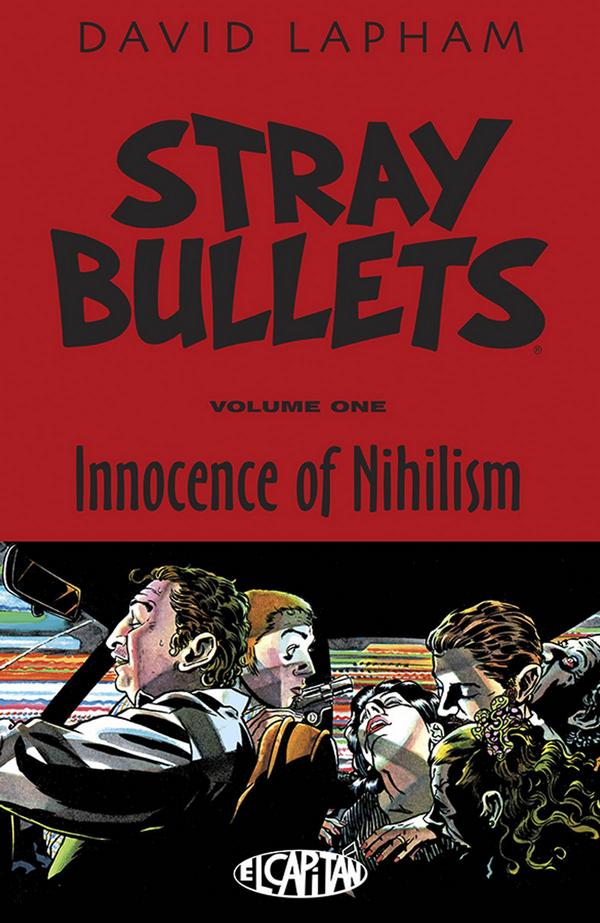 With the return of STRAY BULLETS, it’s time to roll out the “by story arc” trades of DAVID LAPHAM’s influential crime masterpiece….

These are their stories. Follow the lost lives of people who are savagely torn apart by events beyond their control. As the innocent world of an imaginative little girl is shattered when she witnesses a brutal double murder. Or an introverted young boy on the verge of manhood gets a lesson on just how far is too far when he falls for a needy woman who lives life in the fast lane. Or party with a pair of low-rent hoods who learn about what is really important in life just when they shouldn’t. And even learn the story of the most infamous gangster who ever lived, Amy Racecar, who talks to God, lunches with the President, and just may be responsible for the end of the world. These are some of the tales that will rip out your guts and break your heart.

WHY TO WATCH FOR IT: David Lapham is back with his acclaimed series Stray Bullets. While there is a hefty lexicon of backstory available to this series, Lapham makes it completely easy for new readers to jump in and enjoy this without the obligation of enriching yourselves with a multitude of backstory. (If you want to, you should.) 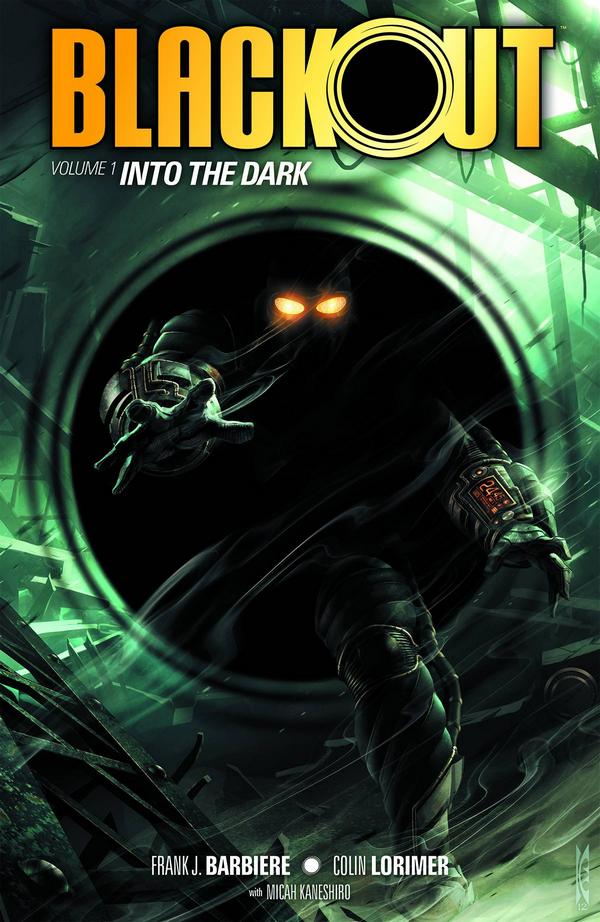 Scott Travers’s special suit lets him move through our world in a shadowy parallel dimension-but he doesn’t know how the suit works or where it came from. With his benefactor missing, and with powerful adversaries after his gear, “Blackout” must find answers before the answers find him! Collects Blackout stories from the miniseries and from Dark Horse Presents #24-#26.

WHY TO WATCH FOR IT: Writer Frank Barbiere has been making noise with his series Five Ghosts from Image Comics. Not only has it been a great series, but it’s also been optioned by the SyFy channel. Don’t let that sell-out mentality fool you, the premise of a man with a suit that can transfer through dimensions in reality at will is a strikingly interesting premise and has had this reader’s interest piqued. 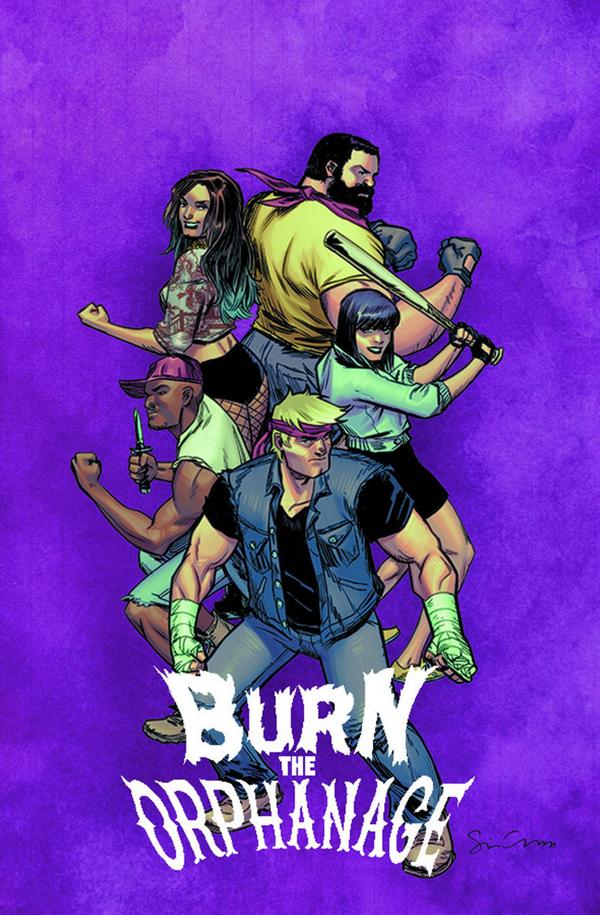 The video game send-up returns for another pulse-pounding volume! Orphan Rock returns home only to find his city under siege by the MannCorp robots…it’s up to him and him and his friends to take down the evil corporation once and for all!

WHY TO WATCH FOR IT: Looking for a series with attitude and the modern sensibility to know how to embrace it? Now couple that sentiment with every cheap B-movie from the 80’s and liberally seasoning it with the cheesy-video games of the era. That’s “Burn The Orphanage!” The saga continues in this volume that is so much fun, that you’ll explode. Literally (Not literally) 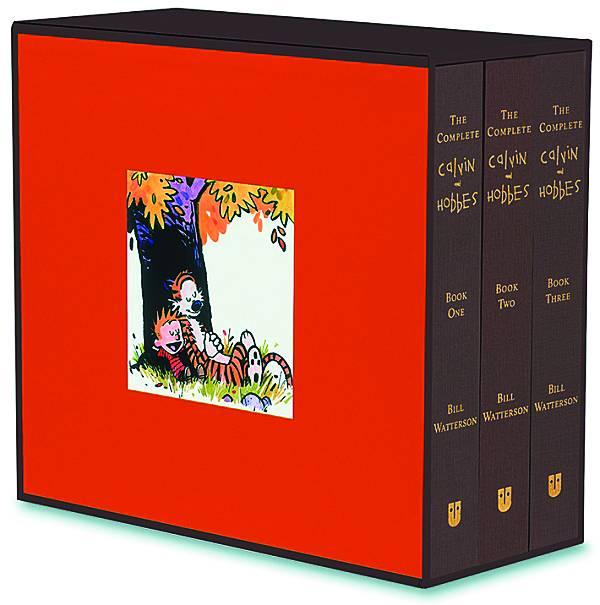 Calvin and Hobbes is unquestionably one of the most popular comic strips of all time. The imaginative world of a boy and his real-only-to-him tiger was first syndicated in 1985 and appeared in more than 2,400 newspapers when Bill Watterson retired on January 1, 1996. Composed of three hardcover, four-color volumes in a sturdy slipcase, this New York Times-bestselling edition includes all Calvin and Hobbes cartoons that ever appeared in syndication. This is the treasure that all Calvin and Hobbes fans seek.