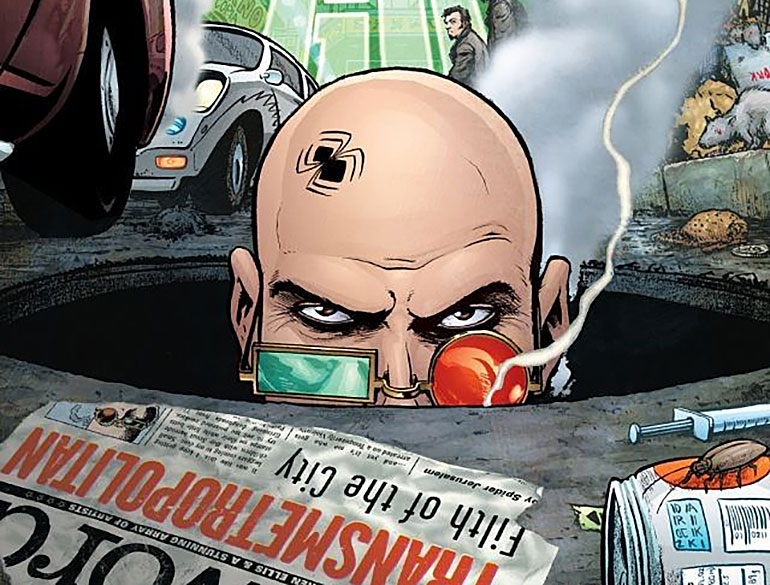 Welcome to TransMet — the weekly column from Emma Houxbois that deigns to read and analyze Warren Ellis and Darick Robertson’s Vertigo Comics series Transmetropolitan, one issue a week for a year. A year that just happens to begin with Donald Trump’s US presidency and ends with… well, I guess we’ll see.

Power does what it wants and now they’re just more naked about it. Now they just put it right out front and say this is what we’re doing to ya, folks.

It’s a simple statement to make, about as simple as it comes. As such, it’s an easy thing to say that modern comics have always been political in response to calls to defang, depolarize, and ultimately devalue the discourse within them.

The political is never a neutral or inert value, it always has a velocity and a vector, so when someone takes the position that modern comics, or superhero fiction in specific, has always been political, they typically mean something very specific. A willingness to be iconoclastic, to take the initiative  to lead the culture when it’s inconvenient or even dangerous.

The most iconic and universally recognized example in the medium is Jack Kirby and Joe Simon’s resolve to introduce the world to Captain America by portraying him punching out Adolf Hitler a full year before the United States declared war on Nazi Germany. It’s as crisp and clean of an example of superhero fiction taking a principled stand as you could ask for.

It’s the gold standard to which the political currency of comics is held, but it offers little in terms of a framework for probing the depths of the dysfunction of the American experiment that has lead us to the current moment. There’s been plenty of exceptional works that politicize and examine specific issues, but there’s only one truly seminal comic that dedicated itself to examining the place of Presidential politics in American life in a way that can drive a meaningful discussion of the present moment: Transmetropolitan.

Launched in 1997 under the defunct Helix imprint and later moved to Vertigo, Transmetropolitan was fueled by many of the same pre-millennial anxieties as The Invisibles. Instead of pulling together an allegorical work meant to project a hopeful and energetic outlook onto the next century like Grant Morrison and his various collaborators did, Warren Ellis, with Darick Robertson and Rodney Ramos in tow, created a cyberpunk future helplessly re-enacting the political theater of the 20th century.

It’s one of the earliest and most explicit examples of the thesis that Ellis would go on to refer to as uncovering the unexploded bombs of the 20th century, and it’s told in the hyperbole and lurid violence of superhero fiction.

As much time as Ellis has spent many years sneering at superheroes, sometimes even in the midst of writing them, much of his career has been spent in direct reaction to them and Transmetropolitan is no exception. Its protagonist Spider Jerusalem may take the first half of his name from science fiction author Spider Robinson, but the tattoo on his forehead is absolutely a poke at Spider-Man.

He may not have a cape or an alter-ego, but Jersualem exists very much in the mold of a superhero, projecting the same kind of voice of authority and power fantasy onto the narrative as Batman. Spider’s rage, despair, and cynicism towards the events unfolding around him are meant to be explosions of our own reactions to the political world.

He’s arguably one of the most effective conduits for rage against injustice that modern comics has yet to invent. It’s the dominant reason why I found my political voice and conscience within comics in Transmetropolitan when I first encountered it during the George W. Bush administration, as many others have both before and since.

Returning to it now creates the opportunity to examine how creators embed political messaging in comics and readers receive them at a time when the need for sharp and effective stands on a wide range of issues has never been as acute. 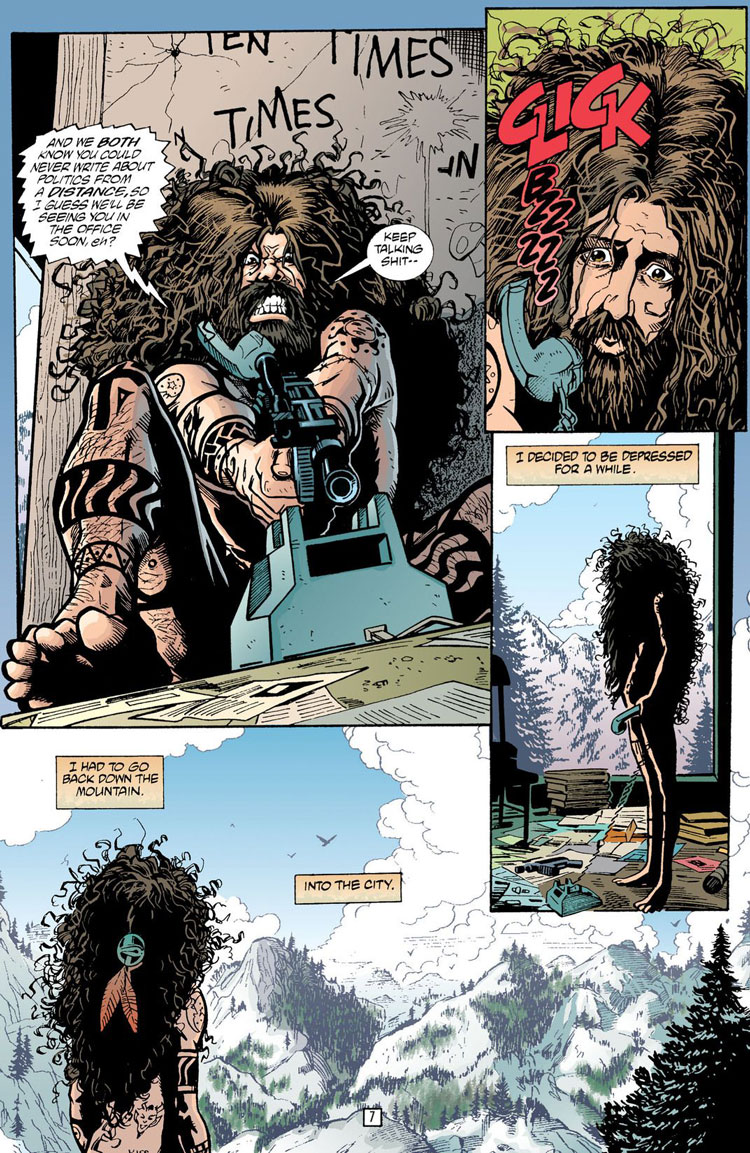 Much has been made of the supposed predictive powers of Transmetropolitan over the years, which misses the point of its continued utility. It didn’t predict Trump’s rise, nor was it intending to.

Many of the key players like The Beast, Fred Christ, and Joseph Heller are reflections of prominent figures in the 1960s that have earned new and frightening relevance. Gary Callahan’s presidency, however, represented the rise of the neo liberalism embodied by Bill Clinton and Tony Blair (the source of The Smiler monicker) in the dying days of the 20th century.

The idea of reviving Transmetropolitan as a focus for discussion in the intersection of comics and politics isn’t about a scorecard for what it got “right” or “wrong” about advancing technology or key events for me, it’s about examining how we conceive of politics and the media, and even more fundamentally what we want to believe about journalism as an institution.

Journalism, Spider tells us, is all about human reaction and criminal enterprise. It’s a very limited perspective, but it’s also a disturbingly ideal one to approach an incoming administration dogged by accusations of foreign interference and caught up in a tangled web of conflicts of interest.

Digging into Transmetropolitan won’t result in articles of impeachment being served, but it absolutely can — and will — direct and sharpen artistic manifestations of dissent.

Tune back in this Friday — Inauguration Day — to read Emma Houxbois’s take on Transmetropolitan #1.