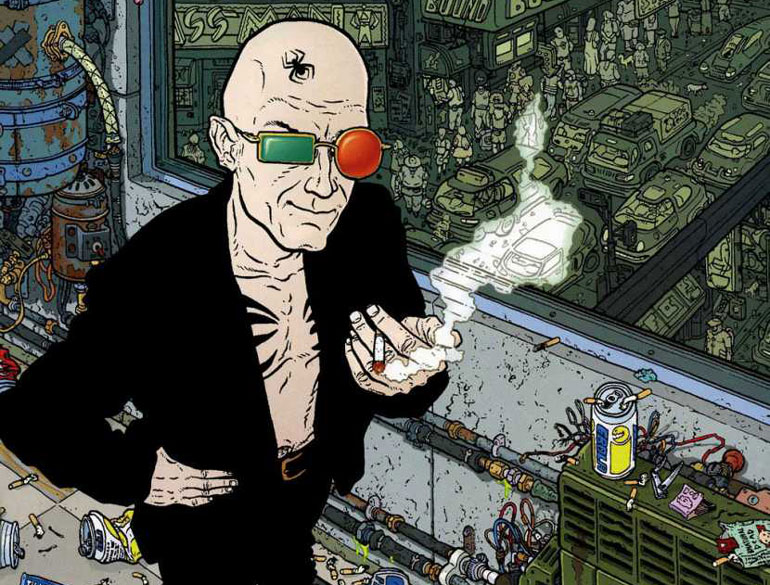 The sand is always shifting under my feet. The tides are broadly predictable on an ordinary day, but there aren’t many ordinary days.”

What first struck me upon re-opening Transmetropolitan with an eye towards doing an examination like this is its density. I first thought about running this on my Patreon during the campaign, my plan was to do a trade a week. That idea went up in flames as soon as I’d gotten through the second issue because there was already too much to process, too much I wanted to say.

It’s the wee hours of inauguration day as I write this. Choosing today to begin in earnest was a conscious political act, but there’s no big political statement, no allegorical set piece in the first issue to riff on, which is pretty appropriate given that last night’s inauguration concert was, in the words of Rob Harvilla, “two and a half sullen hours Thursday afternoon at the foot of the Lincoln Memorial.”

Instead of the Trump fantasy of machismo-fueled patriotism and flagrant displays of wealth coming to life, it was a hard landing into the reality that this is a President without a mandate who lost the popular vote by nearly three million ballots. The arrival of fascism in America was built up for decades to be a Michael Bay production full of flags, explosions, and exploding flags. What we got was the Presidential version of Tommy Wiseau’s The Room: an incoherent mess put on by a rich man who bought his way into a gig he had no idea how to manage.

Things went considerably better for Ellis and Robertson in their debut effort. We first meet Spider utterly isolated in a fortified cabin deep in the woods, down to his last five dollar bill festooned with a dead rat and a note to buy more bullets scrawled on it. He’s backed himself into a corner entirely of his own making, having blown through the advance for two books with nothing to show for it but empty vials and shell casings.

The isolation, paranoia, excessive drug use, and gun obsession puts us in the frame of mind to contemplate Spider as a parody of Hunter S. Thompson first and foremost, but there’s plenty of him to go around.

The first time I read the series, it struck me that Spider’s first issue transformation from wild haired, bushy bearded hermit to utterly hairless and sporting bizarre sunglasses more or less took him from Alan Moore to Grant Morrison, which is probably accidental. The preference for living in relative isolation and grudging return to the city is all self parody on Ellis’ part, however.

In 2015, Ellis took to Medium to offer up a contemplation of how geography informs his worldview that harkens back to Transmetropolitan’s debut. He parallels the shifting sands he’s observed living on the coast his whole life with his changing fortunes as a freelancer, putting Spider firmly in an ebb tide when we first meet him. Ellis’ thoughts on how this relates to aging puts him more or less in line with what he conceived of for Spider twenty years ago.

What Ellis pointedly does not do with Spider is transfer the precariousness of the freelance writing life that he describes in The Littoral Space to him. The first signs that Ellis was undertaking to create a superhero-like power fantasy are in how he immediately insulates Spider from the vulnerabilities of real world journalists. Spider has access to a loyal editor who can hook him up with a salaried position that includes his housing, but the most blatantly fantastical and intriguing construct is “journalist’s insurance.”

As long as Spider maintains his credentials, he not only has the kind of access to people and places that accredited journalists enjoy, he also has full health coverage and a level of immunity from prosecution more or less equivalent to the President. It’s clear from the very beginning that Ellis has intentionally built himself a sandbox where his antihero can behave with relative impunity. 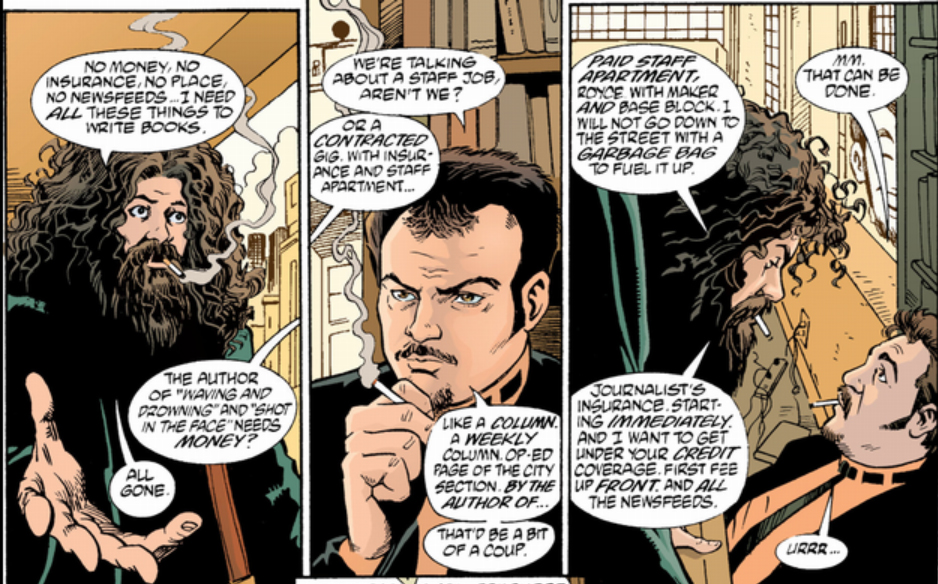 It’s the starkest contrast with the world we live in, considering the so-called free speech pens the Bush administration innovated, the Obama administration’s record breaking number of denied FOIA requests, and Trump’s combative relationship with the media that has included mocking reporter Serg Kovaleski’s arthrogryposis and floating the idea of introducing urine testing for the White House press corps.

Ellis ostensibly wanted Spider to flaunt the law in an even more flagrant and normalized way than Batman in order to imbue Spider’s particular brand of reporting with the same kind of vicarious thrill we get from Batman beating The Joker up and sending him back to Arkham.

Which is also the fundamental reason why I’m writing this and you’re reading it. Explorations of the series’ allegory and its applicability to contemporary politics are admittedly a secondary concern. The main draw is exploiting Transmetropolitan to claw back the possibility of justice and ease the burden of resisting the incoming administration with a double shot of catharsis that only the heady mixture of heroic fiction and unrestrained political satire can provide.

After all, underwriting or absolving the bad behavior of someone in pursuit of a mutually agreed upon villain is more American than an apple pie with a latticed crust dyed to look like the stars and stripes.

It’s a benign enough attitude to take when cheering for Tony Stark in a comic book or holding your nose to root for The Patriots’ Tom Brady over The Steelers’ Ben Roethlisberger, but it also leads to things like ignoring the probable war crimes committed by the elite unit responsible for killing Osama bin Ladin.

Or as we just saw in real life and will soon see in Transmetropolitan, electing the wrong President.

Come back every Friday for another issue of Transmetropolitan analyzed — welcome to 2017!