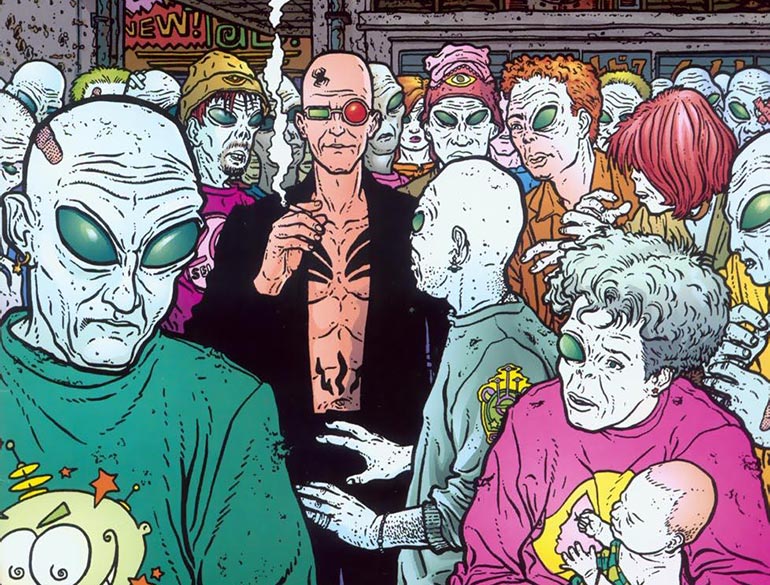 Once re-established in The City, Spider finds his first story opportunity in Fred Christ, a former record producer who’s found a new purpose in life by leading a cult of people turning themselves into aliens.

There probably isn’t another single issue that sums up the hit or miss nature of Transmetropolitan’s political allegory, which has been a bit of an in-house tradition for Vertigo. Many of the imprint’s most iconic series needed a few issues to find their voices. The Invisibles and Lucifer have been especially marked by the criticism of leaning on a similar tone and execution to The Sandman until finding their footing.

Transmetropolitan’s virtues and vices, however, are all Ellis and Robertson. There’s a lot that feels eerily prescient about this issue in the stand that the residents of the Angels 8 slum take against the government, most prominently in the indigenous lead NoDAPL occupation in North Dakota that was all set to pack up until President Trump announced his intent to plow forward on the pipeline, but it’s been a form of protest gaining momentum in recent years from the Occupy Wall Street camp in Zucotti Park to the armed takeover of the Malheur National Wildlife Refuge. 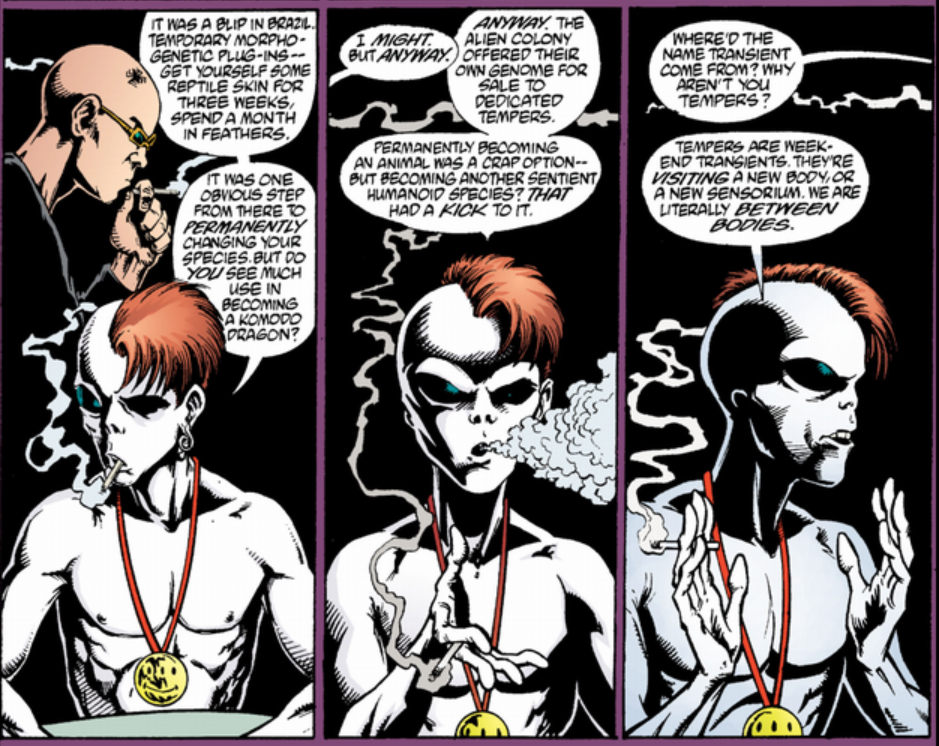 On the flipside, the “Transient” minority group combine some of Ellis’ first serious depictions of posthumanism with the worst tendencies of superhero fiction to skim the struggles of real life marginalized groups to create a fantasy minority.

The background that Ellis teases out for the Transients through the interview between Spider and the cult’s leader Fred Christ is an interesting thought experiment. An alien colony was discovered and forced to bargain their DNA away as a means of buying themselves a foothold in the hyper capitalist hellscape they found themselves enmeshed in.

There’s commentary about the United States’ history of colonialism and exploitation of indigenous people embedded somewhere in there, but what we’re dealing with in the Transients is the people who took advantage of the commodification of that genetic material for cosmetic purposes and find themselves ostracized from society as a result.

It’s a poor dynamic to build up in service to depictions of urban poverty and institutionalized violence, given that the stigma they wear is completely of their own creation. It also establishes the reality that the series takes place in a hypothetical version of the country that is both overwhelmingly white isn’t sustained by white supremacy which only serves to weaken its allegory.

Like the mutant metaphor that’s dominated the X-Men comics for the better part of the last thirty years, the Transients serve to evoke real world issues like the impending police violence that Spider lectures everyone he meets within the blockaded area about, but dislocating the social stigma from race, class, and gender creates an abstract portrayal that can’t tell us anything significant about how police violence functions in the real world.

Which isn’t to say that the Transients lack any redeeming narrative value. The primary way in which they add to Transmetropolitan is to shore up the aspects that look backwards in time rather than forwards. There’s immediate and obvious parallels between the group and the various cults that proliferated throughout the 1960s, particularly in Fred Christ leveraging his leadership position to sexually exploit the female members of the group.

While it doesn’t become clear until much later in the series, Christ later becomes the most unique and subtle of the allegorical characters for his parallels with Charles Manson prior to the Tate Labianca murders. 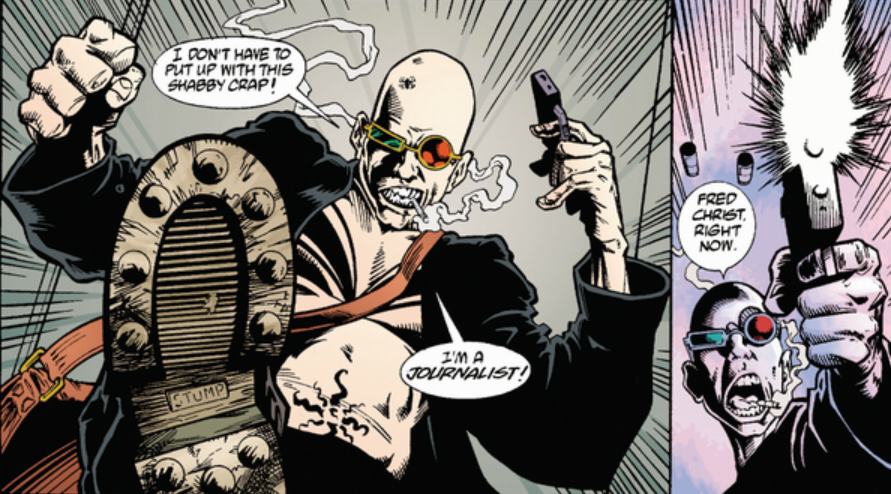 For the most part, this issue functions as the first window into Spider’s methodology as a journalist and just how much it relies on violence and coercion to enact. We get to see for the first time how quickly he swings from physical aggression to quiet empathy, a pattern that repeats itself throughout the series.

The net result of the issue is to make clear the boundaries for what follows: a series that can compellingly illustrate the mechanics of power and execute political allegory that remains relevant to this day but is ultimately helpless in conveying the reality and nuance of contemporary civil rights struggles.