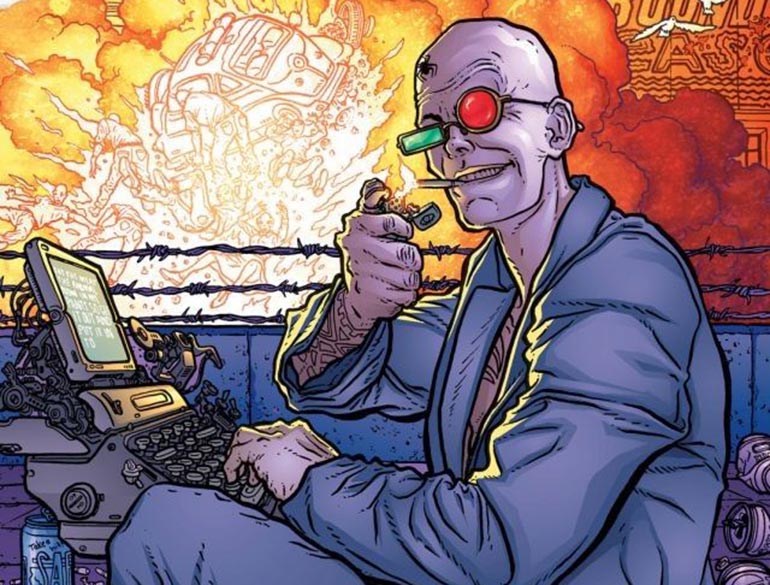 In possibly the most disturbingly specific bit of prescience Transmetropolitan can offer, Spider, via Ellis and Robertson, invents the now commonplace act of live tweeting a political crisis.

Last week, I put forward the idea that the second issue is the clearest example of the series’ chief virtues and vices working at cross purposes because Ellis slows the narrative down to let us examine the gears at work, but this issue is where we see the results of that tension the most acutely.

The primary problem with the Transients as presented by the comic is that their status as the same kind of fantasy minority as the X-Men, Inhumans, or those giant smurfs in that one James Cameron movie is that it dislocates the events concerning them from the wider political and social context of the series. Ellis’ allegory is purposefully atemporal and out of sequence, but the key ingredient of the political meta-narrative is the transition from Nixon’s grim faced law and order to Reagan’s grinning promise of prosperity through projection of power abroad, which was deeply racialized from beginning to end.

The key moment of the twentieth century available to Ellis at the time of Transmetropolitan’s publication to pattern the Angels 8 riots after would have been the Watts riots of 1965, of which faint traces can still be felt. Coming almost immediately on the heels of LBJ passing the Civil Rights Act, the Watts riots were seized on by figures like the quietly scheming Nixon and George Wallace, the strongman governor of Alabama who ran as the American Independent party’s candidate in 1968, to lead a white working class aimed backlash against LBJ’s progressivism.

The Watts riots were a notable event for several reasons, but the main element that carries through into the Angels 8 incident is that it was the first such event that aired live footage recorded by a news helicopter, establishing a new norm that would reach its apotheosis in the infamous OJ Simpson Bronco chase years later.

Just as the KTLA copter was the first to beat print outlets to reporting and established a new norm for reporting on live news, Spider establishes a brand new norm in the public imagination on both sides of the page by sending his writing directly to his editor from a rooftop overlooking the conflict who then licensed it out to feedsites, Transmetropolitan’s equivalent to cable news, who ran it unfiltered as an emergency broadcast. Again, much like KTLA did to the other networks operating at the time for the four days of the Watts riots.

What’s most remarkable about how Spider reports on the riots is that when Ellis wrote it in 1997, web journalism of any kind was still in its absolute infancy. It was only the year before that Gary Webb had published Dark Alliance, the series of reported pieces alleging that the CIA aided in trafficking cocaine through the United States to fund counter revolutionary forces in Nicaragua through the San Jose Mercury’s website.

It was a watershed moment for journalism that offered the series complete with with annotations and supporting documents, almost completely unheard of at the time. So it’s quite the feather in Ellis’ cap that he managed to cobble together a hypothetical set of technologies that are more or less equivalent to the Twitter platform’s microblogging.

Although, with that said, the current zeitgeist is moving away from text based instant reporting to using applications like Periscope to stream live video through social media platforms, echoing the same transition that the KTLA helicopter brought about in an infinitely more viral way. The fact that Spider broadcasts his report by text rather than recording video is somewhat moot in the face of the fact that participatory, stream of consciousness reporting of major world events as they unfold has become a staple of how we experience them. 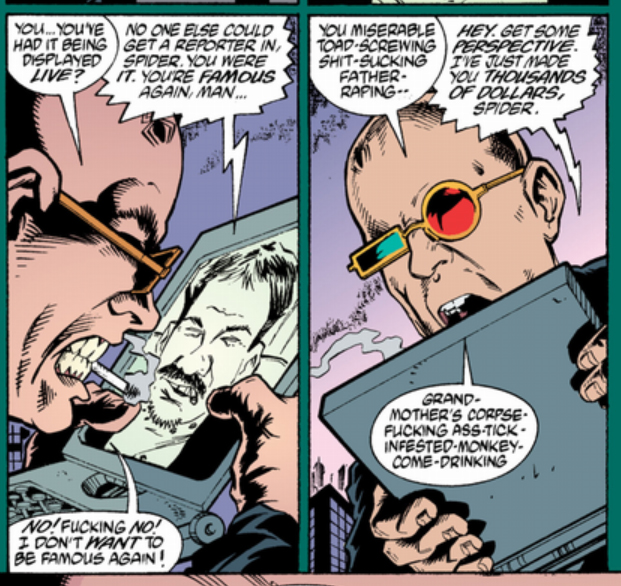 The practice, or tactic, of using live streaming to appeal to a mass audience to bear witness to resistance against state violence or misconduct had its first major test during the Egyptian uprising in 2011, which included major media outlets like Al Jazeera relying on surreptitious filming from a hotel balcony that eventually captured the fall of the Mubarak government and transfer of power to the military.

From there, livestreaming through the Internet either by tweet or video of major developing stories was normalized rapidly by activists and reporters alike. Following the Egyptian uprising, two of the most notable events were Texas Democrat Wendy Davis’ filibuster of an abortion bill in 2013 and the clashes between police and protesters following the shooting death by police of Michael Brown in Ferguson, Missouri.

In Davis’ case, activists doggedly recorded all they could for the outside world out of the fully founded fear that the Republicans on the state senate floor would attempt to either subvert or outright break the law to end her filibuster and force through the bill. She opened the filibuster by saying “Partisanship and ambition are not unusual in a state capitol, but here in Texas, right now, it has risen to a level of profound irresponsibility and the raw abuse of power,” and was proven right by the end of the night when the Republicans recorded the bill being passed before midnight, when protestors in the gallery were clearly recorded obstructing them until well after midnight by making too much noise for a roll call to be taken. They were eventually forced to concede that the bill had not passed, due to the video evidence.

In Ferguson, the threat was far more immediate and visceral. Already dealing with the unarmed shooting death of a local boy, violence much more severe than the kicking of a prone woman by police that instigated the Watts riots or the tazing and beating of Rodney King that triggered the later LA riots, demonstrators were concerned that the police would instigate violence and respond with military tactics and force to peaceful protests.

It was an anxiety openly communicated by the activists who recorded the demonstrations on cellphones and body cameras, asking viewers to keep watching no matter what in order to bear witness to what transpired and hold authorities accountable for their actions. Those fears, again, proved credible. An officer was suspended indefinitely and eventually resigned under pressure from the ACLU after being caught on video pointing a rifle at peaceful protesters and threatening to kill them. Criticism of the police response to the demonstrators and journalists lead to widespread revisions of allocation of military equipment to police and a federal investigation that found widespread racial bias in the policing of Ferguson.

The indigenous lead resistance to the Dakota Access Pipeline is the latest and longest ongoing major manifestation of broadcasting activism as a means of holding power accountable for its responses and has seen its share of further mutations from actress Shailene Woodley livestreaming her own arrest to the use of commercial drones to broadcast to the public and monitor nearby police movements.

So it’s not entirely fanciful that Spider’s coverage of the riot prompts the police withdrawal, it’s simply a contrivance to expedite the story and validate the character’s authority. The problem with the issue as it unfolds is with the Transients. Beyond the unhelpful conceit of being essentially voluntary minorities engaging in deeply dubious cultural appropriation at the genetic level, Spider robs them of the agency of their choices, an attitude that isn’t interrogated or challenged elsewhere. His framing of the event is that it was an engineered piece of political theater that they were the unwitting victims of. 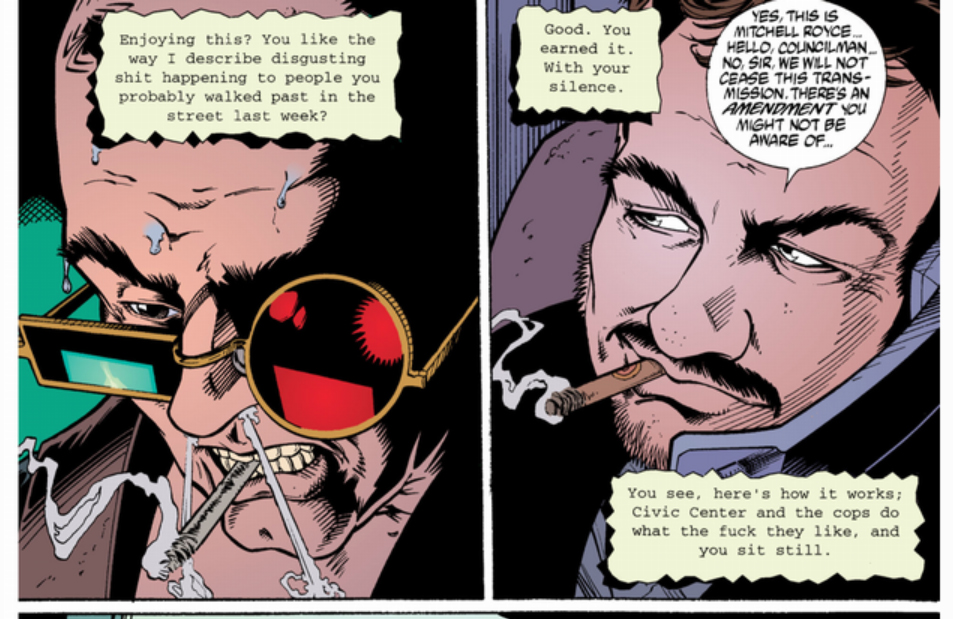 This is, in a sense true, as future issues bear out that the riot was the product of collusion between Fred Christ and state actors, but there’s no other significant voice of the people. There’s just the opportunistic Christ and his dupes, which ultimately precludes any meaningful portrayals of resistance to state violence or organizing tactics. The Transients are simply grist for the mill of Spider’s character development and a canvas for projecting the future technologies onto.

Because the Transients don’t correlate to any real world marginalized group and are clearly framed as “kids who thought it would be fun to have an alien body,” there’s nothing particularly troubling about that dynamic, it just constitutes a significant missed opportunity and is the first indication of how much the series’ ability to comment on the real world is compromised by not taking race or gender into serious account when examining abuses of power.

The upshot to the ultimate vagueness of how Transmetropolitan deals with institutional prejudice and police violence is that it renders the narrative incredibly plastic and open to interpretation and appropriation by the reader, giving it an almost open source quality like Grant Morrison’s concurrent The Invisibles.