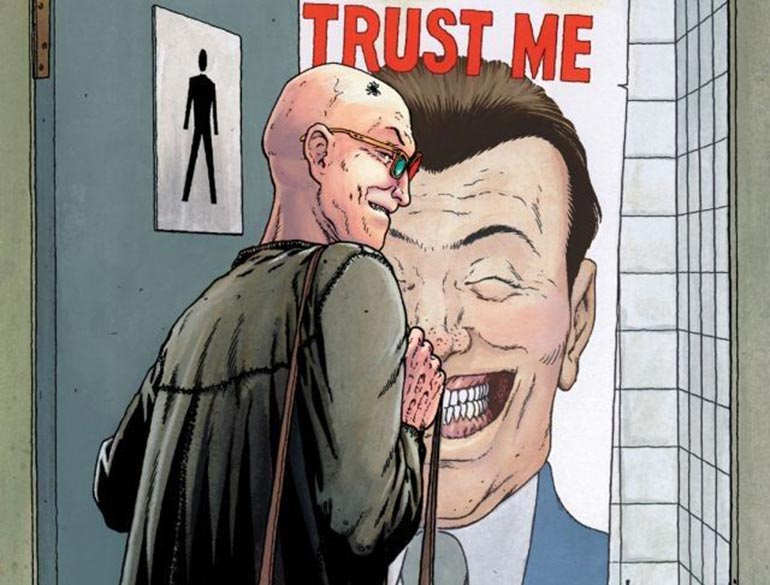 With the riot fading into the distance for the time being, we get the first solid look at what Spider thinks journalism is for and The Beast enters stage right.

While the first couple issues were dense with ideas about the future to analyze, the third issue — which also serves as the opening issue of the series’ first real arc — is mostly about establishing the status quo that Spider operates from for the bulk of the series. The issue opens with Spider writing while naked on his balcony, imagery that Ellis and Robertson return to time and again throughout the series.

More importantly, it reintroduces us to Channon Yarrow, the stripper with barcodes tattooed on her breasts in place of nipples from the Angels8 strip club Spider wrote his column from the roof of. As it turns out, Channon daylights as a journalism student and has been assigned to Spider by his editor. Channon defends her sex work to Spider by stating its value to her and how it doesn’t define the full scope of her personhood, but as welcome as that characterization is, Channon sits at the center of the series’ deeply ambivalent outlook on sex work as a whole. 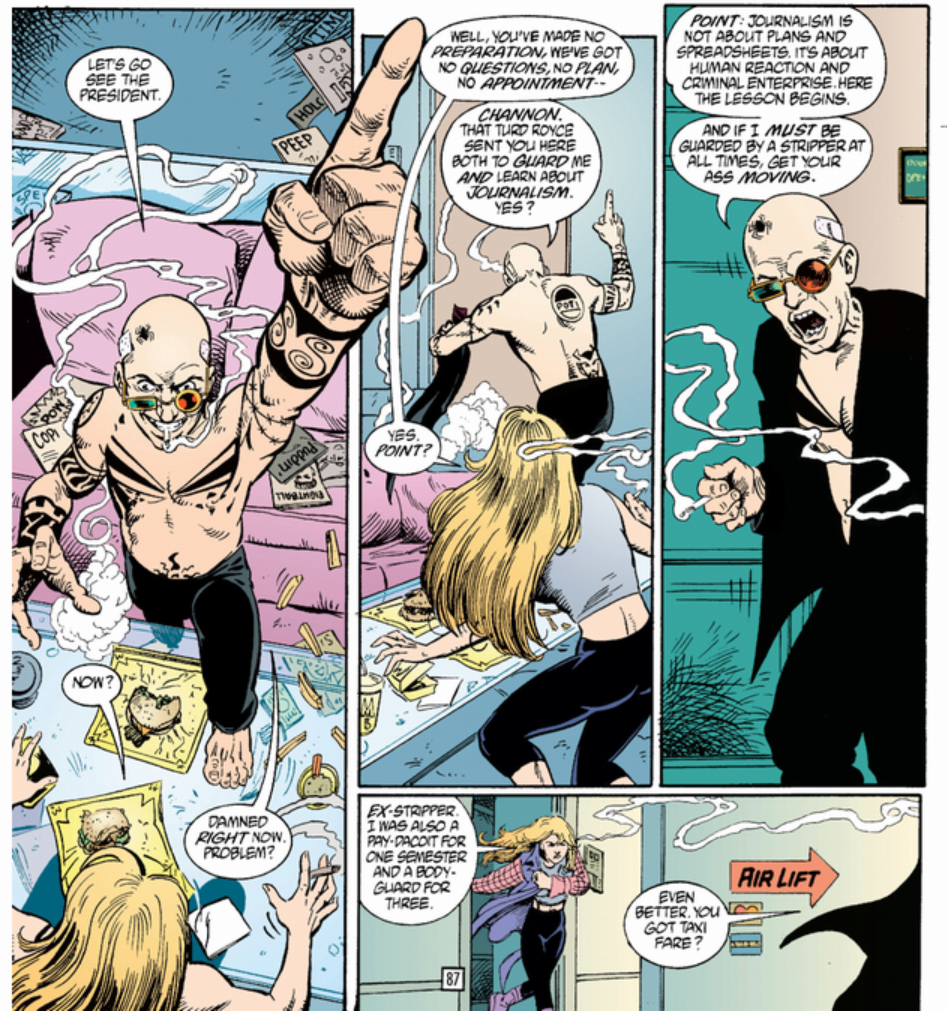 Whenever a character like Channon is centered, there’s nuance and intelligence applied, but it exists in a wider context where “whore” is thrown around like candy without any attempt at engaging or challenging it. From the first page of the first issue, Spider refers to his editor at the publishing company as “The Whorehopper” and in this issue, we’re introduced to The Beast with the implication that he picked up an STD from sex workers in Australia.

The net effect is to create an unresolved tension between the humanity afforded to individual sex workers and the devaluing of them and their work when discussed in the abstract. For The Beast to dehumanize the women he hires is one thing, but for Spider – who is presented as the de facto moral authority of the narrative – to project the same attitude is something else entirely.

Fleshing out sex workers into full characters while reinforcing the stigmas associated with their work in other ways is hardly exclusive to Transmetropolitan, but it does very specific harm to the story’s moral and ethical framework. As is implied by The Beast’s utterances here and The Smiler’s downfall much later, the world that Ellis and Robertson built retains hiring sex workers as a taboo that can be exploited to destroy political careers, but there’s no significant examination of that taboo. The comic remains worryingly silent on the fact that some of Spider’s most significant political victories come from exploiting the existence of questionable public mores, which goes against the spirit of the series as a whole.

It’s a reality brought into sharp focus this issue as the extremely deliberate nature of the choices made elsewhere are foregrounded. The most amusing thought experiment so far is just how deeply Ellis thought about the future of smoking as Spider casually tells Channon she’s going to have to start smoking as his assistant and that this will require a prescription for a cancer suppressant drug.

Ellis was very clearly married to the aesthetic of smoking cigarettes. It’s a key part of the visual language Robertson uses to communicate Spider’s mood, but also felt the need to explain its continued existence in a society that has made gigantic technological and social leaps in other areas. If Ellis and Robertson had really put their minds to it, they probably could have invented a fictional precursor to vaping on the spot, but the cigarette represented an aesthetic they clearly couldn’t do without.

What’s most intriguing about smoking in Transmetropolitan is the lengths that Ellis went to establish that it was no longer necessarily a cancer causing habit. He created an ethical out for depicting people smoking, but he also did it at a time when there wouldn’t have been any significant pressure to do so.

In 1997, John Constantine’s smoking was such an integral part of his character that Hellblazer had been more or less been doing free advertising for Silk Cut for a decade, which holds true twenty years later for Simon Oliver and Moritat’s current run. Even the smoking ban put in place at Marvel by then Editor-in-Chief Joe Quesada, ending Wolverine and Nick Fury’s cigar chomping days once and for all, wouldn’t happen for another four years.

The kind of world building that goes into Transmetropolitan makes the storytelling priorities very transparent, as evinced by the very significant amount of effort put into how smoking is conceived of in the future and the complete lack of it in revising how sex work is viewed.

Beyond sex and smoking, this issue stands out the most as the namesake for this feature and the parameters that Spider sets out for what journalism is and how one does it. Spider’s sermonizing to Channon on the subject begins not unlike Johnny Lee Miller as Sherlock Holmes’ admonishments to Lucy Liu’s Joan Watson on Elementary.

Spider isn’t just teaching  a way of writing, he’s teaching a way to look at the world as divorced from her college coursework as Holmes’ investigative methods are from conventional police work, and he hides those lessons in menial chores like fetching him food, just like Holmes does. Considering the eccentric methodology, abrasive personality, prolific drug use, and hyper-competence Spider is imbued with, there’s a case to be made for parallels with Holmes, but it’s a thin one.

What Spider is preaching – embracing the subjective and abandoning a removed, putatively objective perspective on the world – has a lot of its roots in Hunter S. Thompson’s gonzo journalism, as does his specific animus with The Beast, loosely patterned after Thompson’s vitriolic assessments of Nixon.

Thompson is almost inarguably the most influential and important journalist of the twentieth century, having taken Tom Wolfe’s conception of The New Journalism, using the language and format of fiction writing in non-fiction, to its furthest logical conclusion in gonzo. The wholehearted embrace of subjective experience and cultivation of the surreal that Thompson both practiced and advocated for is more or less the foundation for Vice’s media empire and the forerunner for the kind of cult of personality that bloggers and YouTubers thrive on. 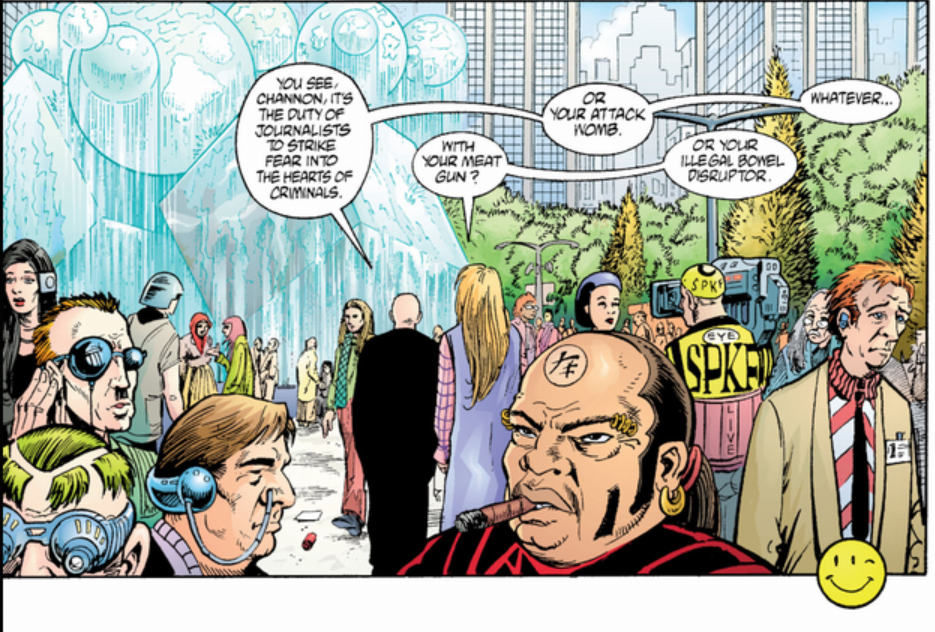 Where Spider diverges from Thompson is that while Thompson advocated for inserting the author’s subjective experience of events into reporting, Spider believes in the journalist as an active participant in the political process and a moral gatekeeper for society.

“You see, Channon,” he tells her after making the President shit himself, “it’s the duty of journalists to strike fear into the hearts of criminals.” If any doubt remained that Ellis was deliberately reconceptualizing journalism as a superhero informed power fantasy, it breathed its last breath as Spider paraphrased Batman. There’s a certain irony to Spider rejecting Peter Parker’s “with great power comes great responsibility” maxim for Bruce Wayne’s terror tactics, but Vertigo is, after all, an imprint of DC, and impertinently referencing Batman is Warren Ellis’s favorite hobby.

All of this sends a very specific message, though. It’s telling us that Spider has been purposed built to give the audience the vicarious thrill of hitting back against the political machine that cynically dictates their fortunes. If Spider is comparable to Lois Lane -his parent company’s most iconic journalist- in any way, it isn’t the crusader for truth and transparency that generations have fallen in love with, it’s Kate Beaton’s apocryphal version who deals in much more visceral thrills. Or, more accurately, a teen reporter of her own invention.