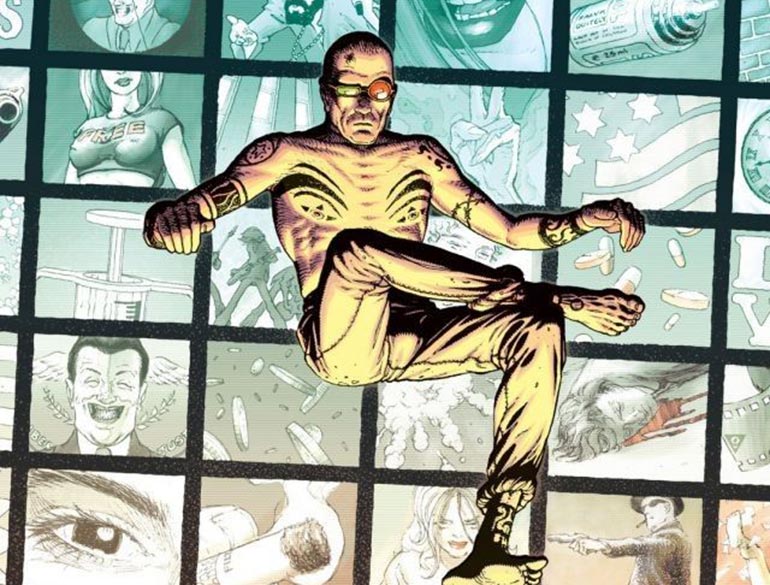 And now for an issue where Spider watches television for a whole day.

Overall, this is probably the most quaintly dated issue of the series in the sense that Spider is catching up on how normal people live by watching television in a way that pretty much only the elderly and intentionally indolent do now: on a television set with a cable box. Like the cigarettes last issue, the instances where Ellis and Robertson decide not to prognosticate about the nature of future technologies are just as revealing about the kind of stories they want to tell as the ones where they do. 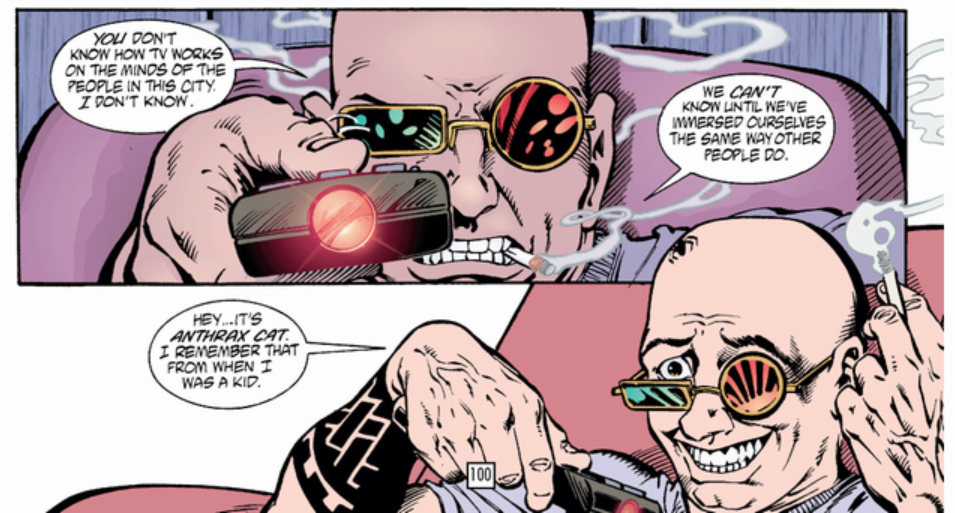 Despite the cult image of the series that has proliferated over the years selling it as a future predictor, Transmetropolitan is probably Ellis’ comic of the era that’s the least invested in serious crystal ball gazing. What gets lost between the allegory for the political theater of the 60s through to the 90s and the parallels with what’s elapsed since is just how much of the series is also dedicated to the millennial angst contemporary to when it was written. Taken against its immediate forerunners at Vertigo, The Invisibles and Preacher, it’s easy to see how that aspect fades relative to how Morrison and Ennis turned the dying days of the 20th century into visceral spiritual crises.

Television as that which the media world revolves around is a specific and pointed evocation of how the twenty four hour news cycle was transforming life in the 90s. “They made me into television,” Spider moans to Channon at the issue’s conclusion, having surrendered to the forces behind Cronenberg’s Videodrome minus the body horror. In a hilarious perversion of Marshall McLuhan’s famous mantra “the medium is the message,” Spider is drawn right into it when his heckling of various hosts becomes the news itself.

Beyond being an amusing filler issue, the focus on television and the central cultural role it occupies in Transmetropolitan’s world creates the parameters for the rest of the series. Television is the mass medium that both mediates and dictates reality. Print journalism of Spider’s stock and trade is, while not stated explicitly, implied to already be in the advanced stages of decline that it is currently struggling against in the real world and the web is a truly subterranean tributary.

TV should feel so lucky these days, as it has unequivocally fallen to the web, and increasingly, Twitter as the center of gravity for media and politics. For the events of this issue to play out in a world more in tune with the present moment, it would have had to kick off with Spider being set loose on Twitter, trolling various celebrity accounts and going on threaded tweet rampages, exposing just how much more access to the public discourse a sufficiently motivated single actor can have in this day and age. Especially if they have presidential ambitions and the means to carry them out.

These seeming anachronisms do nothing to dim the series’ shine, especially in the broader context of Ellis’ career. In the years since Transmetropolitan, Ellis has returned to kill the 20th century several times with about the same palpable glee as Batman repeatedly beating down Joe Chill in “For the Man Who Has Everything.”

For that reason, Transmetropolitan stands out as the planning stages of that murder: choosing a location, sorting out the logistics, laying out the necessary tarps, securing an alibi, and then finally luring the target in. If Ellis’ later work like RED, Desolation Jones, and Planetary were dedicated to unearthing the unexploded bombs of the twentieth century, Transmetropolitan is the survey mission that mapped out their general location.

So what we get with Transmetropolitan is the opposite of the kind of frenetic, apocalyptic urgency given to the onrushing millennium by contemporaries like The Invisibles and Preacher. Ellis and Robertson have instead stopped the clock to create a dystopian future locked in a late capitalist homeostasis. There’s more than a little bit of a whiff of Ellis’ evaluation of Nigel Kneale’s Quartermass to Transmetropolitan:  “a world where there is no forward motion, everything seems to be an iteration of something else, and the lives of hundreds and thousands can be snuffed out at random by something unseen and awful that nobody quite understands.”

In 2009 when Bruce Sterling was out on the tech lecture circuit kicking the tires of atemporality as a historical condition that sounded a lot like Quartermass, a J.G. Ballard novel, an episode of Max Headroom, or some ungodly fusion of them all, it had the tinge of apocalyptic ramblings about it. Especially given that it was in the early days of Obama’s first term, when hope and change sprung eternal. Yet here we are, precisely on the course Sterling charted.

A key marker is the degree with which we find ourselves looking backwards to understand the present moment, especially where the Trump presidency is concerned. It doesn’t feel like reality, it feels like a grotesque simulation of a previous decade’s satire. Vice President Mike Pence, whose legacy as governor of Indiana was an HIV crisis he created through health spending cuts, is the spitting image of anti-mutant crusader William Stryker.

Trump’s presidential ambitions were laid out in Doonesbury strips as far back as 1987, and commentators have pulled from sources as seemingly disparate as George Wallace’s 1968 candidacy, a college football game from 1951, to, well, Transmetropolitan to make sense of it all.

So when we look at Transmetropolitan and it’s powers of prognostication, it isn’t the specific technologies or events that bear the most fruit, it’s the overriding sense of a transition to nowhere, a loss of the sense of the future. Which is remarkable, given that it took another decade for Bruce Sterling and William Gibson to theorize that same atemporality as an incoming cultural condition and another eight years to manifest in an undeniable way. Ellis was, of course, working from relentlessly cited influences like Sterling, Gibson, Kneale, Ballard, and Moorcock in crafting the world of Transmetropolitan. It could also be argued that culturally, politically, and economically stagnant futures have had a significant presence in science fiction since H.G. Wells’ The Time Machine, but what Ellis does is imbue that stagnation with a specific resonance that has spoken to readers for twenty years. 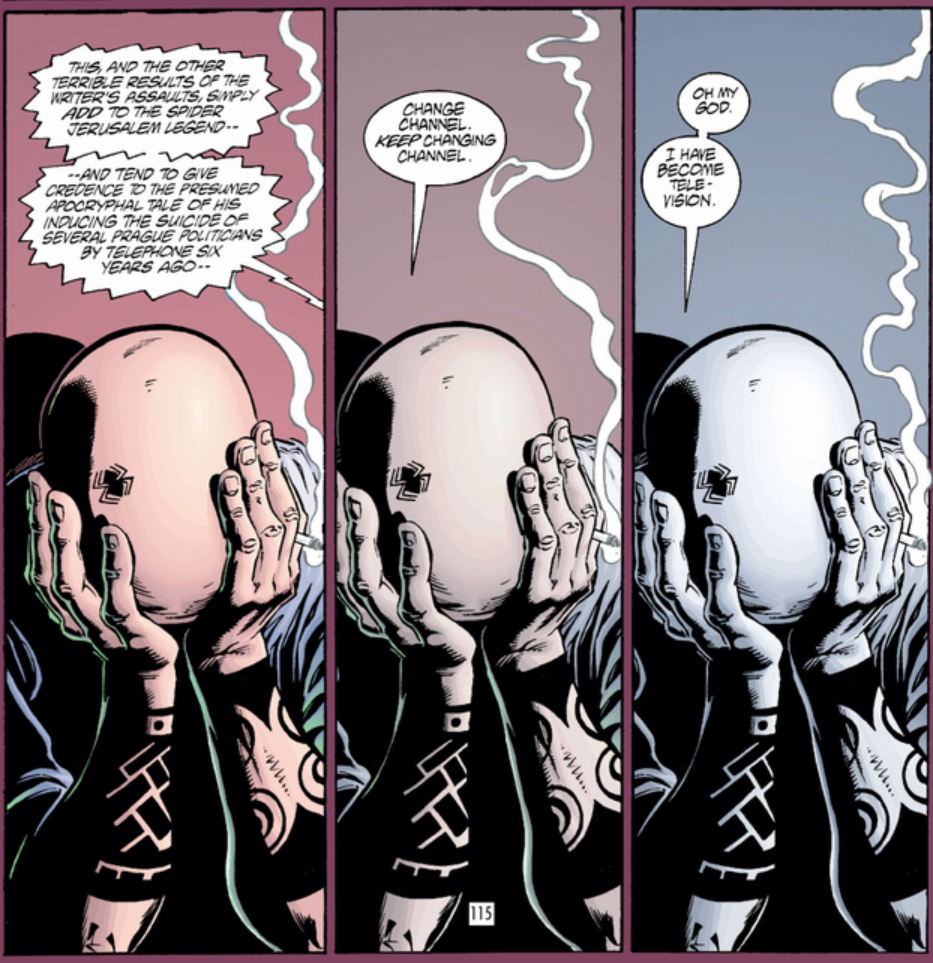 While William Gibson was working on Zero History, he was said to have claimed the way to treat a new idea in the context of rapidly accelerating times was to present it as an antique, as if the concept were already old, like the meticulously reconstructed MA-1 bomber jacket that its heroine wears. While Transmetropolitan hasn’t quite been buffed down to the point of arriving perfectly antique — thanks in large part to Nathan Eyring’s’ idiosyncratic early digital coloring techniques — it certainly is one of the earliest examples of The New Aesthetic, something like a subtly defective 3d printed Louis XIV chair.