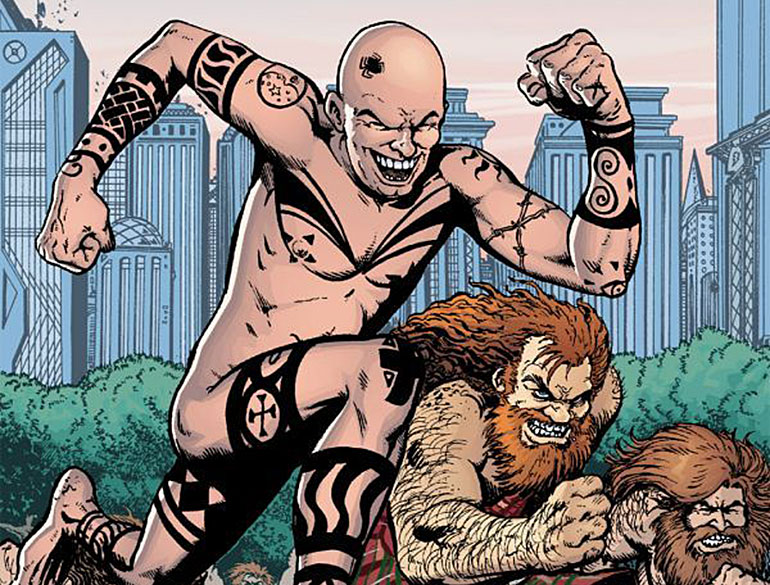 My momma was raised in the era when clean water was only served to the fairer skin.

After a brief hiatus, we return to our regular scheduled programming. When we last saw Spider, he was raging against religion and the cynical exploitation of it for money and power. The following three issues, #7 , #8, and #9, are about expanding on the world that Spider lives in.

The first of the two building immediately off Spider’s flare-up at the religion convention is the first time that we see a true sense of wonder and joy at the world he lives in, as he convinces Channon to join him in seeing her now ex-boyfriend leave his corporeal body to become a cloud of glowing nannites. Channon is initially distraught, framing it as suicide, which Spider takes great pains to disabuse her of.

It’s the first issue of the series where  Ellis’ fondness for speculation on the end goals of body modification and post humanism gets to take center stage, which reveals one of the areas in which his and Spider’s personalities seem to merge. Swinging from grousing at the sorry state of the world to marveling at the extremes that the human body can be pushed to are cornerstones of the Ellis brand after all. 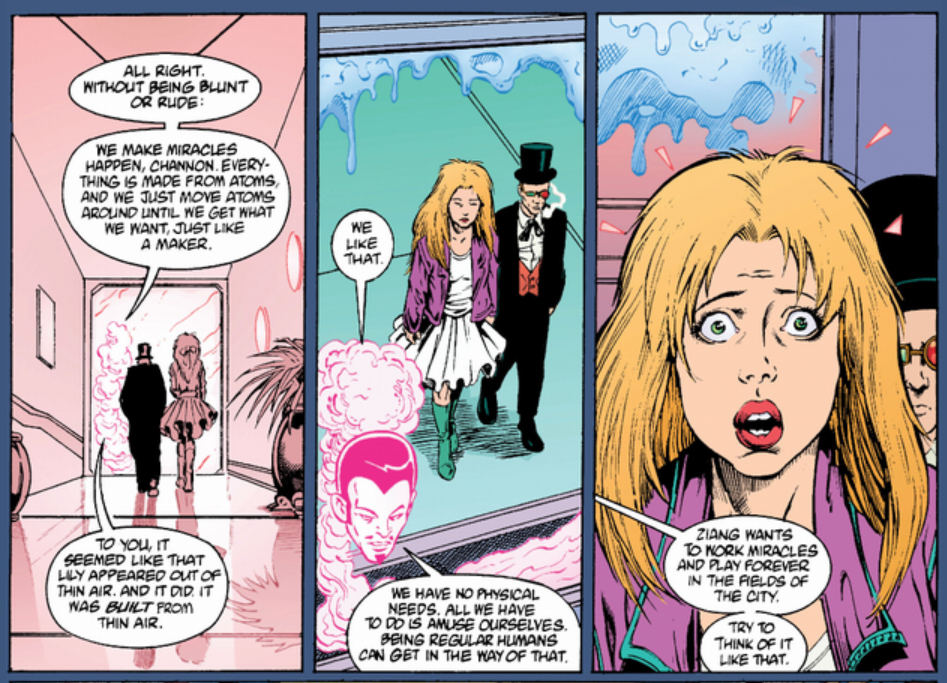 Following that, we get a piece on the revivals, people who were cryogenically frozen in the 20th century in search of either a cure for an infliction or immortality thawed out in the present. It’s one of the many deaths that Ellis subjects the 20th century to as Spider narrates the life of one such Revival, Mary, who was a photographer who documented many of the most transformative moments of the latter half of the century.

What differentiates this particular depiction of the era from the many examinations that Ellis has undertaken from Transmetropolitan to The Authority, Planetary, Desolation Jones, Crooked Little Vein, and Supreme Blue Rose is that it’s the closest he comes to a tenderhearted eulogy. There’s no unexploded ordinance to uncover and no rose tinted nostalgia to chip away at.

Instead, it’s a singular human narrative that tries to capture the value of the lived experience of those times framed against the complete disinterest with which the future has received it. The Revivals arrive in an era in which those born there don’t actually know what year it is and discard them, leaving their forebears warehoused in hostels. Deep beneath the layers of technology and world building that Ellis and Robertson have constructed lies the echoes of The Time Machine and the frivolous Eloi who have regressed considerably and have no conception of what the time traveler can offer them.

It’s a particularly wrenching story to revisit as the news of the deaths of Bernie Wrightson and Chuck Berry breaks, men who shaped what was possible in their respective fields in ways that continue to be felt for decades following their primes and will continue on long past their deaths whether recognized or not. The Revivals may be a science fiction artifact, but they also mirror the mistreatment of the elderly and what we lose by not valuing the weight of their experience.

While our eyes are constantly trained on the future, it becomes easy to lose sight of the living histories that still walk among us. After all, the parts of the twentieth century that Transmetropolitan is most concerned with are still living history even if most of the major players like Nixon and Reagan are dead.

When a conservative cartoonist recently took the utterly repugnant step of casting Trump’s Secretary of Education, Betsy Devos, as Ruby Bridges in a recreation of Norman Rockwell’s iconic painting of Bridges being escorted to school under armed escort, it was necessary to point out that Bridges is still alive. She’s actually exactly a month younger than my father. We’re no more than a generation removed from the desegregation of public schools being met with spectacular and deadly violence. The scars of the civil rights era are much fresher than the dominant media narratives would have us believe.

What elevates the trilogy beyond other retellings of the era is that one of its contributors, Rep. John Lewis lived it and saw it committed to the page. He stood with Martin Luther King Jr, he crossed the bridge in Selma and endured the violence of George Wallace’s state troopers to get there. He even re-enacts the march with children at the SDCCI to give them a living connection to that history.

Lewis may be an extraordinary example of the elders in and around comics whose experiences we need to cherish, but the point remains the same. Especially when the gatekeepers of the industry, most notably the organizers of FIBD, the western world’s biggest comics convention, have ardently stuck to an agenda of burying the history of female creators within the industry, suggesting that we’re latecomers to the medium despite the mountains of evidence to the contrary. What the issue concerning the Revivals tells us above and beyond all else is that we cannot afford to sever our links to the past the way that Spider’s world has.

The following issue captures the brutal irony that while Spider’s world apparently has no interest in reconstructing the past through the voices of those that lived through it the first time, it’s invested incredible time and effort in rebuilding numerous points in human history as reservations that people voluntarily live on.

Of course the general population is largely just as disinterested in genuine study of the reservations as they are what the Revivals have to say, as demonstrated by people sitting adjacent to Spider at a bar drawn to resemble Ellis and Robertson themselves.

To Spider’s growing anger, the pair speculate on the sex lives of the occupants of the reservations to the exclusion of all else, never once stopping to consider the actual motivations behind creating and maintaining the reservations. Just like the Revivals are a concept unto their own yet are heavy with parallels to how our society discards the elderly, the reservations are a lurid explosion of under trafficked museums and the ethical quagmires that they frequently call home.

The reservations are built on the kind of sociological experiments that would be balked at now on numerous ethical grounds, considering that they go much further than the likes of the Stanford Prison Experiment to require volunteers to live out their entire lives in painstaking recreations of times and places as diverse as feudal Japan and Pre-Columbian Central America. Spider is told in his initial interview with the organization that runs the reserves that some of them practice female genital mutilation and he later witnesses human sacrifice.

“We keep history close to make damn sure we learn from it,” Spider narrates, walking away from the scene of a human sacrifice of the kind that has contributed to filling the nearby water with so much disease that the reservation will have to be shut down within the decade. Such is the verisimilitude that running a reserve capturing how the Mayans lived means the inhabitants dying out the same way they did, or at least have been hypothesized to. This, Spider tells us is the fifth iteration of the reservation. 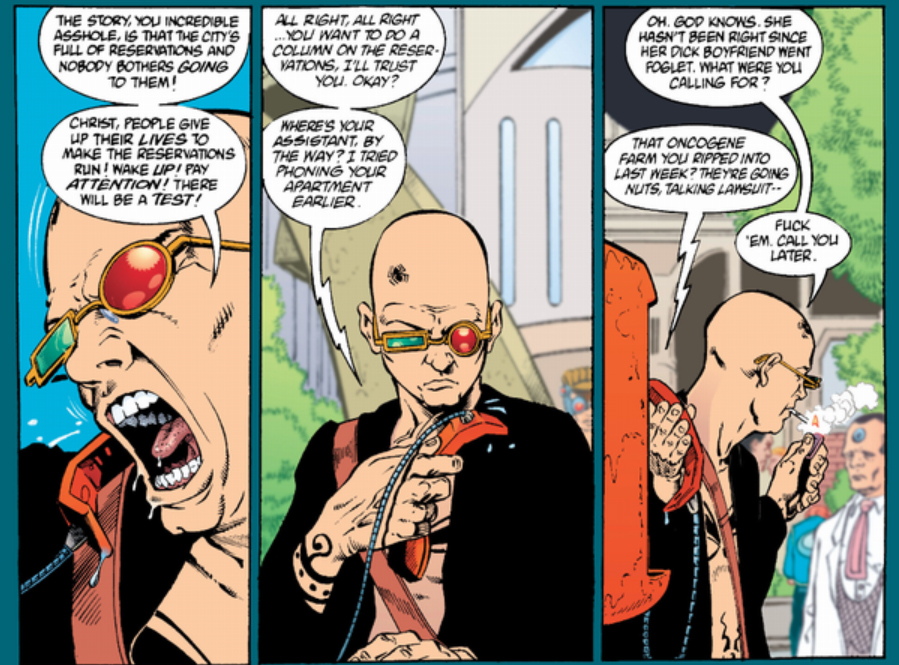 There’s an irony in Spider’s statement that he doesn’t elaborate on given that his previous assignment was spent with a woman more or less expelled from society who had firsthand knowledge of one of the eras that the reservations recreate. The same period whose reservation is the subject of a popular televised drama in the form of Republican Party Reservation Compound. The same period whose ghosts return to haunt Spider in the upcoming election. The same period that has returned to haunt us and drive me back into Transmetropolitan to make sense of.

Access to history, as we’ll soon see, did nothing to immunize Spider or anyone else against the drama that played out across the election, and a drive up Pennsylvania Avenue, or maybe more accurately, South Ocean Boulevard here in the real world will teach the same lesson.