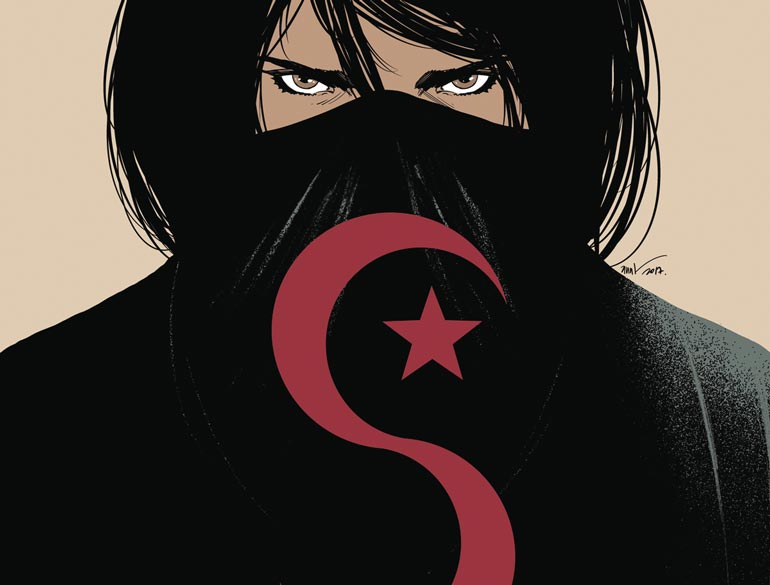 Yes, the arrival of this year’s Amancay Nahuelpan/Matteo Pizzolo comic is a great opportunity to dunk on the pair for only turning in an average of a single collaborative issue a year. But Calexit #2, in addition to the continuation of a must read dystopian nightmare set about five minutes into the future, is also an invitation to catch our collective breath and examine just where the world is relative to the issues at the core of the series since the last time we saw Zora and Jamil in “Not Exactly Trump”-occupied Los Angeles.

It’s a pretty much universally understood notion that dystopian fiction is an extrapolation of the political concerns of the era in which it’s conceived. It is a simple principle to apply to, say, George Orwell’s most famous works, but has become problematized in a dramatically accelerated way over the last decade — and changes as the pace and impact of world events has increased exponentially. 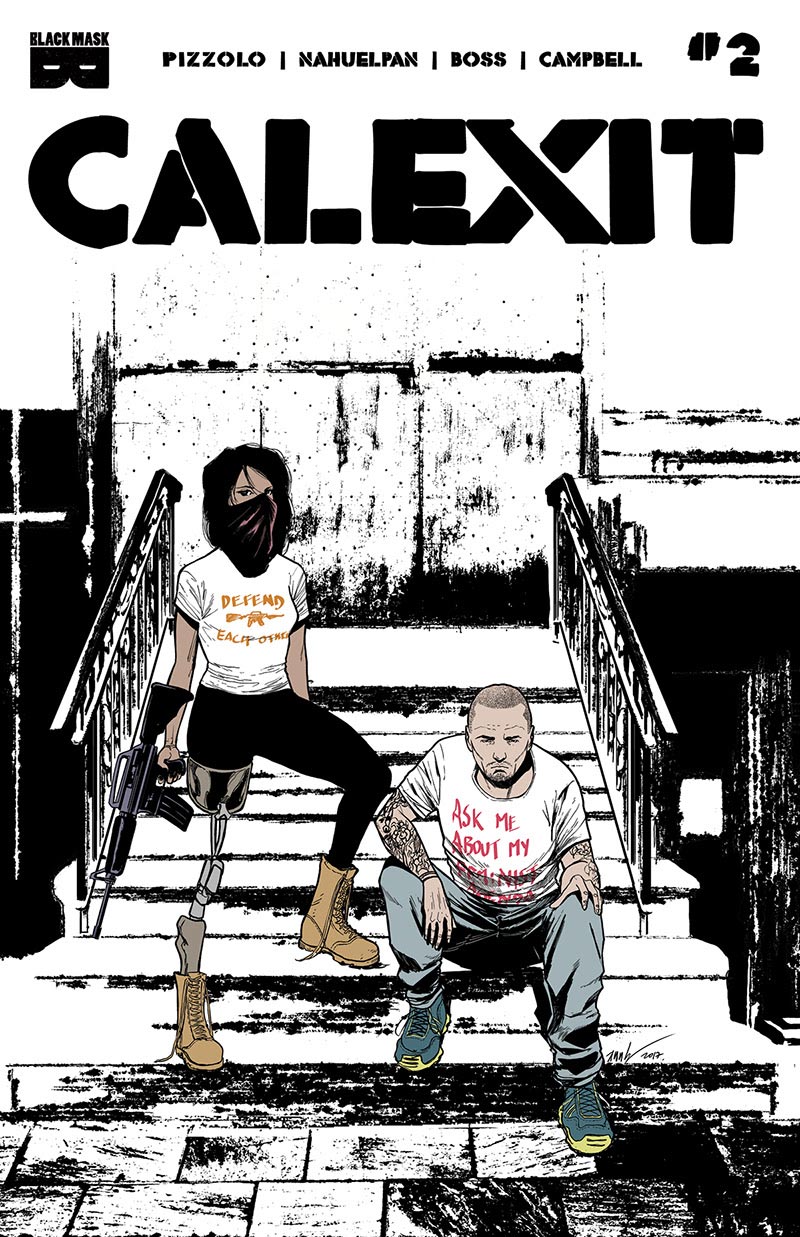 It’s a phenomenon that has left the generation of prognosticating science fiction writers — including Bruce Sterling, Warren Ellis, and William Gibson — feeling behind the curve before their fingers can even hit the keyboard. Gibson, for his part, has come away from the experience suggesting that writers endeavor to deliver a work that feels perfectly antique to the moment in which it takes place, and to more or less give up on the idea of the future as a tense.

Whether they realize it or not, Pizzolo and Nahuelpan — in working at a pace slow enough that we can clown on them the same way that we did Grant Morrison and Warren Ellis at the turn of the millennium (while also significantly outpacing conventional novelists like Gibson and Sterling) — have illuminated the fact that direct market comics may very well be the final frontier for delivering dystopian fiction capable of pointing the way forward at the time of publication.

While they’ve shown that comics can be a brutally effective medium for getting ahead and keeping pace with the breakneck speed of current events, Pizzolo and Nahuelpan aren’t responsible for showing the extreme velocity with which comics can adapt to rapidly developing events. That achievement belongs to Ales Kot, Will Tempest, Clayton Cowles, and Tom Muller, who moved with alarming speed to incorporate breaking stories like Bree Newsome taking the Confederate flag flying over the South Carolina statehouse down or Spencer Ackerman, writing for The Guardian, revealing the existence of a CIA style black site in Chicago being run by local police into issues that hit stands within three weeks of the event. 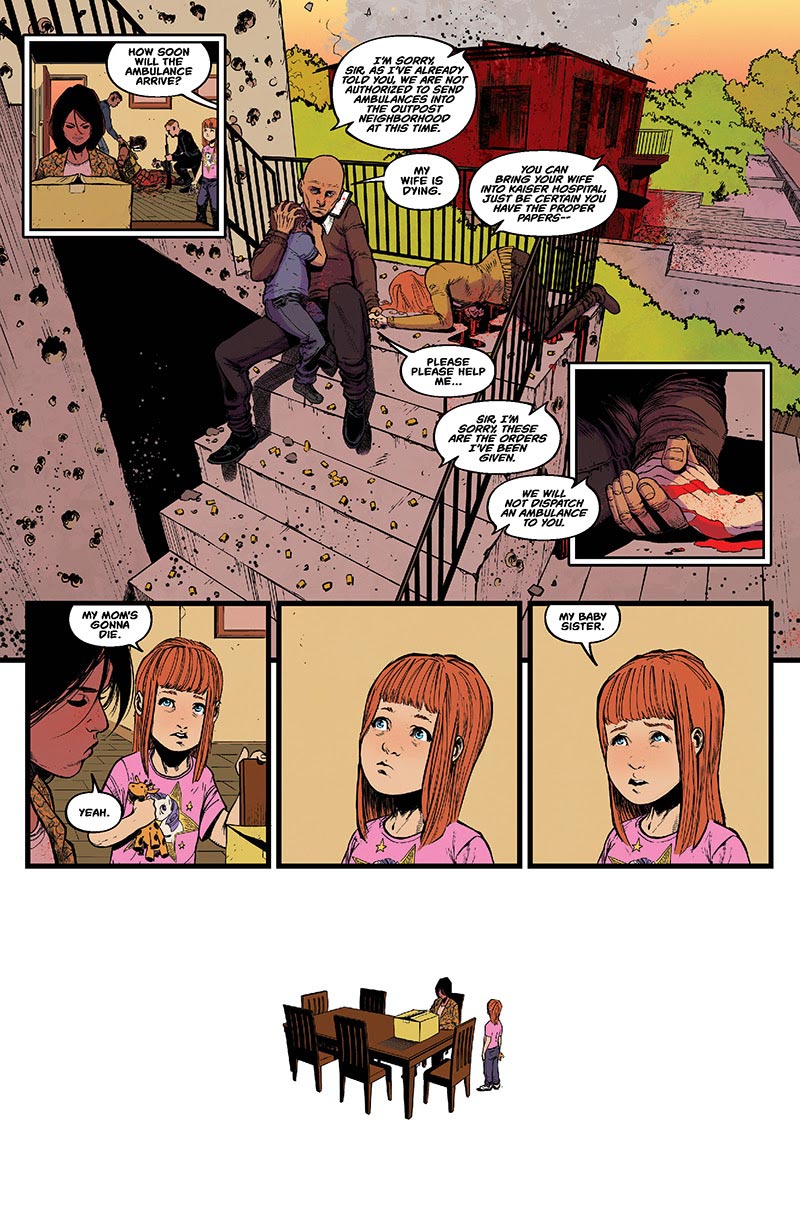 Neither Material nor Calexit are examples that can or will be emulated on a wide scale, but each in their own way has drawn attention to how comics as a medium offers utterly unique methods of meeting the challenges of uniquely trying times. It’s a dynamic that deserves urgent attention given the heightening tone and timbre of discussion around the continued utility and viability of the direct market as a whole.

With that said, what’s so striking about coming back to the world of Calexit after what feels like an eternity is that the central conceit behind the series — that Californians would rather cede from the union than bow to nativist, white supremacist policies targeting its immigration — has captured the zeitgeist down to the minute that the current issue is arriving in. When the debut issue arrived, there wasn’t yet a clear idea in the public imagination of just what the Trump administration would be like on a day-to-day basis, much less where immigration would land as either a legislative priority or a site of active resistance from elected Democrats.

The better part of a year later, after a brutal war of attrition on healthcare and the passage of an obscenely conceived wealth transfer to the already-wealthy, immigration has emerged as the most ferociously contested issue on the legislative agenda to the point that it, and gun control, are all but guaranteed to go on to be seen as the issues that will define an entire generation. 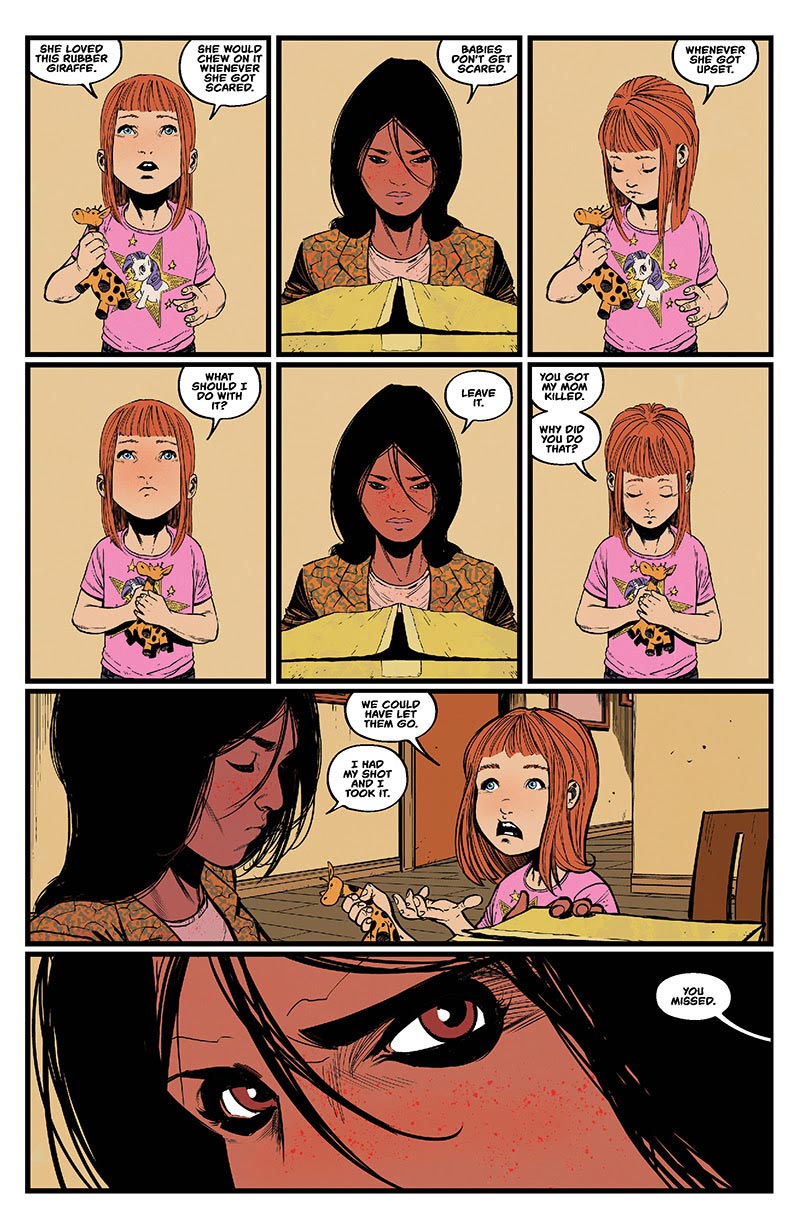 When the series started, I took the position that projecting solidarity from native born Californians with their immigrant population strong enough to force the state to leave the union and withstand an invasion from the federal government was a decidedly optimistic starting point for a dystopia. Partly because there’s just no way to know if a breaking point exists until it’s reached, but also because at the forefront of my mind was the fact that Obama was nicknamed “The Deporter in Chief” by immigration activists for elevating the pace and number of deportations above that of his predecessors in the George W. Bush administration.

But a year and change into the Trump administration, we can begin to see the contours of just how far Americans are willing to go in either direction on immigration issues, which in some ways vindicates Nahuelpan and Pizzolo’s seemingly rosy view.

We’ve seen steps towards genuine courage where little-to-none had been previously expected, like Senate Democrats pushing just past the brink of two government shutdowns in order to secure concessions towards a lasting solution for DREAMers who are losing their ability to stay in the country legally on a daily basis. We’ve also seen acts of extreme, unprecedented resistance to the Trump administration’s agenda, like Oakland mayor Libby Schaaf making a news release warning residents of an impending ICE raid.

It’s an act that goes far beyond the city’s status as a sanctuary city that bars public employees from cooperating with ICE, triggering the petulant threat of pulling the agency out of California entirely, a move that Trump claims would result in an unprecedented wave of crime (despite all available data to the contrary). 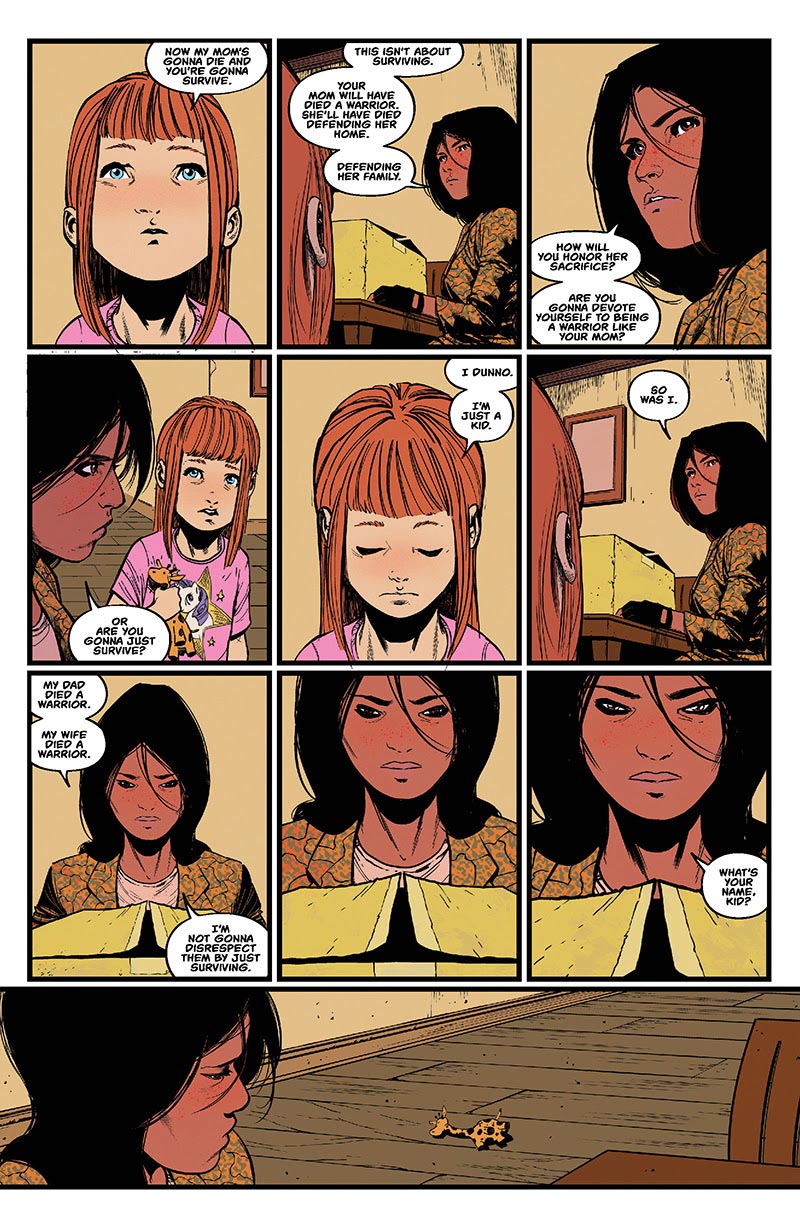 That commitment to the spirit and letter of what it means to be a sanctuary city cannot be taken for granted, as the available facts in the attempted deportation by ICE of New Sanctuary Coalition leader Ravi Ragbir seem to indicate. Despite the fact that New York City is, just like Oakland, California, a sanctuary city, NYPD officers participated in Ragbir’s detention. An apparent violation of an ordinance against cooperating with ICE that they denied in front of a New York City Council oversight hearing, despite the fact that one of the questioning councilors was arrested while protesting Ragbir’s detention.

That the argument by an NYPD lawyer amounted to semantics over what constituted cooperation made it clear just how far the NYPD seems to be willing to go to support the notion of a sanctuary city, whether or not the officers actions were in violation of the letter of the ordinance. Having the contours of the NYPD’s position fleshed out in the wake of the incident is strategically valuable, but also incredibly worrying when taken in the context of a case that has also revealed that ICE is intentionally targeting immigration activists for deportation, a practice which is the subject of a lawsuit against the agency. 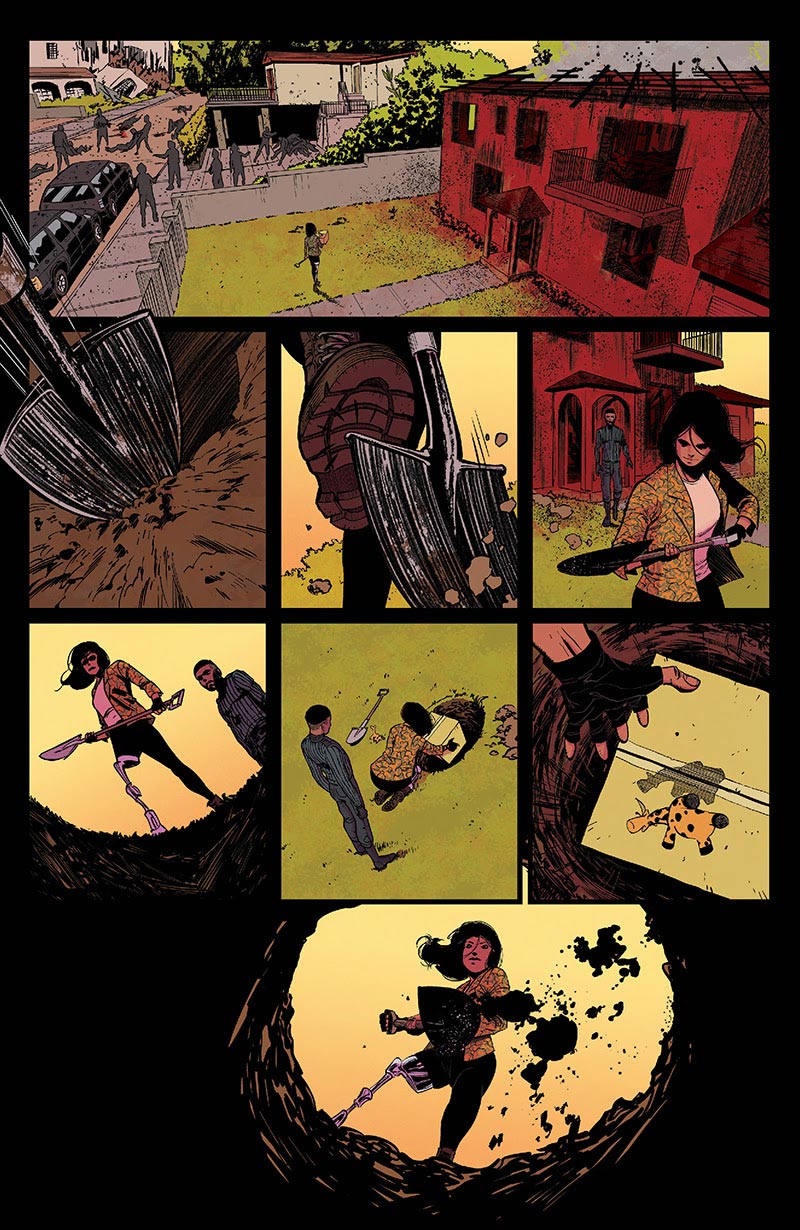 All of this has been happening against the backdrop of U.S. Citizen and Immigration Services changing its mission statement from “USCIS secures America’s promise as a nation of immigrants by providing accurate and useful information to our customers, granting immigration and citizenship benefits, promoting an awareness and understanding of citizenship, and ensuring the integrity of our immigration system,” to “US Citizenship and Immigration Services administers the nation’s lawful immigration system, safeguarding its integrity and promise by efficiently and fairly adjudicating requests for immigration benefits while protecting Americans, securing the homeland, and honoring our values,” under its new director, Trump appointee L. Francis Cissna, as initially reported by The Intercept.

The new mission statement most notably omits the phrase “nation of immigrants,” referencing the John F. Kennedy book of the same title. While that characterization of the country erases the experiences of both the indigenous peoples subjected to genocide to make way for settler colonialism and the forced displacement inherent to the transatlantic slave trade, it represented a step forward towards a reckoning with those histories and a recognition of America’s unique position in the world as a nation shaped by waves of displaced peoples and hopeful immigrants.

The new mission statement is a stark reflection of the nativist rhetoric of the Trump administration and its callous disregard for any conception of American history other than Manifest Destiny. 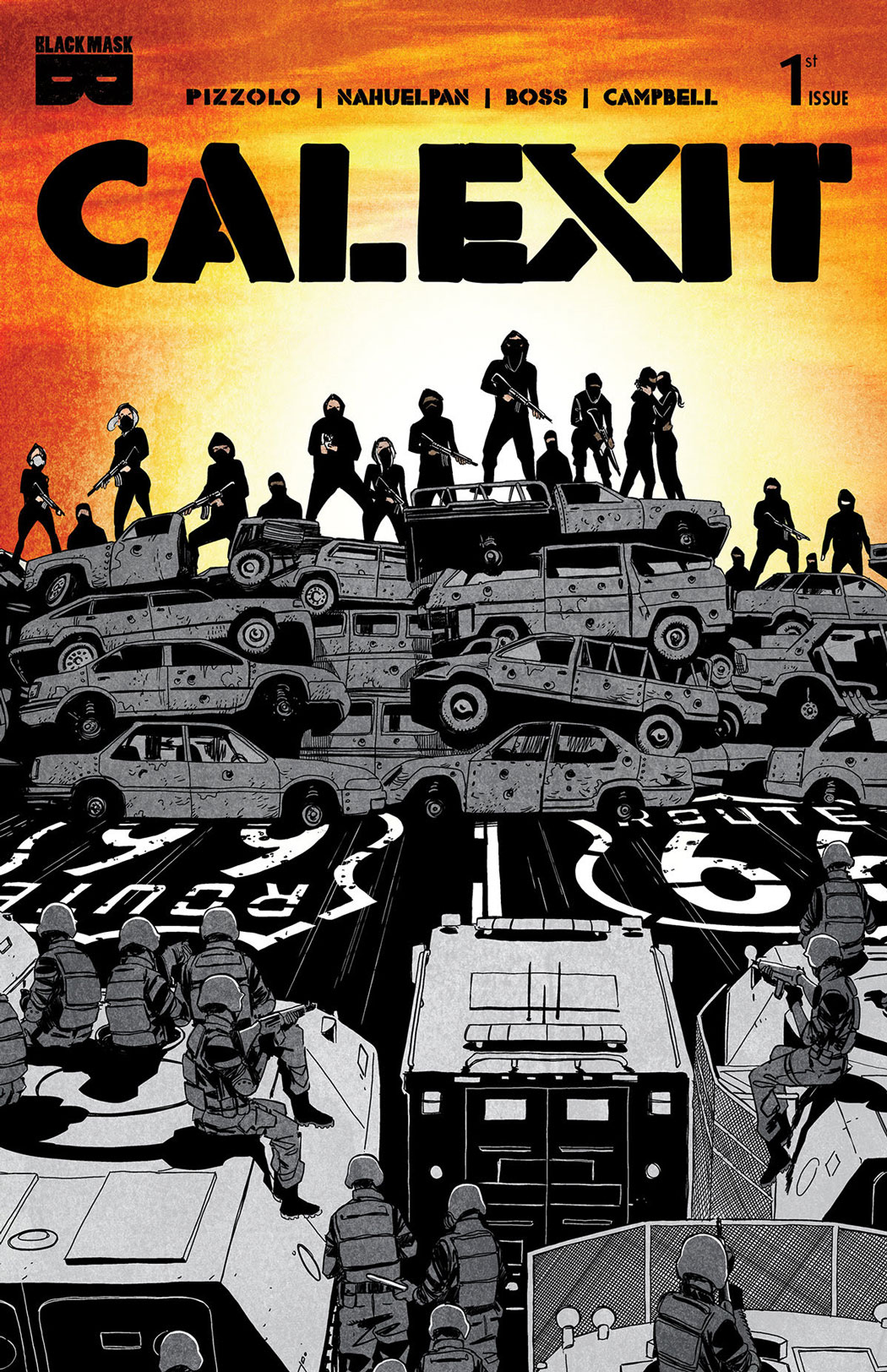 The events of the weeks leading up to Calexit’s second issue don’t have to mean that we’re hurtling towards armed standoffs in the Hollywood hills for its dystopian projections to be productive. What it does mean is that attempting to locate and outline the next potential political and/or social crisis through fiction is a strategy that can still bear fruit when the component parts are carefully thought out, a medium that can adapt to the pace of contemporary life is used, and the stars align correctly.

The structure and nature of Calexit as a comic allows it to do a lot more than illuminate an issue whose primacy was previously in doubt in the mainstream, though. Just as Pizzolo was looking ahead to immigration as a defining political issue with far reaching implications for the nation when he came up with the story, he also started the conversation around organizing and canvassing for the 2018 midterm elections in the backmatter of the debut issue, before the dust of the 2016 presidential election had settled, and used it to start a SuperPAC benefitting first time, non partisan candidates.

It’s the aspect that makes Calexit, and the philosophy behind Black Mask Studio such a refreshing and innovative presence in comics. In an era where comics have become a medium for explicitly political speech and symbols of crass consumption like variant covers are being increasingly deputized to raise funds for non profit organizations like Planned Parenthood and Human Rights Campaign, Matteo Pizzolo has stepped up to find the most daring and innovative ways to take the next step forward from conventional thinking, coming closer than anyone to transforming the act of making and selling a comic into actual praxis. 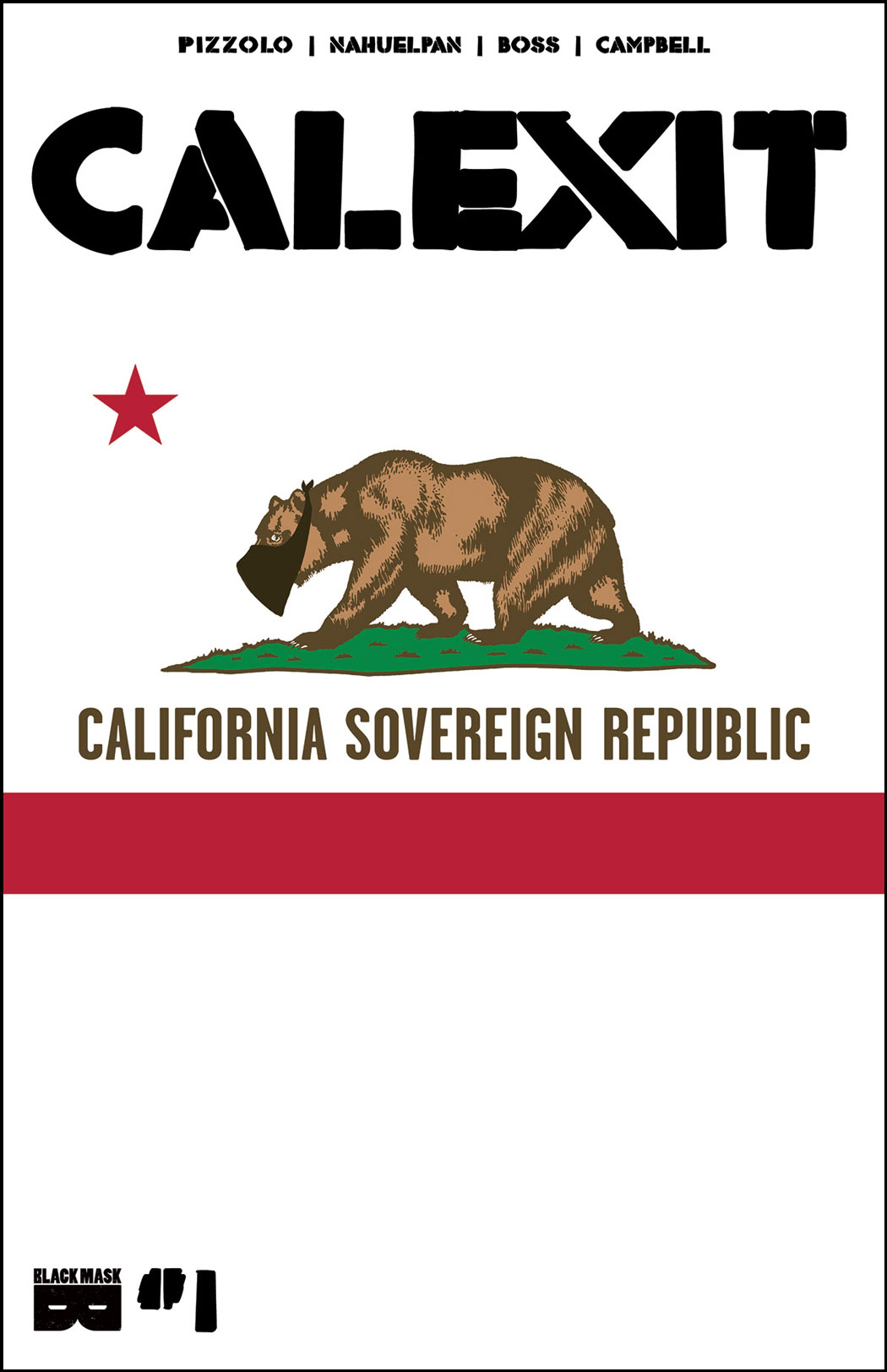 Comics is a medium whose modern history has been shaped by trailblazers and troublemakers who dreamed a better tomorrow into existence, a fact that we are slowly but surely reawakening ourselves to in our current moment of strife. Joe Simon and Jack Kirby, under threat of violence, dared to dream of an embodiment of America literally socking it to Hitler at a time when Nazi sympathizers could fill Madison Square Garden.

While clearly operating in the same spirit and just as passionately seeking out new ways for leveraging comics towards their aims, Matteo Pizzolo and Amancay Nahuelpan are asking a lot less of us than Joe Simon, Jack Kirby, or Grant Morrison ever have. Instead of invading an entire continent or embracing the postmodern esoteric tradition to shape an incoming millennium, all Nahuelpan and Pizzolo are asking us to do is put our hearts, minds, dollars, and votes into living up to the inscription at the foot of the motherfucking Statue of Liberty.