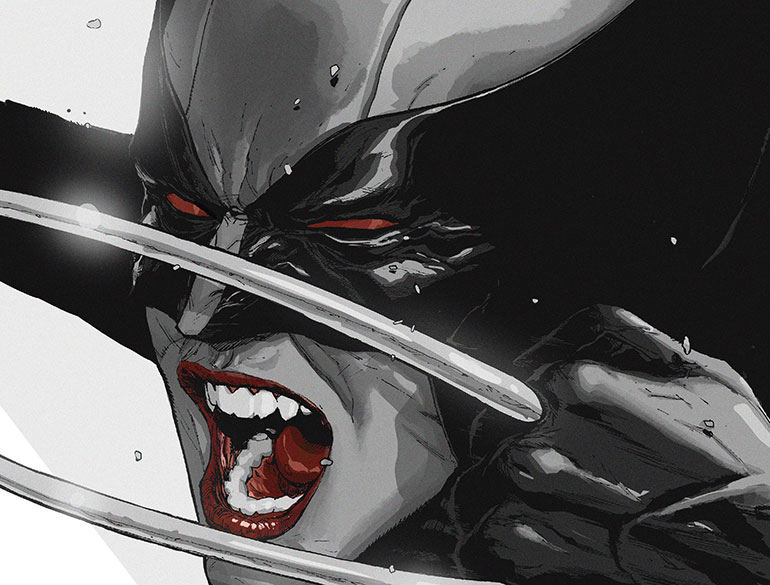 Choosing precedence, legacy, and continuity as the guiding principles behind my best ofs this year left me with very little in the way of options for best series. They all point directly to All New Wolverine, which has been one of the only current monthly series over a year old that you can set your watch by. Harley Quinn and Batman being the other two.

One of the most fascinating and rewarding things about All New Wolverine is that series writer Tom Taylor’s steadiness and reliability feels like a throwback to a mostly bygone era straddling the late 1990s and early 2000s when writers like Chuck Dixon, Alan Davis, Ed Brubaker, Gail Simone, and Greg Rucka were able to play the long game, delivering issues that were worthwhile all on their own with regularity. They didn’t fall into the third issue in a five issue written for trade arc doldrums. They didn’t open with flashy gimmicks that the rest of the arc, let alone series, couldn’t live up to. 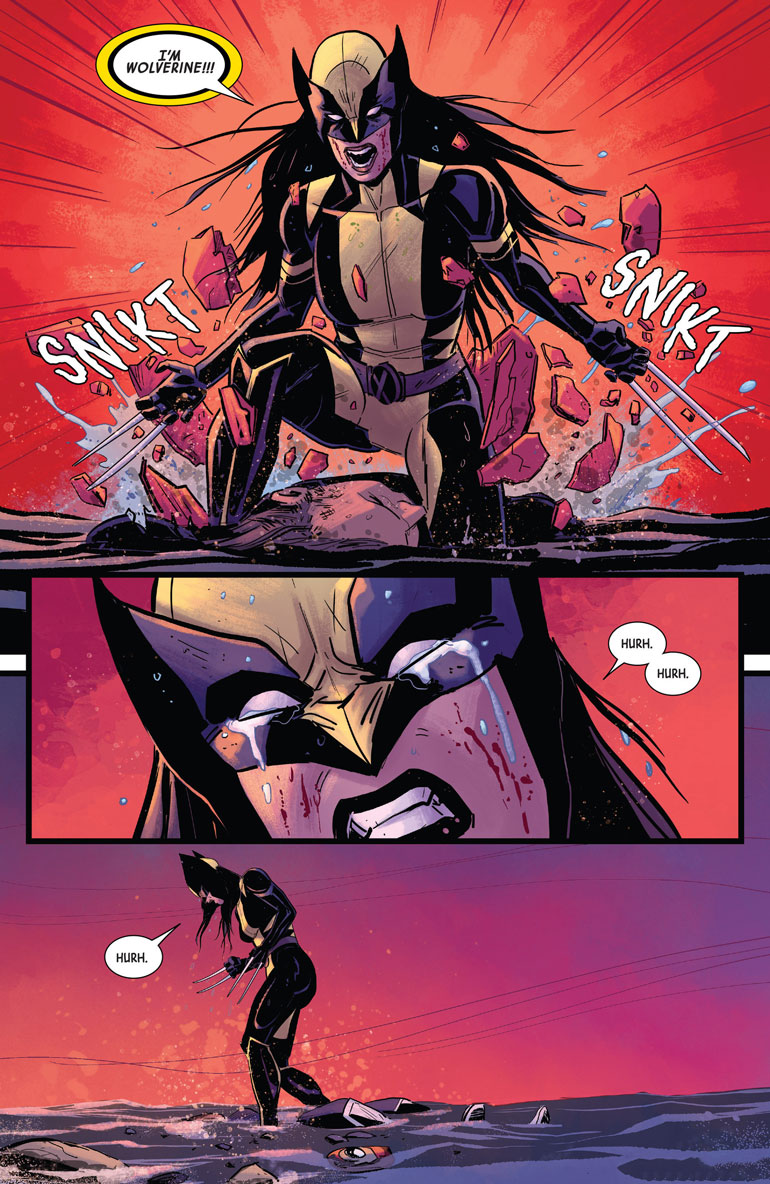 The nature of the direct market and how the industry works has changed a great deal since then, so there’s a lot of reasons behind why comics like the early days of Birds of Prey, Gotham Central, or even longform events like Batman: No Man’s Land or Knightfall exist anymore, which is reason alone to focus in on All New Wolverine. For whatever reason, the title has been able to enjoy an equivalent level of non intervention to Scott Snyder and Greg Capullo’s Batman run at DC, deviating only briefly for a pseudo tie-in to Civil War II and flat out ignoring Secret Empire, which is a significant privilege, but the fact is that Taylor possesses the toolkit necessary to exploit it.

2017 wasn’t a flawless victory for Taylor, his collaborators, or All New Wolverine as a title, but that’s also why it’s earned this distinction from me. This year was a stress test for the creative team to carry the title beyond its initial year of high powered cameos and salad days of David Lopez and David Navarrott interiors behind showstopping Bengal covers, which is a significant feat for a (frequently) double shipping book. There were times this year that arcs felt rushed and artistic ambitions were sacrificed to deadlines, but Taylor’s singular focus remained on his mission to rebuild Laura and develop Gabby, keeping their dynamics and advancement as characters as the one thing you could count on month after month. 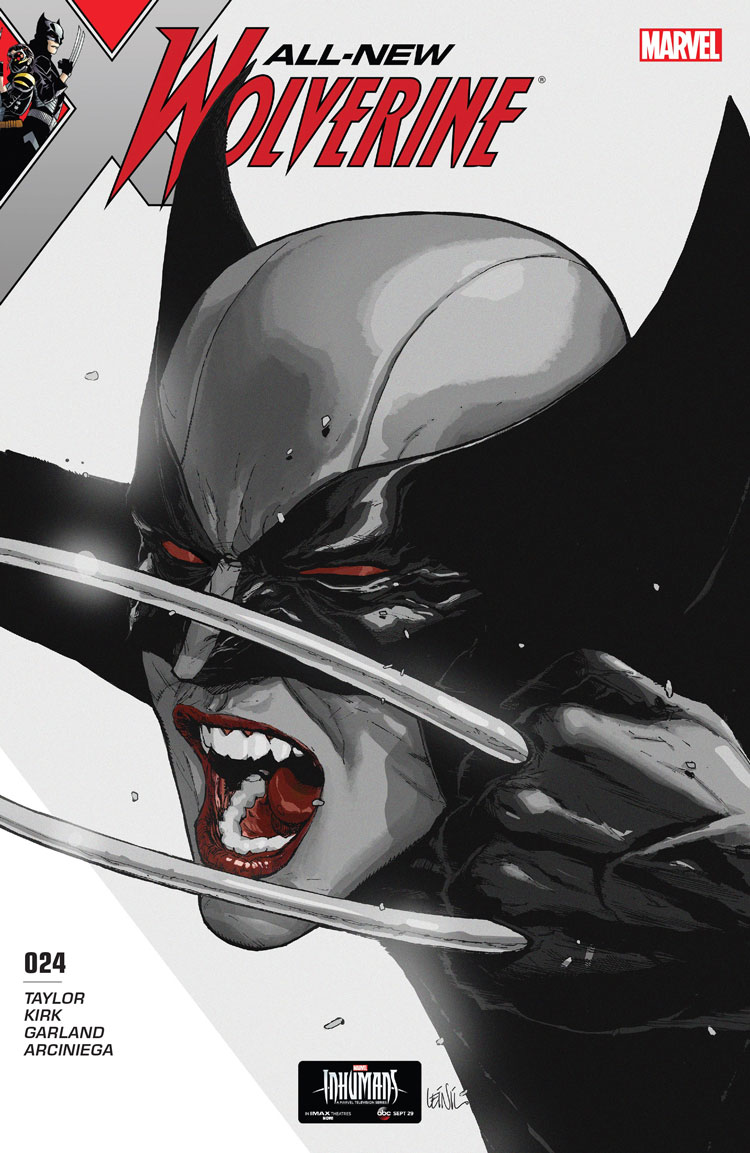 It’s a powerful argument for why double shipping, intermittently or not, just plain shouldn’t happen unless there’s an infrastructure in place to match what Amanda Conner and Jimmy Palmiotti were able to erect in order to support their rotating regular artists John Timms and Chad Hardin on Harley Quinn. Either way, the title lost traction early in the year as it bounced back and forth between Nicole Virella and Djibril Morissette-Phan before stabilizing under Leonard Kirk at the debut of the Immune arc through to the end of the Brood arc, who in turn was replaced by Juan Cabal for the current Orphans of X arc.

The overall impact of the rapidly shifting pencillers didn’t really hit home until Cabal joined the team, highlighting both that 2017 had been marked by a lack of a coherent style for the series, and just how much the series is strengthened by an artistic presence as consistent and incentivized as Taylor is as writer. While there was an incredible emotional energy behind All New Wolverine’s debut year that is hard to quantify and can’t be matched, there’s also no question that Cabal has pushed the series to an artistic watershed moment. 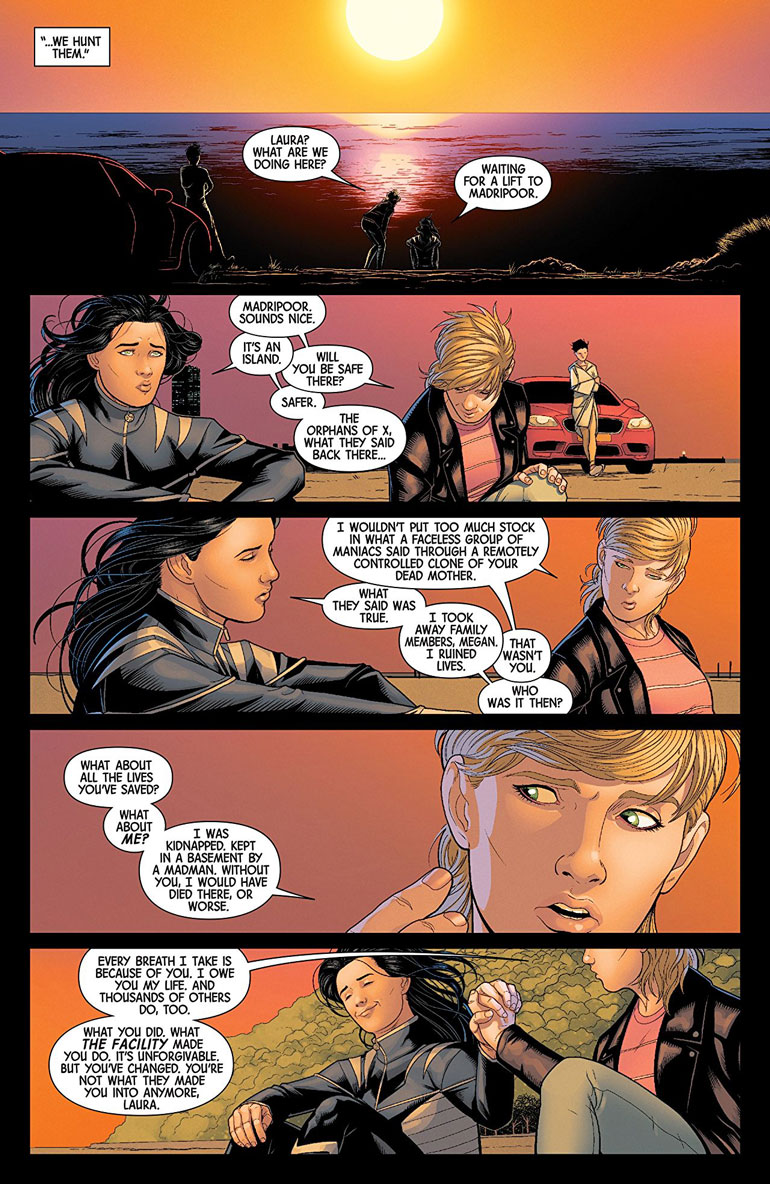 While Navarrot and Lopez delivered phenomenal, kinetic action sequences in the series debut, Cabal has brought All New Wolverine into more ambitious and stylistic territory than ever before. Whether it was under the Davids, Virella, Morissette-Phan, or Kirk, Talyor has kept the layouts clear, legible, and fairly unambitious, but with Cabal, we’re starting to see novel uses of the page like Laura walking over a plane depicting her personal history, or Daken’s figure swirling into a cup of coffee.

This isn’t radical, groundbreaking stuff compared to where the medium is overall, but it absolutely is taking Laura into forms of visual storytelling that she’s only ever truly been exposed to in Skottie Young’s New X-Men issues or Kathryn Immonen and Sarah Pichelli’s Pixie Strikes Back. Cabal is also particularly notable for his role in effecting the Daken renaissance that Kevin Wada and Sina Grace began with his re-debut in Iceman, reigning in his ridiculous mohawk for a credible, stylish topknot and cartooning that clearly communicates his mixed race.

These are small, incremental, and long overdue steps that, alongside Taylor’s writing, amount to a spectacular watershed year for a group of characters that, if we’re being completely honest, don’t really deserve it. Which is almost identical to my description of Logan as being the cinematic send off that no one earned and everyone deserved. 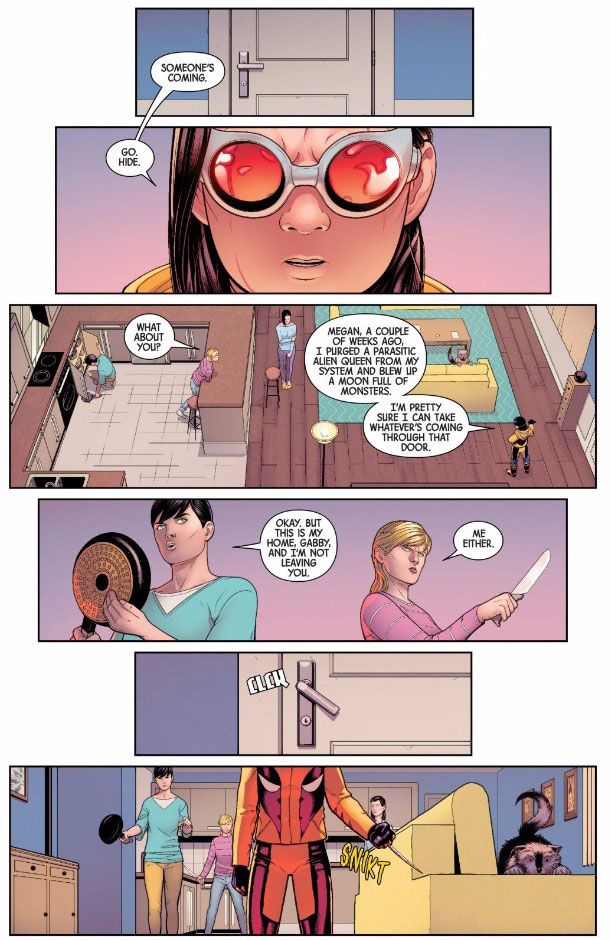 I remember feeling remorseful when more than one friend said that my review of the debut issue threatened to make them an X-23 fan, because Laura is a character who was deeply flawed from conception and has been, for the majority of her appearances, poorly and unthinkingly executed. I don’t feel that remorse any more, but what has to be understood about Laura is that she is, along with Cassandra Cain, is the most prominent example of probably the ugliest and most exploitative archetype that superhero comics has had the misfortune of birthing.

I can certainly understand that the genesis of the archetype typically referred to as “assassin babies,” children or teens raised from birth to be trained killers, is a pretty logical, if unthinking extension of Luc Besson characters like The Professional’s Mathilda or the eponymous La Femme Nikita. What I can also understand, is that X-23 was translated from animation to comics as a self mutilating victim of sex trafficking in NYX and has, more often than not, been depicted as a child undergoing massive, violent trauma for the entertainment of an ostensibly adult audience.

When Tom Taylor started All New Wolverine, he joined a cresting wave of empathetic interrogations of the archetype that included Patrick Gleason’s Robin: Son of Batman and the re-introduction of Cassandra Cain as “Orphan” in Batman and Robin Eternal. That’s what makes All New Wolverine consequential beyond the X-Men and even Marvel. It’s the interrogation of both an archetype and an era. 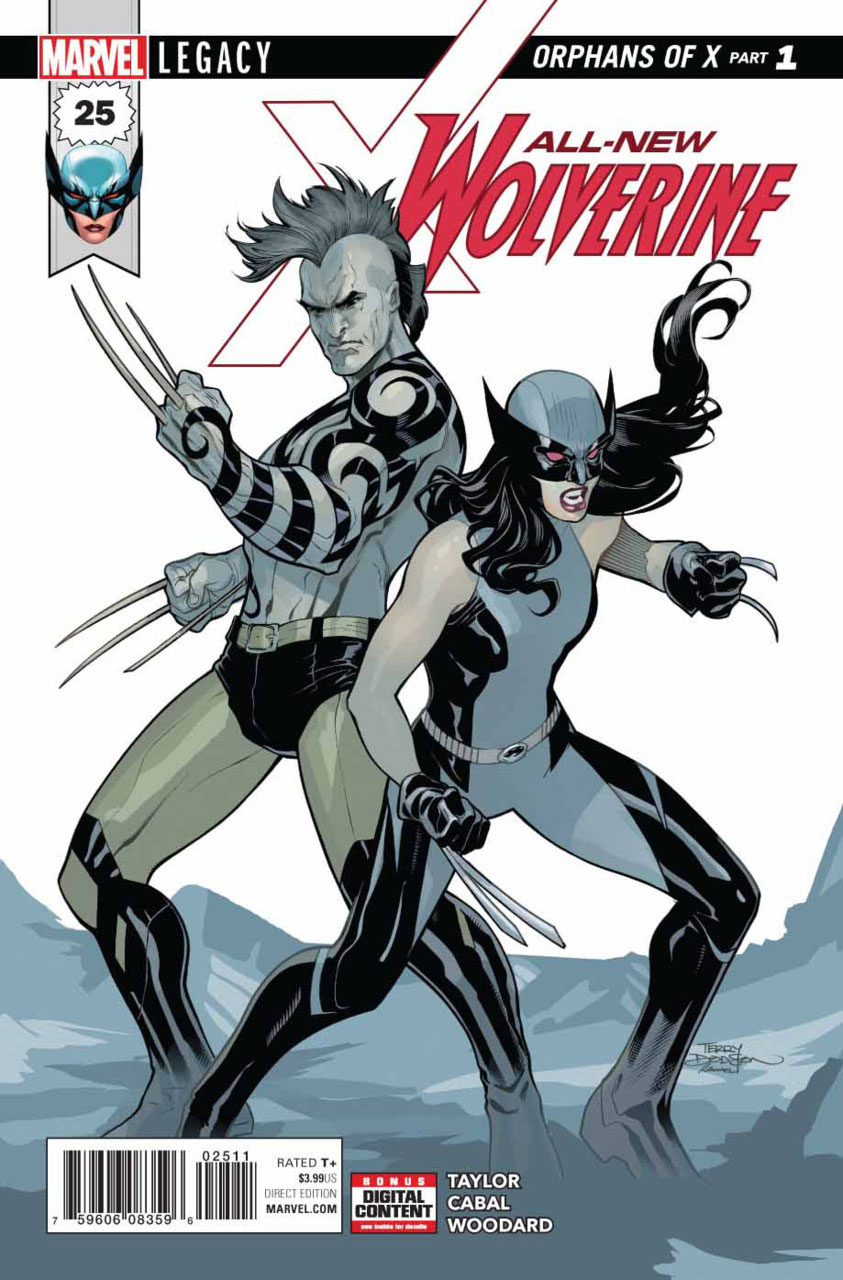 It’s an interrogation that comes alive the strongest in Gabby, the clone of a clone that Laura has come to embrace as something in between a little sister and a daughter. For Laura, Gabby is the fulfillment of the biggest cornerstone of Logan’s legacy: being a reluctant, dysfunctional, but ultimately loving parental figure. It’s a significant transition for Laura as a character that both calls on and adds to X-Men lore in a deeply satisfying way, but Gabby, in her own right, for Laura as a victim of being dehumanized as a clone, for Taylor as a writer subverting the archetype, and for the audience, is a second chance to treat childhood trauma seriously, to experience a gruesome world through innocent eyes, and to have something worth protecting.

The past year has been one of quiet emotional rehabilitation for Laura, but it’s also been one of ascendancy and agency for Gabby, who has grown from darkly comic tension breaker to the beating heart of the series. When Taylor began laying the groundwork for conceiving of Laura, Gabby, Daken, Old Man Logan, and Deadpool as a family unit in the Immune arc, it was Gabby who provided the glue, catching Deadpool up on her unfortunate history with Old Man Logan and treating his scars with empathy, codifying him once and for all as her weird uncle. It was a significant character moment for Gabby, but it also hinged on Taylor bringing to life the genuine pathos and fundamental naivety in Deadpool that has only ever been communicated effectively by Fabian Nicieza, Gail Simone, and Rick Remender. 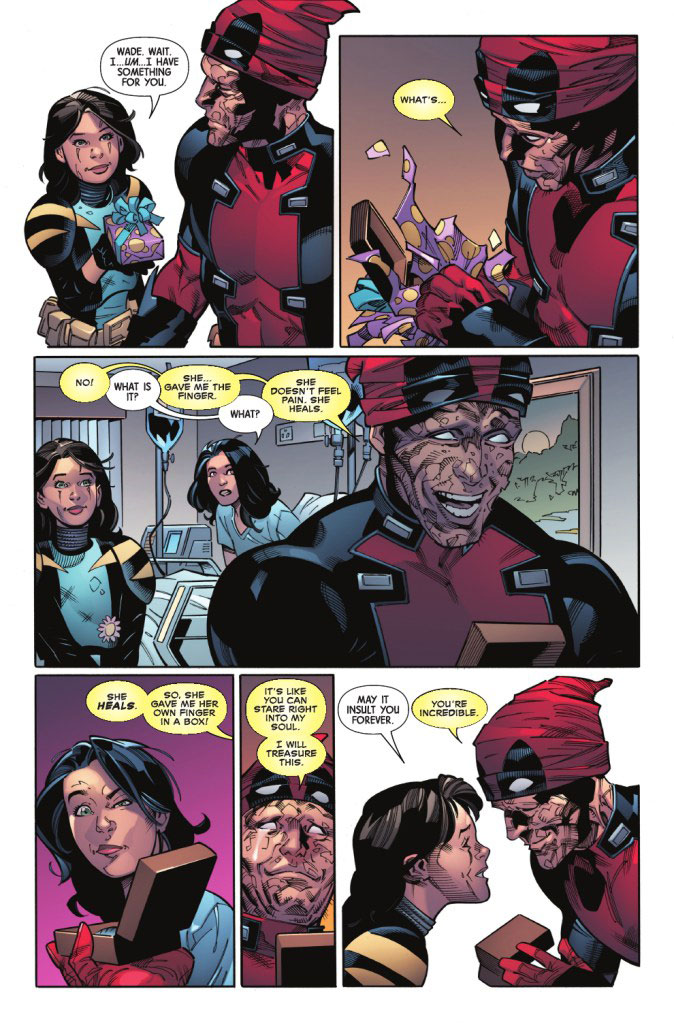 The high water mark for the series, for this year and arguably the entire run so far, was similarly Gabby focused and also functioned to cement family ties. In the latest issue, #28, Gabby complains that she needs a superhero name after a conversation with Danger, the anthropomorphization of the X-Mansion’s Danger Room. The solution comes from the least likely source imaginable: Daken. Gabby getting her own superhero name is both the most triumphant moment for the series and for all of superhero comics of the year, but it also subtly represents the validation of familial bonds between her and Daken, her narcissistically murderous, biracial, bisexual uncle.

The panel celebrating Gabby’s naming is also the purest distillation of the series, depicting her surrounded by Cabal’s reinterpretations of the most classic Wolverine covers with Gabby in place of Logan and “Honey Badger” in place of “Wolverine.” That juxtaposition of fidelity to the deepest depths of Wolverine history and the irreverent way that Taylor and his collaborators wield it is the fundamental virtue of the series that has been in place since the apocryphal flashback to Laura’s X-Force days in the debut issue. 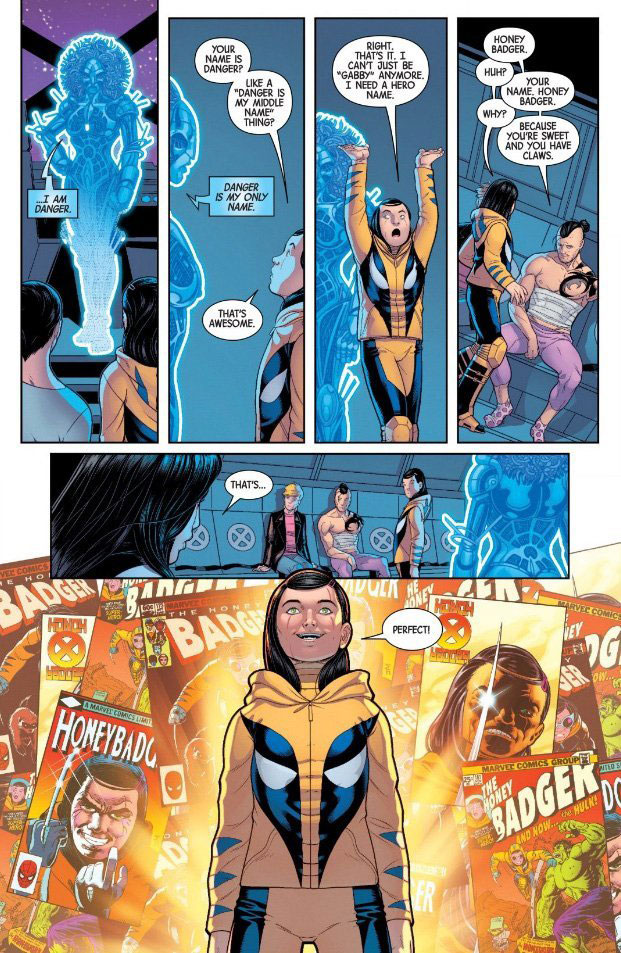 All New Wolverine is many things, and disentangling its many component parts is a project of gargantuan dimensions, but the simple, fundamental truth is that it fully and completely embodies the kind of storytelling that justifies the continued investment in superhero continuities with longer lifespans than most of its readership.