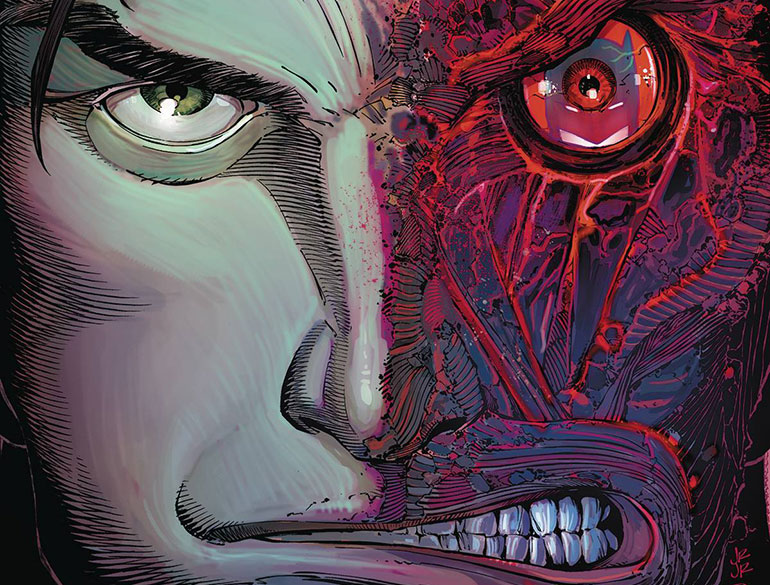 At this point, it should be pretty clear that I’ve been messing around a lot with my criteria for my best of the year picks this time around. Especially in picking Mark Doyle for what he’s done up until now and Trungles for a year where he barely had a presence in the direct market.

Part of it is because I’ve felt more disconnected than ever from comics as an industry and a community this year. But another part is that a lot of what’s played out this year had me digging back into the archives of mine and others’ writing to trace the origins of the many chickens that have been coming home to roost over the last few months.

It’s made me think about ideas like precedence, legacy, and continuity more than I ever have, so I started to think of these picks not as moments frozen in amber, but signposts that point both backwards and forwards in time. There’s probably a point to be made about the etymology of “January” having to do with Janus, a guy with two faces who looks backwards and forwards simultaneously, but I’ll leave that to an actual nerd to expand on. 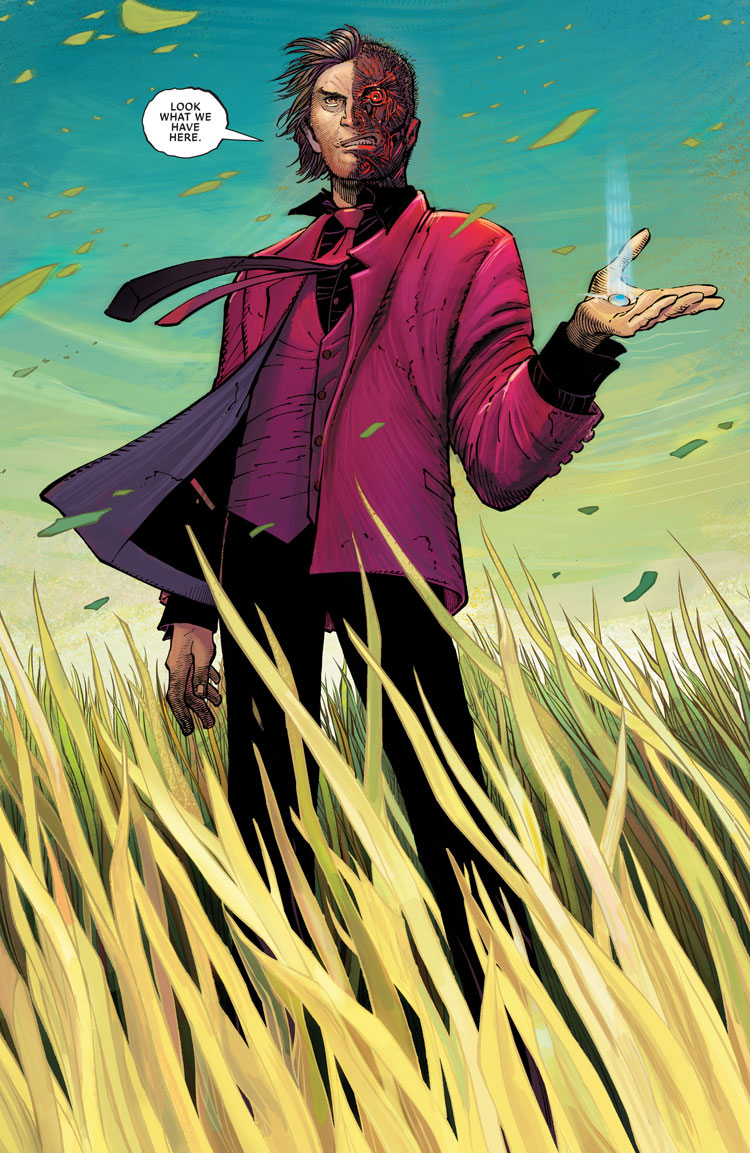 Choosing Scott Snyder is a bit of a foregone conclusion after having picked Mark Doyle as best editor, because the two are inextricable in considering the Batman group’s evolution into the axis mundi of the direct market.

There was, as I mentioned in my rationale for Doyle, a rare and laudable policy of non-interference in Snyder and Greg Capullo’s unprecedented Batman run, but the real story isn’t that Doyle was a saint for resisting the urge to draw the title into byzantine cash grab crossovers. It’s that Snyder and Doyle found novel ways to take the heat that Batman was generating and use it as an incubator for new characters and creators without compromising the reading experience or cynically exploiting the readership.

Snyder has consistently lent his energy and the selling power of his name to projects explicitly created to spotlight and develop a host of new (and new to DC) writing talent including Marguerite Bennett, James Tynion IV, Genevieve Valentine, Tim Seeley, and Tom King. It seems like a fairly basic or even obvious tactic for business building, but its one that DC has rarely committed this level of effort to and Marvel has been mercilessly failing at over the same timespan. 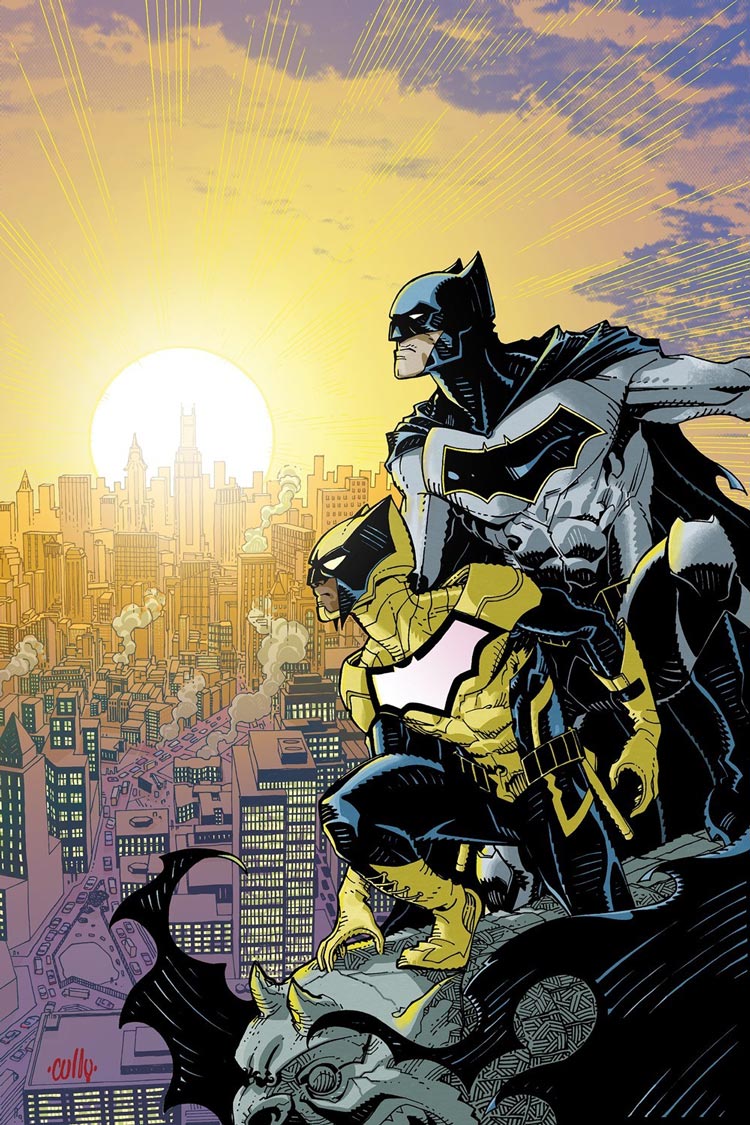 The disparity is most easily understood in comparing the ascendancy of Duke Thomas with the steady slide into entropy that Miles Morales has been subjected to. There’s no question that Batman and the Signal and Tony Patrick being granted partial custody of Duke is a long time coming, given that the first black Robin debuted at roughly the same time that Mark Doyle joined the Batman group. That said, Duke has been the focus of a massive collaborative project since his re-emergence in the wake of Endgame, largely, but not exclusively, thanks to Lee Bermejo, Khary Randolph, Jorge Corona, Trish Mulvihill, and Ken Lopez’s We Are Robin laying the groundwork for a complete transformation of Robin as a concept.

By contrast, while Brian Michael Bendis was an epochal, generation shaping influence at Marvel whose impact on the medium cannot be underplayed, both Marvel and he have come under consistent fire for lacking a clear succession plan for Miles’ primary presence in the Marvel lineup to be written and drawn by Black, or more specifically, Afro-Latinx creators.

DC is still certainly open to criticism for the span that Duke’s ascendancy has taken and for the fact that Snyder is both co-writing Batman and the Signal and that it’s currently being solicited as a mini-series, but there’s something to be said for how Duke has been given push after push behind major inter-title events like Endgame and Metal, while also being attached to Snyder’s All Star Batman as a backup. Maybe it’s being overly precious or paternalistic, maybe it’s ensuring that Batman and the Signal has all the momentum that the company can put behind it. That’s up to interpretation, and it’s pretty clear which direction I’m tilting towards. 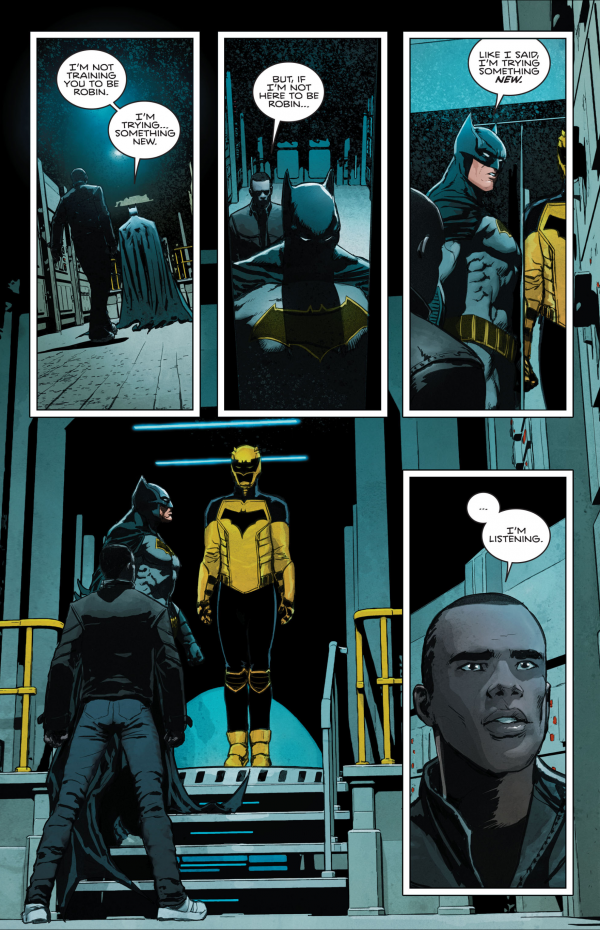 While Snyder has been a key element to Duke being slingshotted through 2017 into what will hopefully be a truly ascendant 2018, it doesn’t do justice to his own year by any stretch of the imagination.

When he completed his roughly sixty issue run on Batman, Snyder and Capullo left the largest and most remarkable legacy on the character since Frank Miller and David Mazzucchelli turned in Batman: Year One. Snyder was the beneficiary of many privileges, not least Capullo’s consistent presence, in achieving his historic run, but far from satisfying an itch, it seems to have left him hungry for more. While leaving room for the cleanest and most efficient handoff in modern history when Tom King took the reigns following Rebirth, Snyder plunged even deeper into the Batman world by simply changing focus. 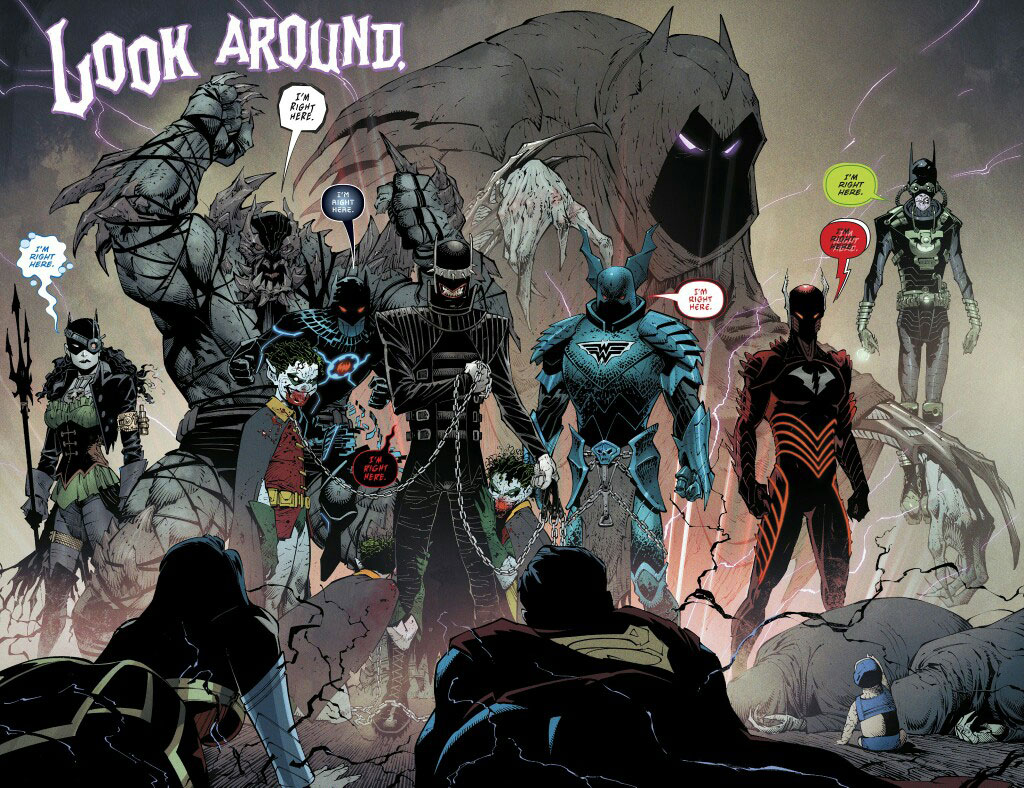 If there’s one defining trait to Snyder’s Batman run, it’s that, beginning even earlier in The Black Mirror, he completely reshaped and redefined Gotham, creating a cohesive, consistent environment out of it for probably the first time in history. It’s an accomplishment, much like Duke Thomas’ ascendancy, that was a group effort Snyder was the epicenter of rather than the singular originator of, spreading out into Batman Eternal, Batman & Robin Eternal, Catwoman, Batgirl, We Are Robin, and Gotham Academy.

Viewed through that lens, that Snyder could still have the hunger and the material to stay laser focused on Batman following a manga level decompressed epic becomes a lot more understandable. All Star Batman shifted his focus from the macro, on Gotham as a city and Bruce’s outsized impact on the community, to the micro, executing close readings on an ever rotating cast of Bruce’s villains.

It’s inarguable that the watershed moment for All Star Batman was 2016’s Two Face arc, in which Snyder executed a powerful re-imagining of Two Face’s condition as an empathetic metaphor for bipolar disorder, but 2017’s offerings stretched Snyder’s imagination into novel and timely perspectives on some of the most unlikely villains in the Gotham stable like Mad Hatter, Ra’s Al Ghul, and most deliciously, the human 4Loko can we know and love as Hush. 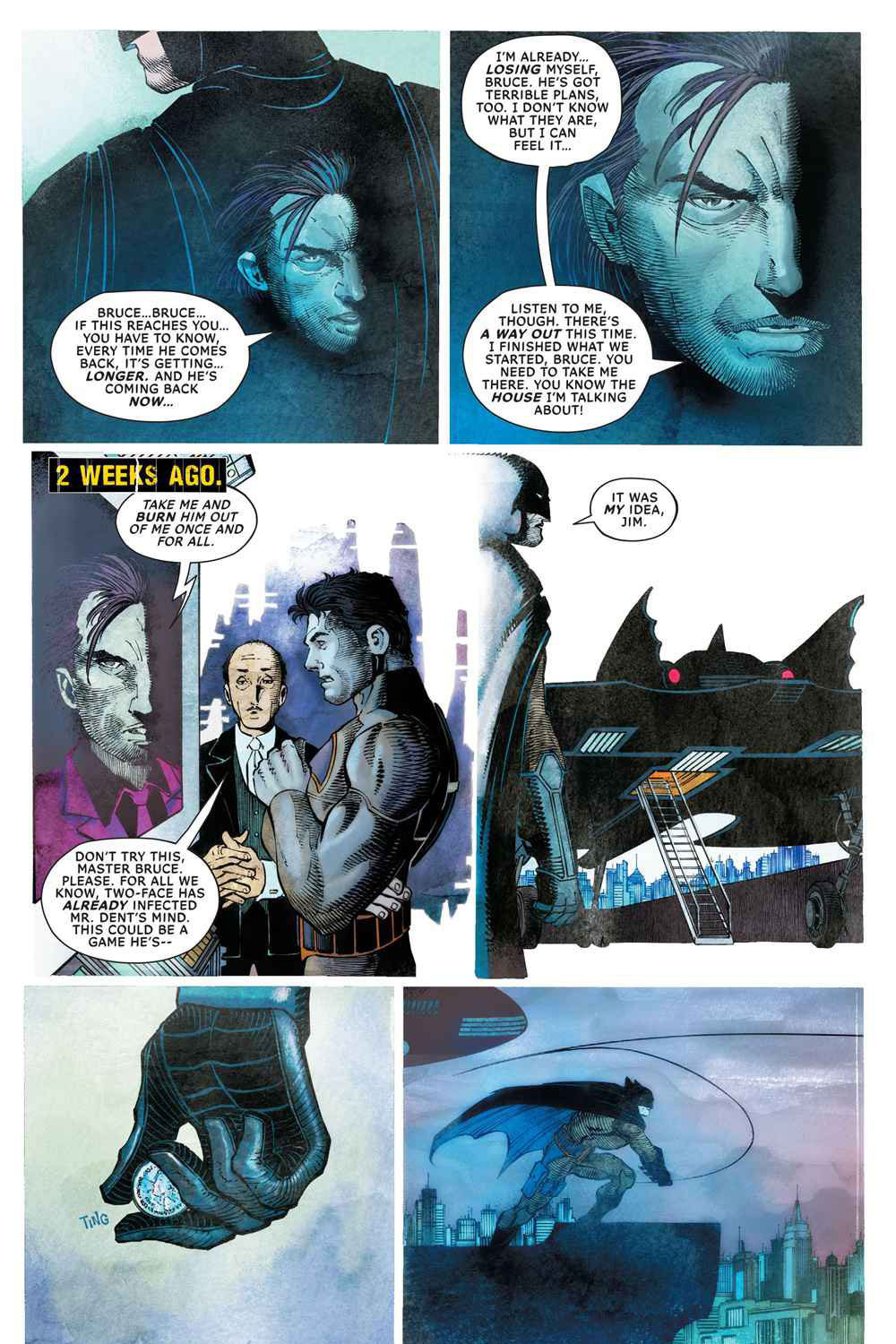 What makes Scott Snyder stand out to me is that by all appearances, he didn’t just read Grant Morrison’s conclusion that Batman was a collaborative effort from the beginning as an ethos to approach the character with, he also saw it as something to model his career after.